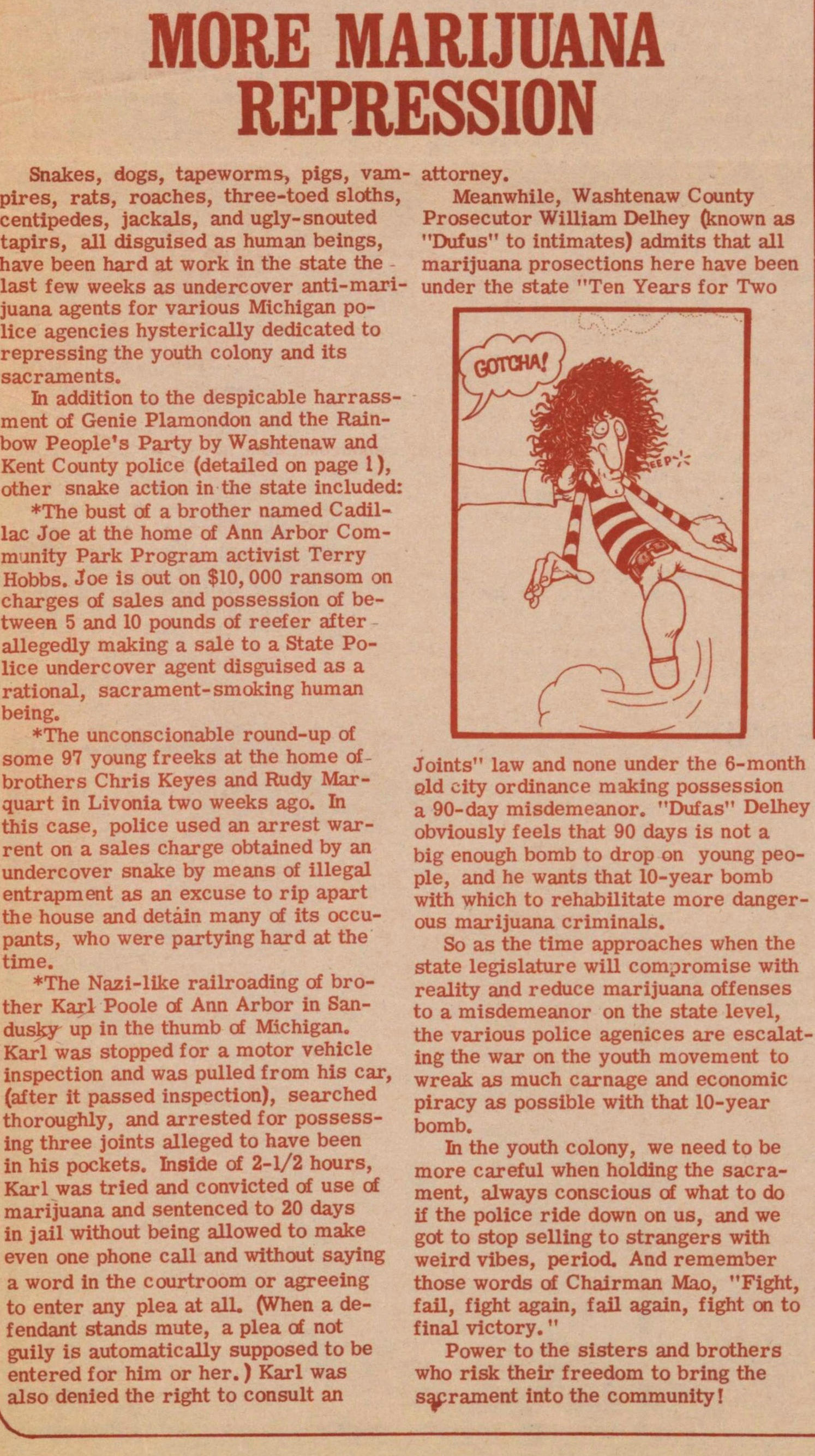 Snakes, dogs, tapeworms, pigs, vampires, rats, roaches, three-toed sloths, centipedes, jackals, and ugly-snouted tapirs, all disguised as human beings, have been hard at work in the state the last few weeks as undercover anti-marijuana agents for various Michigan police agencies hysterically dedicated to repressing the youth colony and its sacraments.

In addition to the despicable harassment of Genie Plamondon and the Rainbow People's Party by Washtenaw and Kent County police (detailed on page 1), other snake action in the state included:

*The bust of a brother named Cadillac Joe at the home of Ann Arbor Community Park Program activist Terry Hobbs. Joe is out on $10,000 ransom on charges of sales and possession of between 5 and 10 pounds of reefer after allegedly making a sale to a State Police undercover agent disguised as a rational, smoking human being.

*The unconscionable round-up of some 97 young freeks at the home of brothers Chris Keyes and Rudy Marquart in Livonia two weeks ago. In this case, police used an arrest warrant on a sales charge obtained by an undercover snake by means of illegal entrapment as an excuse to rip apart the house and detain many of its occupants, who were partying hard at the time.

*The Nazi-like railroading of brother Karl Poole of Ann Arbor in Sandusky up in the thumb of Michigan. Karl was stopped for a motor vehicle inspection and was pulled from his car, (after it passed inspection), searched thoroughly, and arrested for possessing three joints alleged to have been in his pockets. Inside of 2-1/2 hours, Karl was tried and convicted of use of marijuana and sentenced to 20 days in jail without being allowed to make even one phone call and without saying a word in the courtroom or agreeing to enter any plea at all. (When a defendant stands mute, a plea of not guilty is automatically supposed to be entered for him or her.) Karl was also denied the right to consult an attorney.

Meanwhile, Washtenaw County Prosecutor William Delhey (known as "Dufus" to intímates) admits that all marijuana prosecutions here have been under the state "Ten Years for Two Joints" law and none under the 6-month old city ordinance making possession a 90-day misdemeanor. "Dufas" Delhey obviously feels that 90 days is not a big enough bomb to drop on young people, and he wants that 10-year bomb with which to rehabilitate more dangerous marijuana criminals.

So as the time approaches when the state legislature will compromise with reality and reduce marijuana offenses to a misdemeanor on the state level, the various police agencies are escalating the war on the youth movement to wreak as much carnage and economic piracy as possible with that 10-year bomb.

In the youth colony, we need to be more careful when holding the sacrament, always conscious of what to do if the police ride down on us, and we got to stop selling to strangers with weird vibes, period. And remember those words of Chairman Mao, "Fight, fail, fight again, fail again, fight on to final victory."

Power to the sisters and brothers who risk their freedom to bring the sacrament into the community!