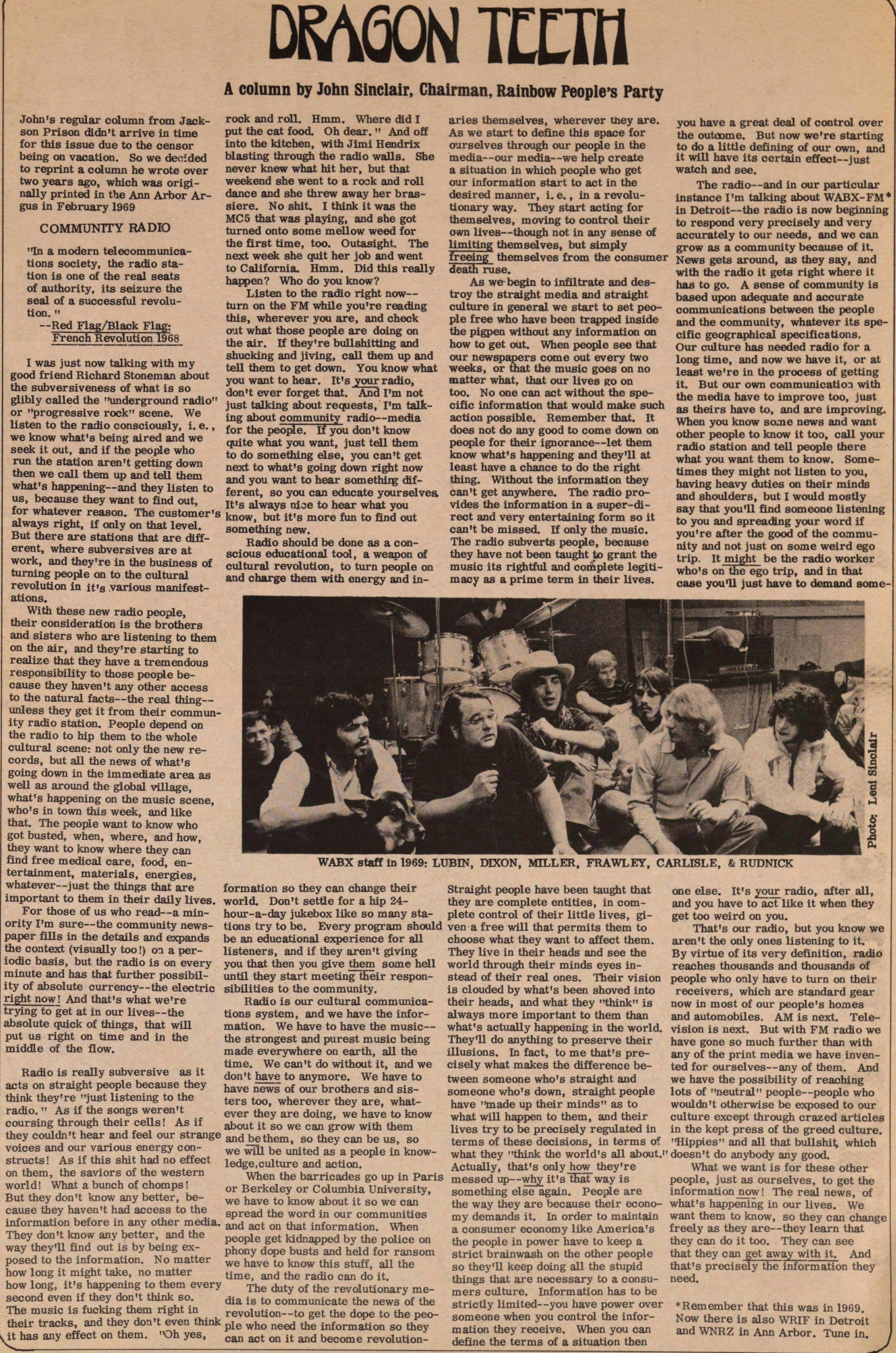 John's regular column from Jackson Prison didn't arrive in time for this issue due to the censor being on vacation. So we decided to reprint a column he wrote over two years ago, which was originally printed in the Ann Arbor Argus in February 1969

"In a modern telecommunications society, the radio station is one of the real seats of authority, its seizure the seal of a successful revolution."

I was just now talking with my good friend Richard Stoneman about the subversiveness of what is so glibly called the "underground radio" or "progressive rock" scene. We listen to the radio consciously, i.e., we know what's being aired and we seek it out, and if the people who run the station aren't getting down then we call them up and tell them what's happening - and they listen to us, because they want to find out, for whatever reason. The customer's always right, if only on that level. But there are stations that are different, where subversives are at work, and they're in the business of turning people on to the cultural revolution in ifs various manifestations.

With these new radio people, their consideration is the brothers and sisters who are listening to them on the air, and they're starting to realize that they have a tremendous responsibility to those people because they haven't any other access to the natural facts -the real thing- unless they get it from their community radio station. People depend on the radio to hip them to the whole cultural scene: not only the new records, but all the news of what's going down in the immediate area as well as around the global village, what's happening on the music scene, who's in town this week, and like that. The people want to know who got busted, when, where, and how, they want to know where they can find free medical care, food, entertainment, materials, energies, whatever - just the things that are important to them in their daily lives.

For those of us who read - a minority I'm sure - the community newspaper fills in the details and expands the context (visually too!) on a periodic basis, but the radio is on every minute and has that further possibility of absolute currency - the electric right now! And that's what we're trying to get at in our lives- the absolute quick of things, that will put us right on time and in the middle of the flow.

Radio is really subversive as it acts on straight people because they think they're "just listening to the radio." As if the songs weren't coursing through their cells! As if they couldn't hear and feel our strange voices and our various energy constructs! As if this shit had no effect on them, the saviors of the western world! What a bunch of chomps! But they don't know any better, because they haven't had access to the information before in any other media. They don't know any better, and the way they'll find out is by being exposed to the information. No matter how long it might take, no matter how long, it's happening to them every second even if they don't think so. The music is fucking them right in their tracks, and they don't even think it has any effect on them. "Oh yes, rock and roll. Hmm. Where did I put the cat food. Oh dear." And off into the kitchen, with Jimi Hendrlx blasting through the radio walls. She never knew what hit her, but that weekend she went to a rock and roll dance and she threw away her brassiere. No shit. I think it was the MC5 that was playing, and she got turned onto some mellow weed for the first time, too. Outasight. The next week she quit her job and went to California. Hmm. Did this really happen? Who do you know?

Listen to the radio right now - turn on the FM while you're reading this, wherever you are, and check out what those people are doing on the air. If they're bullshitting and shucking and jiving, call them up and tell them to get down. You know what you want to hear. It's your radio, don't ever forget that. And I'm not just talking about requests, I'm talking about community radio - media for the people. If you don't know quite what you want, just tell them to do something else, you can't get next to what's going down right now and you want to hear something different, so you can educate yourselves. It's always nice to hear what you know, but it's more fun to find out something new.

Radio should be done as a conscious educational tool, a weapon of cultural revolution, to turn people on and charge them with energy and information so they can change their world. Don't settle for a hip 24-hour-a-day jukebox like so many stations try to be. Every program should be an educational experience for all listeners, and if they aren't giving you that then you give them some hell until they start meeting their responsibilities to the community.

Radio is our cultural communications system, and we have the information. We have to have the music - the strongest and purest music being made everywhere on earth, all the time. We can't do without it, and we don't have to anymore. We have to have news of our brothers and sisters too, wherever they are, whatever they are doing, we have to know about it so we can grow with them and be them, so they can be us, so we will be united as a people in knowledge, culture and action.

When the barricades go up in Paris or Berkeley or Columbia University, we have to know about it so we can spread the word in our communities and act on that information. When people get kidnapped by the police on phony dope busts and held for ransom we have to know this stuff, all the time, and the radio can do it.

The duty of the revolutionary media is to communicate the news of the revolution - to get the dope to the people who need the information so they can act on it and become revolutionaries themselves, wherever they are. As we start to define this space for ourselves through our people in the media - our media - we help create a situation in which people who get our information start to act in the desired manner, i.e., in a revolutionary way. They start acting for themselves, moving to control their own lives - though not in any sense of limiting themselves, but simply freeing themselves from the consumer death ruse.

As we begin to infiltrate and destroy the straight media and straight culture in general we start to set people free who have been trapped inside the pigpen without any information on how to get out. When people see that our newspapers come out every two weeks, or that the music goes on no matter what. that our lives go on too. No one can act without the specific information that would make such action possible. Remember that. It does not do any good to come down on people for their ignorance - let them know what's happening and they'll at least have a chance to do the right thing. Without the information they can't get anywhere. The radio provides the information in a super-direct and very entertaining form so it can't be missed. If only the music. The radio subverts people, because they have not been taught to grant the music its rightful and complete legitimacy as a prime term in their lives.

Straight people have been taught that they are complete entities, in complete control of their little lives, given a free will that permits them to choose what they want to affect them. They live in their heads and see the world through their minds eyes instead of their real ones. Their vision is clouded by what's been shoved into their heads, and what they "think" is always more important to them than what's actually happening in the world. They'll do anything to preserve their illusions. In fact, to me that's precisely what makes the difference between someone who's straight and someone who's down, straight people have "made up their minds" as to what will happen to them, and their lives try to be precisely regulated in terms of these decisions, in terms of what they "think the world's all about." Actually, that's only how they're messed up - why it's that way is something else again. People are the way they are because their economy demands it. In order to maintain a consumer economy like America's the people in power have to keep a strict brainwash on the other people so they'll keep doing all the stupid things that are necessary to a consumers culture. Information has to be strictly limited - you have power over someone when you control the information they receive. When you can define the terms of a situation then you have a great deal of control over the outcome. But now we're starting to do a little defining of our own, and it will have its certain effect- just watch and see.

The radio - and in our particular instance I'm talking about WABX-FM in Detroit - the radio is now beginning to respond very precisely and very accurately to our needs, and we can grow as a community because of it. News gets around, as they say, and with the radio it gets right where it has to go. A sense of community is based upon adequate and accurate Communications between the people and the community, whatever its specific geographical specifications. Our culture has needed radio for a long time, and now we have it, or at least we're in the process of getting it. But our own communication with the media have to improve too, just as theirs have to, and are improving. When you know some news and want other people to know it too, call your radio station and tell people there what you want them to know. Sometimes they might not listen to you, having heavy duties on their minds and shoulders, but I would mostly say that you'll find someone listening to you and spreading your word if you're after the good of the community and not just on some weird ego trip. It might be the radio worker who's on the ego trip, and in that case you'll just have to demand someone else. It's your radio, after all, and you have to act like it when they get too weird on you.

That's our radio, but you know we aren't the only ones listening to it. By virtue of its very definition, radio reaches thousands and thousands of people who only have to turn on their receivers, which are standard gear now in most of our people's homes and automobiles. AM is next. Television is next. But with FM radio we have gone so much further than with any of the print media we have invented for ourselves - any of them. And we have the possibility of reaching lots of "neutral" people - people who wouldn't otherwise be exposed to our culture except through crazed articles in the kept press of the greed culture. "Hippies" and all that bullshit, which doesn't do anybody any good.

What we want is for these other people, just as ourselves, to get the information now! The real news, of what's happening in our lives. We want them to know, so they can change freely as they are - they learn that they can do it too. They can see that they can get away with it. And that's precisely the information they need.

♦Remember that this was in 1969. Now there is also WRIF in Detroit and WNRZ in Ann Arbor. Tune in.