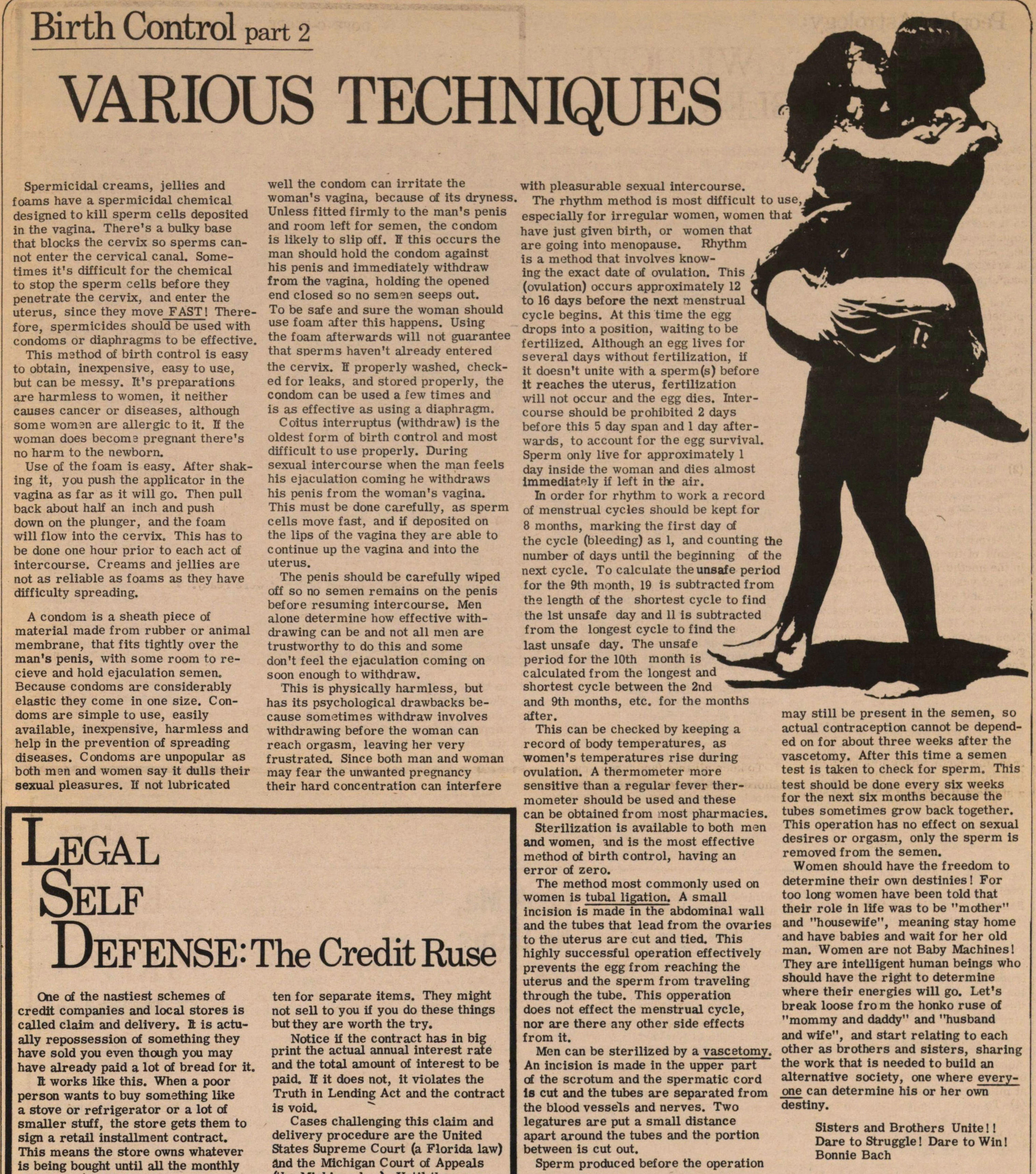 Spermicidal creams, jellies and foams have a spermicidal chemical designed to kill sperm cells deposited in the vagina. There's a bulky base that blocks the cervix so sperms cannot enter the cervical canal. Sometimes it's difficult for the chemical to stop the sperm cells before they penetrate the cervix, and enter the uterus, since they move FAST! Therefore, spermicides should be used with condoms or diaphragms to be effective.

This method of birth control is easy to obtain, inexpensive, easy to use, but can be messy. It's preparations are harmless to women, it neither causes cancer or diseases, although some women are allergic to it. If the woman does become pregnant there's no harm to the newborn.

Use of the foam is easy. After shaking it, you push the applicator in the vagina as far as it will go. Then pull back about half an inch and push down on the plunger, and the foam will flow into the cervix. This has to be done one hour prior to each act of intercourse. Creams and jellies are not as reliable as foams as they have difficulty spreading.

A condom is a sheath piece of material made from rubber or animal membrane, that fits tightly over the man's penis, with some room to receive and hold ejaculation semen. Because condoms are considerably elastic they come in one size. Condoms are simple to use, easily available, inexpensive, harmless and help in the prevention of spreading diseases. Condoms are unpopular as both men and women say it dulls their sexual pleasures. If not lubricated well the condom can irritate the woman's vagina, because of its dryness. Unless fitted firmly to the man's penis and room left for semen, the condom is likely to slip off. If this occurs the man should hold the condom against his penis and immediately withdraw from the vagina, holding the opened end closed so no semen seeps out. To be safe and sure the woman should use foam after this happens. Using the foam afterwards will not guarantee that sperms haven't already entered the cervix. If properly washed, checked for leaks, and stored properly, the condom can be used a few times and is as effective as using a diaphragm.

Coitus interruptus (withdraw) is the oldest form of birth control and most difficult to use properly. During sexual intercourse when the man feels his ejaculation coming he withdraws his penis from the woman's vagina. This must be done carefully, as sperm cells move fast, and if deposited on the lips of the vagina they are able to continue up the vagina and into the uterus.

The penis should be carefully wiped off so no semen remains on the penis before resuming intercourse. Men alone determine how effective withdrawing can be and not all men are trustworthy to do this and some don't feel the ejaculation coming on soon enough to withdraw.

This is physically harmless, but has its psychological drawbacks because sometimes withdraw involves withdrawing before the woman can reach orgasm, leaving her very frustrated. Since both man and woman may fear the unwanted pregnancy their hard concentration can interfere with pleasurable sexual intercourse.

The rhythm method is most difficult to use, especially for irregular women, women that have just given birth, or women that are going into menopause. Rhythm is a method that involves knowing the exact date of ovulation. This (ovulation) occurs approximately 12 to 16 days before the next menstrual cycle begins. At this time the egg drops into a position, waiting to be fertilized. Although an egg lives for several days without fertilization, if it doesn't unite with a sperm(s) before it reaches the uterus, fertilization will not occur and the egg dies. Intercourse should be prohibited 2 days before this 5 day span and 1 day afterwards, to account for the egg survival. Sperm only live for approximately 1 day inside the woman and dies almost immediately if left in the air.

In order for rhythm to work a record of menstrual cycles should be kept for 8 months, marking the first day of the cycle (bleeding) as 1, and counting the number of days until the beginning of the next cycle. To calculate the unsafe period for the 9th month, 19 is subtracted from the length of the shortest cycle to find the 1st unsafe day and 11 is subtracted from the longest cycle to find the last unsafe day. The unsafe period for the 10th month is calculated from the longest and shortest cycle between the 2nd and 9th months, etc. for the months after.

This can be checked by keeping a record of body temperatures, as women's temperatures rise during ovulation. A thermometer more sensitive than a regular fever thermometer should be used and these can be obtained from most pharmacies.

Sterilization is available to both men and women, and is the most effective method of birth control, having an error of zero.

The method most commonly used on women is tubal ligation. A small incision is made in the abdominal wall and the tubes that lead from the ovaries to the uterus are cut and tied. This highly successful operation effectively prevents the egg from reaching the uterus and the sperm from traveling through the tube. This operation does not effect the menstrual cycle, nor are there any other side effects from it.

Men can be sterilized by a vascetomy. An incision is made in the upper part of the scrotum and the spermatic cord is cut and the tubes are separated from the blood vessels and nerves. Two legatures are put a small distance apart around the tubes and the portion between is cut out.

Sperm produced before the operation may still be present in the semen, so actual contraception cannot be depended on for about three weeks after the vascetomy. After this time a semen test is taken to check for sperm. This test should be done every six weeks for the next six months because the tubes sometimes grow back together. This operation has no effect on sexual desires or orgasm, only the sperm is removed from the semen.

Women should have the freedom to determine their own destinies! For too long women have been told that their role in life was to be "mother" and "housewife", meaning stay home and have babies and wait for her old man. Women are not Baby Machines! They are intelligent human beings who should have the right to determine where their energies will go. Let's break loose from the honko ruse of "mommy and daddy" and "husband and wife", and start relating to each other as brothers and sisters, sharing the work that is needed to build an alternative society, one where everyone can determine his or her own destiny.

Dare to Struggle! Dare to Win!