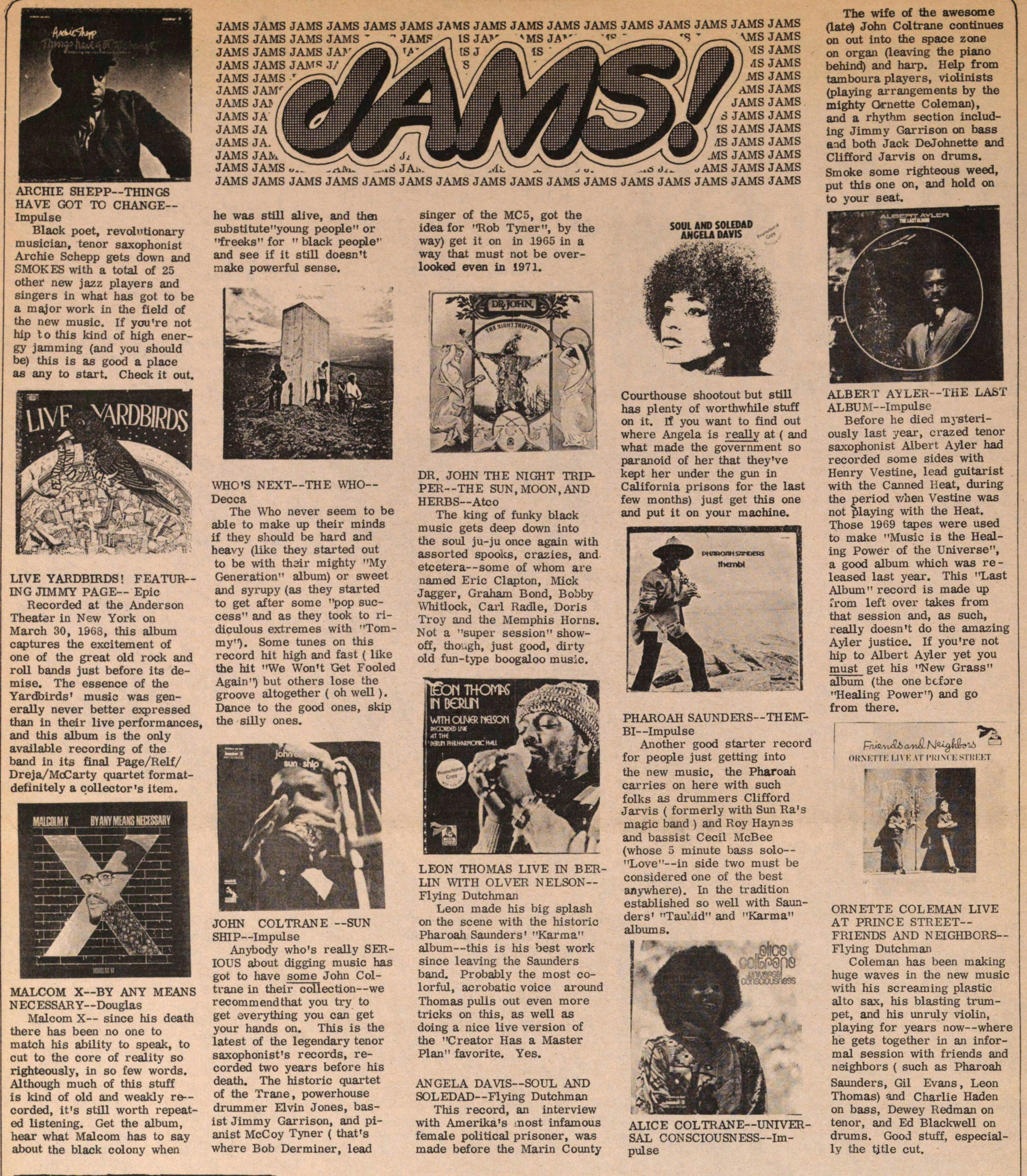 ARCHIE SHEPP--THINGS HAVE GOT TO CHANGE-Impulse.  Black poet, revolutionary musician, tenor saxophonist Archie Schepp gets down and SMOKES with a total of 25 other new jazz players and singers in what has got to be a major work in the field of the new music. If you're not hip to this kind of high energy jamming (and you should be) this is as good a place as any to start. Check it out. LIVE YARDBIRDS! FEATURING JIMMY PAGE-- Epic.  Recorded at the Anderson Theater in New York on March 30, 1968, this album captures the excitement of one of the great old rock and roll bands just before its demise. The essence of the Yardbirds' music was generally never better expressed than in their live performances, and this album is the only available recording of the band in its final Page/Relf/Dreja/McCarty quartet format--definitely a collector 's item. MALCOLM X--BY ANY MEANS NECESSARY-- Douglas.  Malcolm X - since his death there has been no one to match his ability to speak, to cut to the core of reality so righteously in so few words. Although much of this stuff is kind of old and weakly recorded, it's still worth repeated listening. Get the album, hear what Malcolm has to say about the black colony when he was still alive, and then substitute "young people" or "freaks" for " black people" and see if it still doesn't make powerful sense. WHO'S NEXT- THE WHO-- Decca. The Who never seem to be able to make up their minds if they should be hard and heavy (like they started out to be with their mighty "My Generation" album) or sweet and syrupy (as they started to get after some "pop success" and as they took to ridiculous extremes with "Tommy"). Some tunes on this record hit high and fast (like the hit "We Won't Get Fooled Again"), but others lose the groove altogether (oh well) . Dance to the good ones, skip the silly ones. JOHN COLTRANE -SUN SHIP-- Impulse.  Anybody who's really SERIOUS about digging music has got to have some John Coltrane in their collection - we recommend that you try to get everything you can get your hands on. This is the latest of the legendary tenor saxophonist's records, recorded two years before his death. The historic quartet of the Trane, powerhouse drummer Elvin Jones, bassist Jimmy Garrison, and pianist McCoy Tyner (that's where Bob Derminer, lead singer of the MC 5, got the idea for "Rob Tyner", by the way) get it on in 1965 in a way that must not be overlooked even in 1971. DR. JOHN THE NIGHT TRIPPER--THE SUN, MOON, AND HERBS-- Ateo.  The king of funky black music gets deep down into the soul ju-ju once again with assorted spooks, crazies, and etcetera - some of whom are named Eric Clapton, Mick Jagger, Graham Bond, Bobby Whitlock, Cari Radle, Doris Troy and the Memphis Horns. Not a "super session" showoff, though, just good, dirty old fun-type boogaloo music. LEON THOMAS LIVE IN BERLIN WITH OLIVER NELSON-- Flying Dutchman. Leon made his big splash on the scene with the historic Pharoah Saunders' "Karma" album - this is his best work since leaving the Saunders band. Probably the most colorful, acrobatic voice around, Thomas pulls out even more tricks on this, as well as doing a nice live version of the "Creator Has a Master Plan" favorite. Yes. ANGELA DAVIS-- SOUL AND SOLEDAD --Flying Dutchman. This record, an interview with America's most infamous female political prisoner was made before the Marin County Courthouse shootout, but still has plenty of worthwhile stuff on it. If you want to find out where Angela is really at (and what made the government so paranoid of her that they've kept her under the gun in California prisons for the last few months), just get this one and put it on your machine. PHAROAH SAUNDERS- THEMBI -- Impulse.  Another good starter record for people just getting into the new music, the Pharoah carries on here with such folks as drummers Clifford Jarvis ( formerly with Sun Ra's magic band ) and Roy Haynes and bassist Cecil McBee (whose 5 minute bass solo - "Love" - in side two must be considered one of the best anywhere). In the tradition established so well with Saunders' "Tauhid" and "Karma" albums. ALICE COLTRANE- UNIVERSAL CONSCIOUSNESS-- Impulse.  The wife of the awesome (late) John Coltrane continues on out into the space zone on organ (leaving the piano behind) and harp. Help from tamboura players, violinists (playing arrangements by the mighty Ornette Coleman), and a rhythm section including Jimmy Garrison on bass and both Jack DeJohnette and Clifford Jarvis on drums. Smoke some righteous weed, put this one on, and hold on to your seat. ALBERT AYLER--THE LAST ALBUM-- Impulse.  Before he died mysteriously last year, crazed tenor saxophonist Albert Ayler had recorded some sides with Henry Vestine, lead guitarist with the Canned Heat, during the period when Vestine was not playing with the Heat. Those 1969 tapes were used to make "Music is the Healing Power of the Universe", a good album which was released last year. This "Last Album" record is made up from left over takes from that session and, as such, really doesn't do the amazing Ayler justice. If you're not hip to Albert Ayler yet you must get his "New Grass" album (the one before "Healing Power") and go from there. ORNETTE COLEMAN LIVE AT PRINCE STREET- FRIENDS AND NEIGHBORS-- Flying Dutchman.  Coleman has been making huge waves in the new music with his screaming plastic alto sax, his blasting trumpet, and his unruly violin, playing for years now--where he gets together in an informal session with friends and neighbors ( such as Pharoah Saunders, Gil Evans, Leon Thomas) and Charlie Haden on bass, Dewey Redman on tenor, and Ed Blackwell on drums. Good stuff, especially the title cut.