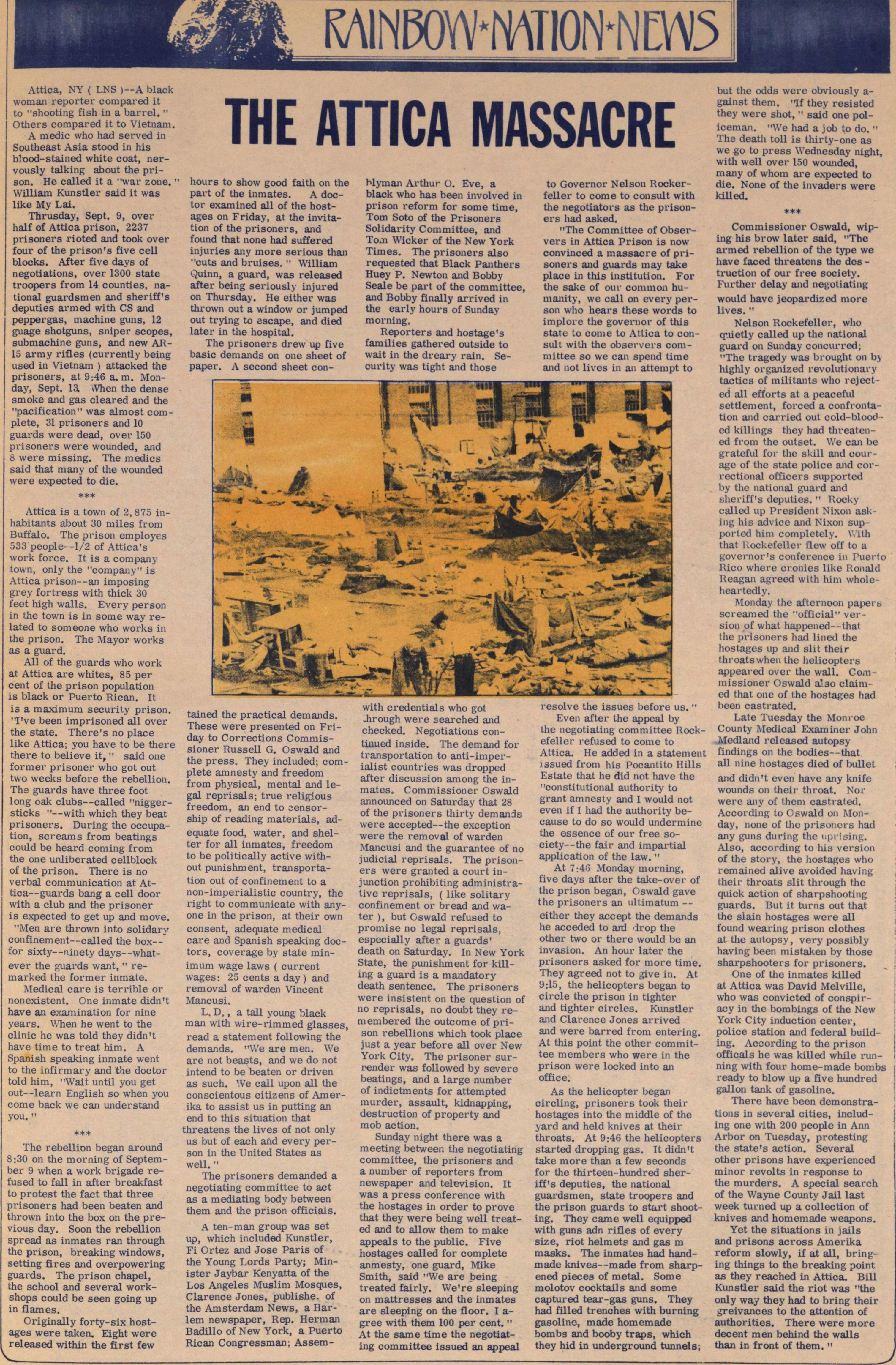 A medic who had served in Southeast Asia stood in his blood-stained white coat, nervously talking about the prison. He called it a "war zone." William Kunstier said it was like My Lai.

Thrusday, Sept. 9, over half of Attica prison, 2237 prisoners rioted and took over four of the prison 's five cell blocks. After five days of negotiations, over 1300 state troopers from 14 counties, national guardsmen and sheriff's deputies armed with CS and peppergas, machine guns, 12 guage shotguns, sniper scopes, submachine guns, and new AR13 army rifles (currently being used in Vietnam) attacked the prisoners, at 9:46 a.m. Monday, Sept. 13. When the dense smoke and gas cleared and the "pacification" was almost complete, 31 prisoners and 10 guards were dead, over 150 prisoners were wounded, and 8 were missing. The medics said that many of the wounded were expected to die.

Attica is a town of 2,875 inhabitants about 30 miles from Buffalo. The prison employes 533 people--1/2 of Attica's work force. It is a company town, only the "company" is Attica prison -- an imposing grey fortress with thick 30 feet high walls. Every person in the town is in some way related to someone who works in the prison. The Mayor works as a guard.

All of the guards who work at Attica are whites, 85 per cent of the prison population is black or Puerto Rican. It is a maximum security prison. "I've been imprisoned all over the state. There's no place like Attica; you have to be there there to believe it," said one former prisoner who got out two weeks before the rebellion. The guards have three foot long oak clubs - called "nigger-sticks"--with which they beat prisoners. During the occupation, screams from beatings could be heard coming from the one unliberated cellblock of the prison. There is no verbal communication at Attica -- guards bang a cell door with a club and the prisoner is expected to get up and move. "Men are thrown into solidary confinement- called the box--for sixty--ninety days--whatever the guards want," remarked the former inmate.

Medical care is terrible or nonexistent. One inmate didn't have an examination for nine years. When he went to the clinic he was told they didn't have time to treat him. A Spanish speaking inmate went to the infirmary and the doctor told him, "Wait until you get out--learn English so when you come back we can understand you."

The rebellion began around 8:30 on the morning of September 9 when a work brigade refused to fall in after breakfast to protest the fact that three prisoners had been beaten and thrown into the box on the previous day. Soon the rebellion spread as inmates ran through the prison, breaking windows, setting fires and overpowering guards. The prison chapel, the school and several workshops could be seen going up in flames.

Originally forty-six hostages were taken, Eight were released within the first few hours to show good faith on the part of the inmates. A doctor examined all of the hostages on Friday, at the invitation of the prisoners, and found that none had suffered injuries any more serious than "cuts and bruises. " William Quinn, a guard, was released after being seriously injured on Thursday. He either was thrown out a window or jumped out trying to escape, and died later in the hospital.

The prisoners drew up five basic demands on one sheet of paper. A second sheet contained the practical demands. These were presented on Friday to Corrections Commissioner Russell G. Oswald and the press. They included; complete amnesty and freedom from physical, mental and legal reprisals; true religious freedom, an end to censorship of reading materials, adequate food, water, and shelter for all inmates, freedom to be politically active without punishment, transportation out of confinement to a non-imperialistic country, the right to communicate with anyone in the prison, at their own consent, adequate medical care and Spanish speaking doctors, coverage by state minimum wage laws ( current wages: 25 cents a day ) and removal of warden Vincent Mancusi.

L.D., a tall young black man with wire-rimmed glasses, read a statement following the demands. "We are men. We are not beasts, and we do not intend to be beaten or driven as such. We cali upon all the conscientous citizens of Amerika to assist us in putting an end to this situation that threatens the lives of not only us but of each and every person in the United States as well."

The prisoners demanded a negotiating committee to act as a mediating body between them and the prison officials.

A ten-man group was set up, which included Kunstier, Fi Crtez and José Paris of the Young Lords Party; Minister Jaybar Kenyatta of the Los Angeles Muslim Mosques, Clarence Jones, publishe. of the Amsterdam News, a Harlem newspaper, Rep. Herman Badillo of New York, a Puerto Rican Congressman; Myman Arthur O. Eve, a black who has been involved in prison reform for some time, Torn Soto of the Prisoners Solidarity Committee, and To.n Wicker of the New York Times. The prisoners also requested that Black Panthers Huey P. Newton and Bobby Seale be part of the committee, and Bobby finally arrived in the early hours of Sunday morning.

Reporters and hostage's families gathered outside to wait in the dreary rain. Security was tight and those with credentials who got through were searched and checked. Negotiations continued inside. The demand for transportation to anti-imperialist countries was dropped after discussion among the inmates. Commissioner Oswald announced on Saturday that 28 of the prisoners thirty demands were accepted--the exception were the removal of warden Mancusi and the guarantee of no judicial reprisals. The prisoners were granted a court injunction prohibiting administrative reprisals, (like solitary confinement or bread and water), but Gswald refused to promise no legal reprisals, especially after a guards' death on Saturday. In New York State, the punishment for killing a guard is a mandatory death sentence. The prisoners were insistent on the question of no reprisals, no doubt they remembered the outcome of prison rebellions which took place just a year before all over New York City. The prisoner surrender was followed by severe beatings, and a large number of indictments for attempted murder, assault, kidnapping, destruction of property and mob action.

Sunday night there was a meeting between the negotiating committee, the prisoners and a number of reporters from newspaper and television. It was a press conference with the hostages in order to prove that they were being well treated and to allow them to make appeals to the public. Five hostages called for complete anmesty, one guard, Mike Smith, said "We are being treated fairly. We're sleeping on mattresses and the inmates are sleeping on the floor. I agree with them 100 per cent. " At the same time the negotiating committee issued an appeal to Governor Nelson Rockerfeller to come to consult with the negotiators as the prisoners had asked. 'The Committee of Observers in Attica Prison is now convinced a massacre of prisoners and guards may take place in this institution. For the sake of our common humanity, we call on every person who hears these words to implore the governor of this state to come to Attica to consult with the observers committee so we can spend time and not lives in an attempt to resolve the issues before us."

Even after the appeal by the negotiating committee Rockefeller refused to come to Attica. He added in a statement issued from his Pocantito Hills Estate that he did not have the "constitutional authority to grant amnesty and I would not even if I had the authority because to do so would undermine the essence of our free society- -the fair and impartial application of the law." At 7:46 Monday morning, five days after the take-over of the prison began, Oswald gave the prisoners an ultimatum -- either they accept the demands he acceded to and drop the other two or there would be an invasion. An hour later the prisoners asked for more time. They agreed not to give in. At 9:15, the helicopters began to circle the prison in tighter and tighter circles. Kunstler and Clarence Jones arrived and were barred from entering. At this point the other committee members who were in the prison were locked into an office.

As the helicopter began circling, prisoners took their hostages into the middle of the yard and held knives at their throats. At 9:46 the helicopters started dropping gas. It didn't take more than a few seconds for the thirteen-hundred sheriff's deputies, the national guardsmen, state troopers and the prison guards to start shooting. They came well equipped with guns and rifles of every size, riot helmets and gas masks. The inmates had handmade knives - made from sharpened pieces of metal. Some molotov cocktails and some captured tear-gas guns. They had filled trenches with burning gasoline, made homemade bombs and booby traps, which they hid in underground tunnels; but the odds were obviously against them. 'lf they resisted they were shot, " said one policeman. "We had a job to do." The death toll is thirty-one as we go to press Wednesday night, with well over 150 wounded, many of whom are expected to die. None of the invaders were killed.

Commissioner Oswald, wiping his brow later said, "The armed rebellion of the type we have faced threatens the destruction of our free society. Further delay and negotiating would have jeopardized more lives. "

Nelson Rockefeller, who quietly called up the national guard on Sunday concurred; "The tragedy was brought on by highly organized revolutionary tactics of militants who rejected all efforts at a peaceful settlement, forced a confrontation and carried out cold-blooded killings they had threatened from the outset. We can be grateful for the skill and courage of the state police and correctional officers supported by the national guard and sheriff's deputies. " Rocky called up President Nixon asking his advice and Nixon supported him completely. With that Rockefeller flew off to a governor 's conference in Puerto Rico where cronies like Ronald Heagan agreed with him wholeheartedly.

Monday the afternoon papers screamed the "official" version of what happened - that the prisoners had lined the hostages up and slit their throats when the helicopters appeared over the wall. Commissioner Oswald also claimed that one of the hostages had been castrated.

Late Tuesday the Monroe County Medical Examiner John Alcdland released autopsy findings on the bodies--that all nine hostages died of bullet ; and didn't even have any knife wounds on their throat. Nor were any of them castrated. According lo Oswald on Monday, none of the prisoners had any guns during the uprising, Also, according to his version of the story, the hostages who remained alive avoided having their throats slit through the quick action of sharpshooting guards. But it turns out that the slain hostages were all found wearing prison clothes at the autopsy, very possibly having been mistaken by those sharpshooters for prisoners.

One of the inmates killed at Attica was David Melville, who was convicted of conspiracy in the bombings of the New York City induction center, police station and federal building. According to the prison officals he was killed while running with four home-made bombs ready to blow up a five hundred gallon tank of gasoline.

There have been demonstrations in several cities, including one with 200 people in Ann Arbor on Tuesday, protesting the state's action. Several other prisons have experienced minor revolts in response to the murders. A special search of the Wayne County Jail last week turned up a collection of knives and homemade weapons. Yet the situations in jails and prisons across Amerika reform slowly, if at all, bringing things to the breaking point as they reached in Attica. Bill Kunstler said the riot was "the only way they had to bring their greivances to the attention of authorities. There were more decent men behind the walls than in front of them."