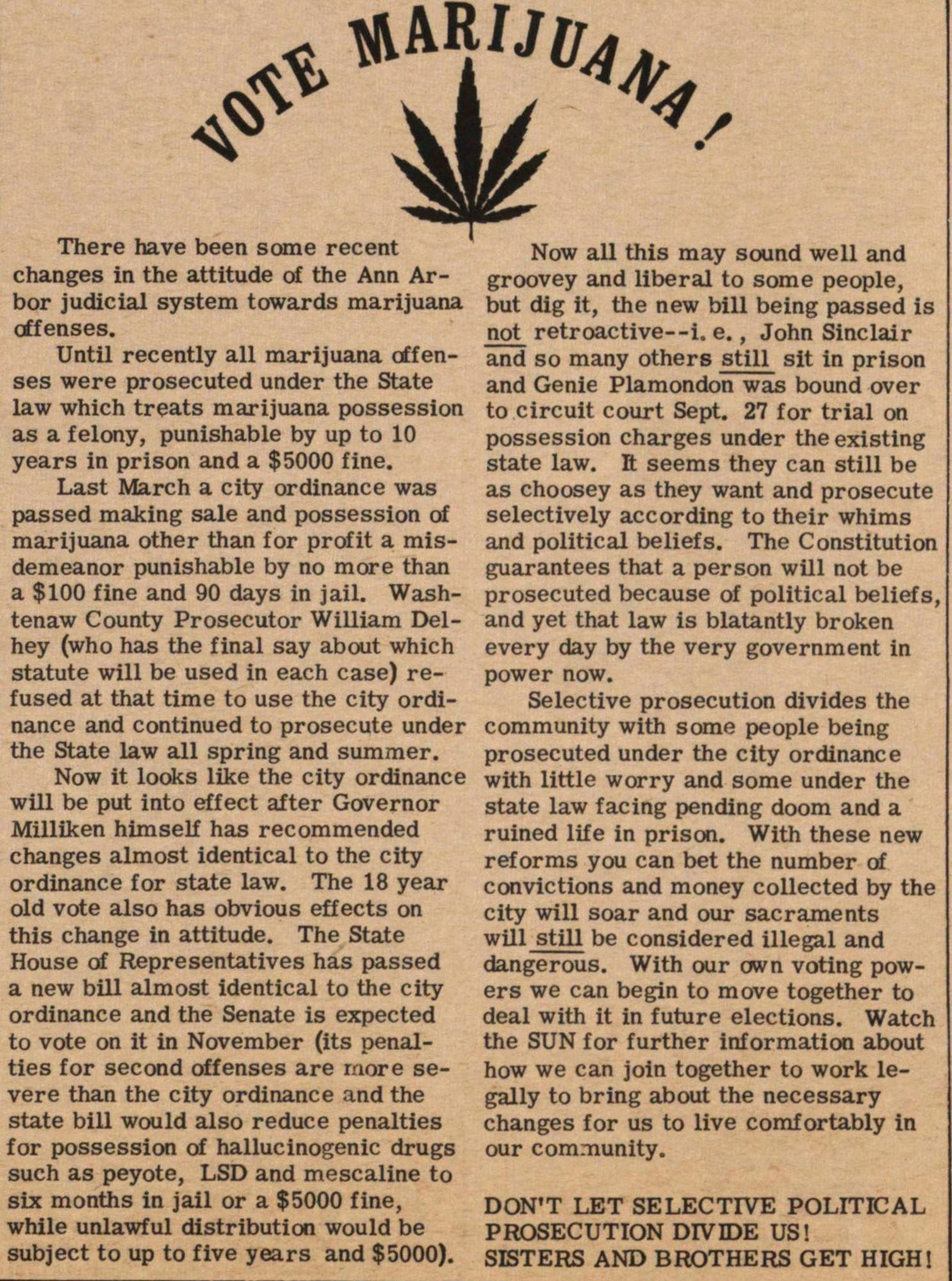 There have been some recent changes in the attitude of the Ann Arbor judicial system towards marijuana oífenses. Until recently all marijuana offenses were prosecuted under the State law which treats marijuana possession as a felony, punishable by up to 10 years in prison and a $5000 fine. Last March a city ordinance was passed making sale and possession of marijuana other than for profit a misdemeanor punishable by no more than a $100 fine and 90 days in jail. Washtenaw County Prosecutor William Delhey (who has the final say about which statute will be used in each case) refused at that time to use the city ordinance and continued to prosecute under the State law all spring and summer. Now it looks like the city ordinance will be put into effect after Governor Milliken himself has recommended changes almost identical to the city ordinance for state law. The 18 year oíd vote also has obvious effects on this change in attitude. The State House af Representatives has passed a new bill almost identical to the city ordinance and the Senate is expected to vote on it in November (its penalties for second offenses are more severe than the city ordinance and the state bilí would also reduce penalties for possession of hallucinogenic drugs such as peyote, LSD and mescaline to six months in jail or a $5000 fine, while unlawful distribution would be subject to up to five years and $5000). Now all this may sound we 11 and groovey and liberal to some people, but dig it, the new bill being passed is not retroactive--i. e. , John Sinclair and so many others still sit in prison and Genie Plamondon was bound over to circuit court Sept. 27 for trial on possession charges under the existing state law. K seems they can still be as choosey as they want and prosecute selectively according to their whims and political beliefs. The Constitution guar antees that a per son will not be prosecuted because of political beliefs, and yet that law is blatantly broken every day by the very government in power now. Selective prosecution divides the community with some people being prosecuted under the city ordinario e with little worry and some under the state law facing pending doom and a ruined life in prison. With these new reforms you can bet the number of convictions and money collected by the city will soar and our sacraments will still be considered illegal and dangerous. With our own voting powers we can begin to move together to deal with it in future elections. Watch the SUN for further Information about how we can join together to work legally to bring about the necessary changes for us to live comí ortably in our community. DON'T LET SELECTIVE POLITICAL PROSECUTION DIVIDE US1 SISTERS AND BROTHERS GET HIGH!