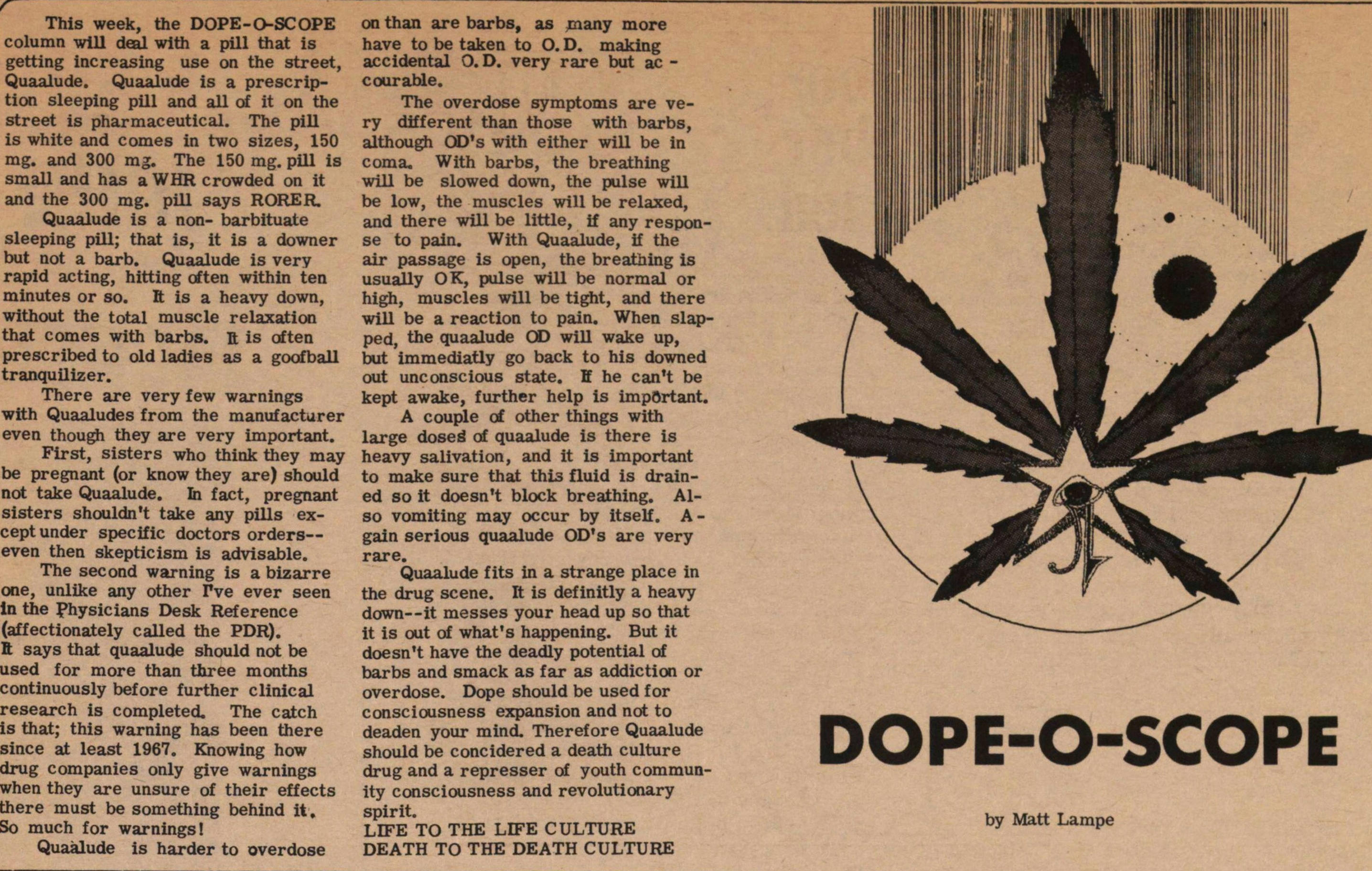 r This week, the DOPE-O-SCOPE column will dal wlth a pill that is getting increasing use on the street, Quaalude. Quaalude is a prescription sleeping pill and all of it on the street is pharmaceutical. The pill is white and comes in two sizes, 150 mg. and 300 mg. The 150 mg. pill is small and has a WHR crowded on it and the 300 mg. pill says RORER. Quaalude is a barbituate sleeping pill; that is, it is a downer but not a barb. Quaalude is very rapid acting, hitting aften within ten minutes or so. It is a heavy down, without the total muscle relaxation that comes with barbs. ft is aften prescribed to oíd ladies as a goofball tranquilizer. There are very few warnings with Quaaludes from the manufacturer even though they are very important. First, sisters who think they may be pregnant (or know they are) should not take Quaalude. In fact, pregnant sisters shouldn't take any puls except under specific doctors orders- even then skepticism is advisable. The second warning is a bizarre one, unlike any other Pve ever seen in the Physicians Desk Reference (affectionately called the PDR). fi says that quaalude should not be used for more than three months continuously before further clinical research is completed. The catch is that; this warning has been there since at least 1967. Knowing how drug companies only give warnings when they are unsure of their effects there must be something behind it. So much for warnings! Quaalude is harder to overdose on than are barbs, as many more have to be taken to O. D. making accidental O. D. very rare but ac - courable. The overdose symptoms are very different than those with barbs, although OD's with either will be in coma. With barbs, the breathing will be slowed down, the pulse will be low, the muscles will be relaxed, and there will be little, if any response to pain. With Quaalude, if the air passage is open, the breathing is usually OK, pulse will be normal or high, muscles will be tight, and there will be a reaction to pain. When slapped, the quaalude OD will wake up, but immediatly go back to his downed out unconscious state, ff he can't be kept awake, further help is important. A couple of other things with large doseë of quaalude is there is heavy salivation, and it is important to make sure that thLs fluid is drained so it doesn't block breathing. Also vomiting may occur by itself. Again serious quaalude OD's are very rare. Quaalude fits in a strange place in the drug scène. It is definitly a heavy down - it messes your head up so that it is out of what's happening. But it doesn't have the deadly potential of barbs and smack as far as addiction or overdose. Dope should be used for consciousness expansión and not to deaden your mini Therefore Quaalude should be concidered a death culture drug and a represser of youth community consciousness and revolutionary spirit. LIFE TO THE LIFE CULTURE DEATH TO THE DEATH CULTURE