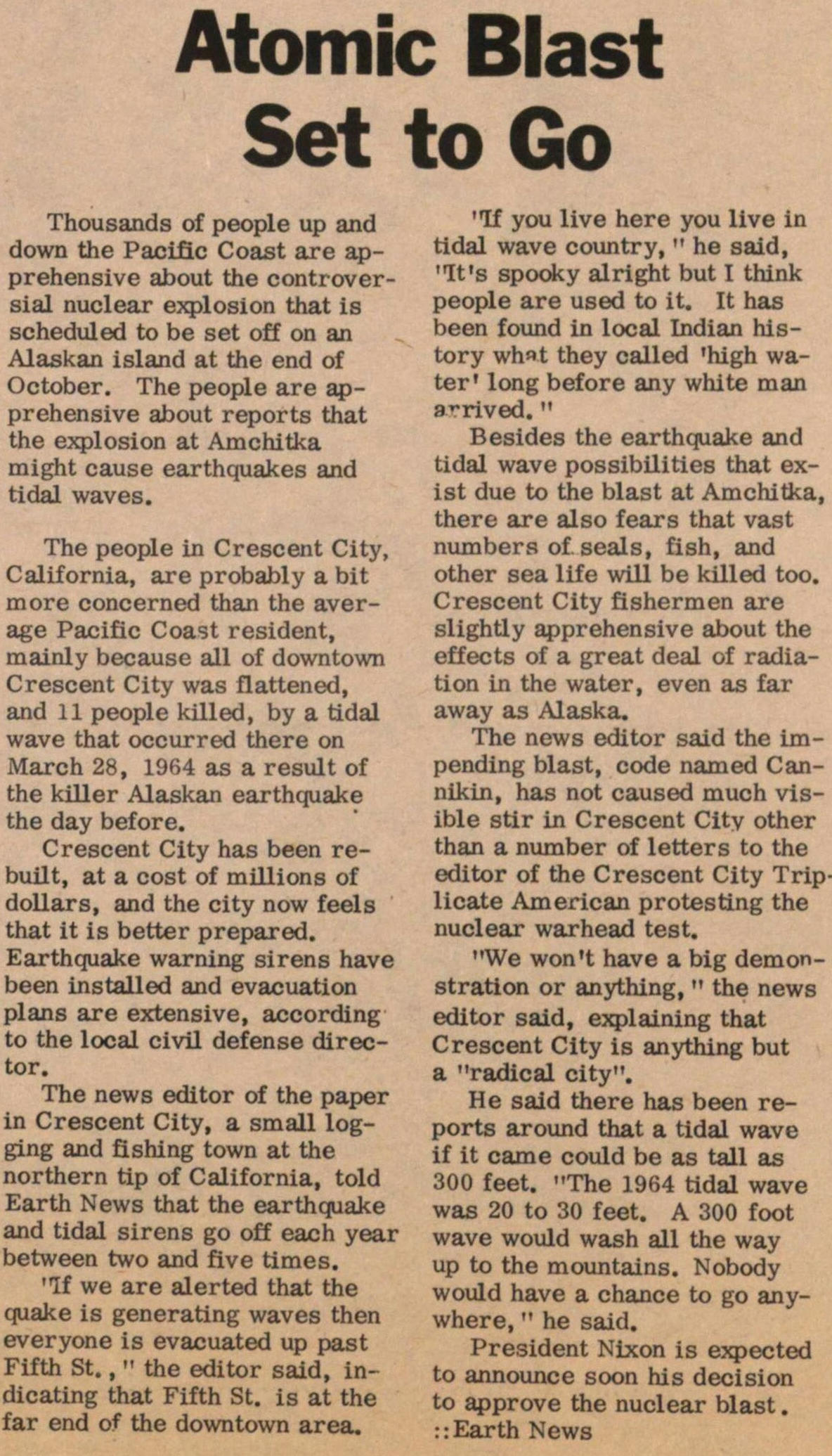 The people in Crescent City, California, are probably a bit more concerned than the average Pacific Coast resident, mainly because all of downtown Crescent City was flattened, and 11 people killed, by a tidal wave that occurred there on March 28, 1964 as a result of the killer Alaskan earthquake the day before.

Crescent City has been rebuilt, at a cost of millions of dollars, and the city now feels that it is better prepared. Earthquake warning sirens have been installed and evacuation plans are extensive, according to the local civil defense director.

The news editor of the paper in Crescent City, a small logging and fishing town at the northern tip of California, told Earth News that the earthquake and tidal sirens go off each year between two and five times.

"If we are alerted that the quake is generating waves then everyone is evacuated up past Fifth St., " the editor said, indicating that Fifth St. is at the far end of the downtown area.

"If you live here you live in tidal wave country," he said, "It's spooky alright but I think people are used to it. It has been found in local Indian history what they called 'high water' long before any white man arrived."

Besides the earthquake and tidal wave possibilities that exist due to the blast at Amchitka, there are also fears that vast numbers of seals, fish, and other sea life will be killed too. Crescent City fishermen are slightly apprehensive about the effects of a great deal of radiation in the water, even as far away as Alaska.

The news editor said the impending blast, code named Cannikin, has not caused much visible stir in Crescent City other than a number of letters to the editor of the Crescent City Triplicate American protesting the nuclear warhead test.

"We won't have a big demonstration or anything," the news editor said, explaining that Crescent City is anything but a "radical city".

He said there has been reports around that a tidal wave if it carne could be as tall as 300 feet. "The 1964 tidal wave was 20 to 30 feet. A 300 foot wave would wash all the way up to the mountains. Nobody would have a chance to go anywhere," he said.

President Nixon is expected to announce soon his decision to approve the nuclear blast.