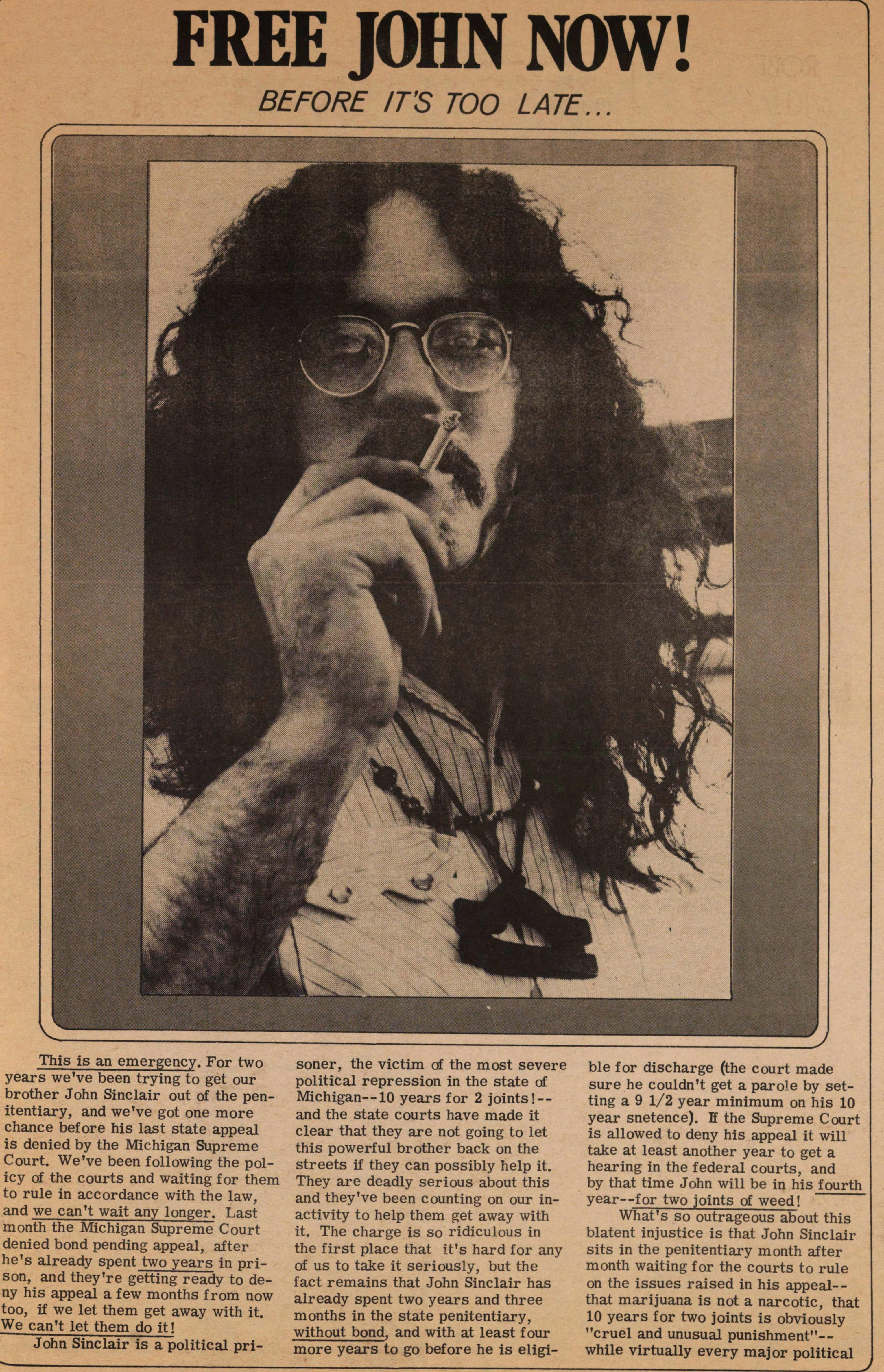 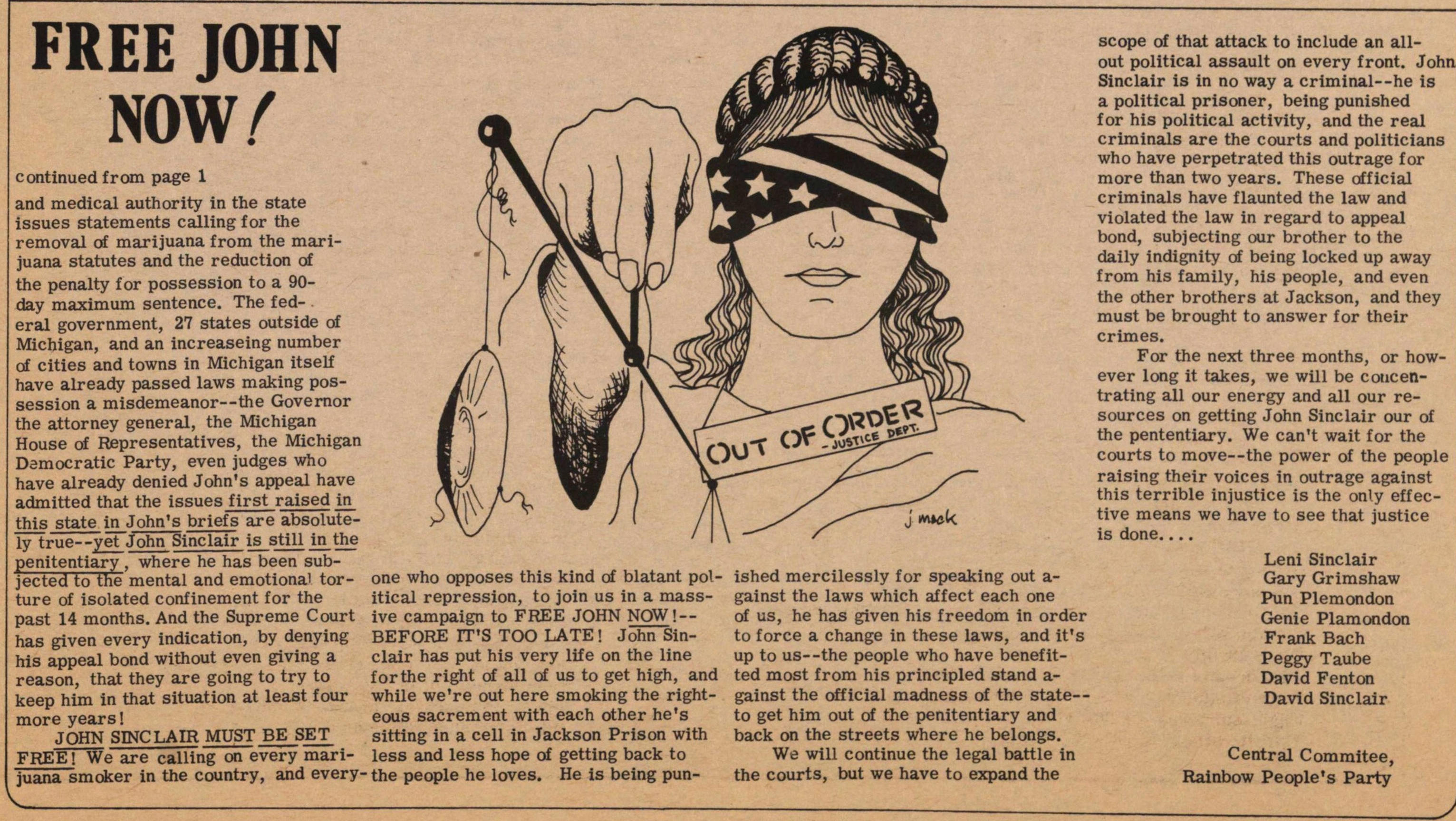 This is an emergency. For two years we've been trying to get our brother John Sinclair out of the penitentiary, and we've got one more chance before his last state appeal is denied by the Michigan Supreme Court. We've been following the policy of the courts and waiting for them to rule in accordance with the law, and we can't wait any longer. Last month the Michigan Supreme Court denied bond pending appeal, after he's already spent two years in prison, and they're getting ready to deny his appeal a few months from now too, if we let them get away with it. We can't let them do it!

John Sinclair is a political prisoner, the victim of the most severe political repression in the state of Michigan--10 years for 2 joints!--and the state courts have made it clear that they are not going to let this powerful brother back on the streets if they can possibly help it. They are deadly serious about this and they've been counting on our inactivity to help them get away with it. The charge is so ridiculous in the first place that it's hard for any of us to take it seriously, but the fact remains that John Sinclair has already spent two years and three months in the state penitentiary, without bond, and with at least four more years to go before he is eligible for discharge (the court made sure he couldn't get a parole by setting a 9 1/2 year minimum on his 10 year snetence). If the Supreme Court is allowed to deny his appeal it will take at least another year to get a hearing in the federal courts, and by that time John will be in his fourth year--for two joints of weed!

What's so outrageous about this blatent injustice is that John Sinclair sits in the penitentiary month after month waiting for the courts to rule on the issues raised in his appeal-- that marijuana is not a narcotic, that 10 years for two joints is obviously "cruel and unusual punishment"--while virtually every major political and medical authority in the state issues statements calling for the removal of marijuana from the marijuana statutes and the reduction of the penalty for possession to a 90-day maximum sentence. The federal government, 27 states outside of Michigan, and an increaseing number of cities and towns in Michigan itself have already passed laws making possession a misdemeanor--the Governor the attorney general, the Michigan House of Representatives, the Michigan Democratic Party, even judges who have already denied John 's appeal have admitted that the issues first raised in this state in John's briefs are absolutely true--yet John Sinclair is still in the penitentiary, where he has been subjected to the mental and emotional torture of isolated confinement for the past 14 months. And the Supreme Court has given every indication, by denying his appeal bond without even giving a reason, that they are going to try to keep him in that situation at least four more years!

JOHN SINCLAIR MUST BE SET FREE! We are calling on every marijuana smoker in the country, and one who opposes this kind of blatant political repression, to join us in a massive campaign to FREE JOHN NOW!--BEFORE IT'S TOO LATE! John Sinclair has put his very life on the line for the right of all of us to get high, and while we're out here smoking the righteous sacrement with each other he's sitting in a cell in Jackson Prison with less and less hope of getting back to the people he loves. He is being punished mercilessly for speaking out against the laws which affect each one of us, he has given his freedom in order to force a change in these laws, and it's up to us--the people who have benefitted most from his principled stand against the official madness of the state--to get him out of the penitentiary and back on the streets where he belongs.

We will continue the legal battle in the courts, but we have to expand the scope of that attack to include an all-out political assault on every front. John Sinclair is in no way a criminal--he is a political prisoner, being punished for his political activity, and the real criminals are the courts and politicians who have perpetrated this outrage for more than two years. These official criminals have flaunted the law and violated the law in regard to appeal bond, subjecting our brother to the daily indignity of being locked up away from his family, his people, and even the other brothers at Jackson, and they must be brought to answer for their crimes.

For the next three months, or however long it takes, we will be concentrating all our energy and all our resources on getting John Sinclair our of the pententiary. We can't wait for the courts to move--the power of the people raising their voices in outrage against this terrible injustice is the only effective means we have to see that justice is done. . . . Leni Sinclair Gary Grimshaw Pun Plemondon Genie Plamondon Frank Bach Peggy Taube David Fenton David Sinclair Central Commitee, Rainbow People's Party