Excerpts From The Prison Diary Of John Sinclair 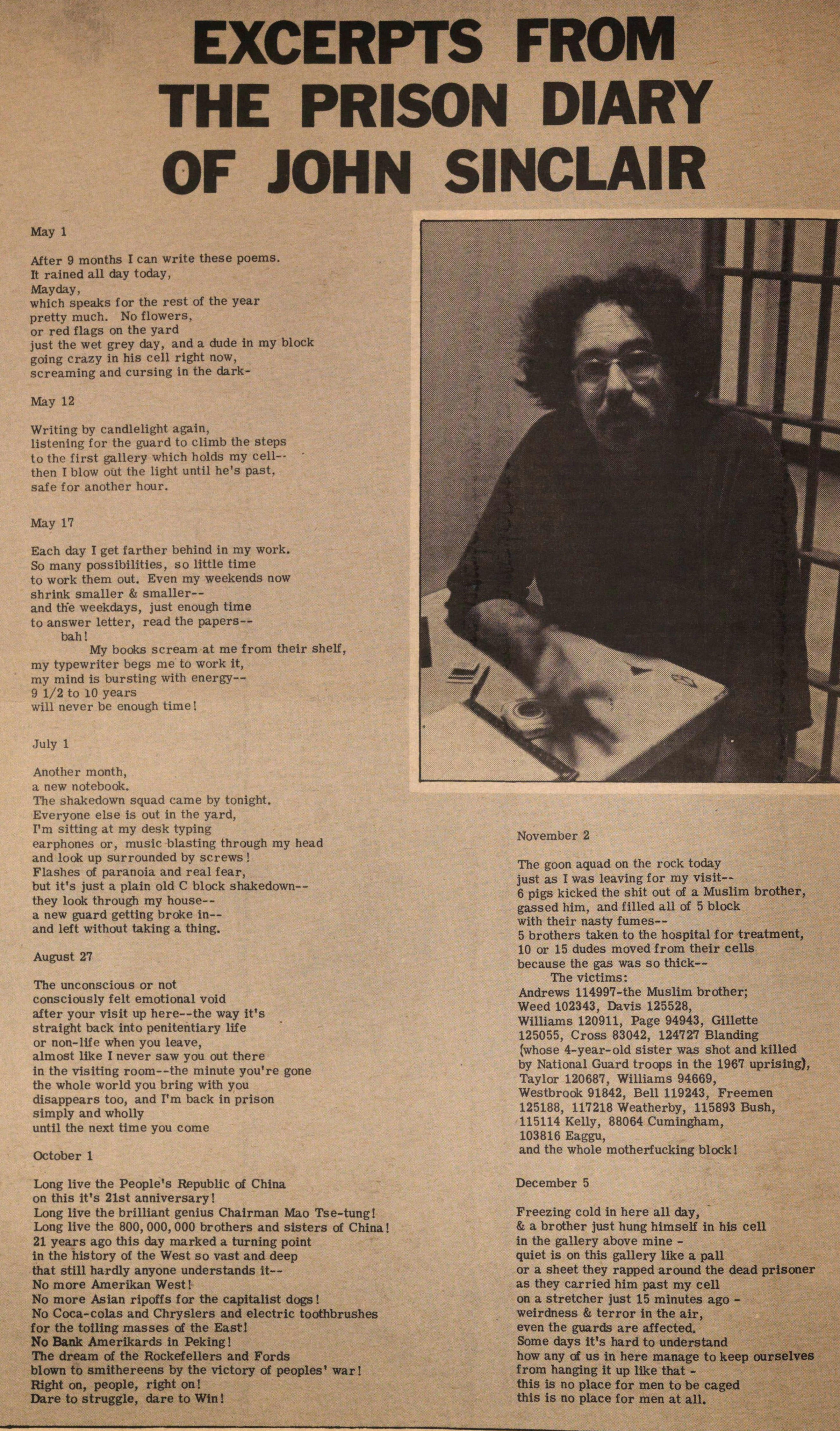 EXCERPTS FROM THE PRISON DIARY OF JOHN SINCLAIR

After 9 months I can write these poems. It rained all day today, Mayday, which speaks for the rest of the year pretty much. No flowers, or red flags on the yard just the wet grey day, and a dude in my block going crazy in his cell right now, screaming and cursing in the dark-

Writing by candlelight again, listening for the guard to climb the steps to the first gallery which holds my cell--then I blow out the light until he's past, safe for another hour.

Each day I get farther behind in my work. So many possibilities, so little time to work them out. Even my weekends now shrink smaller & smaller--and the weekdays, just enough time to answer letter, read the papers-- bah! My books scream at me from their shelf, my typewriter begs me to work it, my mind is bursting with energy-- 9 1/2 to 10 years will never be enough time!

Another month, a new notebook. The shakedown squad came by tonight. Everyone else is out in the yard, I'm sitting at my desk typing earphones or, music blasting through my head and look up surrounded by screws! Flashes of paranoia and real fear, but it's just a plain old C block shakedown--they look through my house-- a new guard getting broke in-- and left without taking a thing.

The unconscious or not consciously felt emotional void after your visit up here--the way it's straight back into penitentiary life or non-life when you leave, almost like I never saw you out there in the visiting room--the minute you're gone the whole world you bring with you disappears too, and I'm back in prison simply and wholly until the next time you come

Long live the People's Republic of China on this it's 21st anniversary! Long live the brilliant genius Chairman Mao Tse-tung! Long live the 800,000,000 brothers and sisters of China! 21 years ago this day marked a turning point in the history of the West so vast and deep that still hardly anyone understands it-- No more Amerikan West! No more Asian ripoffs for the capitalist dogs! No Coca-colas and Chryslers and electric toothbrushes for the toiling masses of the East! No Bank Amerikards in Peking! The dream of the Rockefellers and Fords blown to smithereens by the victory of peoples' war! Right on, people, right on! Dare to struggle, dare to Win!

Freezing cold in here all day, & a brother just hung himself in his cell in the gallery above mine - quiet is on this gallery like a pall or a sheet they rapped around the dead prisoner as they carried him past my cell on a stretcher just 15 minutes ago - weirdness & terror in the air, even the guards are affected. Some days it's hard to understand how any of us in here manage to keep ourselves from hanging it up like that - this is no place for men to be caged this is no place for men at all.