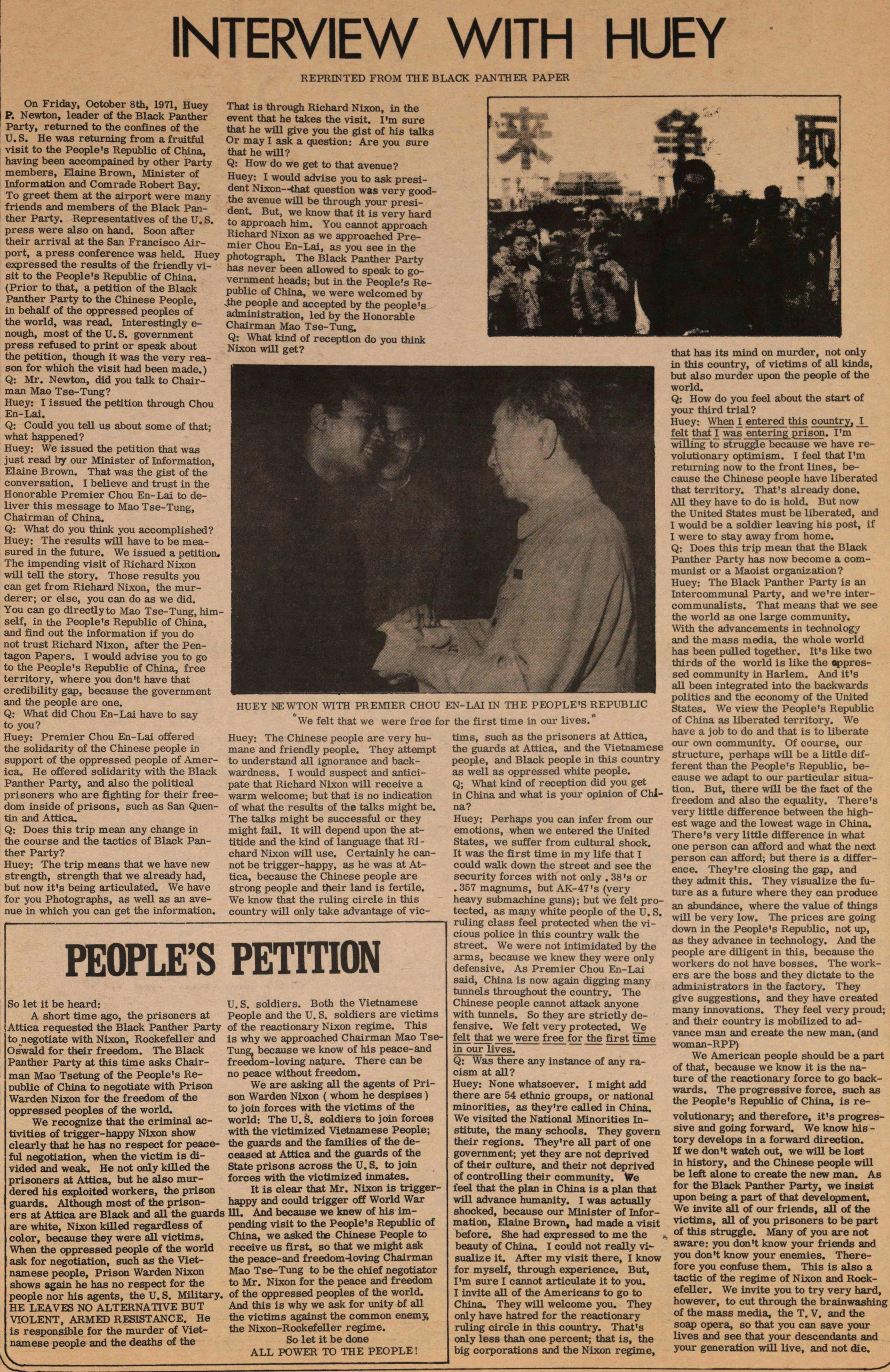 REPRINTED FROM THE BLACK PANTHER PAPER

On Friday, October 8th, 1971, Huey P. Newton, leader of the Black Panther Party, returned to the confines of the U. S. He was returning from a fruitful visit to the People's Republic of China, having been accompanied by other Party members, Elaine Brown, Minister of Information and Comrade Robert Bay. To greet them at the airport were many friends and members of the Black Panther Party. Representatives of the U. S. press were also on hand.

Soon after their arrival at the San Francisco Airport, a press conference was held. Huey expressed the results of the friendly visit to the People's Republic of China. (Prior to that, a petition of the Black Panther Party to the Chinese People, in behalf of the oppressed peoples of the world, was read. Interestingly enough, most of the U. S. government press refused to print or speak about the petition, though it was the very reason for which the visit had been made.)

Q: Mr. Newton, did you talk to Chairman Mao Tse-Tung?

Huey: I issued the petition through Chou En-Lai.

Q: Could you teil us about some of that; what happened?

Huey: We issued the petition that was just read by our Minister of Information, Elaine Brown. That was the gist of the conversation. I believe and trust in the Honorable Premier Chou En-Lai to deliver this message to Mao Tse-Tung, Chairman of China.

Q: What do you think you accomplished?

Huey: The results will have to be measured in the future. We issued a petition. The impending visit of Richard Nixon will tell the story. Those results you can get from Richard Nixon, the murderer; or else, you can do as we did. You can go directly to Mao Tse-Tung, himself, in the People's Republic of China, and find out the information if you do not trust Richard Nixon, after the Pentagon Papers. I would advise you to go to the People's Republic of China, free territory, where you don't have that credibility gap, because the government and the people are one.

Q: What did Chou En-Lai have to say to you?

Huey: Premier Chou En-Lai offered the solidarity of the Chinese people in support of the oppressed people of America. He offered solidarity with the Black Panther Party, and also the political prisoners who are fighting for their freedom inside of prisons, such as San Quentin and Attica.

Q: Does this trip mean any change in the course and the tactics of Black Panther Party?

Huey: The trip means that we have new strength, strength that we already had, but now it's being articulated. We have for you Photographs, as well as an avenue in which you can get the information. That is through Richard Nixon, in the event that he takes the visit. I'm sure that he will give you the gist of his talks Or may I ask a question: Are you sure that he will?

Q: How do we get to that avenue?

Huey: I would advise you to ask president Nixon- that question was very good the avenue will be through your president. But, we know that it is very hard to approach him. You cannot approach Richard Nixon as we approached Premier Chou En-Lai, as you see in the photograph. The Black Panther Party has never been allowed to speak to government heads; but in the People's Republic of China, we were welcomed by „the people and accepted by the people's administration, led by the Honorable Chairman Mao Tse-Tung.

Q: What kind of reception do you think Nixon will get?

Huey: The Chinese people are very humane and friendly people. They attempt to understand all ignorance and backwardness. I would suspect and anticipate that Richard Nixon will receive a warm welcome; but that is no indication of what the results of the talks might be. The talks might be successful or they might fail. It will depend upon the attitide and the kind of language that Richard Nixon will use. Certainly he cannot be trigger-happy, as he was at Attica, because the Chinese people are strong people and their land is fertile. We know that the ruling circle in this country will only take advantage of victims, such as the prisoners at Attica, the guards at Attica, and the Vietnamese people, and Black people in this country as well as oppressed white people.

Q; What kind of reception did you get in China and what is your opinion of China?

Huey: Perhaps you can infer from our emotions, when we entered the United States, we suffer from cultural shock. It was the first time in my life that I could walk down the street and see the security forces with not only . 38 's or . 357 magnums, but AK-47's (very heavy submachine guns) ; but we felt protected, as many white people of the U. S. ruling class feel protected when the vicious police in this country walk the street. We were not intimidated by the arms, because we knew they were only defensive. As Premier Chou En-Lai said, China is now again digging many tunnels throughout the country. The Chinese people cannot attack anyone with tunnels. So they are strictly defensive. We felt very protected. We felt that we were free for the first time in our lives.

Q: Was there any instance of any racism at all?

Huey: None whatsoever. I might add there are 54 ethnic groups, or national minorities, as they're called in China. We visited the National Minorities Institute, the many schools. They govern their regions. They're all part of one government; yet they are not deprived of their culture, and their not deprived of controlling their community. We feel that the plan in China is a plan that will advance humanity. I was actually shocked, because our Minister of Information, Elaine Brown, had made a visit before. She had expressed to me the beauty of China. I could not really visualize it. After my visit there, I know for myself, through experience. But, I'm sure I cannot articulate it to you. I invite all of the American to go to China. They will welcome you. They only have hatred for the reactionary ruling circle in this country. That's only less than one percent; that is, the big corporations and the Nixon regime, that has its mind on murder, not only in this country, of victims of all kinds, but also murder upon the people of the world.

Q: How do you feel about the start of your third trial?

Huey: When I entered this country, I felt that I was entering prison. I'm willing to struggle because we have revolutionary optimism. I feel that I'm returning now to the front lines, because the Chinese people have liberated that territory. That's already done. All they have to do is hold. But now the United States must be liberated, and I would be a soldier leaving his post, if I were to stay away from home.

Q: Does this trip mean that the Black Panther Party has now become a communist or a Maoist organization?

Huey: The Black Panther Party is an Intercommunal Party, and we 're intercommunalists. That means that we see the world as one large community. With the advancements in technology and the mass media, the whole world has been pulled together. It's like two thirds of the world is like the pressed community in Harlem. And it's all been integrated into the backwards politics and the economy of the United States. We view the People's Republic of China as liberated territory. We have a job to do and that is to liberate our own community. Of course, our structure, perhaps will be a little different than the People's Republic, because we adapt to our particular situation. But, there will be the fact of the freedom and also the equality. There's very little difference between the highest wage and the lowest wage in China. There's very little difference in what one person can afford and what the next person can afford; but there is a difference. They're closing the gap, and they admit this. They visualize the future as a future where they can produce an abundance, where the value of things will be very low. The prices are going down in the People's Republic, not up, as they advance in technology. And the people are diligent in this, because the workers do not have bosses. The workers are the boss and they dictate to the administrators in the factory. They give suggestions, and they have created many innovations. They feel very proud; and their country is mobilized to advance man and create the new man. (and woman-RPP) We American people should be a part of that, because we know it is the nature of the reactionary force to go backwards. The progressive force, such as the People's Republic of China, is revolutionary; and therefore, it's progressive and going forward. We know history develops in a forward direction. If we don 't watch out, we will be lost in history, and the Chinese people will be left alone to create the new man. As for the Black Panther Party, we insist upon being a part of that development. We invite all of our friends, all of the victims, all of you prisoners to be part of this struggle. Many of you are not aware: you don 't know your friends and you don 't know your enemies. Therefore you confuse them. This is also a tactic of the regime of Nixon and Rockefeller. We invite you to try very hard, however, to cut through the brainwashing of the mass media, the T. V. and the soap opera, so that you can save your lives and see that your descendants and your generation will live, and not die.