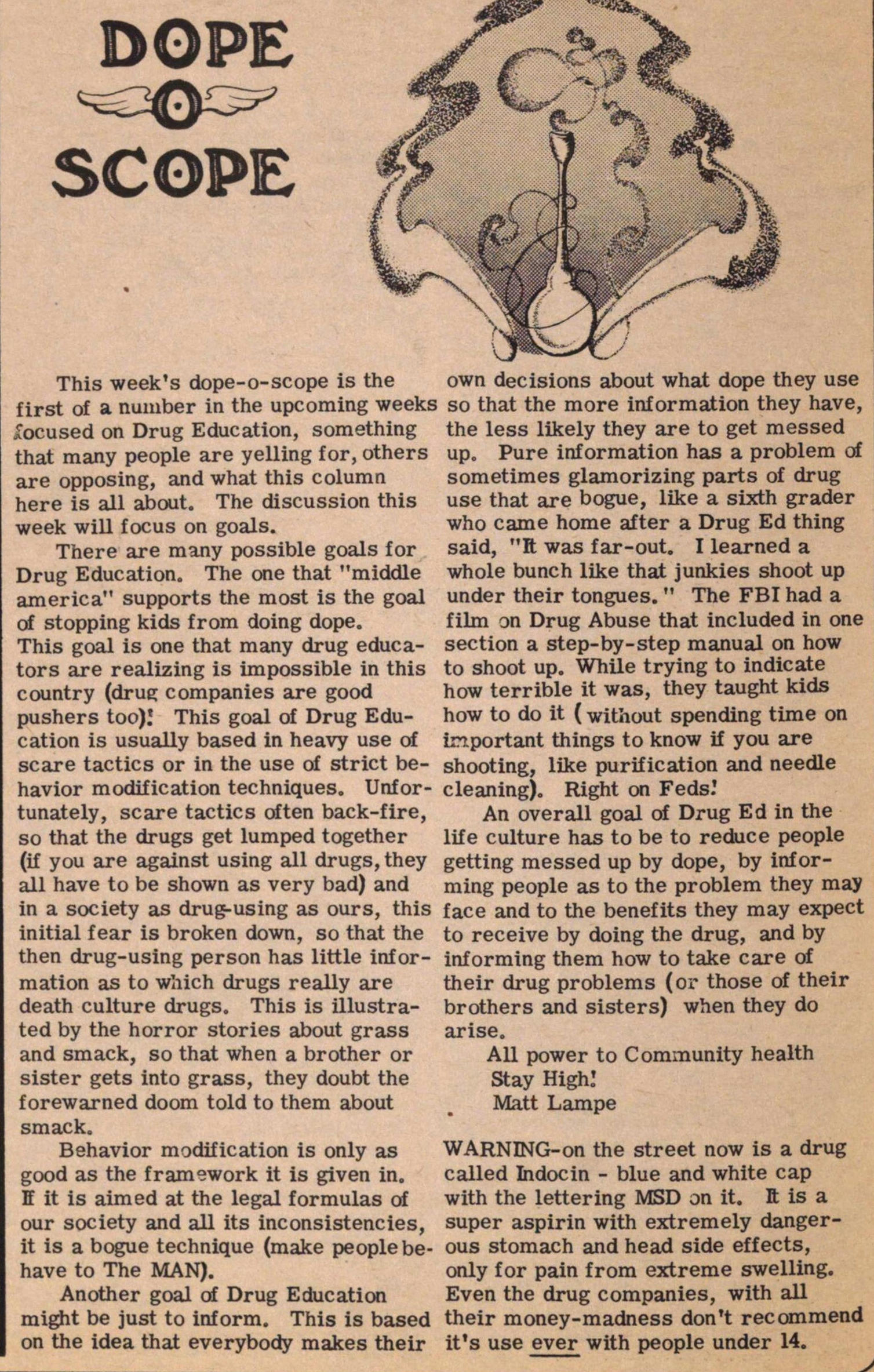 This week's dope-o-scope is the first of a number in the upcoming weeks iocused on Drug Education, something that many people are yelling f or, others are opposing, and what this column here is all about. The discussion this week will focus on goals. There are many possible goals for Drug Education. The one that "middle america" supports the most is the goal of stopping kids from doing dope. This goal is one that many drug educators are realizing is impossible in this country (drug companies are good pushers too)! This goal of Drug Education is usually based in heavy use of scare tactics or in the use of strict behavior modification techniques. Unfortunately, scare tactics aften back-fire, so that the drugs get lumped together (if you are against using all drugs, they all have to be shown as very bad) and in a society as drug-using as ours, this initial fear is broken down, so that the then drug-using person has little information as to which drugs really are death culture drugs. This is illustrated by the horror stories about grass and smack, so that when a brother or sister gets into grass, they doubt the forewarned doom told to them about smack. Behavior modification is only as good as the framework it is given in. ff it is aimed at the legal formulas oí our society and all its inconsistencies, it is a bogue technique (make people behave to The MAN). Another goal of Drug Education might be just to inf orm. This is based on the idea that everybody makes their own decisions about what dope they use so that the more inf ormation they have, the less likely they are to get messed up. Pure information has a problem of sometimes glamorizing parts of drug use that are bogue, like a sixth grader who came home after a Drug Ed thing said, "ft was far-out. I learned a whole bunch like that junkies shoot up under their tongues. " The FBI had a film on Drug Abuse that included in one section a step-by-step manual on how to shoot up. Whüe trying to indicate how terrible it was, they taught kids how to do it ( without spending time on inportant things to know if you are shooting, like purification and needie cleaning). Right on Feds.' An overall goal of Drug E d in the life culture has to be to reduce people getting messed up by dope, by inf orming people as to the problem they may face and to the benefits they may expect to receive by doing the drug, and by informing them how to take care of their drug problems (or those of their brothers and sisters) when they do arise. All power to Community health Stay High.' Matt Lampe WARNING-on the street now is a drug called Indocin - blue and white cap with the lettering MSD on it. K is a super aspirin with extremely dangerous stomach and head side effects, only f or pain f rom extreme swelling. Even the drug companies, with all their money-madness don 't recommend it's use ever with people under 14.