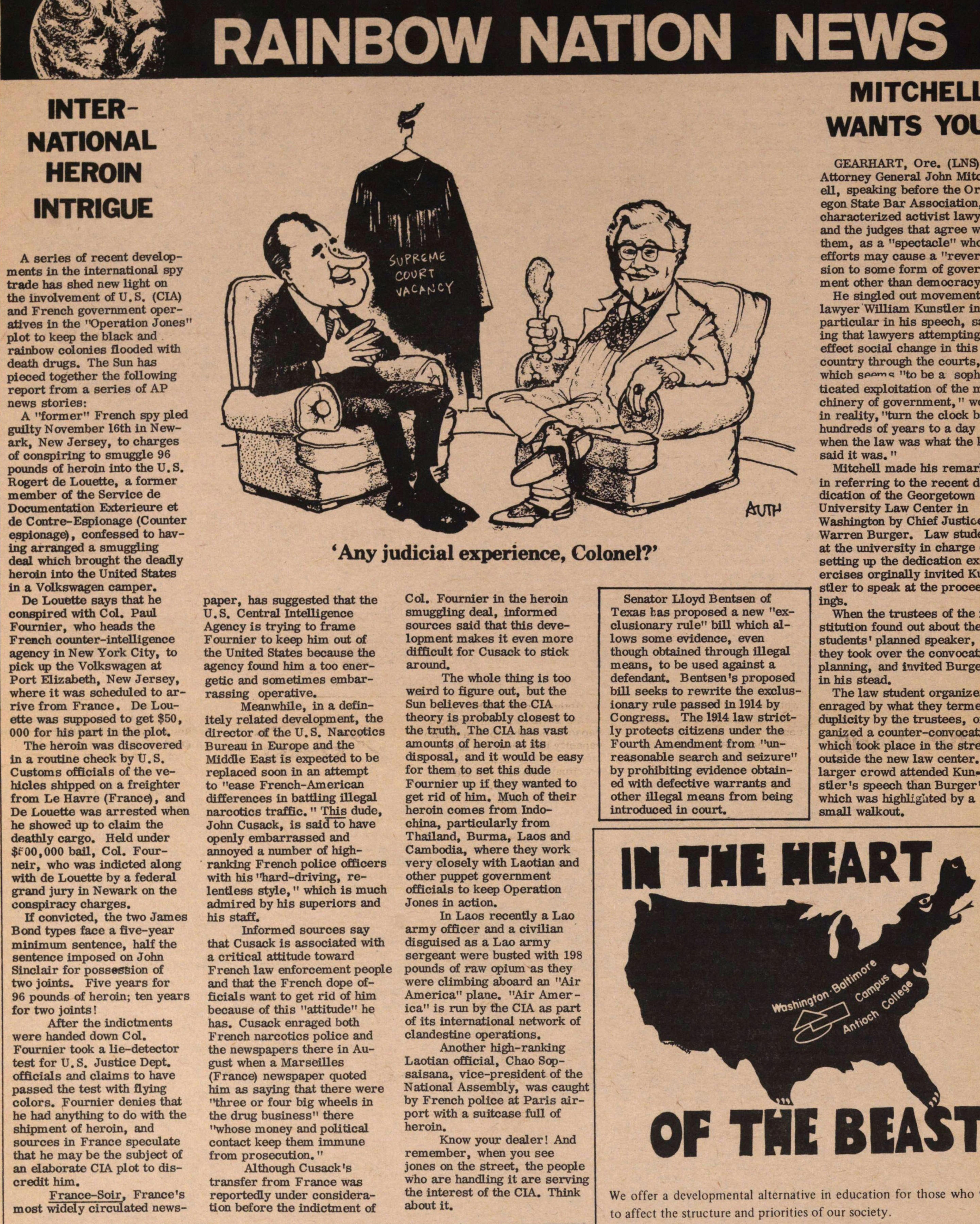 A serles of recent developments in the international spy trade bas sbed new light on the involvement of U.S. (CIA) and French govemment operaüves in the "Operation Jones" plot to keep the black and rainbow colonies flooded with death drugs. The Sun has pieced together the following report f rom a series of AP news stories: A "former" French spy pled guilty November 16th in Newark, New Jersey, to charges of conspiring to smuggle 96 pounds of heroin into the U. S. Rogert de Louette, a former member of the Service de Documentation Exterieure et de Contre-Espionage (Counter esplonage) , confessed to having arranged a smuggling deal which brought the deatfly heroin into the United States in a Volkswagen camper. De Louette says that he conspired with Col. Paul Fournier, who heads the French counter-intelligence agency in New York City, to piek up the Volkswagen at Port Elizabeth, New Jersey, where it was scheduled to arrlve from France . De Louette was supposed to get $50, 000 for his part in the plot. The heroin was discovered in a routine check by U. S. Customs officials of the vehicles shipped on a freighter from Le Havre (France) , and De Louette was arrested when he showod up to claim the deathly cargo. Held under $f00,000bail, Col. Fourneir, who was indicted along with de Louette by a federal grand jury in Newark on the conspiracy charges. If convicted, the two James Bond types face a five-year minimum sentence, half the sentence imposed on John Sinclair for possession of two joints. Five years for 96 pounds of heroin; ten years for two joints ! After the indictments were handed down Col. Fournier took a lie-detector test for U.S. Justice Dept. officials and claims to have passed the test with flying colors. Fournier derdes that he had anything to do with the shipment of heroin, and sources in France speculate that he may be the subject of an elabórate CIA plot to discredit him. France-Soir, France's most widely circulated paper, has suggested that the U.S. Central Intelligence Agency is trylng to frame Fournler to keep him out of the United States because the agency found him a too energetic and sometimes embarrassing operative. Meanwhile, in a definitely related development, the director of the U. S. Narcotics Bureau in Europe and the Middle East is expected to be replaced soon in an attempt to "ease French-American differences in batüing illegal narcotics traffic. " This dude, John Cusack, is said to have openly embarrassed and annoyed a number of highranking French pólice officers with nis "hard-driving, relenüess style, " which is much admired by hls superiors and nis staff. Informed sources say that Cusack is associated with a critical attitude toward French law enforcement people and that the French dope officials want to get rid of him because of this "attitude" he has. Cusack enraged both French narcotics pólice and the newspapers there in August when a Marseilles (France) newspaper quoted him as saying that there were "three or four big wheels in the drug business" there "whose money and political contact keep them immune from prosecution. " Although Cusack 's transfer from France was reportedly under consideraüon before the indictment of Col. Fournier In the heroin smuggling deal, informed sources said that this development makes it even more difficult for Cusack to stick around. The whole thing is too weird to flgure out, but the Sun believes that the CIA theory is probably closest to the truth. The CIA has vast amounts of heroin at its disposal, and it would be easy for thcm to set this dude Fournier up if they wanted to get rid of him. Much of their heroin comes from Indochina, parücularly from Thailand, Burma, Laos and Cambodia, where they work very closely with Laotian and other puppet government officials to keep Operation Jones in action. In Laos recently a Lao army ofñcer and a civüian disguised as a Lao army sergeant were busted with 198 pounds of raw opium as they were climbing aboard an "Air America" plaae. "Air America" is run by the CIA as part of its international network of clandestino operations. Another ranking Laotian official, Chao Sopsaisana, vice-president of the National Assembly, was caught by French pólice at Paris airport with a suitcase full of heroin. Know your dealer ! And remember, when you see jones on the street, the people who are handling it are serving the interest of the CIA. Think about it. Senator Lloyd Dentsen of Texas bas proposed a new "exclusionary rule" bilí which allows some evidence, even though obtained through ülegal means, to be used against a defendant. Bentsen's proposed bill seeks to rewrite the exclusionary rule passed in 1914 by Congress. The 1914 law strictly protects citizens under the Fourth Amendment from "unreasonable search and seizure" by pr ohibiting evidence obtained with def ective warrants and other ülegal means from being introduced in court.