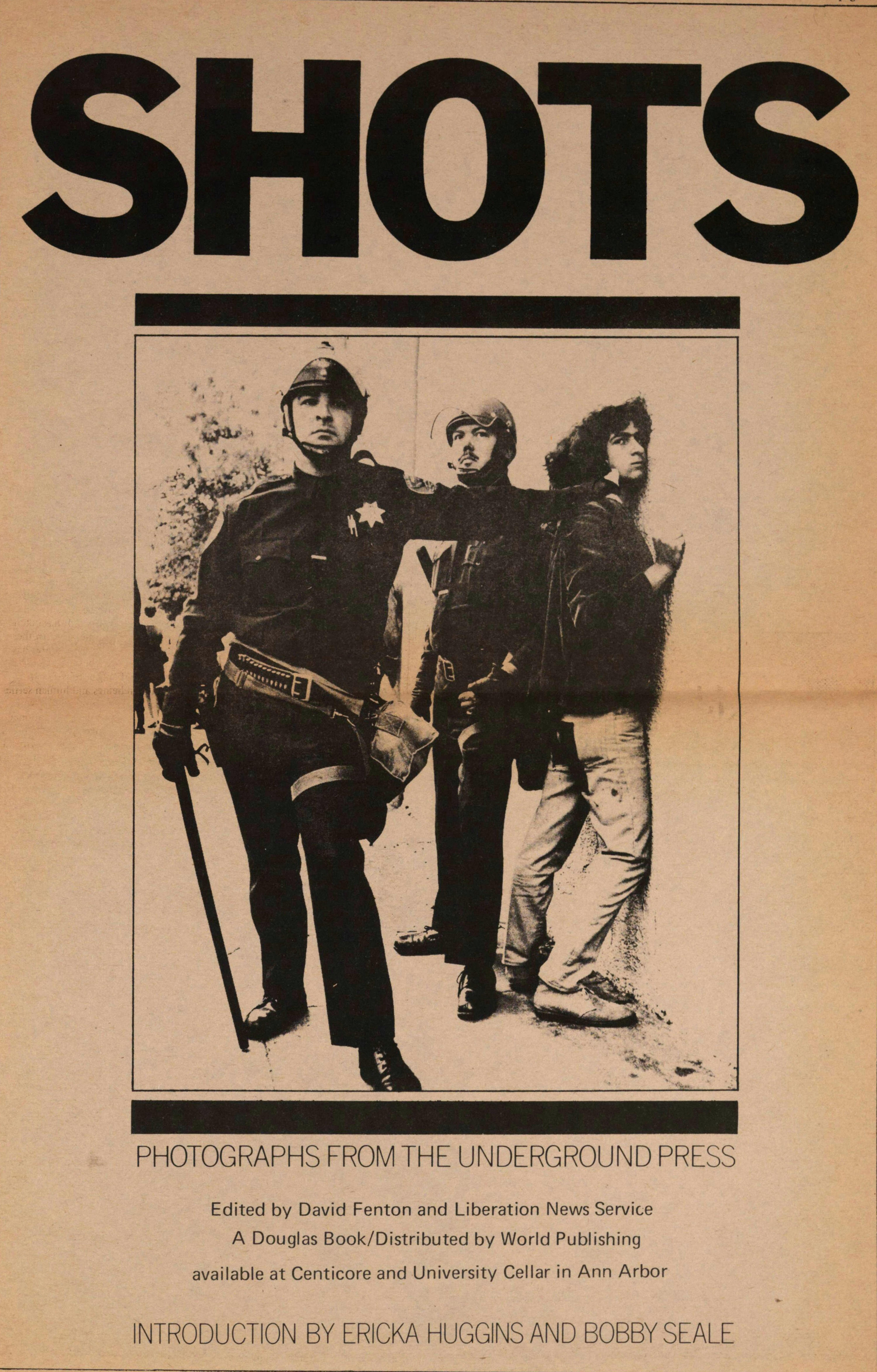 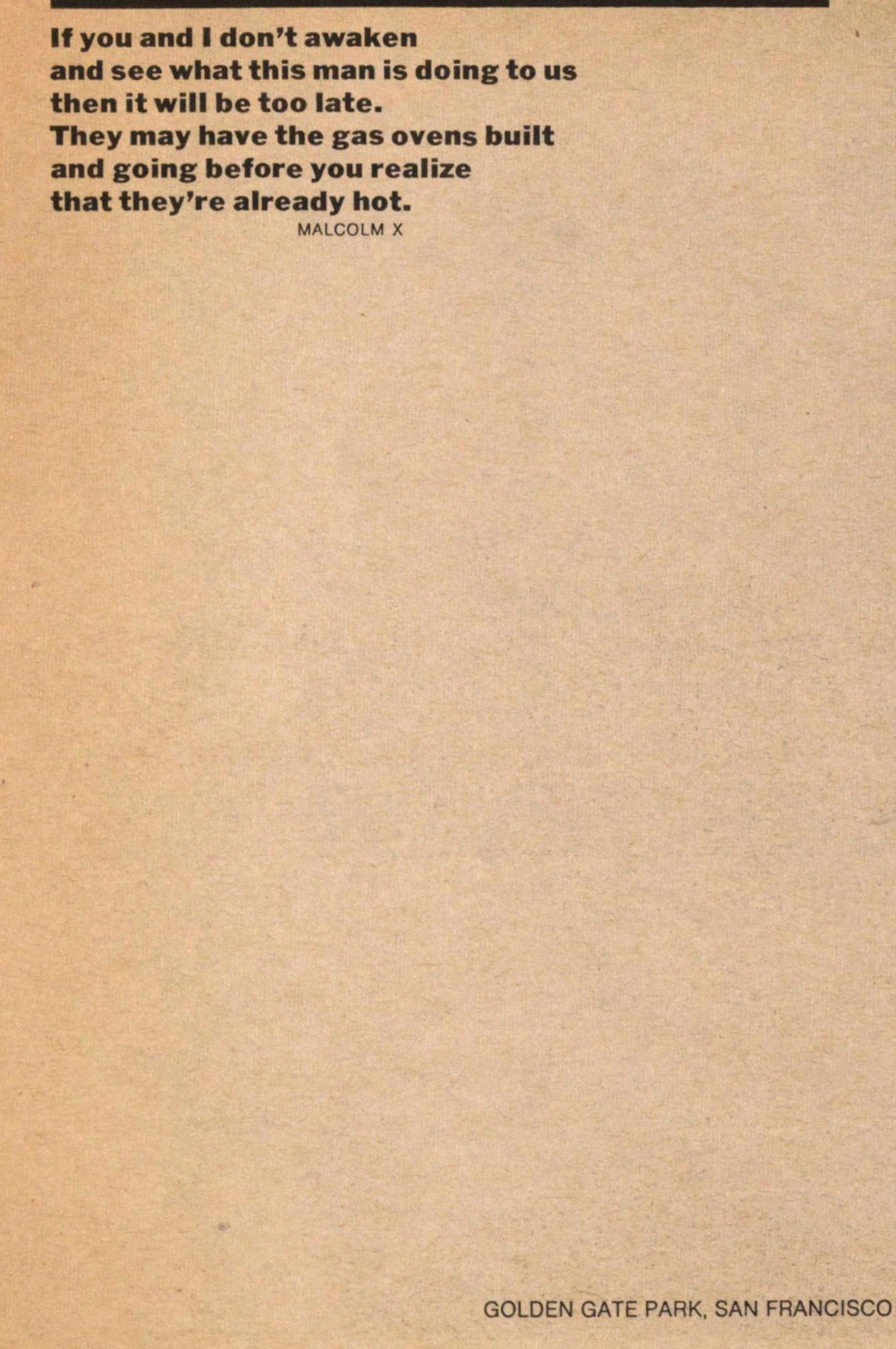 Edited by David Fenton and Liberation News Service A Douglas Book Distributed by World Publishing available at Centicore and University Cellar in Ann Arbor INTRODUCTION BY ERICKA HUGGINS AND BOBBY SEALE If you and I don't awaken and see what this man is doing to us then it will be too late. They may have the gas ovens built and going before you realize that they're already hot. MALCOLM X Shots, snapshots of the people in action, n depression, in love, in degradation, of the great Amerikan way of life and death, shit shots of the stagnant, decaying society that we will live in until we change it. And if they keep pressuring us, the poor, the oppressed, if the silent majority follows the leaders of nationwide fascist oppression and repression. if the nation splits in practice into the people's camp and the enemy's camp, if we cannot change this country any other way, we will have to follow the example of oppressed people throughout history, we will have to change it all with gunshots. Sitting here looking at beautiful pictures, beautiful because they are descriptive of all that occurs in Amerika and ugly because what is occurring n Amerika is ugly. I just came across a picture of an Indian brother, and the quote says, "Our struggle will go on so long as the grass shall grow, sun will shine, and rivers flow to the sea."That's beautiful; that's beautiful to me because it's evident everyday that the people of Amerika through all the chaos see the beauty. The quote doesn't say that the struggle will go on as long as the people live; it doesn't say just that. It says that the struggle will go on as long as the beautiful things of the universe exist. And I come across a picture of Brother Fred and it's really sad that there has to be such a book as this, that people need to be confronted with the violence and the decadence of Amerikan society, that they have to look through a book like this in order to see what's going on, that the truth has to glare out at them in black and white . before some can understand what's really happening. It would be much nicer f the book could be all about babies and people loving each other and nice shit like that. But Nixon and Agnew and Mitchell, etc., etc., have proven that they aren't going to let us live in a normal way; they're going to make us live like all the other poor and oppressed people in the world. I come across a picture of a Vietnamese, revolutionary woman and Nixon strikes again. It's just so vast the hurt that Amerika causes. It's an octopus with gigantic tentacles reaching out all over the earth and even into the solar system, on to the moon, universal imperialism. Well, I could go on and on with words, and try to convey the importance of the photographs, the importance of the words "seize the time," the meaning of the words "all power should be placed in the hands of the people," but living twenty-two years in Amerika has taught me that words are futile, that the best way of telling is doing. Ericka Huggins Niantic Concentration Camp November, 1970 Today the locust fights the elephant, but tomorrow the elephant will be disemboweled. HO CHI MINH