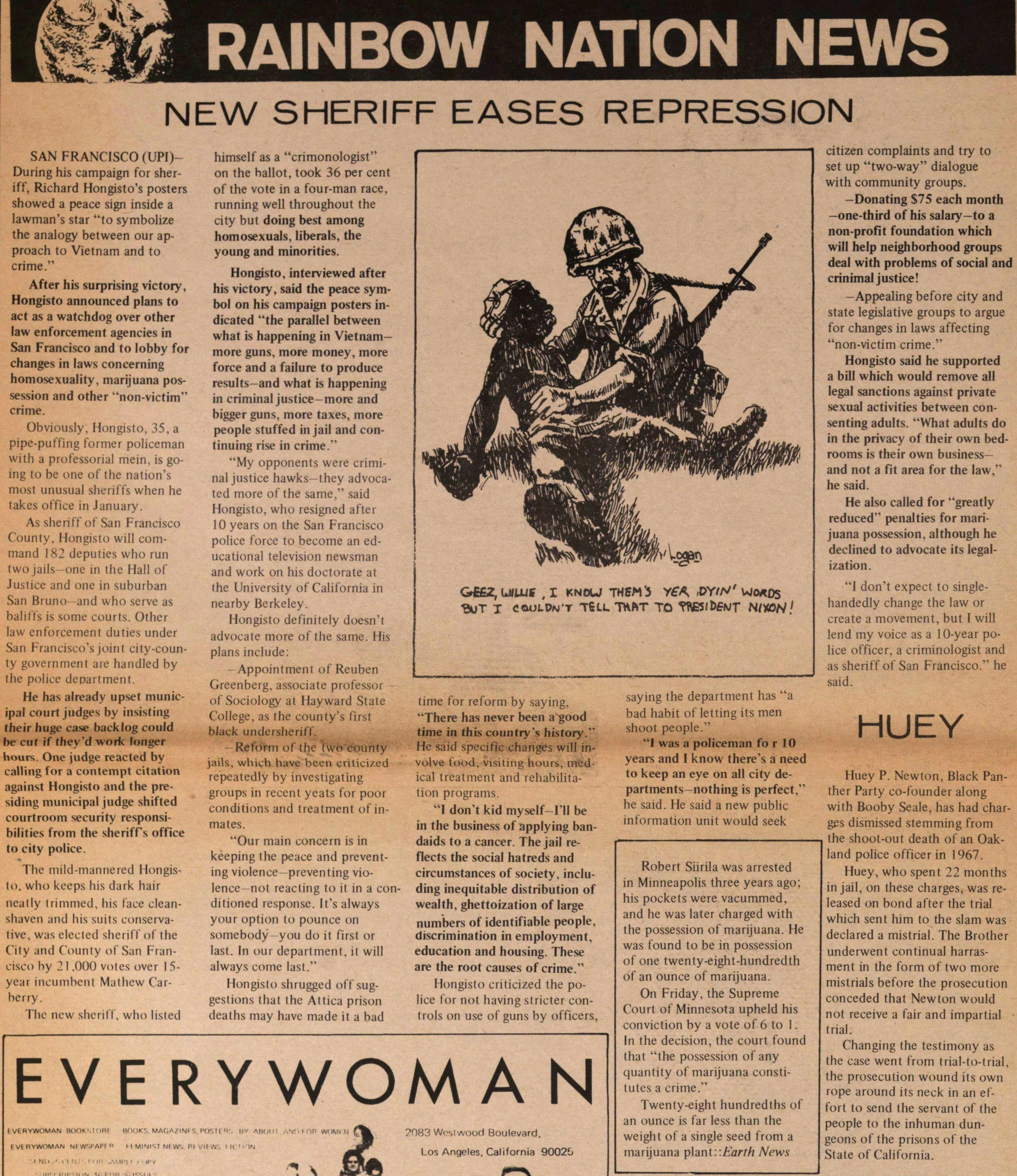 SAN FRANCISCO (UPI)During his campaign for sheriff, Richard Hongisto's posters showed a peace sign inside a Iawnman's star "to symbolize the analogy between our approach to Vietnam and to crime." Aft er his surprising victory, Hongisto announced plans to act as a watchdog over other law enforcement agencies in San Francisco and to lobby for changes in laws concerning homosexuality, marijuana possession and other "non-victim" crime. Obviously, Hongisto, 35, a pipe-puffing former policeman with a professorial mein, is going to be one of the nation's most unusual sheriffs when he takes office in January. As sheriff of San Francisco County. Hongisto will command 182 deputies who run two jails-one in the Hall of Justice and one in suburban San Bruno and who serve as baliffs is some courts. Other law enforcement duties under San Francisco's joint city-county government are handled by the police department. He has already upset municipal court judges by insisting their huge case backlog could be cut if they'd work longer hours. One judge reacted by calling for a contempt citation against Hongisto and the presiding municipal judge shifted courtroom security responsibilities from the sheriffs office to city police. The mild-mannered Hongisto, who keeps his dark hair really trimmed. his face clean shaven and his suits conservative, was elected sheriff of the City and County of San Francisco by 11,000 votes over 15 year incumbent Matlthew Carberry. The new sheriff, who listed himself as a "crimonologist" on the ballot, took 36 percent of the vote in a four-man race. running well throughout the city but doing best among homosexuals, liberals, the young and minorities. Hongisto, interviewed after his victory, said the peace symbol on his campaign posters in dictated "the parallel between what is happening in Vietnam- more guns, more money, more force and a failure to produce results- and what is happening in criminal justice- more and bigger guns, more taxes, more people stuffed in jail and continuing rise in crime." "My opponents were criminal justice hawks-they advocated more of the same," said Hongisto, who resigned after 10 years on the San Francisco police force to become an educational television newsman and work on his doctorate at the University of California in nearby Berkeley. Hongisto definitely doesn't advocate more of the same. His plans include: Appointment of Reuben Greenberg, associate professor of Sociology at Hayward State College, as the county's first black undersheriff. Reform of the Iwo county jails, which have been criticized repeatedly by investigating groups in recent years for poor conditions and treatment of inmates. "Our main concern is in keeping the peace and preventing preventing violence not reacting to it in a conditioned response. It's always your option to pounce on somebody you do it first or last. In our department, it will always come last." Hongisto shrugged off suggestions that the Attica prison deaths may have made it a bad time for reform by saying, "There has never been a good time n this country's hi.story." He said specific changes will involve food, visiting hours. medical treatment and rehabilitation programs. "I don't kid myself - I'll be in the business of applying bandaids to a cancer. The jail reflects the social hatreds and circumstances of society, including inequitable distribution of wealth, ghettoization of large numbers of identifiable people, discrimination in employment, education and housing. These are the root causes of crime." Hungisto criticized the police for not having stricter controls on use shotguns by officers, saying the department has "a bad habit of letting its men school people." "I was a policeman for 10 years and I know there's a need to keep an eye on all city departments-nothing s perfect," he said. He said a new public information unit would seek citizen complaints and try to set up "two-way" dialogue with community groups. -Donating $75 each month - one-third of his salary- to a non-profit foundation which will help neighborhood groups deal with problems of social and crinimal justice! -Appealing before city and state legislative groups to argue for changes in laws affecting "non-victim crime." Hongisto said he supported a bill which would remove all legal sanctions against private sexual activities between consenting adults. "What adults do in the privacy of their own bedrooms is their own business- and not a fit area for the law," he said. He also called for "greatly reduced" penalties for marijuana possession, although he declined to advocate its legalization. "I don't expect to single handedly change the law or create a movement, but I will lend my voice as a 10-year police officer, a criminologist and as sheriff of San Francisco." he said. Robert Siirila was arrested in Minneapolis three years ago; his pockets were vacummed, and he was later charged with the possession of marijuana. He was found to be in possession of one twenty-eight-hundredth of an ounce of marijuana. On Friday, the Supreme Court of Minnesota upheld his conviction by a vote of 6 to 1 . In the decision, the court found that "the possession of any quantity of marijuana constitutes a crime." Twenty-eight hundredths of an ounce is far less than the weight of a single seed from a marijuana plant: .Earth News