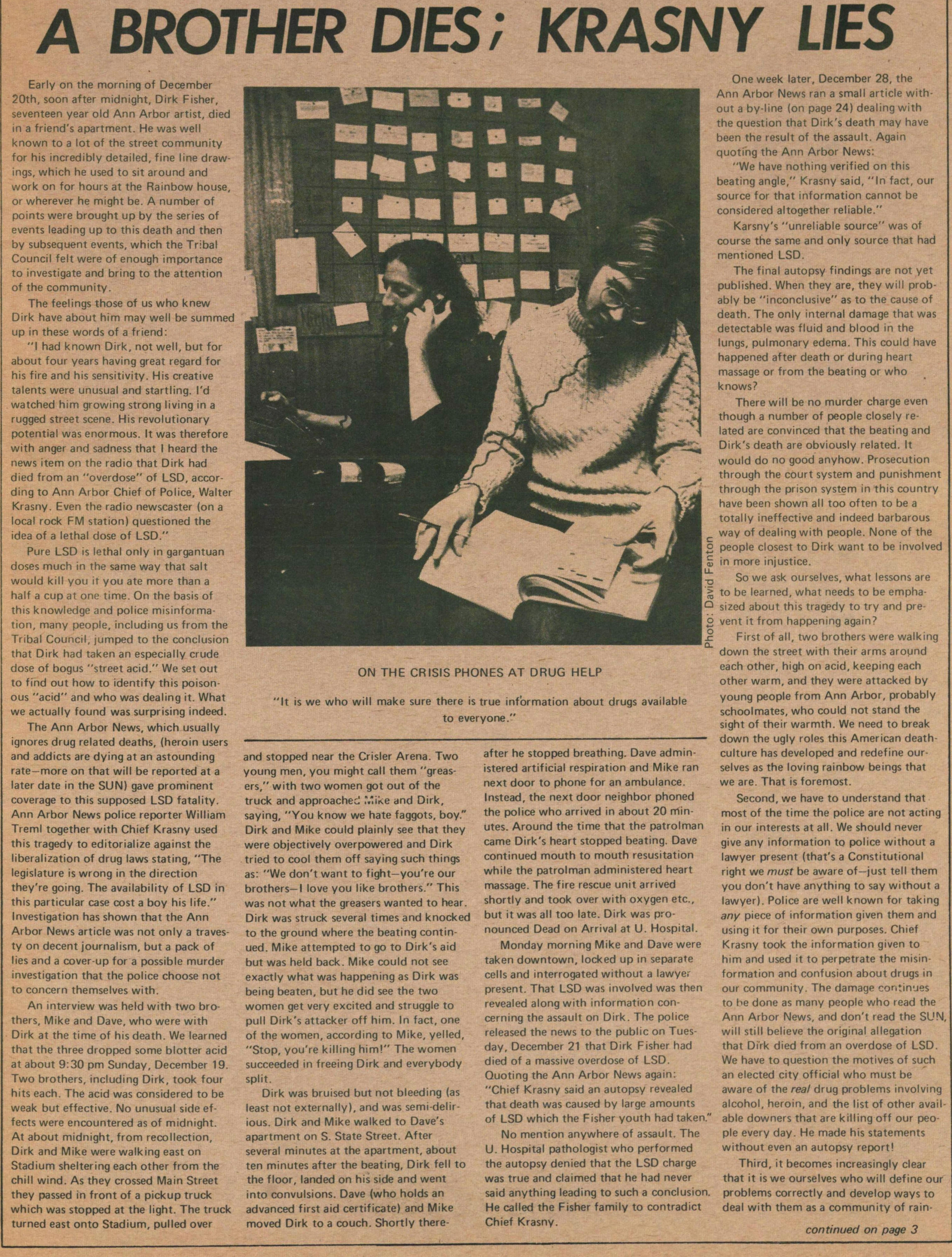 Early on the morning of December 2Oth, soon after midnight, Dirk Fisher, seventeen year old Ann Arbor artist, died in a friend's apartment.  He was well known to a lot of the street community for his incredibly detailed, fine line drawings, which he used to sit around and work on for hours at the Rainbow house, or wherever he might be.  A number of points were brought up by the series of events leading up to this death and then by subsequent events, which the Tribal Council felt were of enough importance to investigate and bring to the attention of the community.

The feelings those of us who knew Dirk have about him may well be summed up in these words of a friend:

"I had known Dirk, not well, but for about four years having great regard for his fire and his sensitivity.  His creative talents were unusual and startling.  l'd watched him growing strong living in a rugged street scene.  His revolutionary potential was enormous.  It was therefore with anger and sadness that I heard the news item on the radio that Dirk had died from an "overdose" of LSD, according to Ann Arbor Chief of Police, Walter Krasny.  Even the radio newscaster (on a local rock FM station) questioned the idea of a lethal dose of LSD."

Pure LSD is lethal only in gargantuan doses much in the same way that salt would kill you if you ate more than a half a cup at one time.  On the basis of this knowledge and police misinformation, many people, including us from the Tribal Council, jumped to the conclusion that Dirk had taken an especially crude dose of bogus "street acid."  We set out to find out how to identify this poisonous "acid" and who was dealing it.  What we actually found was surprising indeed.

The Ann Arbor News, which usually ignores drug related deaths, (heroin users and addicts are dying at an astounding rate--more on that will be reported at a later date in the SUN) gave prominent coverage to this supposed LSD fatality.  Ann Arbor News police reporter William Treml together with Chief Krasny used this tragedy to editorialize against the liberalization of drug laws stating, "The legislature is wrong in the direction they're going.  The availability of LSD in this particular case cost a boy his life."  Investigation has shown that the Ann Arbor News article was not only a travesty on decent journalism, but a pack of lies and a cover-up for a possible murder investigation that the police choose not to concern themselves with.

An interview was held with two brothers, Mike and Dave, who were with Dirk at the time of his death.  We learned that the three dropped some blotter acid at about 9:30 pm Sunday, December 19.  Two brothers, including Dirk, took four hits each.  The acid was considered to be weak but effective.  No unusual side effects were encountered as of midnight.  At about midnight, from recollection, Dirk and Mike were walking east on Stadium sheltering each other from the chill wind.  As they crossed Main Street they passed in front of a pickup truck which was stopped at the light.  The truck turned east onto Stadium, pulled over and stopped near the Crisler Arena.  Two young men, you might call them "greasers," with two women got out of the truck and approached Mike and Dirk, saying, "You know we hate faggots, boy."  Dirk and Mike could plainly see that they were objectively overpowered and Dirk tried to cool them off saying such things as:  "We don't want to fight--you're our brothers--I love you like brothers."  This was not what the greasers wanted to hear.  Dirk was struck several times and knocked to the ground where the beating continued.  Mike attempted to go to Dirk's aid but was held back.  Mike could not see exactly what was happening as Dirk was being beaten, but he did see the two women get very excited and struggle to pull Dirk's attacker off him.  In fact, one of the women, according to Mike, yelled, "Stop, you're killing him!"  The women succeeded in freeing Dirk and everybody split.

Dirk was bruised but not bleeding (at least not externally), and was semi-delirious.  Dirk and Mike walked to Dave's apartment on S. State Street.  After several minutes at the apartment, about ten minutes after the beating, Dirk fell to the floor, landed on his side and went into convulsions.  Dave (who holds an advanced first aid certificate) and Mike moved Dirk to a couch.  Shortly thereafter he stopped breathing.  Dave administered artificial respiration and Mike ran next door to phone for an ambulance.  Instead, the next door neighbor phoned the police who arrived in about 20 minutes.  Around the time that the patrolman came Dirk's heart stopped beating.  Dave continued mouth to mouth resuscitation while the patrolman administered heart massage.  The fire rescue unit arrived shortly and took over with oxygen etc, but it was all too late.  Dirk was pronounced Dead on Arrival at U. Hospital.

Monday morning Mike and Dave were taken downtown, locked up in separate cells and interrogated without a lawyer present.  That LSD was involved was then revealed along with information concerning the assault on Dirk.  The police released the news to the public on Tuesday.  December 21 that Dirk Fisher had died of a massive overdose of LSD.  Quoting the Ann Arbor News again:  "Chief Krasny said an autopsy revealed that death was caused by large amounts of LSD which the Fisher youth had taken."

No mention anywhere of assault.  The U. Hospital pathologist who performed the autopsy denied that the LSD charge was true and claimed that he had never said anything leading to such a conclusion.  He called the Fisher family to contradict Chief Krasny.

One week later. December 28, the Ann Arbor News ran a small article without a by-line (on page 24) dealing with the question that Dirk's death may have ) been the result of the assault.  Again quoting the Ann Arbor News:

"We have nothing verified on this beating angle," Krasny said, "In fact, our source for that information cannot be considered altogether reliable."

Karsny's "unreliable source" was of course the same and only source that had mentioned LSD.

The final autopsy findings are not yet published.  When they are, they will probably be "inconclusive" as to the cause of death.  The only internal damage that was detectable was fluid and blood in the lungs, pulmonary edema.  This could have happened after death or during heart massage or from the beating or who knows?

There will be no murder charge even though a number of people closely related are convinced that the beating and Dirk's death are obviously related.  It would do no good anyhow.  Prosecution through the court system and punishment through the prison system in this country have been shown all too often to be a totally ineffective and indeed barbarous way of dealing with people.  None of the people closest to Dirk want to be involved in more injustice.

So we ask ourselves, what lessons are to be learned, what needs to be emphasized about this tragedy to try and prevent it from happening again?

First of all, two brothers were walking down the street with their arms around each other, high on acid, keeping each other warm, and they were attacked by young people from Ann Arbor, probably schoolmates, who could not stand the sight of their warmth.  We need to break down the ugly roles this American death-culture has developed and redefine ourselves as the loving rainbow beings that we are.  That is foremost.

Second, we have to understand that most of the time the police are not acting in our interests at all.  We should never give any information to police without a lawyer present (that's a Constitutional right we must be aware of--just tell them you don't have anything to say without a lawyer).  Police are well known for taking any piece of information given them and using it for their own purposes.  Chief Krasny took the information given to him and used it to perpetrate the misinformation and confusion about drugs in our community.  The damage continues to be done as many people who read the Ann Arbor News, and don't read the SUN, will still believe the original allegation that Dirk died from an overdose of LSD.  We have to question the motives of such an elected city official who must be aware of the real drug problems involving alcohol, heroin, and the list of other available downers that are killing off our people every day.  He made his statements without even an autopsy report!

Third, it becomes increasingly clear that it is we ourselves who will define our problems correctly and develop ways to deal with them as a community of rain

bow people.  It is we who in the end will make sure there is true information about druqs available to everyone.  Programs like Drug Help (phone 761-HELP) in the Washington Street Community Center are there for general and crisis information and help.  There are also extended study courses available now such as the special Psych 400, Section I class being offered at the U of M.  Called Drugs and Behavior, it plans on discussing topics like crisis intervention and treatment, altered states of consciousness, history and legal issues of drugs, and black perspectives.  It's being put together by community people and is FREE to the community, all are welcome.  For information call 764-9279 (students get 3 hours credit).

Lastly, if you ever need quick crisis medical care, call the fire department.  Their rescue squad, although not all they could be, is speedy and does have equipment.  The need for all of us to know some basic first aid is becoming more apparent all the time.  Again, self-determination is the key, understanding that the people in control of the resources and power now most often do not work in any interest but their own--check out the Free People's Clinic in the Community Center as an alternative for dealing with all kinds of medical problems.

This is as far as we can go at this point.  Steps are being made to set up an appointment with Chief Krasny and representatives from the Tribal Council People's Drugs Committee to see what the potential is for resolving some of the contradictions between that office and the community.  The misinformation about drugs that is rampant has been a major problem for a long time; it's a drag that it took Dirk's death to make the point all the more clear.  Chief Krasny made a terribly wrong statement that we feel must be cleared up publicly.  Dirk is gone and we will miss him.

ON THE CRISIS PHONES AT DRUG HELP

"It is we who will make sure there is true information about drugs available to everyone."