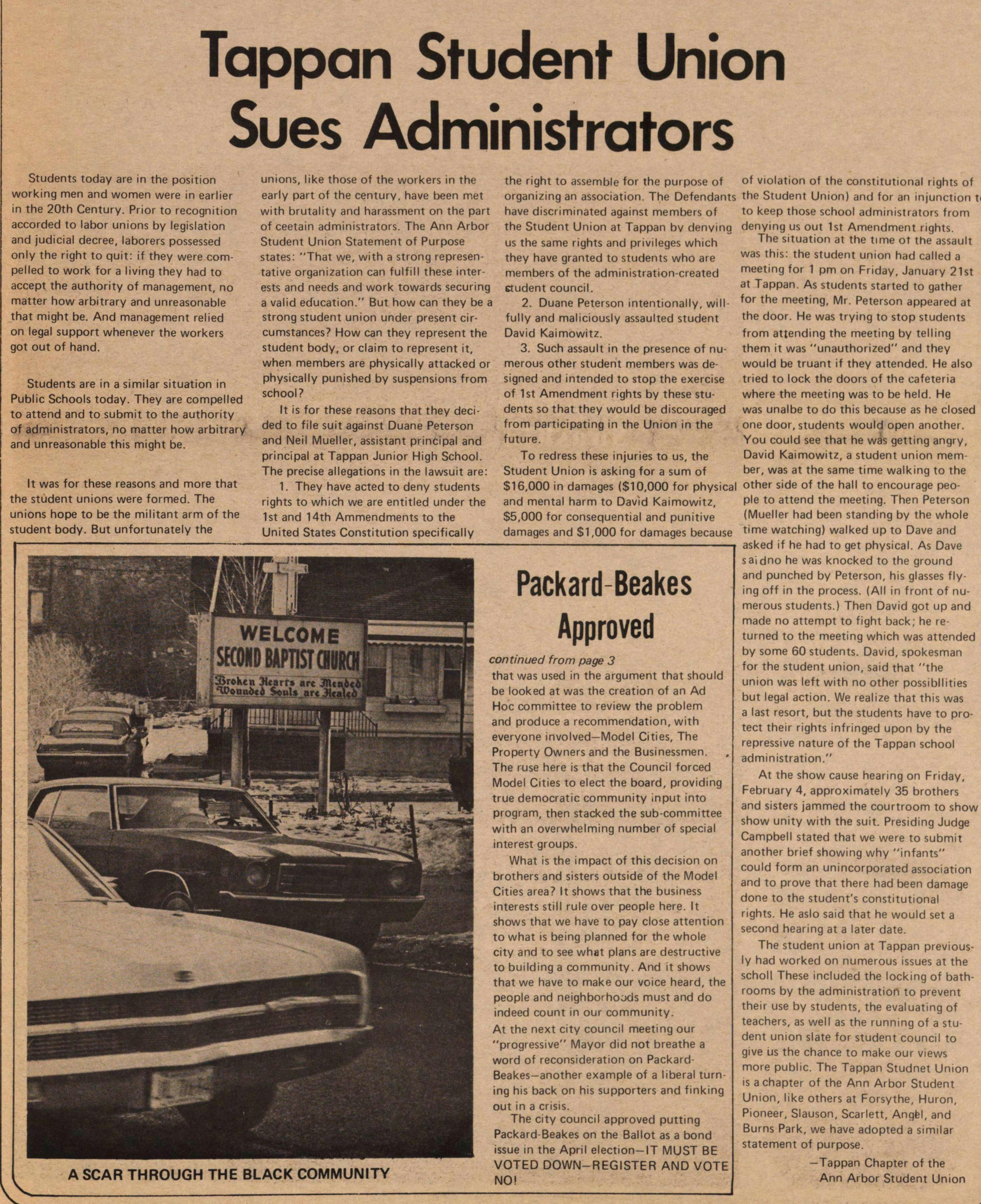 Students today are in the position working men and women were in earlier in the 20th Century. Prior to recognition accorded to labor unions by legislation and judicial decree, laborers possessed only the right to quit: if they were compelled to work for a living they had to accept the authority of management, no matter how arbitrary and unreasonable that might be. And management relied on legal support whenever the workers got out of hand.

Students are in a similar situation in Public Schools today. They are compelled to attend and to submit to the authority of administrators, no matter how arbitrary and unreasonable this might be.

It was for these reasons and more that the student unions were formed. The unions hope to be the militant arm of the student body. But unfortunately the unions, like those of the workers in the early part of the century, have been met with brutality and harassment on the part of ceretain administrators. The Ann Arbor Student Union Statement of Purpose states: "That we, with a strong representative organization can fulfill these interests and needs and work towards securing a valid education." But how can they be a strong student union under present circumstances? How can they represent the student body, or claim to represent it, when members are physically attacked or physically punished by suspensions from school?

It is for these reasons that they decided to file suit against Duane Peterson and Neil Mueller, assistant principal and principal at Tappan Junior High School. The precise allegations in the lawsuit are:

1. They have acted to deny students rights to which we are entitled under the 1st and 14th Ammendments to the United States Constitution specifically the right to assemble for the purpose of organizing an association. The Defendants have discriminated against members of the Student Union at Tappan by denying us the same rights and privileges which they have granted to students who are members of the administration-created student council.

3. Such assault in the presence of numerous other student members was designed and intended to stop the exercise of 1st Amendment rights by these students so that they would be discouraged from participating in the Union in the future.

To redress these injuries to us, the Student Union is asking for a sum of $16,000 in damages ($10,000 for physical and mental harm to David Kaimowitz, $5,000 for consequential and punitive damages and $1,000 for damages because of violation of the constitutional rights of the Student Union) and for an injunction to keep those school administrators from denying us out 1st Amendment rights.

The situation at the time ot the assault was this: the student union had called a meeting for 1 pm on Friday, January 21st at Tappan. As students started to gather for the meeting. Mr. Peterson appeared at the door. He was trying to stop students from attending the meeting by telling them it was "unauthorized" and they would be truant if they attended. He also tried to lock the doors of the cafetería where the meeting was to be held. He was unalbe to do this because as he closed one door, students would open another. You could see that he was getting angry, David Kaimowitz, a student union member, was at the same time walking to the other side of the hall to encourage people to attend the meeting. Then Peterson (Mueller had been standing by the whole time watching) walked up to Dave and asked if he had to get physical. As Dave said no he was knocked to the ground and punched by Peterson, his glasses flying off in the process. (All in front of numerous students.) Then David got up and made no attempt to fight back; he returned to the meeting which was attended by some 60 students. David, spokesman for the student union, said that "the union was left with no other possibllities but legal action. We realize that this was a last resort, but the students have to protect their rights infringed upon by the repressive nature of the Tappan school administration."

At the show cause hearing on Friday, February 4, approximately 35 brothers and sisters jammed the courtroom to show show unity with the suit. Presiding Judge Campbell stated that we were to submit another brief showing why "infants" could form an unincorporated association and to prove that there had been damage done to the student's constitutional rights. He aslo said that he would set a second hearing at a later date.

The student union at Tappan previously had worked on numerous issues at the scholl. These included the locking of bathrooms by the administration to prevent their use by students, the evaluating of teachers, as well as the running of a student union slate for student council to give us the chance to make our views more public. The Tappan Student Union is a chapter of the Ann Arbor Student Union, like others at Forsythe, Huron, Pioneer, Slauson, Scarlett, Angel, and Burns Park, we have adopted a similar statement of purpose.