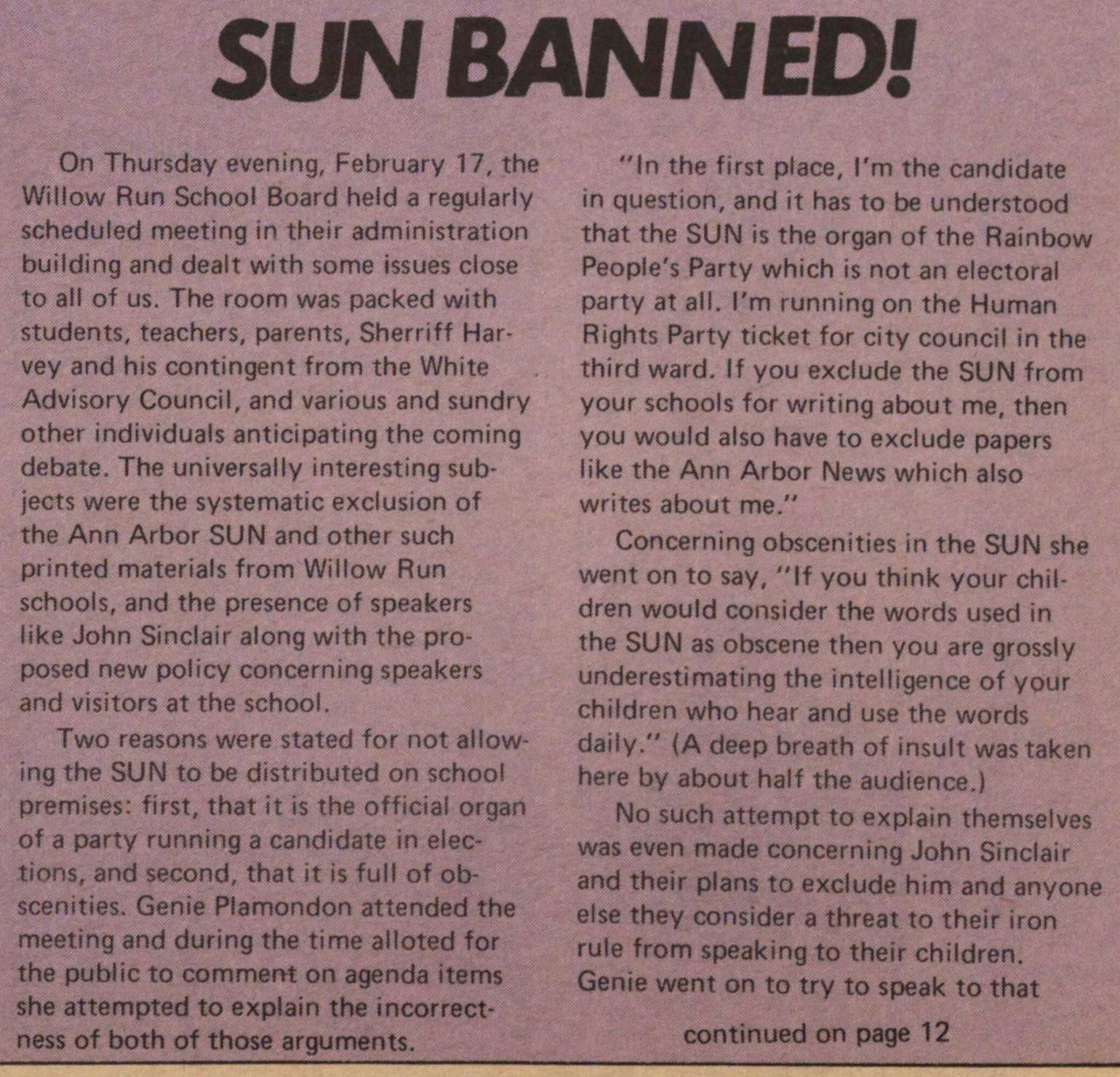 On Thursday evening, February 17, the Willow Run School Board held a regularly scheduled meeting in their administration building and dealt with some issues close to all of us. The room was packed with students, teachers, parents, Sheriff Harvey and his contingent from the White Advisory Council, and various and sundry other individuals anticipating the coming debate. The universally interesting subjects were the systematic exclusion of the Ann Arbor SUN and other such printed materials from Willow Run schools, and the presence of speakers like John Sinclair along with the proposed new policy concerning speakers and visitors at the school.

Two reasons were stated for not allowing the SUN to be distributed on school premises: first, that it is the official organ of a party running a candidate in elections, and second, that it is full of obscenities. Genie Plamondon attended the meeting and during the time allotted for the public to comment on agenda items she attempted to explain the incorrectness of both of those arguments.

"In the first place, l'm the candidate in question, and it has to be understood that the SUN is the organ of the Rainbow People's Party which is not an electoral party at all. l'm running on the Human Rights Party ticket for city council in the third ward. If you exclude the SUN from your schools for writing about me, then you would also have to exclude papers like the Ann Arbor News which also writes about me."

Concerning obscenities in the SUN she went on to say, "If you think your children would consider the words used in the SUN as obscene then you are grossly underestimating the intelligence of your children who hear and use the words daily." (A deep breath of insult was taken here by about half the audience.)

No such attempt to explain themselves was even made concerning John Sinclair and their plans to exclude him and anyone else they consider a threat to their iron rule from speaking to their children. Genie went on to try to speak to that question but the noise became so loud with people yelling and shouting at each other that the chairman of the board broke his gavel as Genie spoke louder and louder.

A lot of people said a lot of stuff that night. Mrs. Miller, the president of the White Advisory Council was obviously very upset with the whole thing and insisted on speaking a number of times, with the full support of the school board of course and Sheriff Harvey to counsel her in the hallway during the debates.

The students at Willow Run have a very long hard struggle ahead of them facing the kind of people that were at the meeting. Sheriff Harvey and Mrs. Miller and the culture they come from are dying and in their last moments in history they are vicious in their attempts to stay in control. The two token student members. John Lucas and Bob Ericson, of the board were heroic n their frustration at trying to negotiate with hardly any recognition or respect as human beings. The SUN was banned with threats directed at anyone who would try to distribute it and a new visitor policy was passed that involves weeks of red tape and teacher-parent-administration approval making it almost impossible for any real rapport with contemporary events and relevant speakers. Watch the SUN and talk to the students at Willow Run for possible further developments.