Washtenaw Co. Jail-clean It Up Or Close It Down! 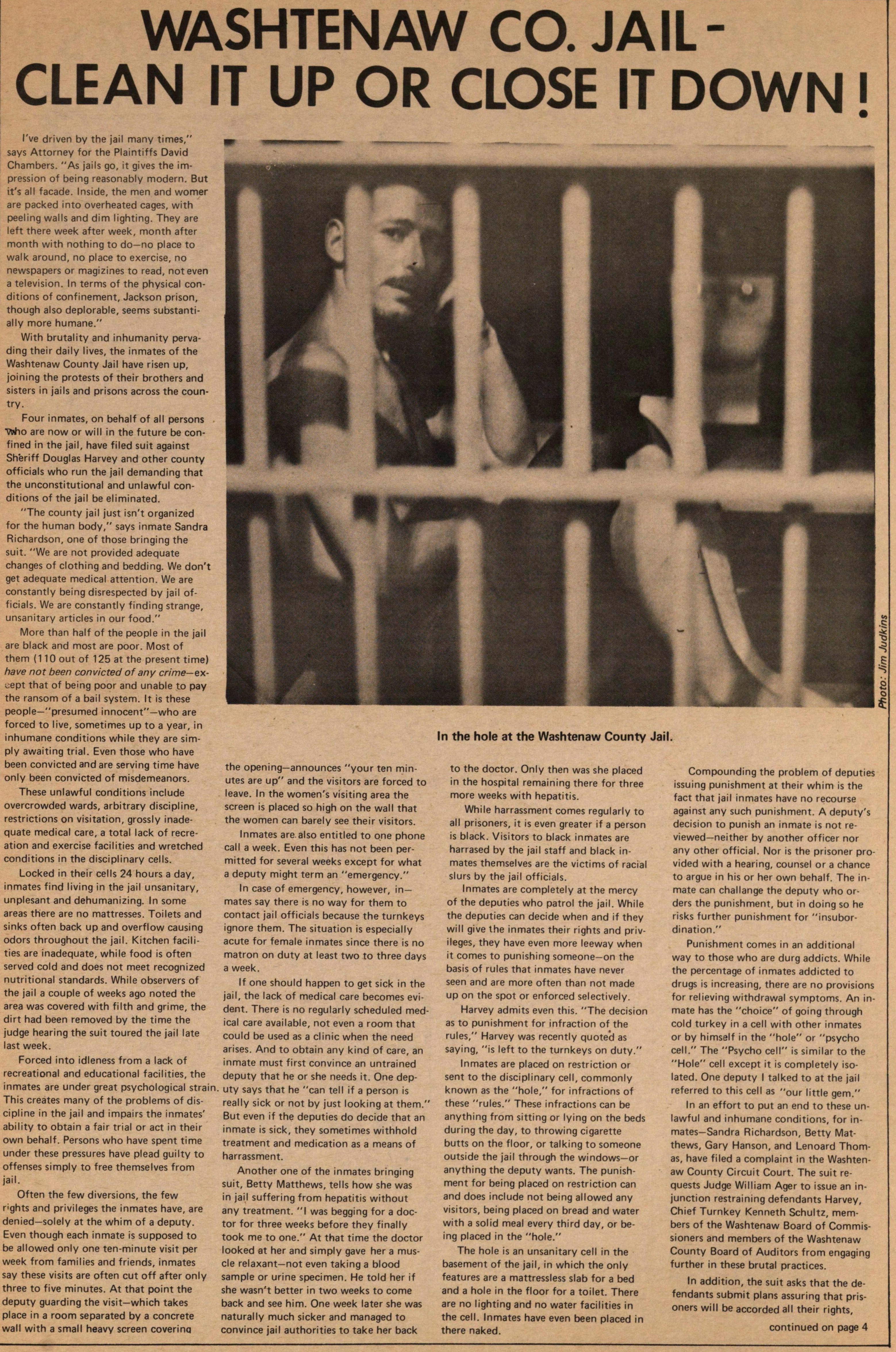 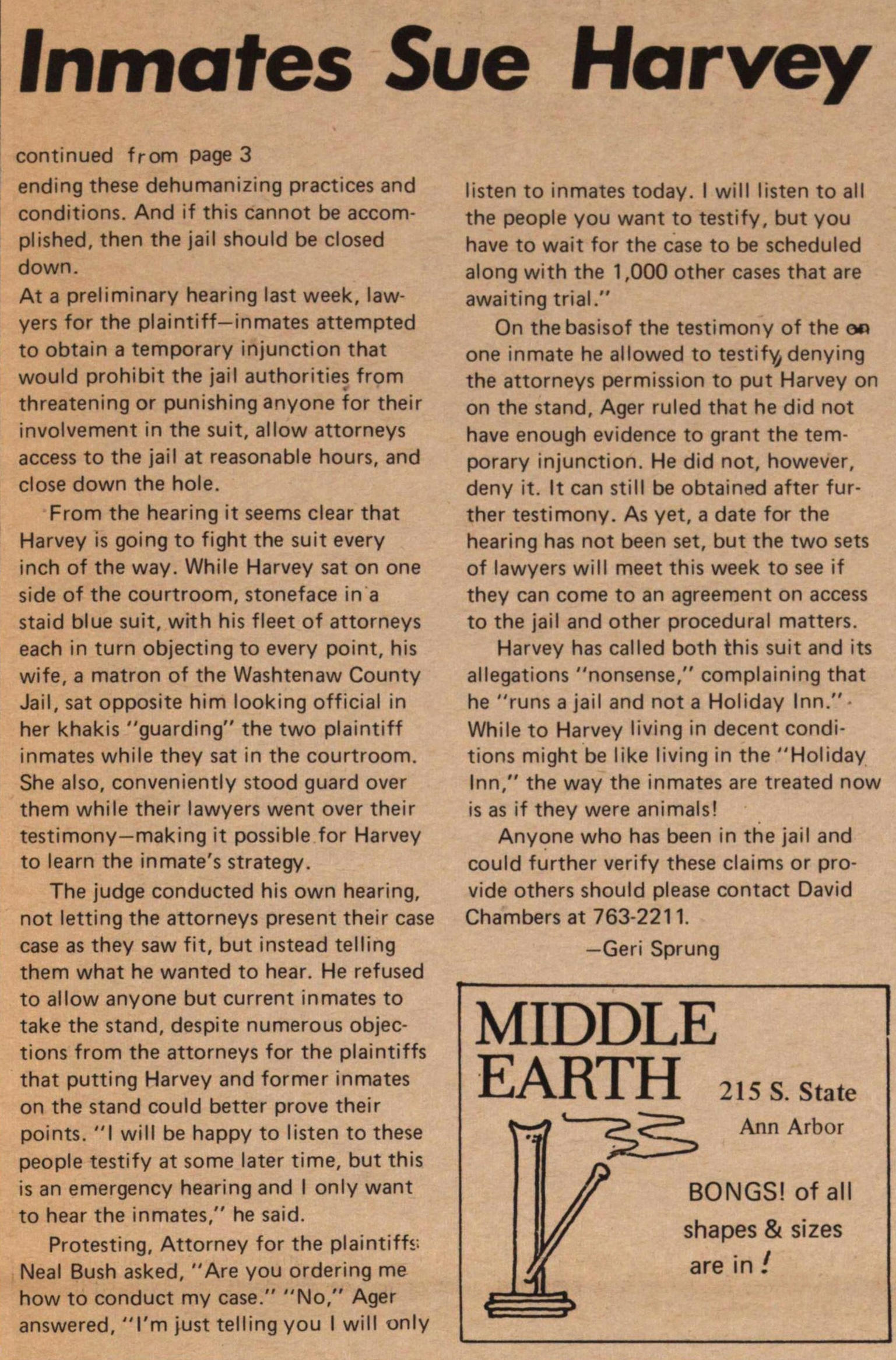 WASHTENAW CO. JAIL-CLEAN IT UP OR CLOSE IT DOWN!

"I've driven by the jail many times," says Attorney for the Plaintiffs David Chambers. "As jails go, it gives the impression of being reasonably modern. But it's all facade. Inside, the men and women are packed into overheated cages, with peeling walls and dim lighting. They are left there week after week, month after month with nothing to do- no place to walk around, no place to exercise, no newspapers or magazines to read, not even a television. In terms of the physical conditions of confinement, Jackson prison, though also deplorable, seems substantially more humane."

With brutality and inhumanity pervading their daily lives, the inmates of the Washtenaw County Jail have risen up, joining the protests of their brothers and sisters in jails and prisons across the country.

Four inmates, on behalf of all persons who are now or will in the future be confined in the jail, have filed suit against Sheriff Douglas Harvey and other county officials who run the jail demanding that the unconstitutional and unlawful conditions of the jail be eliminated.

"The county jail just isn't organized for the human body," says inmate Sandra Richardson, one of those bringing the suit. "We are not provided adequate changes of clothing and bedding. We don't get adequate medical attention. We are constantly being disrespected by jail officials. We are constantly finding strange, unsanitary articles in our food."

More than half of the people in the jail are black and most are poor. Most of them (110 out of 125 at the present time) have not been convicted of any crime- except that of being poor and unable to pay the ransom of a bail system. It is these people- "presumed innocent"- who are forced to live, sometimes up to a year, in inhumane conditions while they are simply awaiting trial. Even those who have been convicted and are serving time have only been convicted of misdemeanors.

These unlawful conditions include overcrowded wards, arbitrary discipline, restrictions on visitation, grossly inadequate medical care, a total lack of recreation and exercise facilities and wretched conditions in the disciplinary cells.

Locked in their cells 24 hours a day, inmates find living in the jail unsanitary, unpleasant and dehumanizing. In some areas there are no mattresses. Toilets and sinks often back up and overflow causing odors throughout the jail. Kitchen facilities are inadequate, while food is often served cold and does not meet recognized nutritional standards. While observers of the jail a couple of weeks ago noted the area was covered with filth and grime, the dirt had been removed by the time the judge hearing the suit toured the jail late last week.

Forced into idleness from a lack of recreational and educational facilities, the inmates are under great psychological strain. This creates many of the problems of discipline in the jail and impairs the inmates' ability to obtain a fair trial or act in their own behalf. Persons who have spent time under these pressures have plead guilty to offenses simply to free themselves from jail.

Often the few diversions, the few rights and privileges the inmates have, are denied- solely at the whim of a deputy. Even though each inmate is supposed to be allowed only one ten-minute visit per week from families and friends, inmates say these visits are often cut off after only three to five minutes. At that point the deputy guarding the visit-which takes place in a room separated by a concrete wall with a small heavy screen covering the opening-announces "your ten minutes are up" and the visitors are forced to leave. In the women's visiting area the screen is placed so high on the wall that the women can barely see their visitors.

Inmates are also entitled to one phone call a week. Even this has not been permitted for several weeks except for what a deputy might term an "emergency."

In case of emergency, however, inmates say there is no way for them to contact jail officials because the turnkeys ignore them. The situation is especially acute for female inmates since there is no matron on duty at least two to three days a week.

If one should happen to get sick in the jail, the lack of medical care becomes evident. There is no regularly scheduled medical care available, not even a room that could be used as a clinic when the need arises. And to obtain any kind of care, an inmate must first convince an untrained deputy that he or she needs it. One deputy says that he "can tell if a person is really sick or not by just looking at them." But even if the deputies do decide that an inmate is sick, they sometimes withhold treatment and medication as a means of harassment.

Another one of the inmates bringing suit, Betty Matthews, tells how she was in jail suffering from hepatitis without any treatment. "I was begging for a doctor for three weeks before they finally took me to one." At that time the doctor looked at her and simply gave her a muscle relaxant- not even taking a blood sample or urine specimen. He told her if she wasn't better in two weeks to come back and see him. One week later she was naturally much sicker and managed to convince jail authorities to take her back to the doctor. Only then was she placed in the hospital remaining there for three more weeks with hepatitis.

While harassment comes regularly to all prisoners, it is even greater if a person is black. Visitors to black inmates are harassed by the jail staff and black inmates themselves are the victims of racial slurs by the jail officials.

Inmates are completely at the mercy of the deputies who patrol the jail. While the deputies can decide when and if they will give the inmates their rights and privileges, they have even more leeway when it comes to punishing someone- on the basis of rules that inmates have never seen and are more often than not made up on the spot or enforced selectively.

Harvey admits even this. "The decision as to punishment for infraction of the rules," Harvey was recently quoted as saying, "is left to the turnkeys on duty."

Inmates are placed on restriction or sent to the disciplinary cell, commonly known as the "hole," for infractions of these "rules." These infractions can be anything from sitting or lying on the beds during the day, to throwing cigarette butts on the floor, or talking to someone outside the jail through the windows- or anything the deputy wants. The punishment for being placed on restriction can and does include not being allowed any visitors, being placed on bread and water with a solid meal every third day, or being placed in the "hole."

The hole is an unsanitary cell in the basement of the jail, in which the only features are a mattress-less slab for a bed and a hole in the floor for a toilet. There are no lighting and no water facilities in the cell. Inmates have even been placed in there naked.

Compounding the problem of deputies issuing punishment at their whim is the fact that jail inmates have no recourse against any such punishment. A deputy's decision to punish an inmate is not reviewed-neither by another officer nor any other official. Nor is the prisoner provided with a hearing, counsel or a chance to argue on his or her own behalf. The inmate can challenge the deputy who orders the punishment, but in doing so he risks further punishment for "insubordination."

Punishment comes in an additional way to those who are drug addicts. While the percentage of inmates addicted to drugs is increasing, there are no provisions for relieving withdrawal symptoms. An inmate has the "choice" of going through cold turkey in a cell with other inmates or by himself in the "hole" or "psycho cell." The "Psycho cell" is similar to the "Hole" cell except it is completely isolated. One deputy I talked to at the jail referred to this cell as "our little gem."

In addition, the suit asks that the defendants submit plans assuring that prisoners will be accorded all their rights, ending these dehumanizing practices and conditions. And if this cannot be accomplished, then the jail should be closed down.

At a preliminary hearing last week, lawyers for the plaintiff- inmates attempted to obtain a temporary injunction that would prohibit the jail authorities from threatening or punishing anyone for their involvement in the suit, allow attorneys access to the jail at reasonable hours, and close down the hole.

From the hearing it seems clear that Harvey is going to fight the suit every inch of the way. While Harvey sat on one side of the courtroom, stone faced in a staid blue suit, with his fleet of attorneys each in turn objecting to every point, his wife, a matron of the Washtenaw County Jail, sat opposite him looking official in her khakis "guarding" the two plaintiff inmates while they sat n the courtroom. She also, conveniently stood guard over them while their lawyers went over their testimony- making it possible for Harvey to learn the inmate's strategy.

The judge conducted his own hearing, not letting the attorneys present their case as they saw fit, but instead telling them what he wanted to hear. He refused to allow anyone but current inmates to take the stand, despite numerous objections from the attorneys for the plaintiffs that putting Harvey and former inmates on the stand could better prove their points. "I will be happy to listen to these people testify at some later time, but this is an emergency hearing and I only want to hear the inmates," he said.

Protesting, Attorney for the plaintiffs, Neal Bush asked, "Are you ordering me how to conduct my case." "No," Ager answered, "l'm just telling you I will only listen to inmates today. I will listen to all the people you want to testify, but you have to wait for the case to be scheduled along with the 1,000 other cases that are awaiting trial."

On the basis of the testimony of the one inmate he allowed to testify, denying the attorneys permission to put Harvey on on the stand, Ager ruled that he did not have enough evidence to grant the temporary injunction. He did not, however, deny it. It can still be obtained after further testimony. As yet, a date for the hearing has not been set, but the two sets of lawyers will meet this week to see if they can come to an agreement on access to the jail and other procedural matters.

Harvey has called both this suit and its allegations "nonsense," complaining that he "runs a jail and not a Holiday Inn." While to Harvey living in decent conditions might be like living in the "Holiday Inn," the way the inmates are treated now is as if they were animals!

Anyone who has been in the jail and could further verify these claims or provide others should please contact David Chambers at 763-2211.