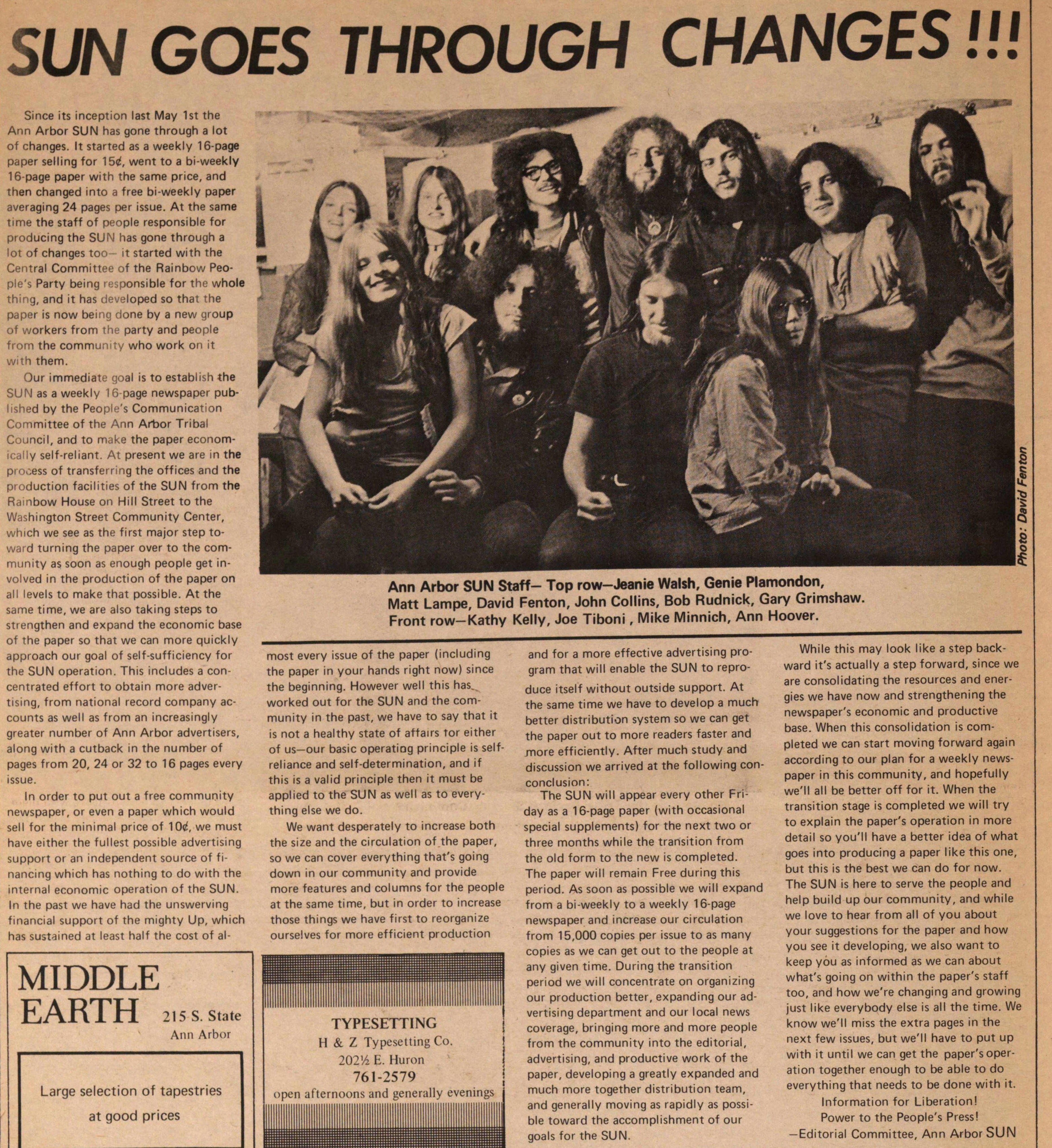 Since its inception last May 1st the Ann Arbor SUN has gone through a lot of changes. It started as a weekly 16-page paper selling for 15 cents, went to a bi-weekly 16-page paper with the same price, and then changed into a free bi-weekly paper averaging 24 pages per issue. At the same time the staff of people responsible for producing the SUN has gone through a lot of changes too-- it started with the Central Committee of the Rainbow People's Party being responsible for the whole thing, and it has developed so that the paper is now being done by a new group of workers from the party and people from the community who work on it with them.

Our immediate goal is to establish the SUN as a weekly 16 page newspaper published by the People's Communication Committee of the Ann Arbor Tribal Council, and to make the paper economically self-reliant. At present we are in the process of transferring the offices and the production facilities of the SUN from the Rainbow House on Hill Street to the Washington Street Community Center, which we see as the first major step toward turning the paper over to the community as soon as enough people get involved in the production of the paper on all levels to make that possible. At the same time, we are also taking steps to strengthen and expand the economic base of the paper so that we can more quickly approach our goal of self-sufficiency for the SUN operation. This includes a concentrated effort to obtain more advertising, from national record company accounts as well as from an increasingly greater number of Ann Arbor advertisers, along with a cutback in the number of pages from 20, 24 or 32 to 16 pages every issue.

In order to put out a free community newspaper, or even a paper which would sell for the minimal price of 10 cents, we must have either the fullest possible advertising support or an independent source of financing which has nothing to do with the internal economic operation of the SUN. In the past we have had the unswerving financial support of the mighty Up, which has sustained at least half the cost of almost every issue of the paper (including the paper in your hands right now) since the beginning. However well this has worked out for the SUN and the community in the past, we have to say that it is not a healthy state of affairs tor either of us- our basic operating principle is self-reliance and self-determination, and if this is a valid principle then it must be applied to the SUN as well as to everything else we do.

We want desperately to increase both the size and the circulation of the paper, so we can cover everything that's going down in our community and provide more features and columns for the people at the same time, but in order to increase those things we have first to reorganize ourselves for more efficient production and for a more effective advertising program that will enable the SUN to reproduce itself without outside support. At the same time we have to develop a much better distribution system so we can get the paper out to more readers faster and more efficiently. After much study and discussion we arrived at the following conclusion:

The SUN will appear every other Friday as a 16-page paper (with occasional special supplements) for the next two or three months while the transition from the old form to the new is completed. The paper will remain Free during this period. As soon as possible we will expand from a bi-weekly to a weekly 16-page newspaper and increase our circulation from 15,000 copies per issue to as many copies as we can get out to the people at any given time. During the transition period we will concentrate on organizing our production better, expanding our advertising department and our local news coverage, bringing more and more people from the community into the editorial, advertising, and productive work of the paper, developing a greatly expanded and much more together distribution team, and generally moving as rapidly as possible toward the accomplishment of our goals for the SUN.

While this may look like a step backward it's actually a step forward, since we are consolidating the resources and energies we have now and strengthening the newspaper's economic and productive base. When this consolidation is completed we can start moving forward again according to our plan for a weekly newspaper in this community, and hopefully we'll all be better off for it. When the transition stage is completed we will try to explain the paper's operation in more detail so you'll have a better idea of what goes into producing a paper like this one, but this is the best we can do for now. The SUN is here to serve the people and help build up our community, and while we love to hear from all of you about your suggestions for the paper and how you see it developing, we also want to keep you as informed as we can about what's going on within the paper's staff too, and how we're changing and growing just like everybody else is all the time. We know we'll miss the extra pages in the next few issues, but we'll have to put up with it until we can get the paper's operation together enough to be able to do everything that needs to be done with it.

Power to the People's Press!