Statement Of The Rainbow People's Party 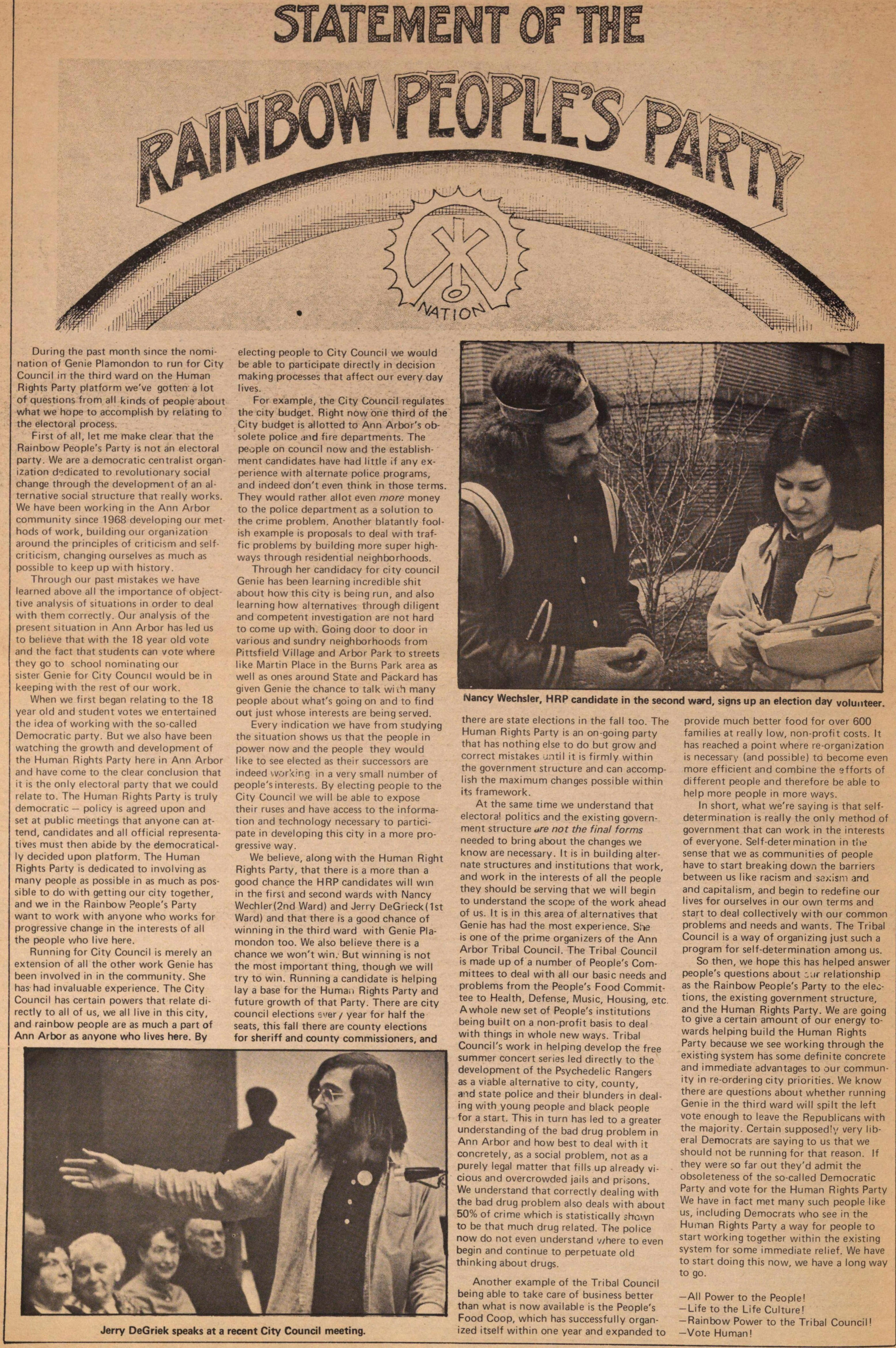 STATEMENT OF THE RAINBOW PEOPLES PARTY

During the past month since the nomination of Genie Plamondon to run for City Council in the third ward on the Human Rights Party platform we've gotten a lot of questions from all kinds of people about what we hope to accomplish by relating to the electoral process.

First of all, let me make clear that the Rainbow People's Party is not an electoral party. We are a democratic centralist organization dedicated to revolutionary social change through the development of an alternative social structure that really works. We have been working in the Ann Arbor community since 1968 developing our methods of work, building our organization around the principles of criticism and self-criticism, changing ourselves as much as possible to keep up with history.

Through our past mistakes we have learned above all the importance of objective analysis of situations in order to deal with them correctly. Our analysis of the present situation in Ann Arbor has led us to believe that with the 18 year old vote and the fact that students can vote where they go to school nominating our sister Genie for City Council would be in keeping with the rest of our work.

When we first began relating to the 18 year old and student votes we entertained the idea of working with the so-called Democratic party. But we also have been watching the growth and development of the Human Rights Party here in Ann Arbor and have come to the clear conclusion that it is the only electoral party that we could relate to. The Human Rights Party is truly democratic - policy is agreed upon and set at public meetings that anyone can attend, candidates and all official representatives must then abide by the democratically decided upon platform. The Human Rights Party is dedicated to involving as many people as possible in as much as possible to do with getting our city together, and we in the Rainbow People's Party want to work with anyone who works for progressive change in the interests of all the people who live here.

Running for City Council is merely an extension of all the other work Genie has been involved in in the community. She has had invaluable experience. The City Council has certain powers that relate directly to all of us, we all live in this city, and rainbow people are as much a part of Ann Arbor as anyone who lives here. By electing people to City Council we would be able to participate directly in decision making processes that affect our every day lives.

For example, the City Council regulates the city budget. Right now one third of the City budget is allotted to Ann Arbor's obsolete police and fire departments. The people on council now and the establishment candidates have had little f any experience with alternate police programs, and indeed don't even think in those terms. They would rather allot even more money to the police department as a solution to the crime problem. Another blatantly foolish example is proposals to deal with traffic problems by building more super highways through residential neighborhoods.

Through her candidacy for city council Genie has been learning incredible shit about how this city is being run, and also learning how alternatives through diligent and competent investigation are not hard to come up with. Going door to door in various and sundry neighborhoods from Pittsfield Village and Arbor Park to streets like Martin Place in the Burns Park area as well as ones around State and Packard has given Genie the chance to talk with many people about what's going on and to find out just whose interests are being served.

Every indication we have from studying the situation shows us that the people in power now and the people they would like to see elected as their successors are indeed working in a very small number of people's interests. By electing people to the City Council we will be able to expose their ruses and have access to the information and technology necessary to participate in developing this city in a more progressive way.

We believe, along with the Human Right Rights Party, that there is a more than a good chance the HRP candidates will win in the first and second wards with Nancy Wechler(2nd Ward) and Jerry DeGrieck(1st Ward) and that there is a good chance of winning in the third ward with Genie Plamondon too. We also believe there is a chance we won't win. But winning is not the most important thing, though we will try to win. Running a candidate is helping lay a base for the Human Rights Party and future growth of that Party. There are city council elections every year for half the seats, this fall there are county elections for sheriff and county commissioners, and there are state elections in the fall too. The Human Rights Party is an on-going party that has nothing else to do but grow and correct mistakes until is firmly within the government structure and can accomplish the maximum changes possible within its framework.

At the same time we understand that electoral politics and the existing government structure are not the final forms needed to bring about the changes we know are necessary. It is in building alternate structures and institutions that work, and work in the interests of all the people they should be serving that we will begin to understand the scope of the work ahead of us. It is in this area of alternatives that Genie has had the most experience. Site is one of the prime organizers of the Ann Arbor Tribal Council. The Tribal Council is made up of a number of People's Committees to deal with all our basic needs and problems from the People's Food Committee to Health, Defense, Music, Housing, etc A whole new set of People's institutions being built on a non-profit basis to deal with things in whole new ways. Tribal Council's work in helping develop the free summer concert series led directly to the development of the Psychedelic Rangers as a viable alternative to city, county, and state police and their blunders in dealing with young people and black people for a start. This in turn has led to a greater understanding of the bad drug problem in Ann Arbor and how best to deal with it concretely, as a social problem, not as a purely legal matter that fills up already vicious and overcrowded jails and prisons. We understand that correctly dealing with the bad drug problem also deals with about 50% of crime which is statistically shown to be that much drug related. The police now do not even understand where to even begin and continue to perpetuate old thinking about drugs.

Another example of the Tribal Council being able to take care of business better than what is now available is the People's Food Coop, which has successfully organized itself within one year and expanded to provide much better food for over 600 families at really low, non-profit costs. It has reached a point where re-organization is necessary (and possible) to become even more efficient and combine the efforts of different people and therefore be able to help more people in more ways. In short, what we're saying is that self-determination is really the only method of government that can work in the interests of everyone. Self-determination in the sense that we as communities of people have to start breaking down the barriers between us like racism and sexism and and capitalism, and begin to redefine our lives for ourselves in our own terms and start to deal collectively with our common problems and needs and wants. The Tribal Council is a way of organizing just such a program for self-determination among us.

So then, we hope this has helped answer people's questions about our relationship as the Rainbow People's Party to the elections, the existing government structure, and the Human Rights Party. We are going to give a certain amount of our energy towards helping build the Human Rights Party because we see working through the existing system has some definite concrete and immediate advantages to our community in re-ordering city priorities. We know there are questions about whether running Genie in the third ward will spilt the left vote enough to leave the Republicans with the majority. Certain supposedly very liberal Democrats are saying to us that we should not be running for that reason. If they were so far out they'd admit the obsoleteness of the so-called Democratic Party and vote for the Human Rights Party We have in fact met many such people like us, including Democrats who see in the Human Rights Party a way for people to start working together within the existing system for some immediate relief. We have to start doing this now, we have a long way to go.

-All Power to the People!

-Life to the Life Culture!

-Rainbow Power to the Tribal Council!