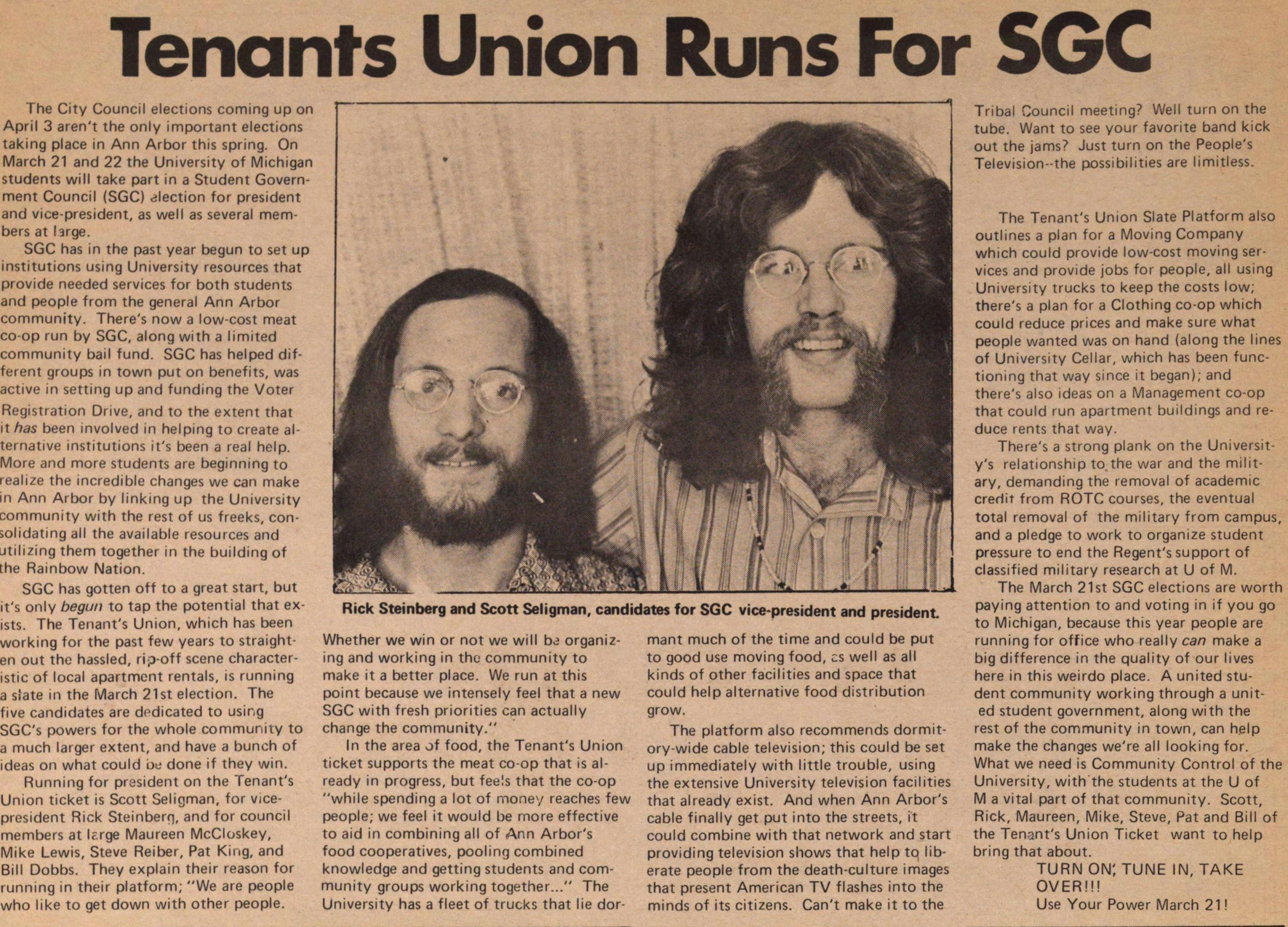 The City Council elections coming up on April 3 aren't the only important elections taking place in Ann Arbor this spring. On March 21 and 22 the University of Michigan students will take part in a Student Government Council (SGC) election for president and vice-president, as well as several members at large.

SGC has in the past year begun to set up institutions using University resources that provide needed services for both students and people from the general Ann Arbor community. There's now a low-cost meat co-op run by SGC, along with a limited community bail fund. SGC has helped different groups in town put on benefits, was active in setting up and funding the Voter Registration Drive, and to the extent that it has been involved in helping to create alternative institutions it's been a real help. More and more students are beginning to realize the incredible changes we can make in Ann Arbor by linking up the University community with the rest of us freeks, consolidating all the available resources and utilizing them together in the building of the Rainbow Nation.

SGC has gotten off to a great start, but it's only begun to tap the potential that exists. The Tenant's Union, which has been working for the past few years to straighten out the hassled, rip-off scene characteristic of local apartment rentals, is running a slate in the March 21st election. The five candidates are dedicated to using SGC's powers for the whole community to a much larger extent, and have a bunch of ideas on what could be done if they win.

Running for president on the Tenant's Union ticket is Scott Seligman, for vice-president Rick Steinberq, and for council members at large Maureen McCloskey, Mike Lewis, Steve Reiber, Pat King, and Bill Dobbs. They explain their reason for running in their platform; "We are people who like to get down with other people. Whether we win or not we will be organizing and working in the community to make it a better place. We run at this point because we intensely feel that a new SGC with fresh priorities can actually change the community."

In the area of food, the Tenant's Union ticket supports the meat co-op that is already in progress, but feels that the co-op "while spending a lot of money reaches few people; we feel it would be more effective to aid in combining all of Ann Arbor's food cooperatives, pooling combined knowledge and getting students and community groups working together ..." The University has a fleet of trucks that lie dormant much of the time and could be put to good use moving food, as well as all kinds of other facilities and space that could help alternative food distribution grow.

The platform also recommends dormitory-wide cable television; this could be set up immediately with little trouble, using the extensive University television facilities that already exist. And when Ann Arbor's cable finally get put into the streets, it could combine with that network and start providing television shows that help to liberate people from the death-culture images that present American TV flashes into the minds of its citizens. Can't make it to the Tribal Council meeting? Well turn on the tube. Want to see your favorite band kick out the jams? Just turn on the People's Television -- the possibilities are limitless.

The Tenant's Union Slate Platform also outlines a plan for a Moving Company which could provide low-cost moving services and provide jobs for people, all using University trucks to keep the costs low; there's a plan for a Clothing co-op which could reduce prices and make sure what people wanted was on hand (along the lines of University Cellar, which has been functioning that way since it began); and there's also ideas on a Management co-op that could run apartment buildings and reduce rents that way.

There's a strong plank on the University's relationship to the war and the military, demanding the removal of academic credit from ROTC courses, the eventual total removal of the military from campus, and a pledge to work to organize student pressure to end the Regent's support of classified military research at U of M.

The March 21st SGC elections are worth paying attention to and voting in if you go to Michigan, because this year people are running for office who really can make a big difference in the quality of our lives here in this weirdo place. A united student community working through a united student government, along with the rest of the community in town, can help make the changes we're all looking for. What we need is Community Control of the University, with the students at the U of M a vital part of that community. Scott, Rick, Maureen, Mike, Steve, Pat and Bill of the Tenant's Union Ticket want to help bring that about.

Use Your Power March 21!