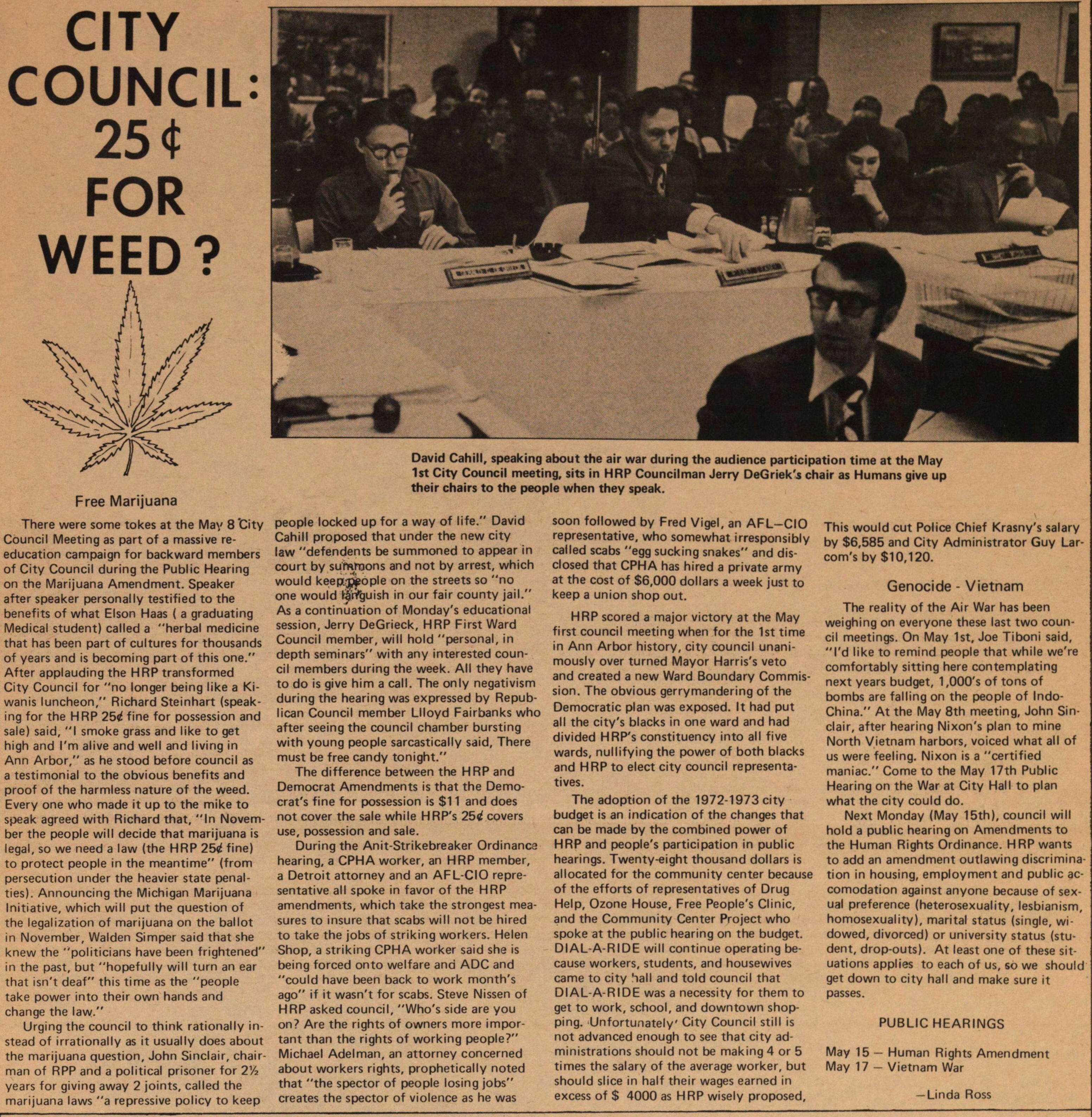 There were some tokes at the May 8 City Council Meeting as part of a massive reeducation campaign for backward members of City Council during the Public Hearing on the Marijuana Amendment. Speaker after speaker personally testified to the benefits of what Elson Haas ( a graduating Medical student) called a "herbal medicine that has been part of cultures for thousands of years and is becoming part of this one." After applauding the HRP transformed City Council for "no longer being like a Kiwanis luncheon," Richard Steinhart (speaking for the HRP 25 cent fine for possession and sale) said, "I smoke grass and like to get high and I'm alive and well and living in Ann Arbor," as he stood before council as a testimonial to the obvious benefits and proof of the harmless nature of the weed. Every one who made it up to the mike to speak agreed with Richard that, "In November the people will decide that marijuana is legal, so we need a law (the HRP 25 cent fine) to protect people in the meantime" (from persecution under the heavier state penalties). Announcing the Michigan Marijuana Initiative, which will put the question of the legalization of marijuana on the ballot in November, Walden Simper said that she knew the "politicians have been frightened" in the past, but "hopefully will turn an ear that isn't deaf" this time as the "people take power into their own hands and change the law."

Urging the council to think rationally instead of irrationally as it usually does about the marijuana question, John Sinclair, chairman of RPP and a political prisoner for 2 1/2 years for giving away 2 joints, called the marijuana laws "a repressive policy to keep people locked up for a way of life." David Cahill proposed that under the new city law "defendants be summoned to appear in court by summons and not by arrest, which would keep people on the streets so "no one would languish in our fair county jail." As a continuation of Monday's educational session, Jerry DeGrieck, HRP First Ward Council member, will hold "personal, in depth seminars" with any interested council members during the week. All they have to do is give him a call. The only negativism during the hearing was expressed by Republican Council member Lloyd Fairbanks who after seeing the council chamber bursting with young people sarcastically said, There must be free candy tonight."

The difference between the HRP and Democrat Amendments is that the Democrat's fine for possession is $11 and does not cover the sale while HRP's 25 cent covers use, possession and sale.

During the Anti-Strikebreaker Ordinance hearing, a CPHA worker, an HRP member, a Detroit attorney and an AFL-CIO representative all spoke in favor of the HRP amendments, which take the strongest measures to insure that scabs will not be hired to take the jobs of striking workers. Helen Shop, a striking CPHA worker said she is being forced onto welfare and ADC and "could have been back to work months ago" if it wasn't for scabs. Steve Nissen of HRP asked council, "Who's side are you on? Are the rights of owners more important than the rights of working people?" Michael Adelman, an attorney concerned about workers rights, prophetically noted that "the specter of people losing jobs" creates the specter of violence as he was soon followed by Fred Vigel, an AFL-CIO representative, who somewhat irresponsibly called scabs "egg sucking snakes" and disclosed that CPHA has hired a private army at the cost of $6,000 dollars a week just to keep a union shop out.

HRP scored a major victory at the May first council meeting when for the 1st time in Ann Arbor history, city council unanimously over turned Mayor Harris's veto and created a new Ward Boundary Commission. The obvious gerrymandering of the Democratic plan was exposed. It had put all the city's blacks in one ward and had divided HRP's constituency into all five wards, nullifying the power of both blacks and HRP to elect city council representatives.

The adoption of the 1972-1973 city budget is an indication of the changes that can be made by the combined power of HRP and people's participation in public hearings. Twenty-eight thousand dollars is allocated for the community center because of the efforts of representatives of Drug Help, Ozone House, Free People's Clinic, and the Community Center Project who spoke at the public hearing on the budget. DIAL-A-RIDE will continue operating because workers, students, and housewives came to city hall and told council that DIAL-A-RIDE was a necessity for them to get to work, school, and downtown shopping. Unfortunately City Council still is not advanced enough to see that city administrations should not be making 4 or 5 times the salary of the average worker, but should slice in half their wages earned in excess of $4000 as HRP wisely proposed. This would cut Police Chief Krasny's salary by $6,585 and City Administrator Guy Larcom's by $10,120.

The reality of the Air War has been weighing on everyone these last two council meetings. On May 1st, Joe Tiboni said, "I'd like to remind people that while we're comfortably sitting here contemplating next years budget, 1,000's of tons of bombs are falling on the people of IndoChina." At the May 8th meeting, John Sinclair, after hearing Nixon's plan to mine North Vietnam harbors, voiced what all of us were feeling. Nixon is a "certified maniac." Come to the May 17th Public Hearing on the War at City Hall to plan what the city could do.

Next Monday (May 15th), council will hold a public hearing on Amendments to the Human Rights Ordinance. HRP wants to add an amendment outlawing discrimination in housing, employment and public accommodation against anyone because of sexual preference (heterosexuality, lesbianism, homosexuality), marital status (single, widowed, divorced) or university status (student, drop-outs). At least one of these situations applies to each of us, so we should get down to city hall and make sure it passes.

David Cahill, speaking about the air war during the audience participation time at the May 1st City Council meeting, sits in HRP Councilman Jerry DeGriek's chair as Humans give up their chairs to the people when they speak.