Humans Run For School Board! 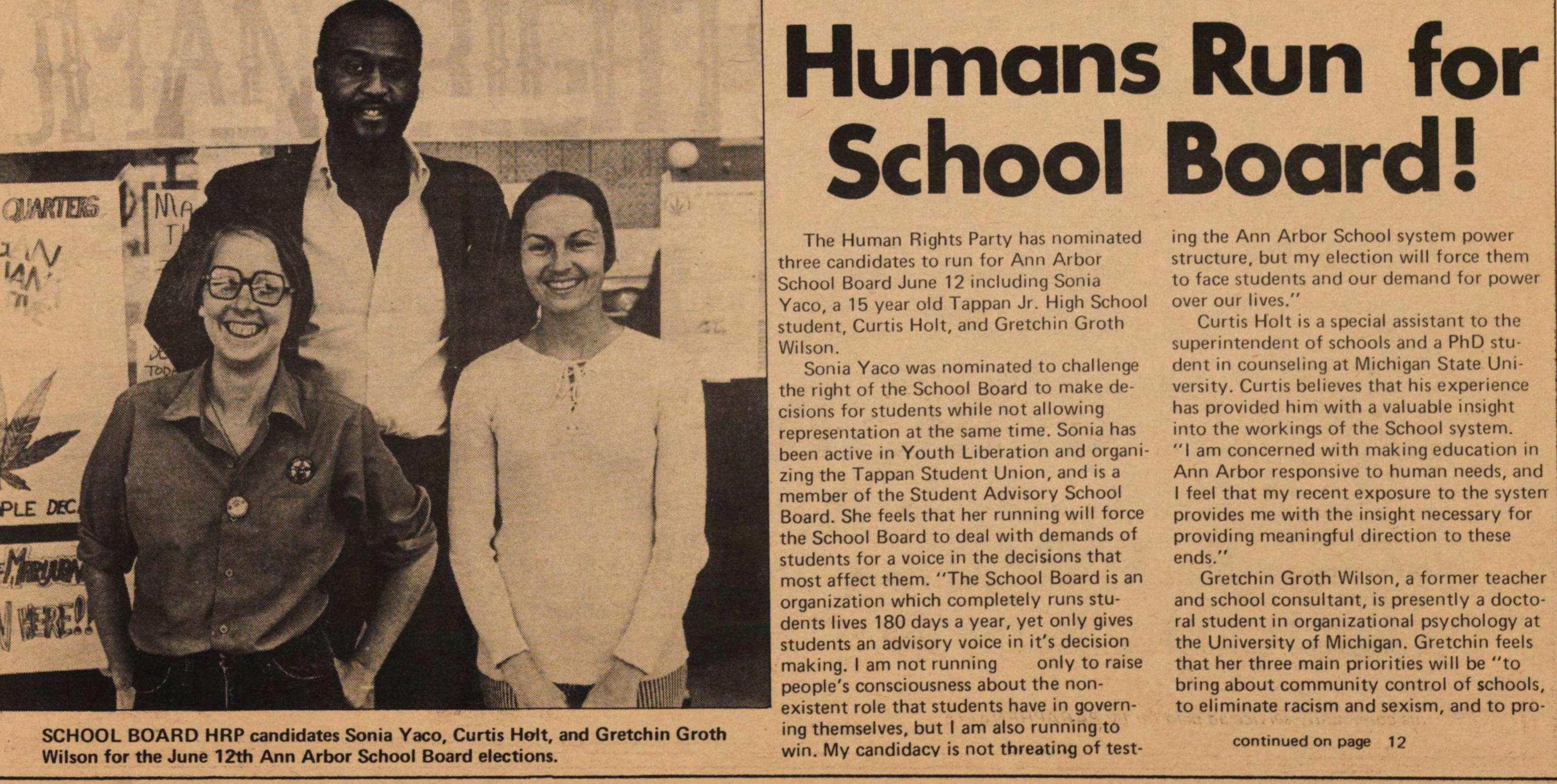 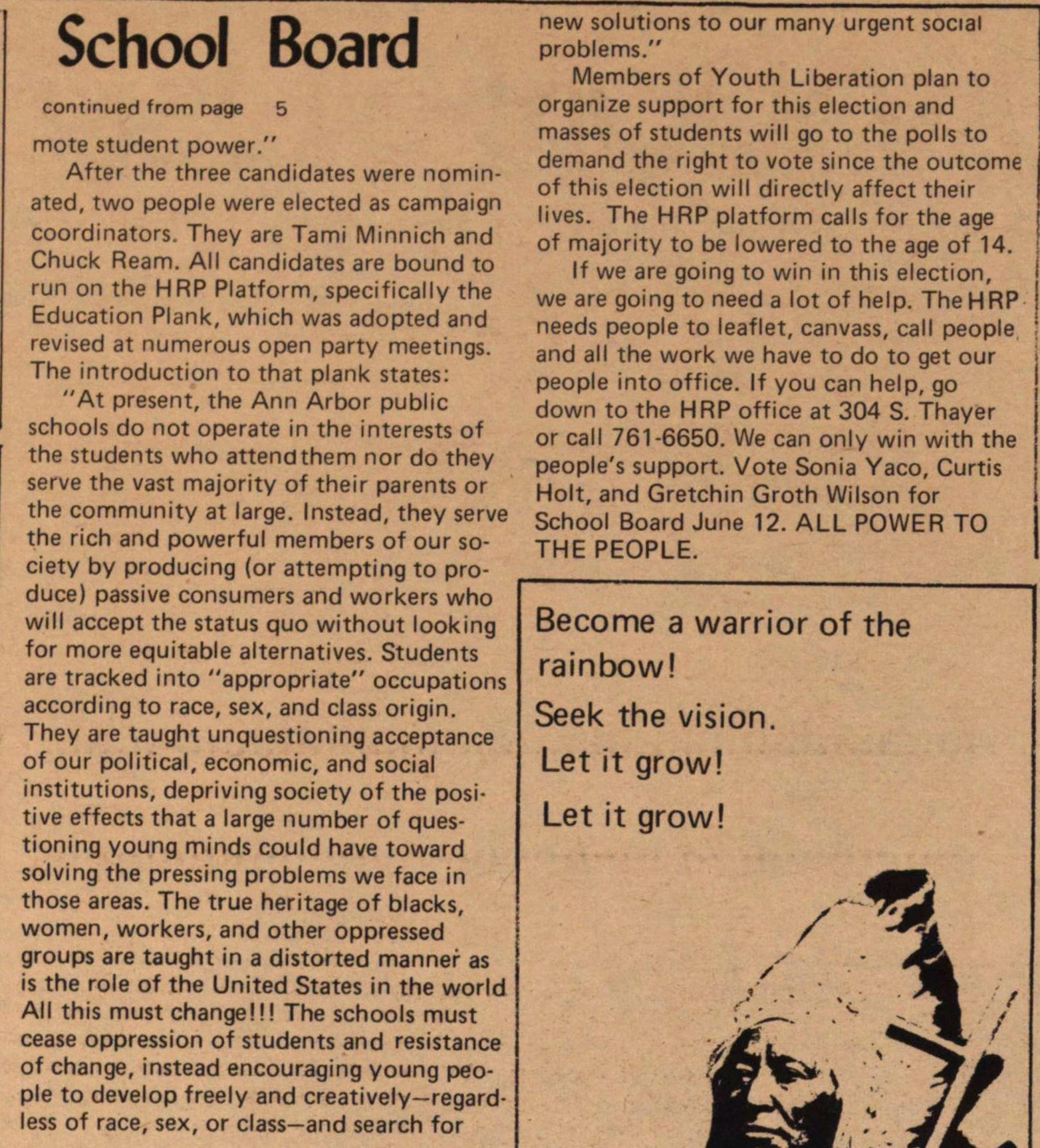 Humans Run for School Board!

Sonia Yaco was nominated to challenge the right of the School Board to make decisions for students while not allowing representation at the same time. Sonia has been active in Youth Liberation and organizing the Tappan Student Union, and is a member of the Student Advisory School Board. She feels that her running will force the School Board to deal with demands of students for a voice n the decisions that most affect them. "The School Board is an organization which completely runs students lives 180 days a year, yet only gives students an advisory voice in it's decision making. I am not running only to raise people's consciousness about the nonexistent role that students have in governing themselves, but I am also running to win. My candidacy is not threatening of testing the Ann Arbor School system power structure, but my election will force them to face students and our demand for power over our lives."

Curtis Holt is a special assistant to the superintendent of schools and a PhD student in counseling at Michigan State University. Curtis believes that his experience has provided him with a valuable insight into the workings of the School system. "I am concerned with making education in Ann Arbor responsive to human needs, and I feel that my recent exposure to the systerm provides me with the insight necessary for providing meaningful direction to these ends."

Gretchin Groth Wilson, a former teacher and school consultant, is presently a doctoral student in organizational psychology at the University of Michigan. Gretchin feels that her three main priorities will be "to bring about community control of schools, to eliminate racism and sexism, and to pro- (continued on page 1 2 School Board continued from page 5) ote student power."

After the three candidates were nominated, two people were elected as campaign coordinators. They are Tami Minnich and Chuck Ream. All candidates are bound to run on the HRP Platform, specifically the Education Plank, which was adopted and revised at numerous open party meetings. The introduction to that plank states:

"At present, the Ann Arbor public schools do not operate in the interests of the students who attend them nor do they serve the vast majority of their parents or the community at large. Instead, they serve the rich and powerful members of our society by producing (or attempting to produce) passive consumers and workers who will accept the status quo without looking for more equitable alternatives. Students are tracked into "appropriate" occupations according to race, sex, and class origin. They are taught unquestioning acceptance of our political, economic, and social institutions, depriving society of the positive effects that a large number of questioning young minds could have toward solving the pressing problems we face in those areas. The true heritage of blacks, women, workers, and other oppressed groups are taught in a distorted manner as is the role of the United States in the world. All this must change!!! The schools must cease oppression of students and resistance of change, instead encouraging young people to develop freely and creatively-regardless of race, sex, or class- and search for new solutions to our many urgent social problems."

Members of Youth Liberation plan to organize support for this election and masses of students will go to the polls to demand the right to vote since the outcome of this election will directly affect their lives. The HRP platform calls for the age of majority to be lowered to the age of 14.

If we are going to win in this election, we are going to need a lot of help. The HRP needs people to leaflet, canvass, call people and all the work we have to do to get our people into office. If you can help, go down to the HRP office at 304 S. Thayer or call 761-6650. We can only win with the people's support. Vote Sonia Yaco, Curtís Holt, and Gretchin Groth Wilson for School Board June 12. ALL POWER TO THE PEOPLE.

Become a warrior of the rainbow!