Watch Out For Up 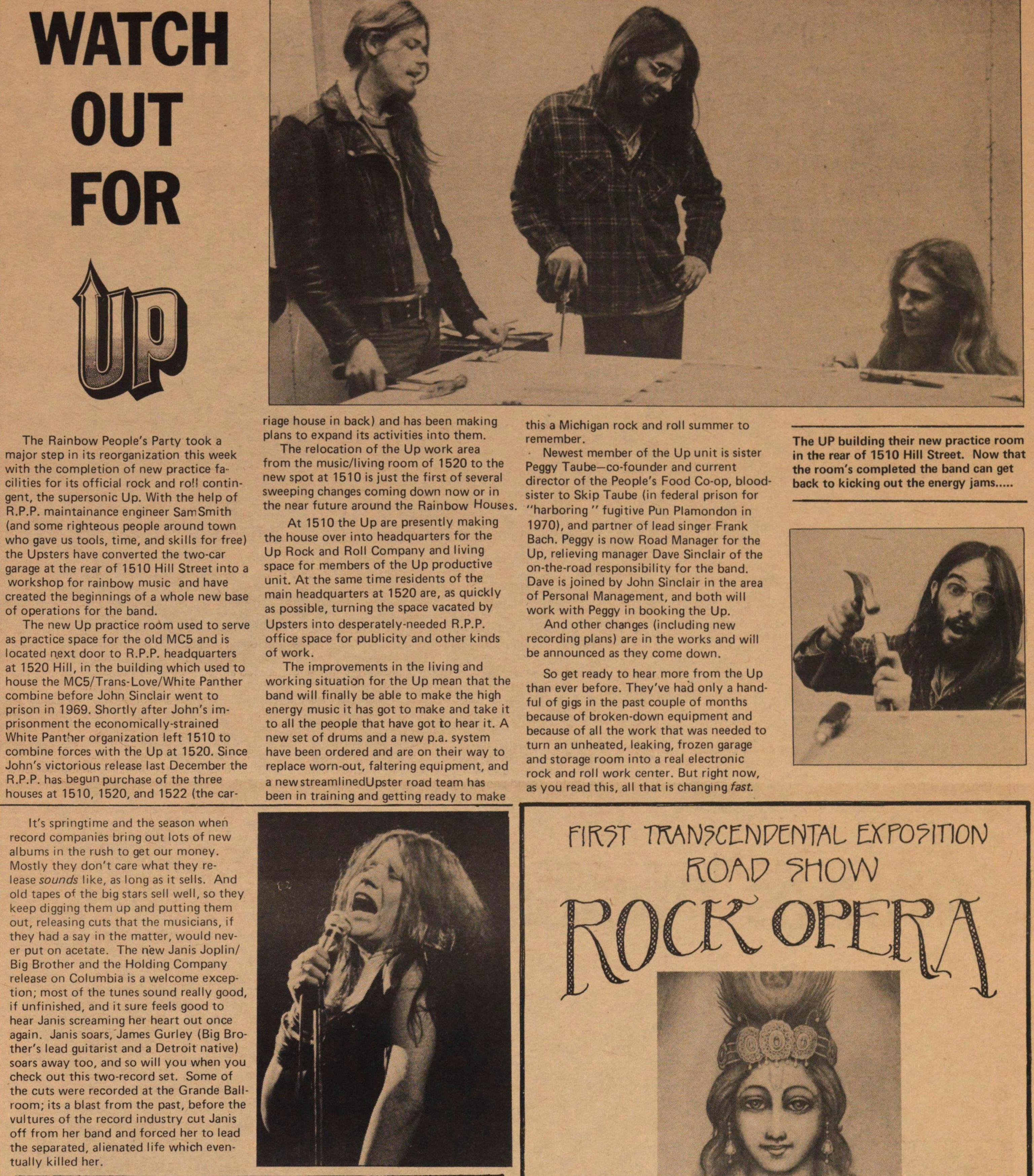 WATCH OUT FOR UP

The Rainbow People's Party took a major step in its reorganizaron this week with the completion of new practice facilities for its official rock and roll contingent, the supersonic Up. With the help of R.P.P. maintainence engineer Sam Smith (and some righteous people around town who gave us tools, time, and skills for free) the Upsters have converted the two-car garage at the rear of 1510 Hill Street into a workshop for rainbow music and have created the beginnings of a whole new base of operations for the band.

The new Up practice room used to serve as practice space for the old MC5 and is located next door to R.P.P. headquarters at 1520 Hill, in the building which used to house the MC5/Trans-Love/White Panther combine before John Sinclair went to prison in 1969. Shortly after John's imprisonment the economically-strained White Panther organization left 1510 to combine forces with the Up at 1520. Since John's victorious release last December the R.P.P. has begun purchase of the three houses at 1510, 1520, and 1522 (the carriage house in back) and has been making plans to expand its activities into them.

The relocation of the Up work area from the music/living room of 1520 to the new spot at 1510 is just the first of several sweeping changes coming down now or in the near future around the Rainbow Houses.

At 1510 the Up are presently making the house over into headquarters for the Up Rock and Roll Company and living space for members of the Up productive unit. At the same time residents of the main headquarters at 1520 are, as quickly as possible, turning the space vacated by Upsters into desperately-needed R.P.P. office space for publicity and other kinds of work.

The improvements in the living and working situation for the Up mean that the band will finally be able to make the high energy music it has got to make and take it to all the people that have got to hear t. A new set of drums and a new p.a. system have been ordered and are on their way to replace worn-out, faltering equipment, and a new streamlined Upster road team has been in training and getting ready to make this a Michigan rock and roll summer to remember.

Newest member of the Up unit is sister Peggy Taube- co-founder and current director of the People's Food Co-op, bloodsister to Skip Taube (in federal prison for "harboring " fugitive Pun Plamondon in 1970), and partner of lead singer Frank Bach. Peggy is now Road Manager for the Up, relieving manager Dave Sinclair of the on-the-road responsibility for the band. Dave is joined by John Sinclair in the area of Personal Management, and both will work with Peggy in booking the Up.

And other changes (including new recording plans) are in the works and will be announced as they come down.

The UP building their new practice room in the rear of 1510 Hill Street. Now that the room's completed the band can get back to kicking out the energy jams.....

So get ready to hear more from the Up than ever before. They've had only a handful of gigs in the past couple of months because of broken-down equipment and because of all the work that was needed to turn an unheated, leaking, frozen garage and storage room into a real electronic rock and roll work center. But right now, as you read this, all that is changing fast.

It's springtime and the season when record companies bring out lots of new albums n the rush to get our money. Mostly they don't care what they release sounds like, as long as it sells. And old tapes of the big stars sell well, so they keep digging them up and putting them out, releasing cuts that the musicians, if they had a say in the matter, would never put on acetate. The new Janis Joplin/Big Brother and the Holding Company release on Columbia is a welcome exception; most of the tunes sound really good, if unfinished, and it sure feels good to hear Janis screaming her heart out once again. Janis soars, James Gurley (Big Brother's lead guitarist and a Detroit native) soars away too, and so will you when you check out this two-record set. Some of the cuts were recorded at the Grande Ballroom; its a blast from the past, before the vultures of the record industry cut Janis off from her band and forced her to lead the separated, alienated life which eventually killed her.