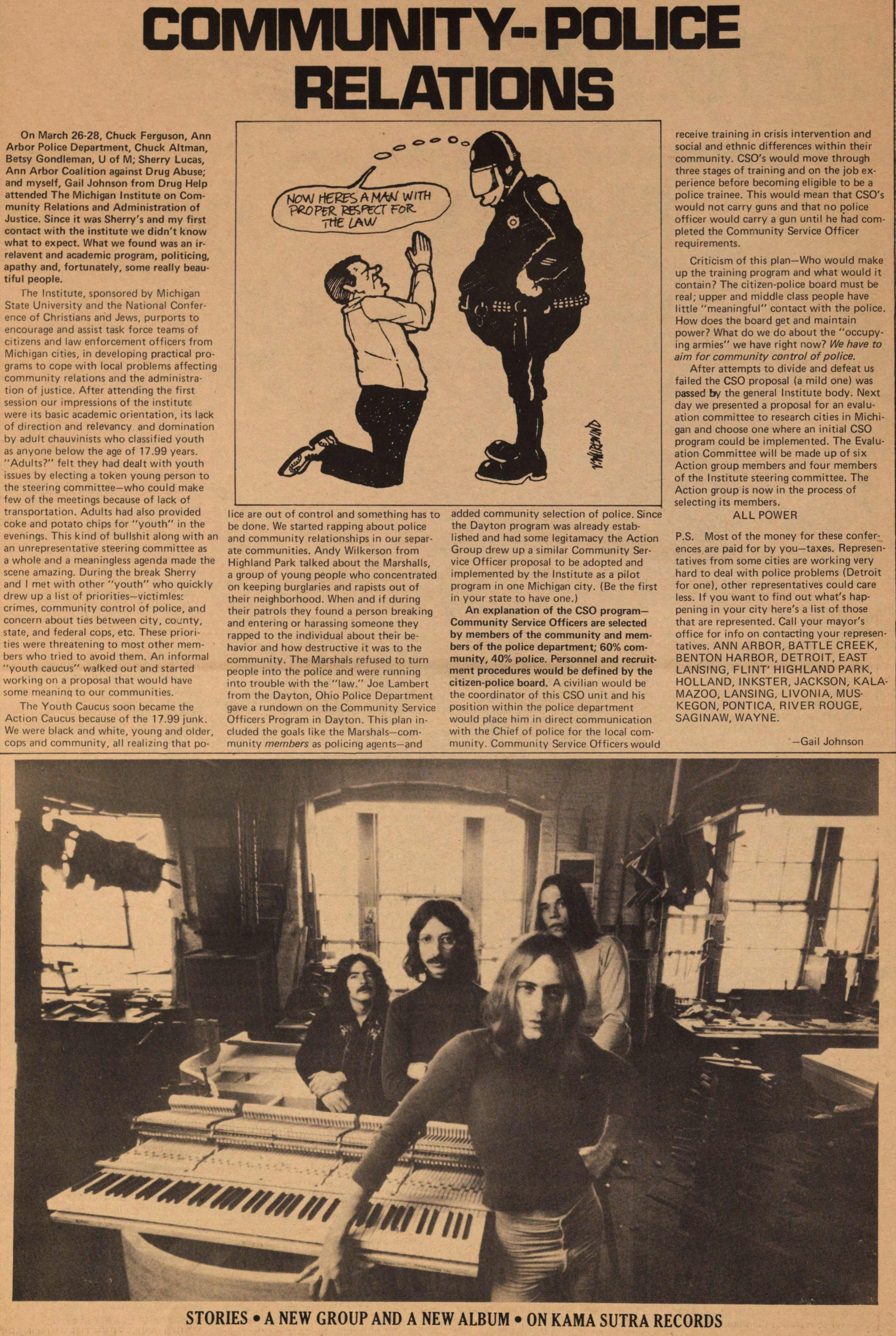 On March 26-28, Chuck Ferguson, Ann Arbor Police Department, Chuck Altman, Betsy Gondleman, U of M; Sherry Lucas, Ann Arbor Coalition against Drug Abuse; and myself, Gail Johnson from Drug Help attended The Michigan Institute on Community Relations and Administration of Justice. Since it was Sherry's and my first contact with the institute we didn't know what to expect. What we found was an irrelevant and academic program, politicing, apathy and, fortunately, some really beautiful people.

The Institute, sponsored by Michigan State University and the National Conference of Christians and Jews, purports to encourage and assist task force teams of citizens and law enforcement officers from Michigan cities, in developing practical programs to cope with local problems affecting community relations and the administration of justice. After attending the first session our impressions of the institute were its basic academic orientation, its lack of direction and relevancy and domination by adult chauvinists who classified youth as anyone below the age of 17.99 years. "Adults?" felt they had dealt with youth issues by electing a token young person to the steering committee -- who could make few of the meetings because of lack of transportation. Adults had also provided coke and potato chips for "youth" in the evenings. This kind of bullshit along with an an unrepresentative steering committee as a whole and a meaningless agenda made the scene amazing. During the break Sherry and I met with other "youth" who quickly drew up a list of priorities -- victimless crimes, community control of police, and concern about ties between city, county, state, and federal cops, etc. These priorities were threatening to most other members who tried to avoid them. An informal "youth caucus" walked out and started working on a proposal that would have some meaning to our communities.

The Youth Caucus soon became the Action Caucus because of the 17.99 junk. We were black and white, young and older, cops and community, all realizing that police are out of control and something has to be done. We started rapping about police and community relationships in our separate communities. Andy Wilkerson from Highland Park talked about the Marshals, a group of young people who concentrated on keeping burglaries and rapists out of their neighborhood. When and if during their patrols they found a person breaking and entering or harassing someone they rapped to the individual about their behavior and how destructive it was to the community. The Marshals refused to turn people into the police and were running into trouble with the "law." Joe Lambert from the Dayton, Ohio Police Department gave a rundown on the Community Service Officers Program in Dayton. This plan included the goals like the Marshals -- community members as policing agents -- and added community selection of police. Since the Dayton program was already established and had some legitimacy the Action Group drew up a similar Community Service Officer proposal to be adopted and implemented by the Institute as a pilot program in one Michigan city. (Be the first in your state to have one.)

An explanation of the CSO program -- Community Service Officers are selected by members of the community and members of the police department; 60% community, 40% police. Personnel and recruitment procedures would be defined by the citizen-police board. A civilian would be the coordinator of this CSO unit and his position within the police department would place him in direct communication with the Chief of police for the local community. Community Service Officers would receive training in crisis intervention and social and ethnic differences within their community. CSO's would move through three stages of training and on the job experience before becoming eligible to be a police trainee. This would mean that CSO's would not carry guns and that no police officer would carry a gun until he had completed the Community Service Officer requirements.

Criticism of this plan -- Who would make up the training program and what would it contain? The citizen-police board must be real; upper and middle class people have little "meaningful" contact with the police. How does the board get and maintain power? What do we do about the "occupying armies" we have right now? We have to aim for community control of police.

After attempts to divide and defeat us failed the CSO proposal (a mild one) was passed by the general Institute body. Next day we presented a proposal for an evaluation committee to research cities in Michigan and choose one where an initial CSO program could be implemented. The Evaluation Committee will be made up of six Action group members and four members of the Institute steering committee. The Action group is now in the process of selecting its members.

P.S. Most of the money for these conferences are paid for by you -- taxes. Representatives from some cities are working very hard to deal with police problems (Detroit for one), other representatives could care less. If you want to find out what's happening in your city here's a list of those that are represented. Cali your mayor's office for info on contacting your representatives. ANN ARBOR, BATTLE CREEK, BENTON HARBOR, DETROIT, EAST LANSING, FLINT, HIGHLAND PARK, HOLLAND, INKSTER, JACKSON, KALAMAZOO, LANSING, LIVONIA, MUSKEGON, PONTIAC, RIVER ROUGE, SAGINAW, WAYNE.

"NOW HERE'S A MAN WITH PROPER RESPECT FOR THE LAW"