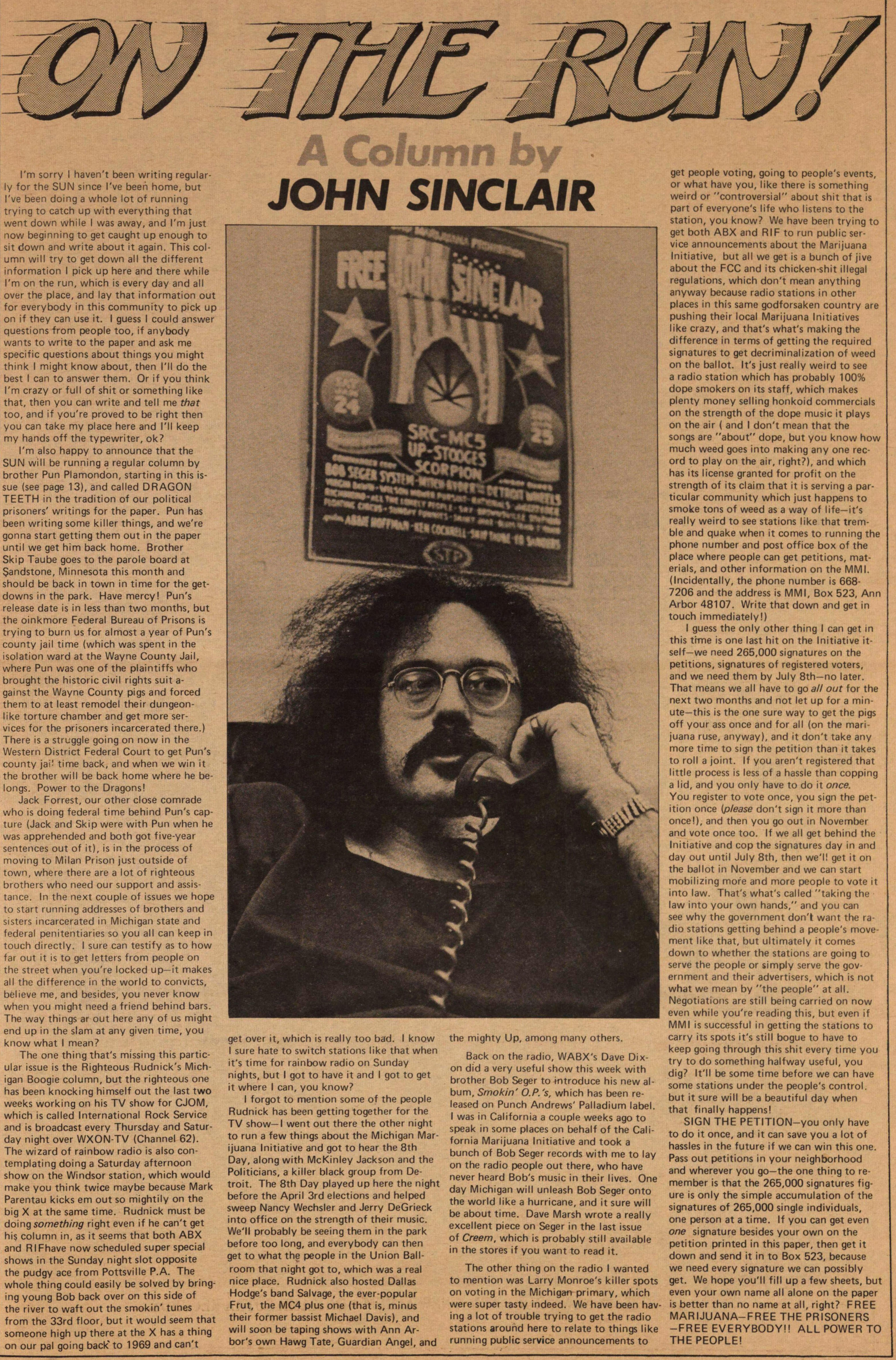 A Column by JOHN SINCLAIR

I'm sorry I haven't been writing regularly for the SUN since I've been home, but I've been doing a whole lot of running trying to catch up with everything that went down while I was away, and I'm just now beginning to get caught up enough to sit down and write about it again. This column will try to get down all the different information I pick up here and there while I'm on the run, which is every day and all over the place, and lay that information out for everybody in this community to pick up on if they can use it. I guess I could answer questions from people too, if anybody wants to write to the paper and ask me specific questions about things you might think I might know about, then I'll do the best I can to answer them. Or if you think I'm crazy or full of shit or something like that, then you can write and tell me that too, and if you're proved to be right then you can take my place here and I'll keep my hands off the typewriter, ok?

I'm also happy to announce that the SUN will be running a regular column by brother Pun Plamondon, starting in this issue (see page 13), and called DRAGON TEETH in the tradition of our political prisoners' writings for the paper. Pun has been writing some killer things, and we're gonna start getting them out in the paper until we get him back home. Brother Skip Taube goes to the parole board at Sandstone, Minnesota this month and should be back in town in time for the getdowns in the park. Have mercy! Pun's release date is in less than two months, but the oinkmore Federal Bureau of Prisons is trying to burn us for almost a year of Pun's county jail time (which was spent in the isolation ward at the Wayne County Jail, where Pun was one of the plaintiffs who brought the historic civil rights suit against the Wayne County pigs and forced them to at least remodel their dungeonlike torture chamber and get more services for the prisoners incarcerated there.) There is a struggle going on now in the Western District Federal Court to get Pun's county jail time back, and when we win it the brother will be back home where he belongs. Power to the Dragons!

Jack Forrest, our other close comrade who is doing federal time behind Pun's capture (Jack and Skip were with Pun when he was apprehended and both got five-year sentences out of it), is in the process of moving to Milan Prison just outside of town, where there are a lot of righteous brothers who need our support and assistance. In the next couple of issues we hope to start running addresses of brothers and sisters incarcerated in Michigan state and federal penitentiaries so you all can keep in touch directly. I sure can testify as to how far out it is to get letters from people on the street when you're locked up -- it makes all the difference in the world to convicts, believe me, and besides, you never know when you might need a friend behind bars. The way things are out here any of us might end up in the slam at any given time, you know what I mean?

The one thing that's missing this particular issue is the Righteous Rudnick's Michigan Boogie column, but the righteous one has been knocking himself out the last two weeks working on his TV show for CJOM, which is called International Rock Service and is broadcast every Thursday and Saturday night over WXON-TV (Channel 62). The wizard of rainbow radio is also contemplating doing a Saturday afternoon show on the Windsor station, which would make you think twice maybe because Mark Parentau kicks em out so mightily on the big X at the same time. Rudnick must be doing something right even if he can't get his column in, as it seems that both ABX and RIF have now scheduled super special shows in the Sunday night slot opposite the pudgy ace from Pottsville P.A. The whole thing could easily be solved by bringing young Bob back over on this side of the river to waft out the smokin' tunes from the 33rd floor, but it would seem that someone high up there at the X has a thing on our pal going back to 1969 and can't get over it, which is really too bad. I know I sure hate to switch stations like that when it's time for rainbow radio on Sunday nights, but I got to have it and I got to get it where I can, you know?

I forgot to mention some of the people Rudnick has been getting together for the TV show -- I went out there the other night to run a few things about the Michigan Marijuana Initiative and got to hear the 8th Day, along with McKinley Jackson and the Politicians, a killer black group from Detroit. The 8th Day played up here the night before the April 3rd elections and helped sweep Nancy Wechsler and Jerry DeGrieck into office on the strength of their music. We'll probably be seeing them in the park before too long, and everybody can then get to what the people in the Union Ballroom that night got to, which was a real nice place. Rudnick also hosted Dallas Hodge's band Salvage, the ever-popular Frut, the MC4 plus one (that is, minus their former bassist Michael Davis), and will soon be taping shows with Ann Arbor's own Hawg Tate, Guardian Angel, and the mighty Up, among many others.

Back on the radio, WABX's Dave Dixon did a very useful show this week with brother Bob Seger to introduce his new album, Smokin' O.P.'s, which has been released on Punch Andrews' Palladium label. I was in California a couple weeks ago to speak in some places on behalf of the California Marijuana Initiative and took a bunch of Bob Seger records with me to lay on the radio people out there, who have never heard Bob's music in their lives. One day Michigan will unleash Bob Seger onto the world like a hurricane, and it sure will be about time. Dave Marsh wrote a really excellent piece on Seger in the last issue of Creem, which is probably still available in the stores if you want to read it.

The other thing on the radio I wanted to mention was Larry Monroe's killer spots on voting in the Michigan primary, which were super tasty indeed. We have been having a lot of trouble trying to get the radio stations around here to relate to things like running public service announcements to get people voting, going to people's events, or what have you, like there is something weird or "controversial" about shit that is part of everyone's life who Iistens to the station, you know? We have been trying to get both ABX and RIF to run public service announcements about the Marijuana Initiative, but all we get is a bunch of jive about the FCC and its chicken-shit illegal regulations, which don't mean anything anyway because radio stations in other places in this same godforsaken country are pushing their local Marijuana Initiatives like crazy, and that's what's making the difference in terms of getting the required signatures to get decriminalization of weed on the ballot. It's just really weird to see a radio station which has probably 100% dope smokers on its staff, which makes plenty money selling honkoid commercials on the strength of the dope music it plays on the air (and I don't mean that the songs are "about" dope, but you know how much weed goes into making any one record to play on the air, right?), and which has its license granted for profit on the strength of its claim that it is serving a particular community which just happens to smoke tons of weed as a way of life -- it's really weird to see stations like that tremble and quake when it comes to running the phone number and post office box of the place where people can get petitions, materials, and other information on the MMI. (Incidentally, the phone number is 668-7206 and the address is MMI, Box 523, Ann Arbor 48107. Write that down and get in touch immediately!)

I guess the only other thing I can get in this time is one last hit on the Initiative itself -- we need 265,000 signatures on the petitions, signatures of registered voters, and we need them by July 8th -- no later. That means we all have to go all out for the next two months and not let up for a minute -- this is the one sure way to get the pigs off your ass once and for all (on the marijuana ruse, anyway), and it don't take any more time to sign the petition than it takes to roll a joint. If you aren't registered that little process is less of a hassle than copping a lid, and you only have to do it once. You register to vote once, you sign the petition once (please don't sign it more than once!), and then you go out in November and vote once too. If we all get behind the Initiative and cop the signatures day in and day out until July 8th, then we'll get it on the ballot in November and we can start mobilizing more and more people to vote it into law. That's what's called "taking the law into your own hands," and you can see why the government don't want the radio stations getting behind a people's movement like that, but ultimately it comes down to whether the stations are going to serve the people or simply serve the government and their advertisers, which is not what we mean by "the people" at all. Negotiations are still being carried on now even while you're reading this, but even if MMI is successful in getting the stations to carry its spots it's still bogue to have to keep going through this shit every time you try to do something halfway useful, you dig? It'll be some time before we can have some stations under the people's control, but it sure will be a beautiful day when that finally happens!

SIGN THE PETITION -- you only have to do it once, and it can save you a lot of hassles in the future if we can win this one. Pass out petitions in your neighborhood and wherever you go -- the one thing to remember is that the 265,000 signatures figure is only the simple accumulation of the signatures of 265,000 single individuals, one person at a time. If you can get even one signature besides your own on the petition printed in this paper, then get it down and send it in to Box 523, because we need every signature we can possibly get. We hope you'll fill up a few sheets, but even your own name all alone on the paper is better than no name at all, right? FREE MARIJUANA -- FREE THE PRISONERS  -- FREE EVERYBODY!! ALL POWER TO THE PEOPLE!