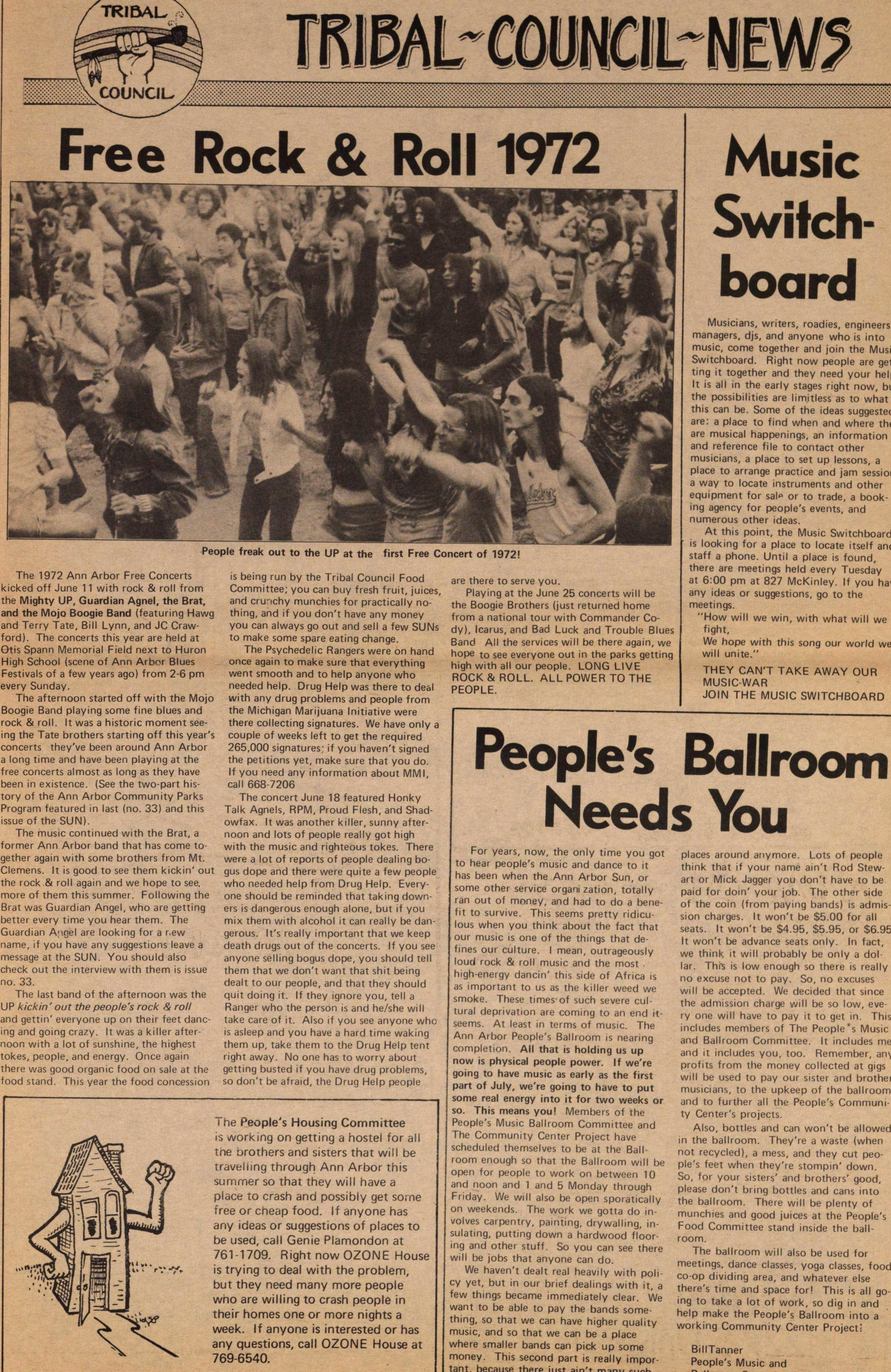 The 1972 Ann Arbor Free Concerts kicked off June 11 with rock & roll from the Mighty UP, Guardian Angel, the Brat, and the Mojo Boogie Band (featuring Hawg and Terry Tate, Bill Lynn, and JC Craword). The concerts this year are held at Otis Spann Memorial Field next to Huron High School (scene of Ann Arbor Blues festivals of a few years ago) from 2-6 pm every Sunday.

The afternoon started off with the Mojo Boogie Band playing some fine blues and rock & roll. It was a historic moment seeing the Tate brothers starting off this year's concerts they've been around Ann Arbor a long time and have been playing at the free concerts almost as long as they have been in existence. (See the two-part history of the Ann Arbor Community Parks Program featured in last (no. 33) and this issue of the SUN).

The music continued with the Brat, a former Ann Arbor band that has come together again with some brothers from Mt. Clemens. It is good to see them kicking out he rock & roll again and we hope to see more of them this summer. Following the Brat was Guardian Angel, who are getting better every time you hear them. The Guardian Angel are looking for a new name, if you have any suggestions leave a message at the SUN. You should also check out the interview with them is issue no. 33.

The last band of the afternoon was the UP kicking out the people's rock & roll and getting everyone up on their feet dancing and going crazy. It was a killer afternoon with a lot of sunshine, the highest tokes, people, and energy. Once again here was good organic food on sale at the food stand. This year the food concession is being run by the Tribal Council Food Committee; you can buy fresh fruit, juices, and crunchy munchies for practically nothing, and f you don't have any money you can always go out and sell a few SUNs to make some spare eating change.

The Psychedelic Rangers were on hand once again to make sure that everything went smooth and to help anyone who needed help. Drug Help was there to deal with any drug problems and people from the Michigan Marijuana Initiative were there collecting signatures. We have only a couple of weeks left to get the required 265,000 signatures; if you haven't signed the petitions yet, make sure that you do. If you need any information about MMI, call 668-7206.

The concert June 18 featured Honky Talk Angels, RPM, Proud Flesh, and Shadowfax. It was another killer, sunny afternoon and lots of people really got high with the music and righteous tokes. There were a lot of reports of people dealing bogus dope and there were quite a few people who needed help from Drug Help. Everyone should be reminded that taking downers is dangerous enough alone, but if you mix them with alcohol it can really be dangerous. It's really important that we keep death drugs out of the concerts. If you see anyone selling bogus dope, you should tell them that we don't want that shit being dealt to our people, and that they should quit doing it. If they ignore you, tell a Ranger who the person is and he/she will take care of it. Also if you see anyone who is asleep and you have a hard time waking them up, take them to the Drug Help tent right away. No one has to worry about getting busted if you have drug problems, so don't be afraid, the Drug Help people are there to serve you.

Playing at the June 25 concerts will be the Boogie Brothers (just returned home from a national tour with Commander Cody), Icarus, and Bad Luck and Trouble Blues Band All the services will be there again, we hope to see everyone out in the parks getting high with all our people. LONG LIVE ROCK & ROLL. ALL POWER TO THE PEOPLE.

The People's Housing Committee is working on getting a hostel for all the brothers and sisters that will be travelling through Ann Arbor this summer so that they will have a place to crash and possibly get some free or cheap food. If anyone has any ideas or suggestions of places to be used, call Genie Plamondon at 761-1709. Right nowOZONE House is trying to deal with the problem, but they need many more people who are willing to crash people in their homes one or more nights a week. If anyone is interested or has any questions, call OZONE House at 769-6540.

Musicians, writers, roadies, engineers, managers, djs, and anyone who is into music, come together and join the Music Switchboard. Right now people are getting together and they need your help. It is all in the early stages right now, but the possibilities are limitless as to what this can be. Some of the ideas suggested are: a place to find when and where there are musical happenings, information and reference file to contact other musicians, a place to set up lessons, a place to arrange practice and jam sessions, a way to locate instruments and other equipment for sale or trade, a booking agency for people's events and numerous other ideas.

At this point, the Music Switchboard is looking for a place to locate itself and staff a phone. Until a place is found, there are meetings held every Tuesday at 6:00 pm at 827 McKinley. If you have any ideas or suggestions, go to the meetings.

"How will we win, with what will we fight,

We hope with this song our world will unite."

THEY CAN'T TAKE AWAY OUR MUSIC-WAR

For years, now, the only time you got to hear people's music and dance to it has been when the Ann Arbor Sun, or some other service organisation, totally run out of money, and had to do a benefit to survive. This seems pretty ridiculous when you think about the fact of our music is one of the things that defines our culture. I mean outrageously loud rock and roll music and the most high energy dancing this side of  Africa is as important to us as the killer weed we smoke. These times of such several deprivation are coming to an end it seems. At least in terms of music. The Ann Arbor People's Ballroom is nearing completion. All that is holding us up is physical people power. If we are going to have music as early as the first part of July, we are going to have to put some real energy into it for two weeks or so. This means you! Members of the People's Music Ballroom Committee and the Community Center project have schedule themselves to be at the  Ballroom enough so that the Ballroom will be open for people to work on between 10 and noon and 1 to 5 Monday through Friday. We will be open sporadically on weekends.The work we gotta do involves carpentry, painting, drywalling, insulating, putting down a hardwood flooring and other stuff. So you can see there will be jobs that anyone can do.

We haven't dealt really heavy with policy yet, but in our brief dealings with it, a few things came immediately clear. We want to be able to pay the bands something, so we can have higher quality music and so that we can be a place where smaller bands can pick up some money. This second part is really important because there isn't many such places   around anymore. Lots of people think that if you ain't  Rod Stewart or Mick Jagger you don't have to be paid for doing your job. The other side of the coin (from paying bands) is admission charges. It won't be $5.00 for all seats. It won't be $4.95, $5.95 or $6.95. It won't be advanced seats only. In fact we think It  will be probably only a dollar. This is low enough so there is really no excuse not to pay. So, no excuses will be accepted. . We decided that since the admission will be so low, everyone will have to pay it to get in. This includes members of the of The People's  Music and Ballroom Committee. It includes me and includes you, too. Remember any profits from the money collected at gigs will be used to pay our sisters and brothers musicians, to the upkeep of the ballroom and to further the People's Community Center's projects.

The ballroom will also used for meetings, dance classes, yoga classes, food co-op diving area and what ever else there is time and space for! This is all going to  take a lot of work, so dig in and help make the People's Ballroom into a Community Center Project!

A picture reads: People freak out to the UP at the first Free Concert of 1972!