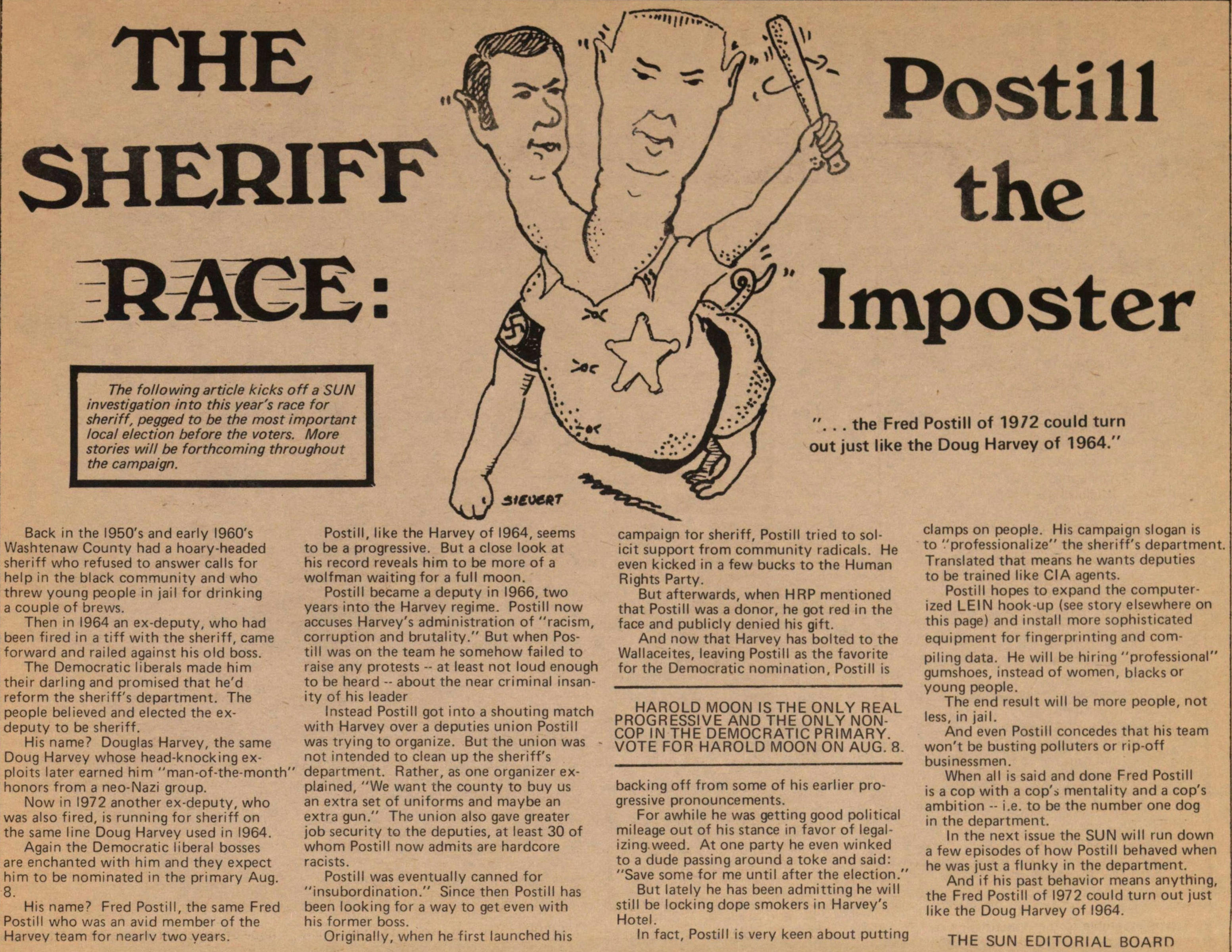 The folio wing article kicks off a SUN investigation into this year's race for sheriff, pegged to be the most important local election before the voters. More stories will be forthcoming throughout the campaign. Back n the 1950's and early 1960's Washtenaw County had a hoary-headed sheriff who refused to answer calis for help n the black community and who threw young people in jail for drinking a couple of brews. Then in 1964 an ex-deputy, who had been fired in a tiff with the sheriff, came forward and railed against his old boss. The Democratie liberáis made him their darling and promised that he'd reform the sheriff s department. The people believed and elected the exdeputy to be sheriff. His name? Douglas Harvey, the same Doug Harvey whose head-knocking exploits later earned him "man-of-the-month' honors from a neo-Nazi group. Now in 1972 another ex-deputy, who was also fired, is running for sheriff on the same line Doug Harvey used in 1964. Again the Democratie liberal bosses are enchanted with him and they expect him to be nominated in the primary Aug. 8. His name? Fred Postill, the same Fred Postill who was an avid member of the Harvev team for nearlv two years. Postill, like the Harvey of 1964, seems to be a progressive. But a close look at his record reveáis him to be more of a wolfman waiting for a ful t moon. Postill became a deputy n 1966, two years nto the Harvey regime. Postill now accuses Harvey's administration of "racism, corruption and brutality." But when Postill was on the team he somehow failed to raise any protests -- at least not loud enough to be heard -- about the near criminal insanity of his leader Instead Postill got into a shouting match with Harvey over a deputies unión Postill was trying to organize. But the unión was - not intended to clean up the sheriff's ' department. Rather, as one organizer explained, "We want the county to buy us an extra set of uniforms and maybe an extra gun." The unión also gave greater job security to the deputies, at least 30 of whom Postill now admits are hardcore racists. Postill was eventually canned for "nsubordination." Since then Postill has been looking for a way to get even with his former boss. Originally, when he first launched his campaign tor sheriff, Postill tried to solcit support from community radicáis. He even kicked in a few bucks to the Human Rights Party. But afterwards, when HRP mentioned that Postill was a donor, he got red in the face and publicly denied his gift. And now that Harvey has bolted to the Wallaceites, leaving Postill as the favorite for the Democratie nomination, Postill is HAROLD MOON IS THE ONLY REAL PROGRESSIVE AND THE ONLY NONCOP IN THE DEMOCRATIC PRIMARY. VOTE FOR HAROLD MOON ON AUG. 8. backing off from some of his earlier progressive pronouncements. For awhile he was getting good political mileage out of his stance in favor of legalizing.weed. At one party he even winked to a dude passing around a toke and said: "Save some for me until after the election." But lately he has been admitting he will still be locking dope smokers in Harvey's Hotel. In fact, Postill is very keen about putting clamps on peopla. His campaign slogan is to "professionalize" the sheriff's department. Translated that means he wants deputies to be trained like CIA agents. Postill hopes to expand the computerzed LEIN hook-up (see story elsewhere on this page) and nstall more sophisticated equipment for fingerprinting and compiling data. He will be hiring "professional" gumshoes, instead of women, blacks or young people. The end result will be more people, not less, in jail. And even Postill concedes that his team won't be busting polluters or rip-off businessmen. When all is said and done Fred Postill is a cop with a cop'a mentality and a cop's ambition - .e. to be the number one dog in the department. In the next issue the SUN will run down a few episodes of how Postill behaved when he was just a flunky in the department. And if his past behavior means anything, the Fred Postill of 1972 could turn out just like the Doug Harvey of 1964. THE SUN EDITORIAL BOARD ". . . the Fred Postill of 1972 could turn out just like the Doug Harvey of 1964."