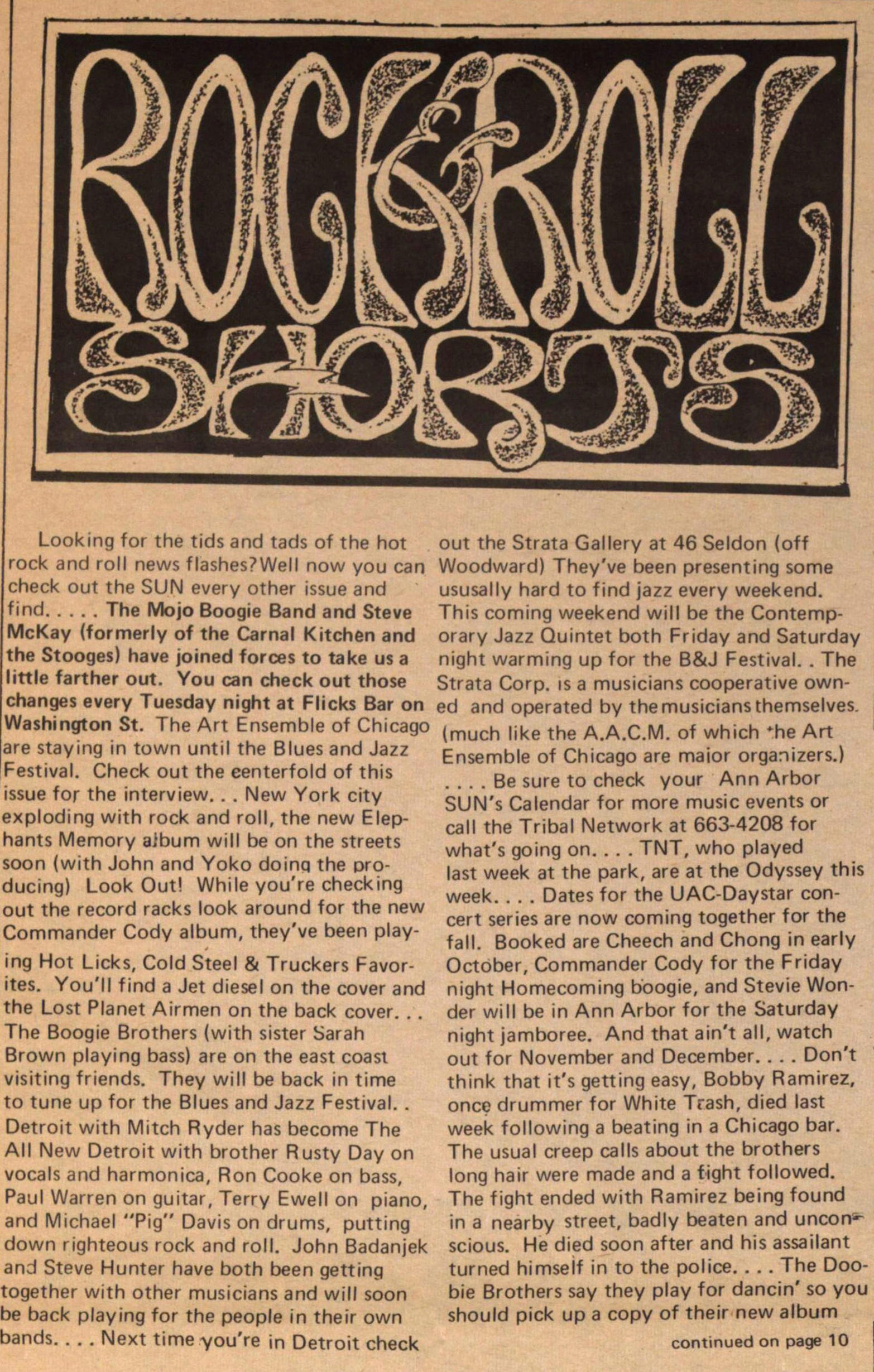 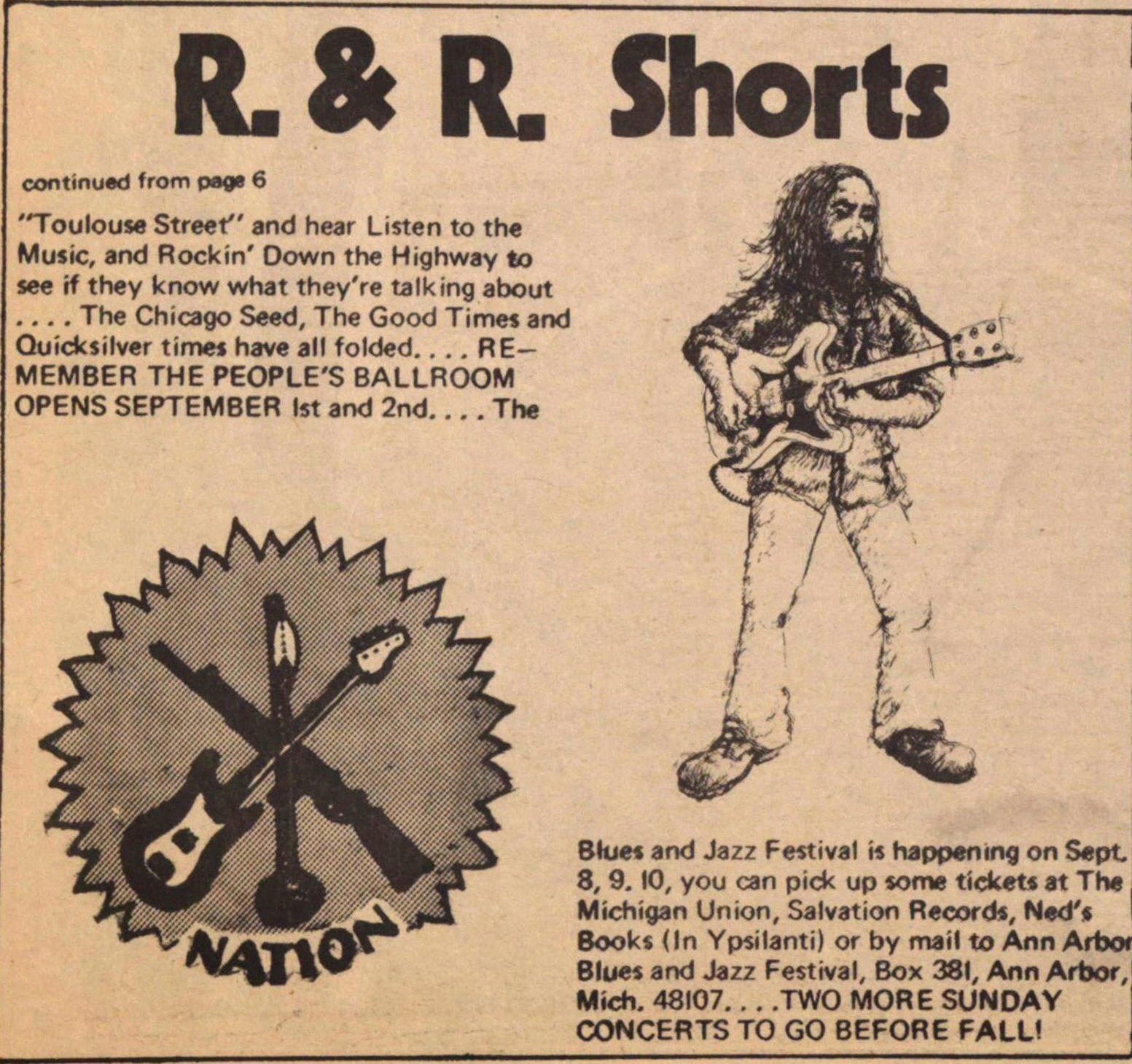 Looking for the tids and tads of the hot rock and roll news flashes? Well now you can check out the SUN every other issue and find. . . . . The Mojo Boogie Band and Steve McKay (formerly of the Carnal Kitchen and the Stooges) have joined forces to take us a little farther out. You can check out those changes every Tuesday night at Flicks Bar on Washington St. The Art Ensemble of Chicago are staying in town until the Blues and Jazz Festival. Check out the centerfold of this issue for the interview. . . New York city exploding with rock and roll, the new Elephants Memory album will be on the streets soon (with John and Yoko doing the producing) Look Out! While you're checking out the record racks look around for the new Commander Cody album, they've been playing Hot Licks, Cold Steel & Truckers Favorites. You'll find a Jet diesel on the cover and the Lost Planet Airmen on the back cover. . . The Boogie Brothers (with sister Sarah Brown playing bass) are on the east coast visiting friends. They will be back in time to tune up for the Blues and Jazz Festival. . Detroit with Mitch Ryder has become The All New Detroit with brother Rusty Day on vocals and harmonica, Ron Cooke on bass, Paul Warren on guitar, Terry Ewell on piano, and Michael "Pig" Davis on drums, putting down righteous rock and roll. John Badanjek and Steve Hunter have both been getting together with other musicians and will soon be back playing for the people in their own bands. . . . Next time you're in Detroit check out the Strata Gallery at 46 Seldon (off Woodward) They've been presenting some usually hard to find jazz every weekend, this coming weekend will be the Contemporary Jazz Quintet both Friday and Saturday light warming up for the B&J Festival. . The Strata Corp. is a musicians cooperative owned and operated by the musicians themselves. (much like the A.A.C.M. of which he Art Ensemble of Chicago are major organizers.) . . . . Be sure to check your Ann Arbor SUN's Calendar for more music events or call the Tribal Network at 663-4208 for what's going on. . . . TNT, who played last week at the park, are at the Odyssey this week. . . . Dates for the UAC-Daystar concert series are now coming together for the fall. Booked are Cheech and Chong in early October, Commander Cody for the Friday night Homecoming boogie, and Stevie Wonder will be in Ann Arbor for the Saturday night jamboree. And that ain't all, watch out for November and December. . . . Don't think that it's getting easy, Bobby Ramirez, once drummer for White Trash, died last week following a beating in a Chicago bar. The usual creep calls about the brothers long hair were made and a fight followed. The fight ended with Ramírez being found in a nearby street, badly beaten and unconscious. He died soon after and his assailant turned himself in to the police. . . . The Doobie Brothers say they play for dancin' so you should pick up a copy of their new album

"Toulouse Street" and hear Listen to the Music, and Rockin' Down the Highway to see if they know what they're talking about . . . . The Chicago Seed, The Good Times and Quicksilver times have all folded. . . . REMEMBER THE PEOPLE'S BALLROOM OPENS SEPTEMBER 1st and 2nd. . . . The Blues and Jazz Festival is happening on Sept 8, 9. 10, you can pick up some tickets at The Michigan Union, Salvation Records, Ned's Books (In Ypsilanti) or by mail to Ann Arbor Blues and Jazz Festival, Box 381, Ann Arbor, Mich. 48107. . . . TWO MORE SUNDAY CONCERTS TO GO BEFORE FALL!