They Cage Our Kids! 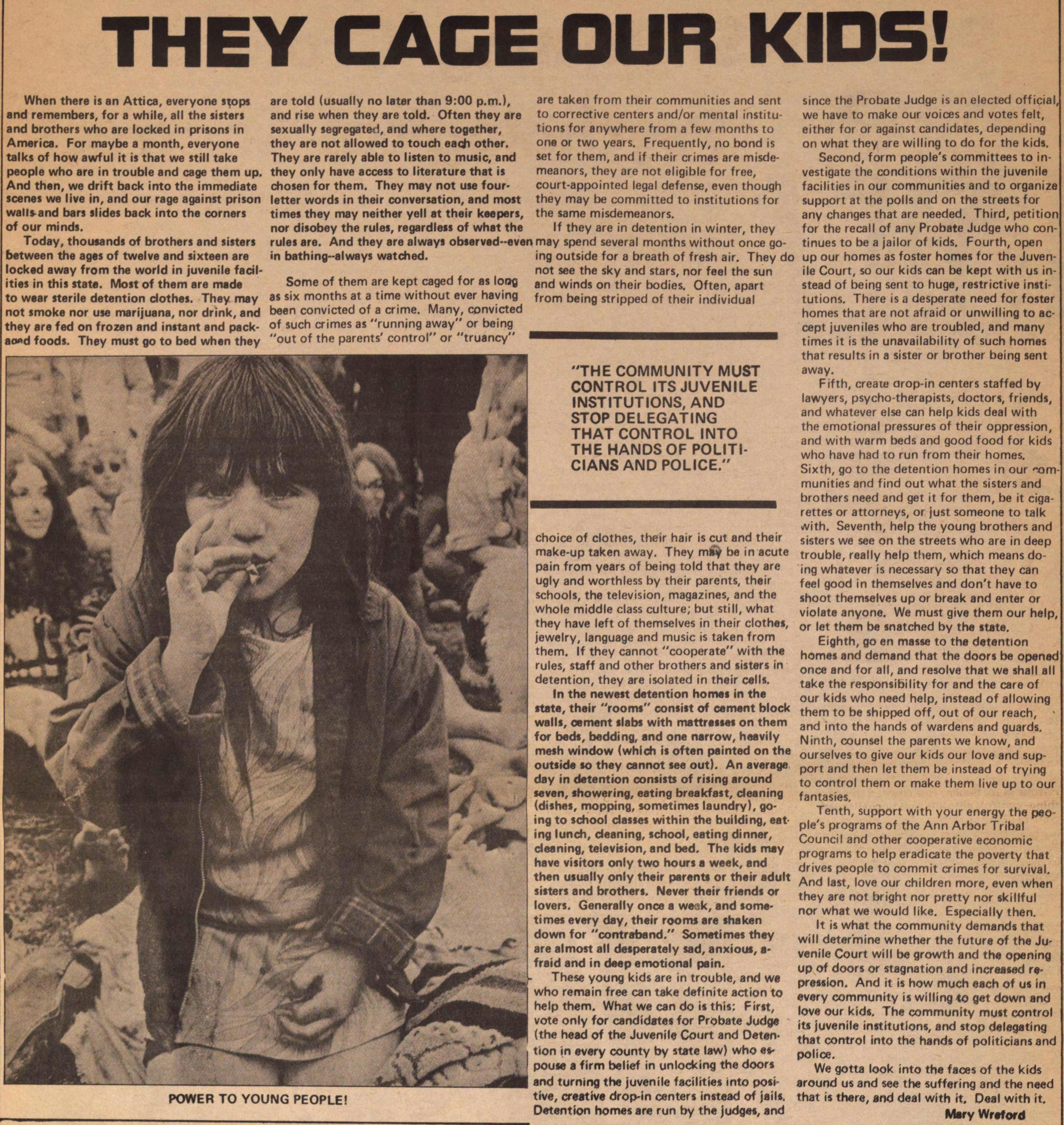 When there is an Attica, everyone stops and remembers, for a while, all the sisters and brothers who are locked in prisons in America. For maybe a month, everyone talks of how awful it is that we still take people who are in trouble and cage them up. And then, we drift back into the immediate scenes we live in, and our rage against prison walis and bars slides back into the corners of our minds.

Today, thousands of brothers and sisters between the ages of twelve and sixteen are locked away from the world in juvenile facilities in this state. Most of them are made to wear sterile detention clothes. They may not smoke nor use marijuana, nor drink, and they are fed on frozen and instant and packaged foods. They must go to bed when they are told (usually no later than 9:00 p.m.), and rise when they are told. Often they are sexually segregated, and where together, they are not allowed to touch each other. They are rarely able to listen to music, and they only have access to literature that is chosen for them. They may not use four-letter words in their conversation, and most times they may neither yell at their keepers, nor disobey the rules, regardless of what the rules are. And they are always observed--even in bathing--always watched.

Some of them are kept caged for as long as six months at a time without ever having been convicted of a crime. Many, convicted of such crimes as "running away" or being "out of the parents' control" or "truancy" ' are taken from their communities and sent to corrective centers and/or mental institutions for anywhere from a few months to one or two years. Frequently, no bond is set for them, and i their crimes are misdemeanors, they are not eligible for free, court-appointed legal defense, even though they may be committed to institutions for the same misdemeanors.

If they are in detention in winter, they may spend several months without once going outside for a breath of fresh air. They do not see the sky and stars, nor feel the sun and winds on their bodies. Often, apart from being stripped of their individual choice of clothes, their hair is cut and their make-up taken away. They may be in acute pain from years of being told that they are ugly and worthless by their parents, their schools, the television, magazines, and the whole middle class culture; but still, what they have left of themselves in their clothes, jewelry, language and music is taken from them. If they cannot "cooperate" with the rules, staff and other brothers and sisters in detention, they are isolated in their cells.

In the newest detention homes in the state, their "rooms" consist of cement block walls, cement slabs with mattresses on them for beds, bedding, and one narrow, heavily mesh window (which is often painted on the outside so they cannot see out). An average day in detention consists of rising around seven, showering, eating breakfast, cleaning (dishes, mopping, sometimes laundry), going to school classes within the building, eating lunch, cleaning, school, eating dinner, cleaning, television, and bed. The kids may have visitors only two hours a week, and then usually only their parents or their adult sisters and brothers. Never their friends or lovers. Generally once a week, and sometimes every day, their rooms are shaken down for "contraband." Sometimes they are almost all desperately sad, anxious, afraid and in deep emotional pain.

These young kids are in trouble, and we who remain free can take definite action to help them. What we can do it this; First, vote only for candidates for Probate Judge (the head of the Juvenile Court and Detention in every county by state law) who epouse a firm belief in unlocking the door and turning the juvenile facilities into positive, creative drop-in centers instead of jails. Detention homes are run by the judges, and since the Probate Judge is an elected official, we have to make our voices and votes felt, either for or against candidates, depending on what they are willing to do for the kids.

Second, form people's committees to investigate the conditions within the juvenile facilities in our communities and to organize support at the polls and on the streets for any changes that are needed. Third, petition for the recall of any Probate Judge who continues to be a jailor of kids. Fourth, open up our homes as foster hornet for the Juvenile Court, so our kids can be kept with us instead of being sent to huge, restrictive institutions. There is a desperate need for foster homes that are not afraid or unwilling to accept juveniles who are troubled, and many times it is the unavailability of such homes that results in a sister or brother being sent away.

Fifth, create drop-in centers staffed by lawyers, psycho-therapists, doctors, friends, and whatever else can help kids deal with the emotional pressures of their oppression, and with warm beds and good food for kids who have had to run from their homes. Sixth, go to the detention homes in our communities and find out what the sisters and brothers need and get it for them, be it cigarettes or attorneys, or just someone to talk with. Seventh, help the young brothers and sisters we see on the streets who are in deep trouble, really help them, which means doing whatever is necessary so that they can feel good in themselves and don't have to shoot themselves up or break and enter or violate anyone. We must give them our help, or let them be snatched by the state.

Eighth, go en masse to the detention homes and demand that the doors be opened once and for all, and resolve that we shall all take the responsibility for and the care of our kids who need help, instead of allowing them to be shipped off, out of our reach, and into the hands of wardens and guards. Ninth, counsel the parents we know, and ourselves to give our kids our love and support and then let them be instead of trying to control them or make them live up to our fantasies.

Tenth, support with your energy the people's programs of the Ann Arbor Tribal Council and other cooperative economic programs to help eradicate the poverty that drives people to commit crimes for survival. And last, love our children more, even when they are not bright nor pretty nor skillful nor what we would like. Especially then.

It is what the community demands that will determine whether the future of the Juvenile Court wilt be growth and the opening up of doors or stagnation and increased repression. And it is how much each of us in every community is willing to get down and love our kid. The community must control its juvenile institutions, and stop delegating that control into the hands of politicians and police.

We gotta look into the faces of the kids around us and see the suffering and the need that is there, and deal with it. Deal with it.

"THE COMMUNITY MUST CONTROL ITS JUVENILE INSTITUTIONS, AND STOP DELEGATING THAT CONTROL INTO THE HANDS OF POLITICIANS AND PÓLICE."