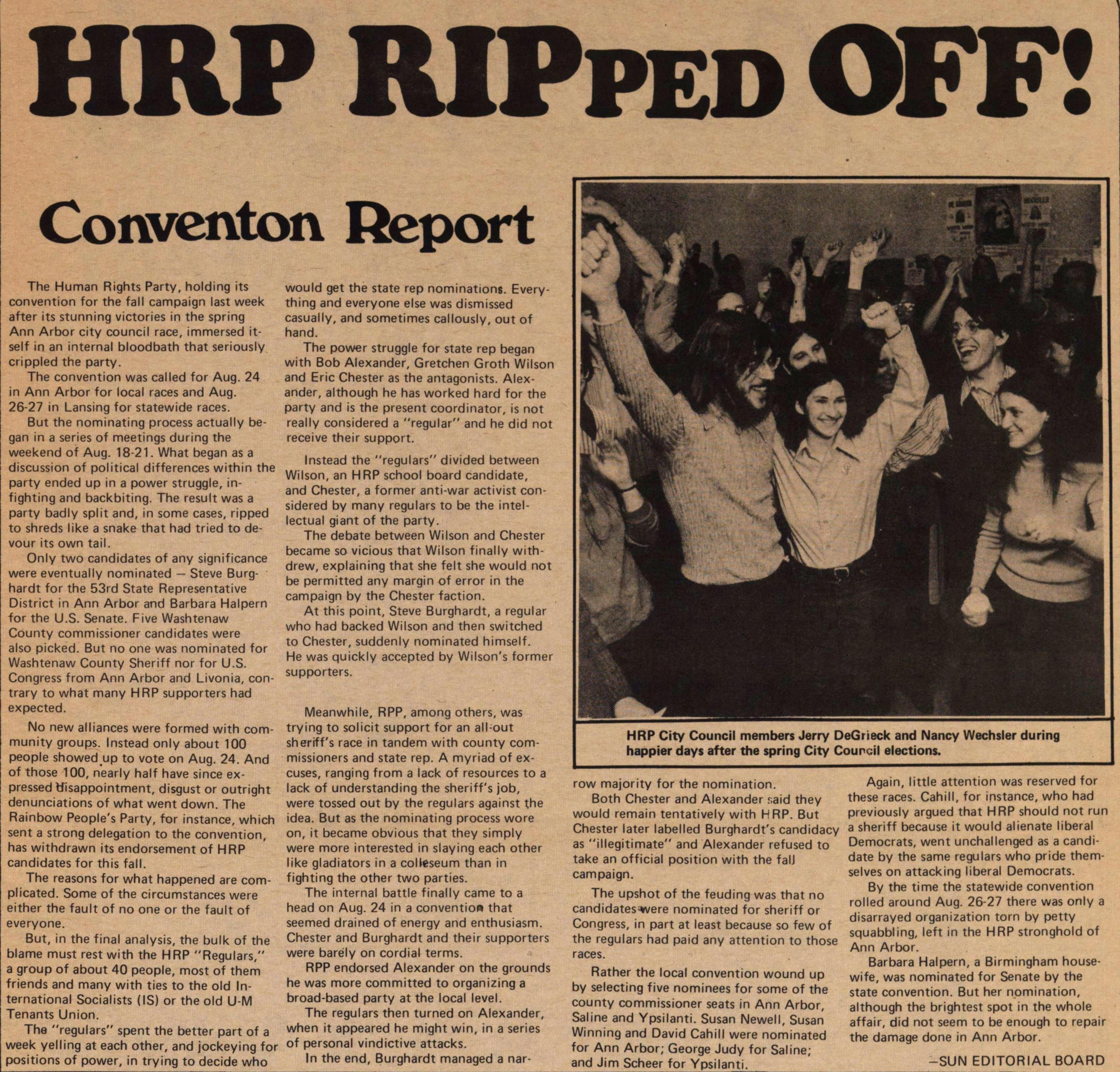 The Human Rights Party, holding its convention for the fall campaign last week after its stunning victories in the spring Ann Arbor city council race, immersed itself in an internal bloodbath that seriously crippled the party.

The convention was called for Aug. 24 in Ann Arbor for local races and Aug. 26-27 in Lansing for statewide races.

But the nominating process actually began in a series of meetings during the weekend of Aug. 18-21. What began as a discussion of political differences within the party ended up in a power struggle, infighting and backbiting. The result was a party badly split and, in some cases, ripped to shreds like a snake that had tried to devour its own tail.

Only two candidates of any significance were eventually nominated – Steve Burghardt for the 53rd State Representative District in Ann Arbor and Barbara Halpern for the U.S. Senate. Five Washtenaw County commissioner candidates were also picked. But no one was nominated for Washtenaw County Sheriff nor for U.S. Congress from Ann Arbor and Livonia, contrary to what many HRP supporters had expected.

No new alliances were formed with community groups. Instead only about 100 people showed up to vote on Aug. 24. And of those 100, nearly half have since expressed disappointment, disgust or outright denunciations of what went down. The Rainbow People's Party, for instance, which sent a strong delegation to the convention, has withdrawn its endorsement of HRP candidates for this fall.

The reasons for what happened are complicated. Some of the circumstances were either the fault of no one or the fault of everyone. But, in the final analysis, the bulk of the blame must rest with the HRP "Regulars," a group of about 40 people, most of them friends and many with ties to the old International Socialists (IS) or the old U-M Tenants Union.

The "regulars" spent the better part of a week yelling at each other, and jockeying for positions of power, in trying to decide who would get the state rep nominations. Everything and everyone else was dismissed casually, and sometimes callously, out of hand.

The power struggle for state rep began with Bob Alexander, Gretchen Groth Wilson and Eric Chester as the antagonists. Alexander, although he has worked hard for the party and is the present coordinator, is not really considered a "regular" and he did not receive their support.

Instead the "regulars" divided between Wilson, an HRP school board candidate, and Chester, a former anti-war activist considered by many regulars to be the intellectual giant of the party.

The debate between Wilson and Chester became so vicious that Wilson finally withdrew, explaining that she felt she would not be permitted any margin of error in the campaign by the Chester faction.

At this point, Steve Burghardt, a regular who had backed Wilson and then switched to Chester, suddenly nominated himself. He was quickly accepted by Wilson's former supporters.

Meanwhile, RPP, among others, was trying to solicit support for an all-out sheriff 's race in tandem with county commissioners and state rep. A myriad of excuses, ranging from a lack of resources to a lack of understanding the sheriff's job, were tossed out by the regulars against the idea. But as the nominating process wore on, it became obvious that they simply were more interested in slaying each other like gladiators in a colleseum than in fighting the other two parties.

The internal battle finally carne to a head on Aug. 24 in a convention that seemed drained of energy and enthusiasm. Chester and Burghardt and their supporters were barely on cordial terms.

RPP endorsed Alexander on the grounds he was more committed to organizing a broad-based party at the local level.

The regulars then turned on Alexander, when it appeared he might win, in a series of personal vindictive attacks.

In the end, Burghardt managed a row majority for the nomination.

Both Chester and Alexander said they would remain tentatively with HRP. But Chester later labelled Burghardt's candidacy as "Ilegitímate" and Alexander refused to take an official position with the fall campaign.

The upshot of the feuding was that no candidates were nominated for sheriff or Congress, in part at least because so few of the regulars had paid any attention to those races.

Rather the local convention wound up by selecting five nominees for some of the county commissioner seats in Ann Arbor, Saline and Ypsilanti. Susan Newell, Susan Winning and David Cahill were nominated for Ann Arbor; George Judy for Saline; and Jim Scheer for Ypsilanti.

Again, little attention was reserved for these races. Cahill, for instance, who had previously argued that HRP should not run a sheriff because it would alienate liberal Democrats, went unchallenged as a candidate by the same regulars who pride themselves on attacking liberal Democrats.

By the time the statewide convention rolled around Aug. 26-27 there was only a disarrayed organization torn by petty squabbling, left in the HRP stronghold of Ann Arbor.

Barbara Halpern, a Birmingham housewife, was nominated for Senate by the state convention. But her nomination, although the brightest spot in the whole affair, did not seem to be enough to repair the damage done in Ann Arbor.