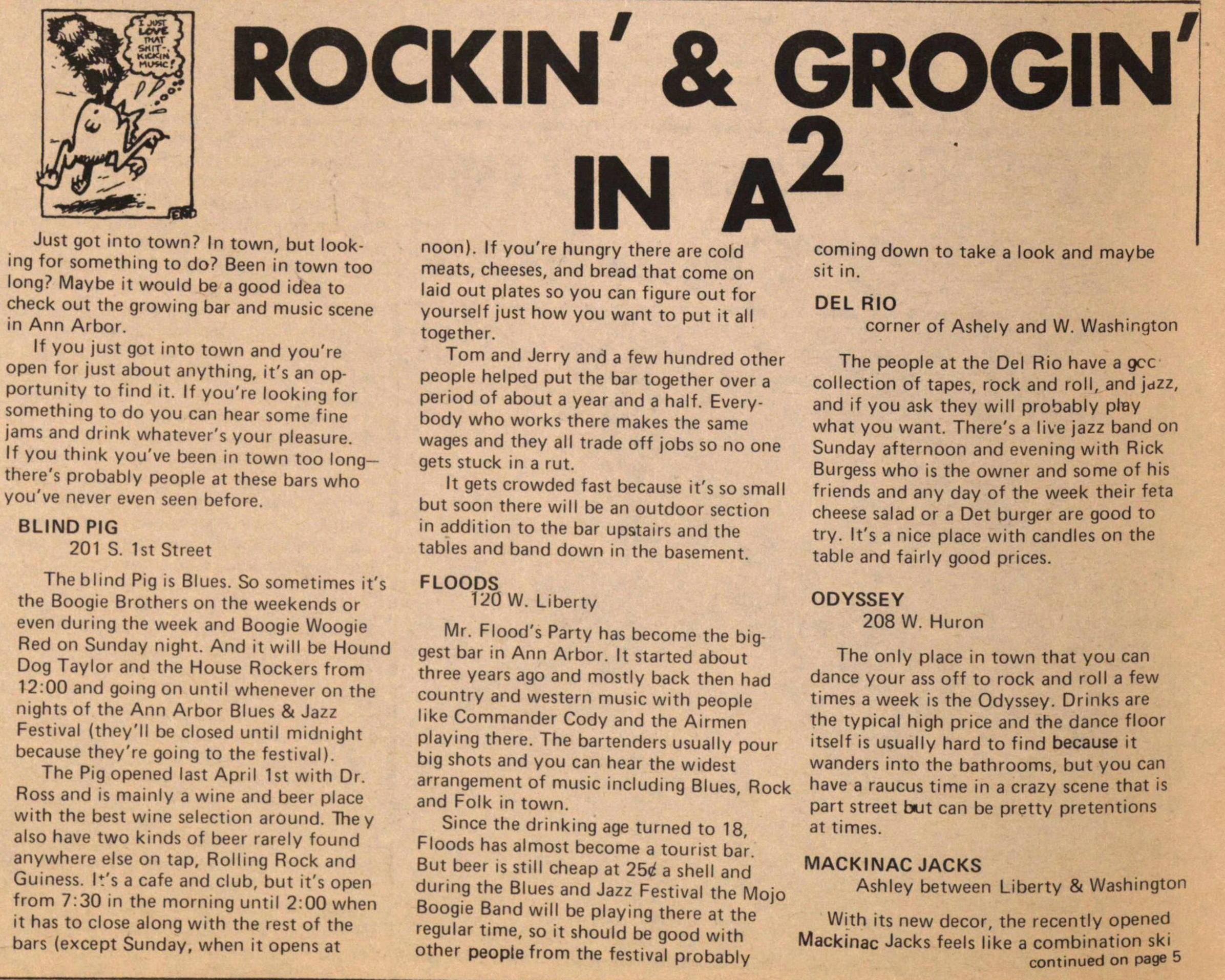 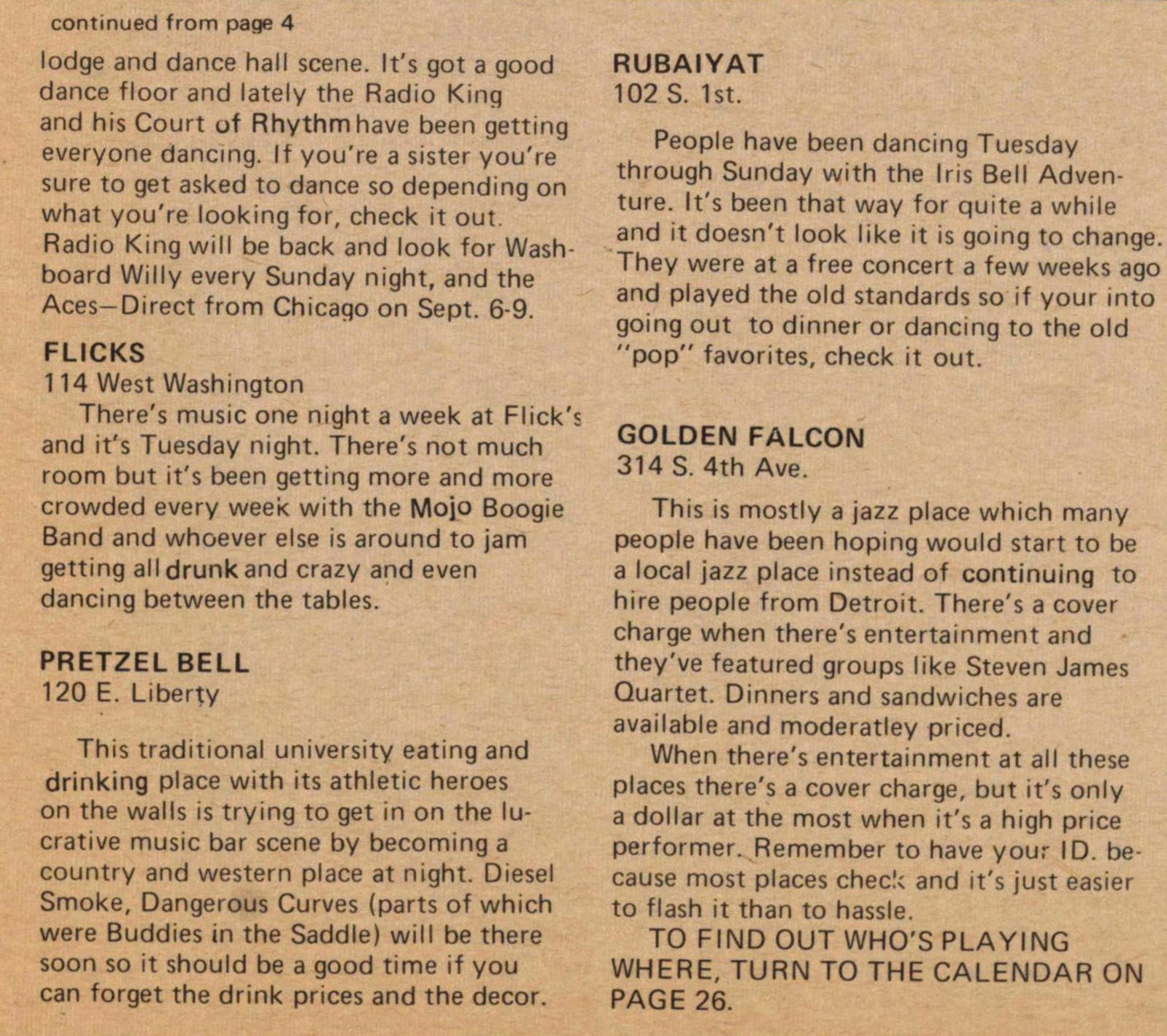 Just got into town? In town, but looking for something to do? Been in town too long? Maybe it would be a good idea to check out the growing bar and music scene in Ann Arbor.

If you just got into town and you're open for just about anything, it's an opportunity to find it. If you're looking for something to do you can hear some fine jams and drink whatever's your pleasure. If you think you've been in town too long there's probably people at these bars who you've never even seen before.

The blind Pig is Blues. So sometimes it's the Boogie Brothers on the weekends or even during the week and Boogie Woogie Red on Sunday night. And it will be Hound Dog Taylor and the House Rockers from 12:00 and going on until whenever on the nights of the Ann Arbor Blues & Jazz Festival (they'll be closed until midnight because they're going to the festival).

The Pig opened last April 1st with Dr. Ross and is mainly a wine and beer place with the best wine selection around. They also have two kinds of beer rarely found anywhere else on tap. Rolling Rock and Guiness. It's a cafe and club, but it's open from 7:30 in the morning until 2:00 when it has to close along with the rest of the bars (except Sunday, when it opens at noon). If you're hungry there are cold meats, cheeses, and bread that come on laid out plates so you can figure out for yourself just how you want to put it all together.

Tom and Jerry and a few hundred other people helped put the bar together over a period of about a year and a half. Everybody who works there makes the same wages and they all trade off jobs so no one gets stuck in a rut. It gets crowded fast because t's so small but soon there will be an outdoor section in addition to the bar upstairs and the tables and band down in the basement.

Mr. Flood's Party has become the biggest bar in Ann Arbor. It started about three years ago and mostly back then had country and western music with people like Commander Cody and the Airmen playing there. The bartenders usually pour big shots and you can hear the widest arrangement of music including Blues, Rock and Folk in town. Since the drinking age turned to 18, Floods has almost become a tourist bar. But beer is still cheap at 25¢ a shell and during the Blues and Jazz Festival the Mojo Boogie Band will be playing there at the regular time, so it should be good with other people from the festival probably coming down to take a look and maybe sit in.

The people at the Del Rio have a good collection of tapes, rock and roll, and jazz, and if you ask they will probably play what you want. There's a live jazz band on Sunday afternoon and evening with Rick Burgess who is the owner and some of his friends and any day of the week their feta cheese salad or a Det burger are good to try. It's a nice place with candles on the table and fairly good prices.

The only place in town that you can dance your ass off to rock and roll a few times a week is the Odyssey. Drinks are the typical high price and the dance floor itself is usually hard to find because it wanders into the bathrooms, but you can have a raucus time in a crazy scene that is part street but can be pretty pretentions at times.

With its new decor, the recently opened Mackinac Jacks feels like a combination ski

continued on page 5 continued from page 4

lodge and dance hall scene. It's got a good dance floor and lately the Radio King and his Court of Rhythm have been getting everyone dancing. If you're a sister you're sure to get asked to dance so depending on what you're looking for, check it out Radio King will be back and look for Washboard Willy every Sunday night, and the Aces–Direct from Chicago on Sept. 6-9.

There's music one night a week at Flick's and it's Tuesday night. There's not much room but it's been getting more and more crowded every week with the Mojo Boogie Band and whoever else is around to jam getting all drunk and crazy and even dancing between the tables.

This traditional university eating and drinking place with its athletic heroes on the walls is trying to get in on the lucrative music bar scene by becoming a country and western place at night. Diesel Smoke, Dangerous Curves (parts of which were Buddies in the Saddle) will be there soon so it should be a good time if you can forget the drink prices and the decor.

RUBAIYAT 102 S. 1st. People have been dancing Tuesday through Sunday with the Iris Bell Adventure. It's been that way for quite a while and it doesn't look like it is going to change. They were at a free concert a few weeks ago and played the old standards so if your into going out to dinner or dancing to the old "pop" favorites, check it out.

This is mostly a jazz place which many people have been hoping would start to be a local jazz place instead of continuing to hire people from Detroit. There's a cover charge when there's entertainment and they've featured groups like Steven James Quartet. Dinners and sandwiches are available and moderatley priced.

When there's entertainment at all these places there's a cover charge, but it's only a dollar at the most when it's a high price performer. Remember to have your ID. because most places check and it's just easier to flash it than to hassle. TO FIND OUT WHO'S PLAYING WHERE, TURN TO THE CALENDAR ON PAGE 26.