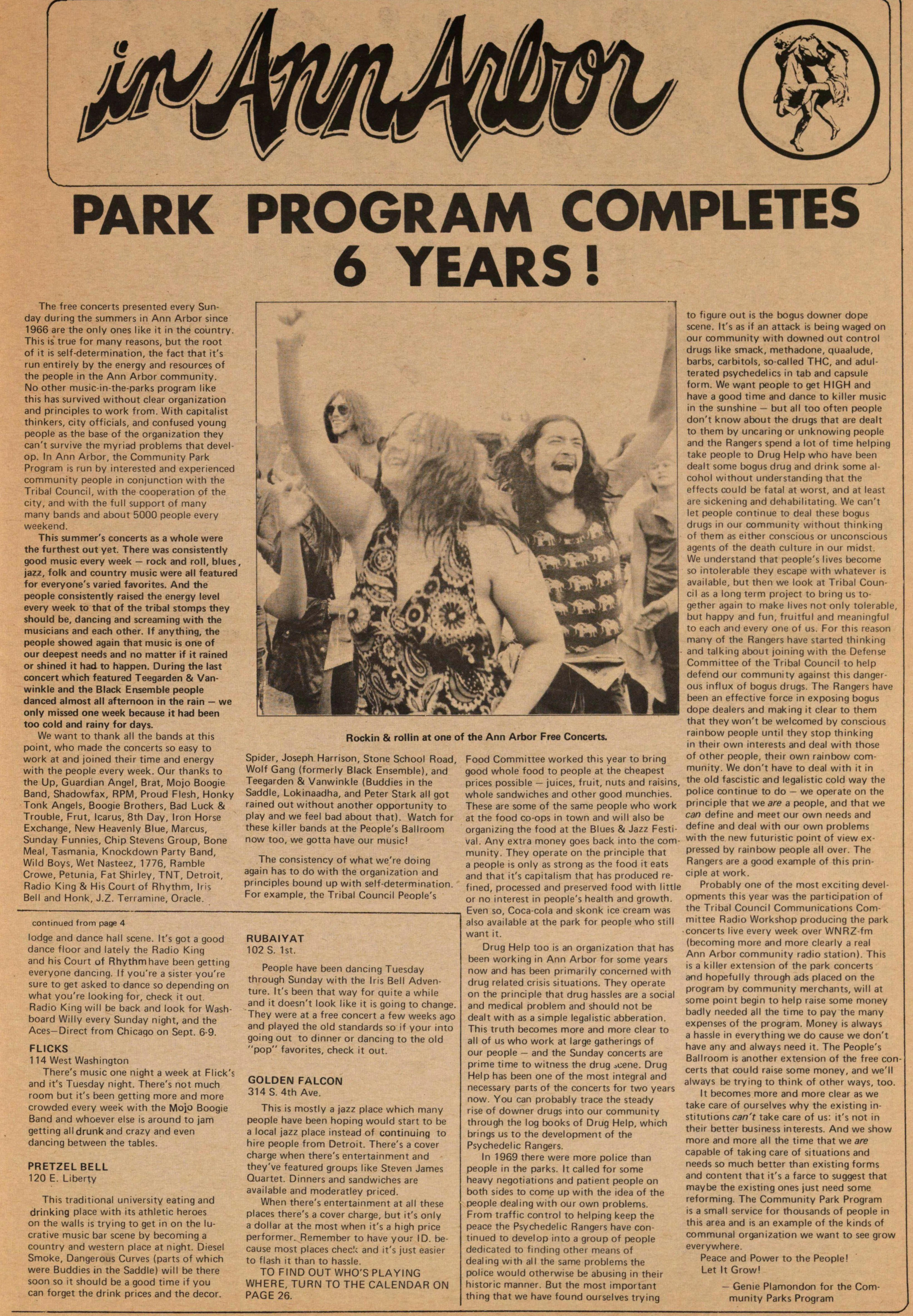 The free concerts presented every Sunday during the summers in Ann Arbor since 1966 are the only ones like it in the country. This is true for many reasons, but the root of it is self-determination, the fact that it's run entirely by the energy and resources of the people in the Ann Arbor community. No other music-in-the-parks program like this has survived without clear organization and principles to work from. With capitalist thinkers, city officials, and confused young people as the base of the organization they can't survive the myriad problems that develop. In Ann Arbor, the Community Park Program is run by interested and experienced community people in conjunction with the Tribal Council, with the cooperation of the city, and with the full support of many many bands and about 5000 people every weekend.

This summer's concerts as a whole were the furthest out yet. There was consistently good music every week – rock and roll, blues jazz, folk and country music were all featured for everyone's varied favorites. And the people consistently raised the energy level every week to that of the tribal stomps they should be, dancing and screaming with the musicians and each other. If anything, the people showed again that music is one of our deepest needs and no matter if it rained or shined it had to happen. During the last concert which featured Teegarden & Vanwinkle and the Black Ensemble people danced almost all afternoon in the rain - we only missed one week because it had been too cold and rainy for days.

We want to thank all the bands at this point, who made the concerts so easy to work at and joined their time and energy with the people every week. Our thanks to the Up, Guardian Angel, Brat, Mojo Boogie Band, Shadowfax, RPM, Proud Flesh, Honky Tonk Angels, Boogie Brothers, Bad Luck & Trouble, Frut, Icarus, 8th Day, Iron Horse Exchange, New Heavenly Blue, Marcus, Sunday Funnies, Chip Stevens Group, Bone Meal, Tasmania, Knockdown Party Band, Wild Boys, Wet Nasteez, 1776, Ramble Crowe, Petunia, Fat Shirley, TNT, Detroit, Radio King & His Court of Rhythm, Iris Bell and Honk, J.Z. Terramine, Oracle Spider, Joseph Harrison, Stone School Road, Wolf Gang (formerly Black Ensemble), and Teegarden & Vanwinkle (Buddies in the Saddle, Lokinaadha, and Peter Stark all got rained out without another opportunity to play and we feel bad about that). Watch for these killer bands at the People's Ballroom now too, we gotta have our music!

The consistency of what we're doing again has to do with the organization and principles bound up with self-determination. For example, the Tribal Council People's Food Committee worked this year to bring good whole food to people at the cheapest prices possible – juices, fruit, nuts and raisins, whole sandwiches and other good munchies. These are some of the same people who work at the food co-ops in town and will also be organizing the food at the Blues & Jazz Festival. Any extra money goes back into the community. They operate on the principle that a people is only as strong as the food it eats and that it's capitalism that has produced refined, processed and preserved food with little or no interest in people's health and growth. Even so, Coca-cola and skonk ice cream was also available at the park for people who still want it.

Drug Help too is an organization that has been working in Ann Arbor for some years now and has been primarily concerned with drug related crisis situations. They operate on the principle that drug hassles are a social and medical problem and should not be dealt with as a simple legalistic abberation. This truth becomes more and more clear to all of us who work at large gatherings of our people – and the Sunday concerts are prime time to witness the drug scene. Drug Help has been one of the most integral and necessary parts of the concerts for two years now. You can probably trace the steady rise of downer drugs into our community through the log books of Drug Help, which brings us to the development of the Psychedelic Rangers.

In 1969 there were more police than people in the parks. It called for some heavy negotiations and patient people on both sides to come up with the idea of the people dealing with our own problems. From traffic control to helping keep the peace the Psychedelic Rangers have continued to develop into a group of people dedicated to finding other means of dealing with all the same problems the police would otherwise be abusing in their historic manner. But the most important thing that we have found ourselves trying to figure out is the bogus downer dope scene. It's as if an attack is being waged on our community with downed out control drugs like smack, methadone, quaalude, barbs, carbitols, so-called THC, and adulterated psychedelics in tab and capsule form. We want people to get HIGH and have a good time and dance to killer music in the sunshine – but all too often people don't know about the drugs that are dealt to them by uncaring or unknowing people and the Rangers spend a lot of time helping take people to Drug Help who have been dealt some bogus drug and drink some alcohol without understanding that the effects could be fatal at worst, and at least are sickening and dehabilitating. We can't let people continue to deal these bogus drugs in our community without thinking of them as either conscious or unconscious agents of the death culture in our midst. We understand that people's lives become so intolerable they escape with whatever is available, but then we look at Tribal Council as a long term project to bring us together again to make lives not only tolerable, but happy and fun, fruitful and meaningful to each and every one of us. For this reason many of the Rangers have started thinking and talking about joining with the Defense Committee of the Tribal Council to help defend our community against this dangerous influx of bogus drugs. The Rangers have been an effective force in exposing bogus dope dealers and making it clear to them that they won't be welcomed by conscious rainbow people until they stop thinking in their own interests and deal with those of other people, their own rainbow community. We don't have to deal with it in the old fascistic and legalistic cold way the police continue to do - we operate on the principle that we are a people, and that we can define and meet our own needs and define and deal with our own problems with the new futuristic point of view expressed by rainbow people all over. The Rangers are a good example of this principle at work.

Probably one of the most exciting developments this year was the participation of the Tribal Council Communications Committee Radio Workshop producing the park concerts live every week over WNRZ-fm (becoming more and more clearly a real Ann Arbor community radio station). This is a killer extension of the park concerts and hopefully through ads placed on the program by community merchants, will at some point begin to help raise some money badly needed all the time to pay the many expenses of the program. Money is always a hassle in everything we do cause we don't have any and always need it. The People's Ballroom is another extension of the free concerts that could raise some money, and we'll always be trying to think of other ways, too.

It becomes more and more clear as we take care of ourselves why the existing institutions can't take care of us: it's not in their better business interests. And we show more and more all the time that we are capable of taking care of situations and needs so much better than existing forms and content that it's a farce to suggest that maybe the existing ones just need some reforming. The Community Park Program is a small service for thousands of people in this area and is an example of the kinds of communal organization we want to see grow everywhere.

Peace and Power to the People!