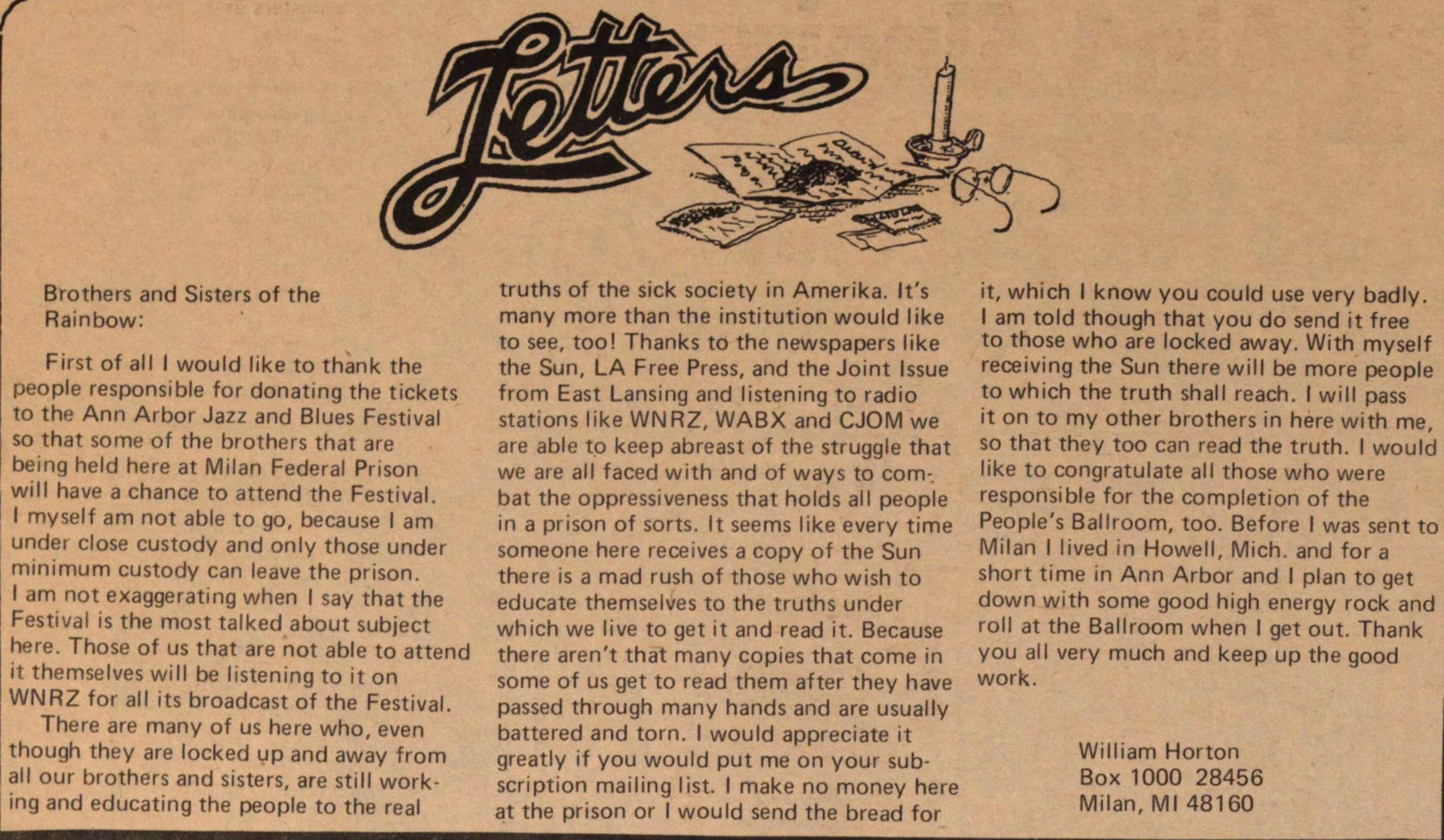 Brothers and Sisters of the Rainbow:

First of all I would like to thank the people responsible for donating the tickets to the Ann Arbor Jazz and Blues Festival so that some of the brothers that are being held here at Milan Federal Prison will have a chance to attend the Festival. I myself am not able to go, because I am under close custody and only those under minimum custody can leave the prison. I am not exaggerating when I say that the Festival is the most talked about subject here. Those of us that are not able to attend it themselves will be listening to it on WNRZ for all its broadcast of the Festival.

There are many of us here who, even though they are locked up and away from all our brothers and sisters, are still working and educating the people to the real truths of the sick society in Amerika. It's many more than the institution would like to see, too! Thanks to the newspapers like the Sun, LA Free Press, and the Joint Issue from East Lansing and listening to radio stations like WNRZ, WABX and CJOM we are able to keep abreast of the struggle that we are all faced with and of ways to combat the oppressiveness that holds all people in a prison of sorts. It seems like every time someone here receives a copy of the Sun there is a mad rush of those who wish to educate themselves to the truths under which we live to get it and read it. Because there aren't that many copies that come in some of us get to read them after they have passed through many hands and are usually battered and torn. I would appreciate it greatly if you would put me on your subscription mailing list. I make no money here at the prison or I would send the bread for it, which I know you could use very badly. I am told though that you do send it free to those who are locked away. With myself receiving the Sun there will be more people to which the truth shall reach. I will pass it on to my other brothers in here with me, so that they too can read the truth. I would like to congratulate all those who were responsible for the completion of the People's Ballroom, too. Before I was sent to Milan I lived in Howell, Mich. and for a short time in Ann Arbor and I plan to get down with some good high energy rock and roll at the Ballroom when I get out. Thank you all very much and keep up the good work.