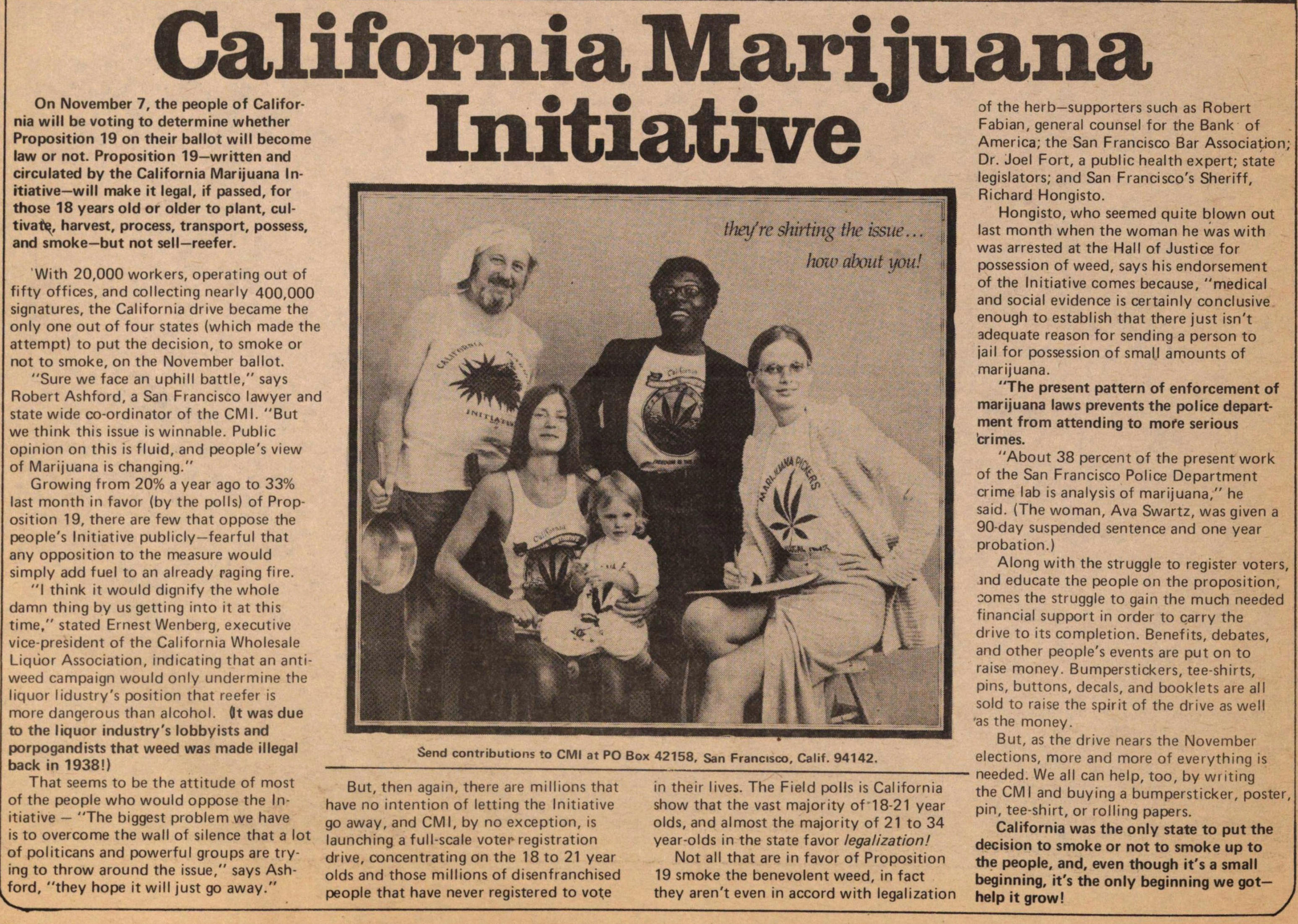 On November 7, the people of California will be voting to determine whether Proposition 19 on their ballot will become law or not. Proposition 19-written and circulated by the California Marijuana Initiative- will make it legal, if passed, for those 18 years old or older to plant, cultiva t, harvest, process, transport, possess, and smoke- but not sel I- reef er. 'With 20,000 workers, operating out of fifty offices, and collecting nearly 400,000 signatures, the California drive became the only one out of four states (which made the attempt) to put the decisión, to smoke or not to smoke, on the November ballot. "Sure we face an uphill battle," says Robert Ashford, a San Francisco lawyer and state wide co-ordinator of the CMI. "But we think this issue is winnable. Public opinión on this is fluid, and people's view of Marijuana is changing." Growing from 20% a year ago to 33% last month in favor (by the polls) of Proposition 19, there are few that oppose the people's Initiative publicly- fearful that any opposition to the measure would simply add fuel to an already raging fire. "I think it would dignify the whole damn thing by us getting into it at this time," stated Ernest Wenberg, executive vice-president of the California Wholesale Liqúor Association, indicating that an antiweed campaign would only undermine the liquor lidustry's position that reefer is more dangerous than alcohol. Ot was due to the liquor industry's lobby ists and porpogandists that weed was made illegal back in 1938!) That seems to be the attitude of most of the people who would oppose the Initiative - "The biggest problem we have is to overeóme the wall of silence that a lot of politicans and powerful groups are trying to throw around the issue," says Ashford, "they hope it will just go away." V __ But, then again, there are millions that have no intention of letting the Initiative go away, and CMI, by no exception, is launching a fullscale voter registration drive, concentrating on the 18 to 21 year olds and those millions of disenfranchised people that have never registered to vote n their Mves. The Field polls is California show that the vast major ity of 18-21 year olds, and almost the majority of 21 to 34 year-olds in the state favor legalization! Not all that are in favor of Proposition 19 smoke the benevolent weed, in fact they aren't even in accord with legalization of the herb- supporters such as Robert Fabián, general counsel for the Bank of America; the San Francisco Bar Association; Dr. Joel Fort, a public health expert; state legislators; and San Francisco's Sheriff, Richard Hongisto. Hongisto, who seemed quite blown out last month when the woman he was with was arrested at the Hall of Justice for possession of weed, says his endorsement of the Initiative comes because, "medical and social evidence is certainly conclusive enough to establish that there just isn't adequate reason for sending a person to jail for possession of small amounts of marijuana. "The present pattern of enforcement of marijuana laws prevents the pólice department from attending to more serious 'crimes. "About 38 percent of the present work of the San Francisco Pólice Department crime lab is analysis of marijuana," he said. (The woman, Ava Swartz, was given a 90-day suspended sentence and one year probation.) Along with the struggle to register voters, md edúcate the people on the proposition, comes the struggle to gain the much needed financial support in order to carry the drive to its completion. Benefits, debates, and other people's events are put on to raise money. Bumperstickers, tee-shirts, pins, buttons, decals, and booklets are all sold to raise the spirit of the drive as well 'as the money. But, as the drive nears the November elections, more and more of everything is needed. We all can help, too, by writing the CMI and buying a bumpersticker, poster, pin, tee-shirt, or rolling papers. California was the only state to put the decisión to smoke or not to smoke up to the people, and, even though it's a small beginning, it's the only beginning we got- helpitgrow! J