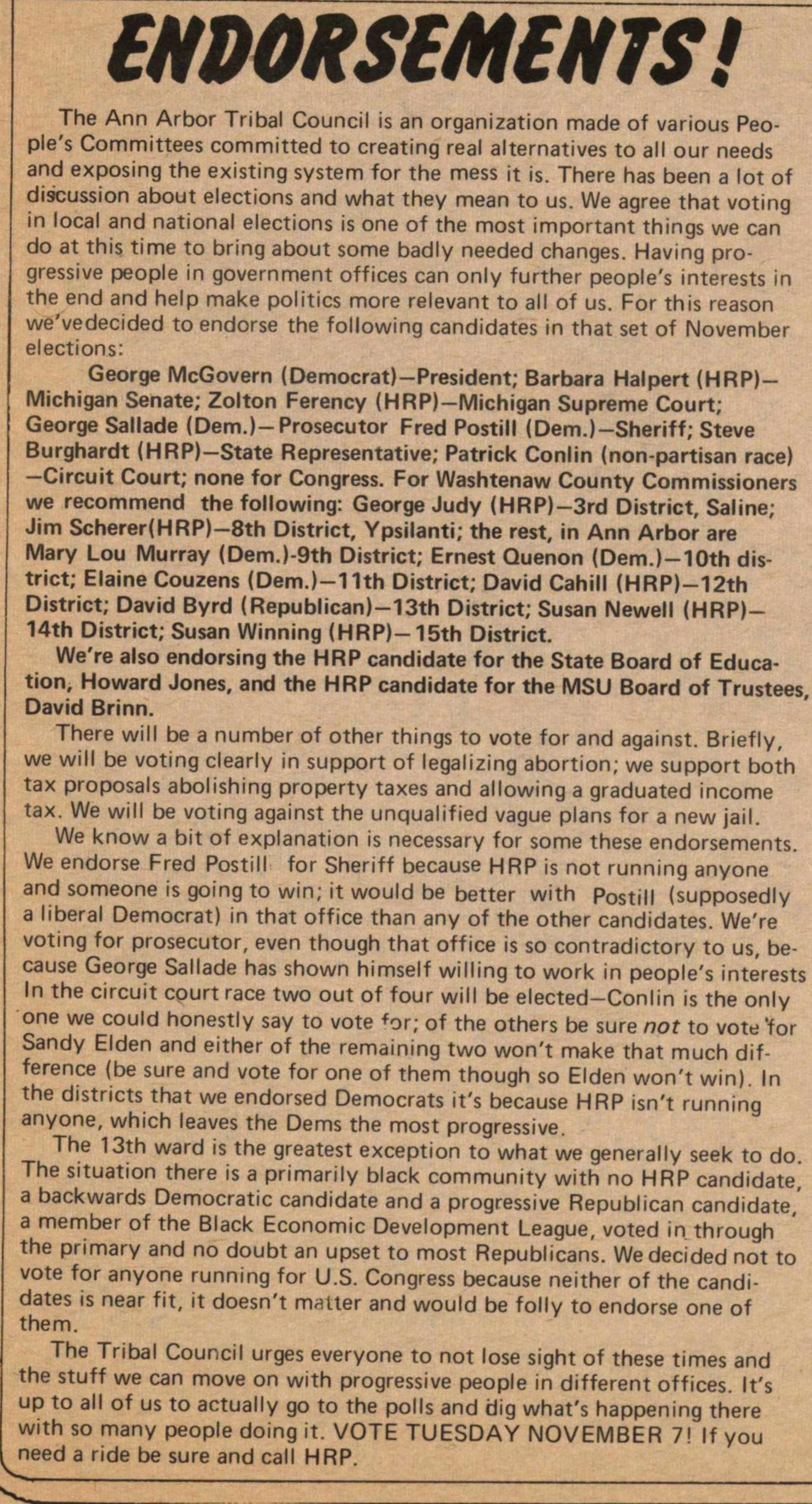 The Ann Arbor Tribal Council is an organization made of various People's Committees committed to creating real alternatives to all our needs and exposing the existing system for the mess t is. There has been a lot of disicussion about elections and what they mean to us. We agree that voting in local and national elections is one of the most important things we can do at this time to bring about some badly needed changes. Having progressive people in government offices can only further people's interests in the end and help make politics more relevant to all of us. For this reason we'vedecided to endorse the following candidates in that set of November elections: George McGovern (Democrat)-President; Barbara Halpert (HRP)Michigan Senate; Zolton Ferency (HRP)-Michigan Supreme Court; George Sallade (Dem.)-Prosecutor Fred Postill (Dem.) -Sheriff; Steve Burghardt (HRP)-State Representative; Patrick Conlin (non-partisan race) -Circuit Court; none for Congress. For Washtenaw County Commissioners we recommend the following: George Judy (HRP)-3rd District, Saline; Jim Scherer(HRP)-8th District, Ypsilanti; the rest, in Ann Arbor are Mary Lou Murray (Dem.)-9th District; Ernest Quenon (Dem.)-IOth district; Elaine Couzens (Dem.)-11th District; David Cahill (HRP)-12th District; David Byrd (Republican)-13th District; Susan Newell (HRP)14th District; Susan Winning (HRP)-15th District. We're also endorsing the HRP candidate for the State Board of Education, Howard Jones, and the HRP candidate for the MSU Board of Trustees, David Brinn. There will be a number of other things to vote for and against. Briefly, we will be voting clearly in support of legalizing abortion; we support both tax proposals abolishing property taxes and allowing a graduated income tax. We will be voting against the unqualified vague plans for a new jail. We know a bit of explanation is necessary for some these endorsements. We endorse Fred Postill for Sheriff because HRP is not running anyone and someone is going to win; it would be better with Postill (supposedly a liberal Democrat) in that office than any of the other candidates. We're voting for prosecutor, even though that office is so contradictory to us, because George Sallade has shown himself willing to work n people's interests In the circuit court race two out of four will be elected-Conlin is the only one we could honestly say to vote or; of the others be sure not to vote "for Sandy Elden and either of the remaining two won't make that much difference (be sure and vote for one of them though so Elden won't win). In the districts that we endorsed Democrats it's because HRP isn't running anyone, which leaves the Dems the most progressive. The 13th ward is the greatest exception to what we generally seek to do. The situation there is a primarily black community with no HRP candidate a backwards Democratie candidate and a progressive Republican candidate, a member of the Black Economie Development League, voted in through the primary and no doubt an upset to most Republican's. Wedecided not to vote for anyone running for U.S. Congress because neither of the candidates is near fit, it doesn't matter and would be folly to endorse one of them. The Tribal Council urges everyone to not lose sight of these times and the stuff we can move on with progressive people in different offices. It's up to all of us to actually go to the polls and tiig what's happening there with so many people doing it. VOTE TUESDAY NOVEMBER 7! If you need a ride be sure and cali HRP. s