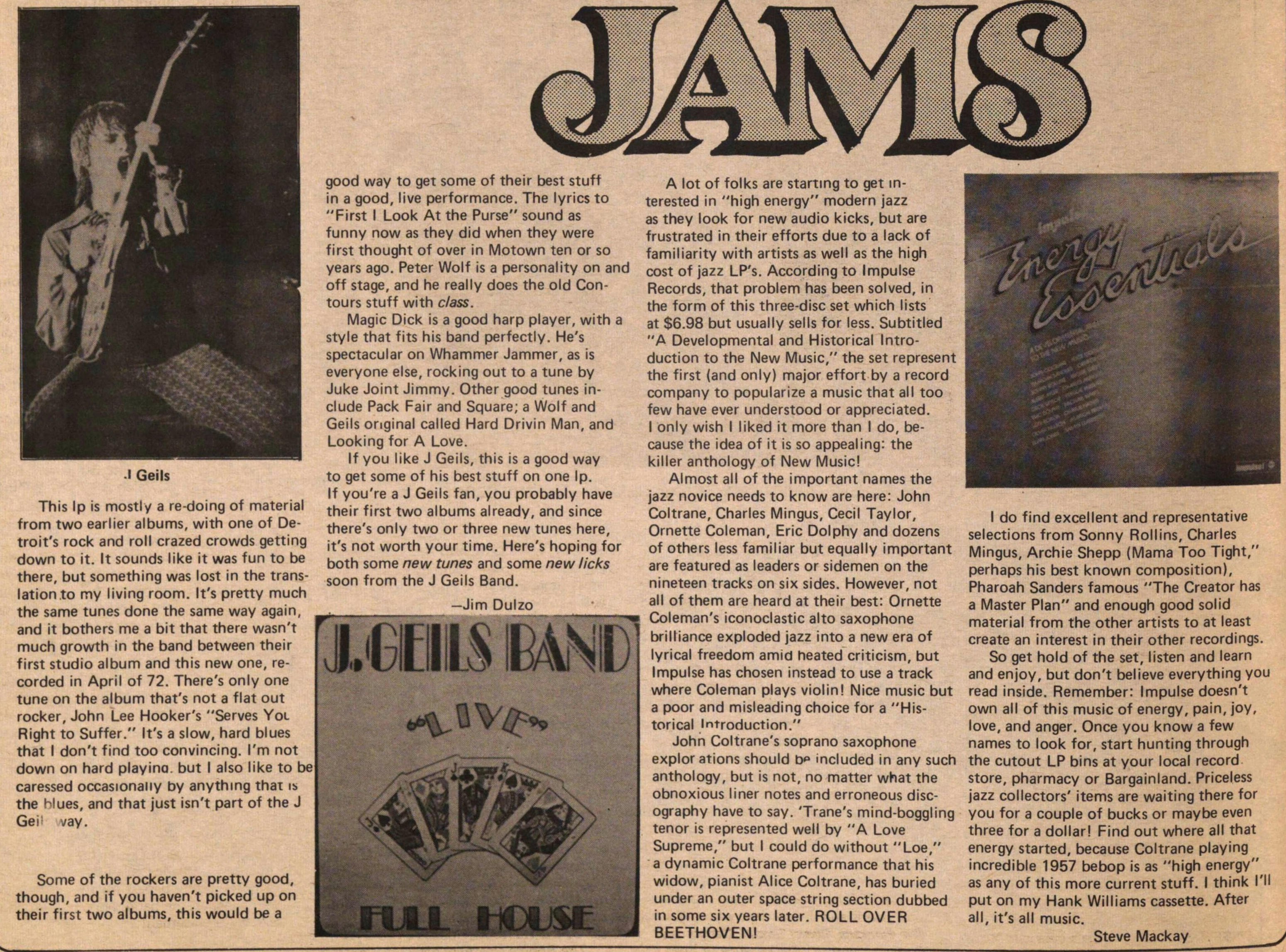 This lp is mostly a re-doing of material from two earlier albums, with one of Detroit's rock and roll crazed crowds getting down to it. It sounds like it was fun to be there, but something was lost in the translation to my living room. It's pretty much the same tunes done the same way again, and it bothers me a bit that there wasn't much growth in the band between their first studio album and this new one, recorded in April of 72. There's only one tune on the album that's not a flat out rocker, John Lee Hooker's "Serves You Right to Suffer." It's a slow, hard blues that I don't find too convincing. l'm not down on hard playing, but I also like to be caressed occasionally by anything that is the blues, and that just isn't part of the J Geils way.

Some of the rockers are pretty good, though, and if you haven't picked up on their first two albums, this would be a good way to get some of their best stuff in a good, live performance. The lyrics to "First I Look At the Purse" sound as funny now as they did when they were first thought of over in Motown ten or so years ago. Peter Wolf is a personality on and off stage, and he really does the old Contours stuff with class.

Magic Dick is a good harp player, with a style that fits his band perfectly. He's spectacular on Whammer Jammer, as is everyone else, rocking out to a tune by Juke Joint Jimmy. Other good tunes include Pack Fair and Square; a Wolf and Geils original called Hard Drivin Man, and Looking for A Love.

If you like J Geils, this is a good way to get some of his best stuff on one lp. If you're a J Geils fan, you probably have their first two albums already, and since there's only two or three new tunes here, it's not worth your time. Here's hoping for both some new tunes and some new licks soon from the J Geils Band.

A lot of folks are starting to get interested in "high energy" modern jazz as they look for new audio kicks, but are frustrated in their efforts due to a lack of familiarity with artists as well as the high cost of jazz LP's. According to Impulse Records, that problem has been solved, in the form of this three-disc set which lists at $6.98 but usually sells for less. Subtitled "A Developmental and Historical Introduction to the New Music," the set represents the first (and only) major effort by a record company to popularize a music that all too few have ever understood or appreciated. I only wish I liked it more than I do, because the idea of it is so appealing: the killer anthology of New Music!

Almost all of the important names the jazz novice needs to know are here: John Coltrane, Charles Mingus, Cecil Taylor, Ornette Coleman, Eric Dolphy and dozens of others less familiar but equally important are featured as leaders or sidemen on the nineteen tracks on six sides. However, not all of them are heard at their best: Ornette Coleman's iconoclastic alto saxophone brilliance exploded jazz into a new era of lyrical freedom amid heated criticism, but Impulse has chosen instead to use a track where Coleman plays violin! Nice music but a poor and misleading choice for a "Historical Introduction."

John Coltrane's soprano saxophone explorations should be included in any such anthology, but is not, no matter what the obnoxious liner notes and erroneous discography have to say. 'Trane's mind-boggling tenor is represented well by "A Love Supreme," but I could do without "Loe," a dynamic Coltrane performance that his widow, pianist Alice Coltrane, has buried under an outer space string section dubbed in some six years later. ROLL OVER BEETHOVEN!

I do find excellent and representative selections from Sonny Rollins, Charles Mingus, Archie Shepp ("Mama Too Tight," perhaps his best known composition), Pharoah Sanders famous "The Creator has a Master Plan" and enough good solid material from the other artists to at least create an interest in their other recordings.

So get hold of the set, listen and learn and enjoy, but don't believe everything you read inside. Remember: Impulse doesn't own all of this music of energy, pain, joy, love, and anger. Once you know a few names to look for, start hunting through the cutout LP bins at your local record store, pharmacy or Bargainland. Priceless jazz collectors' items are waiting there for you for a couple of bucks or maybe even three for a dollar! Find out where all that energy started, because Coltrane playing incredible 1957 bebop is as "high energy" as any of this more current stuff. I think I'll put on my Hank Williams cassette. After all, it's all music.