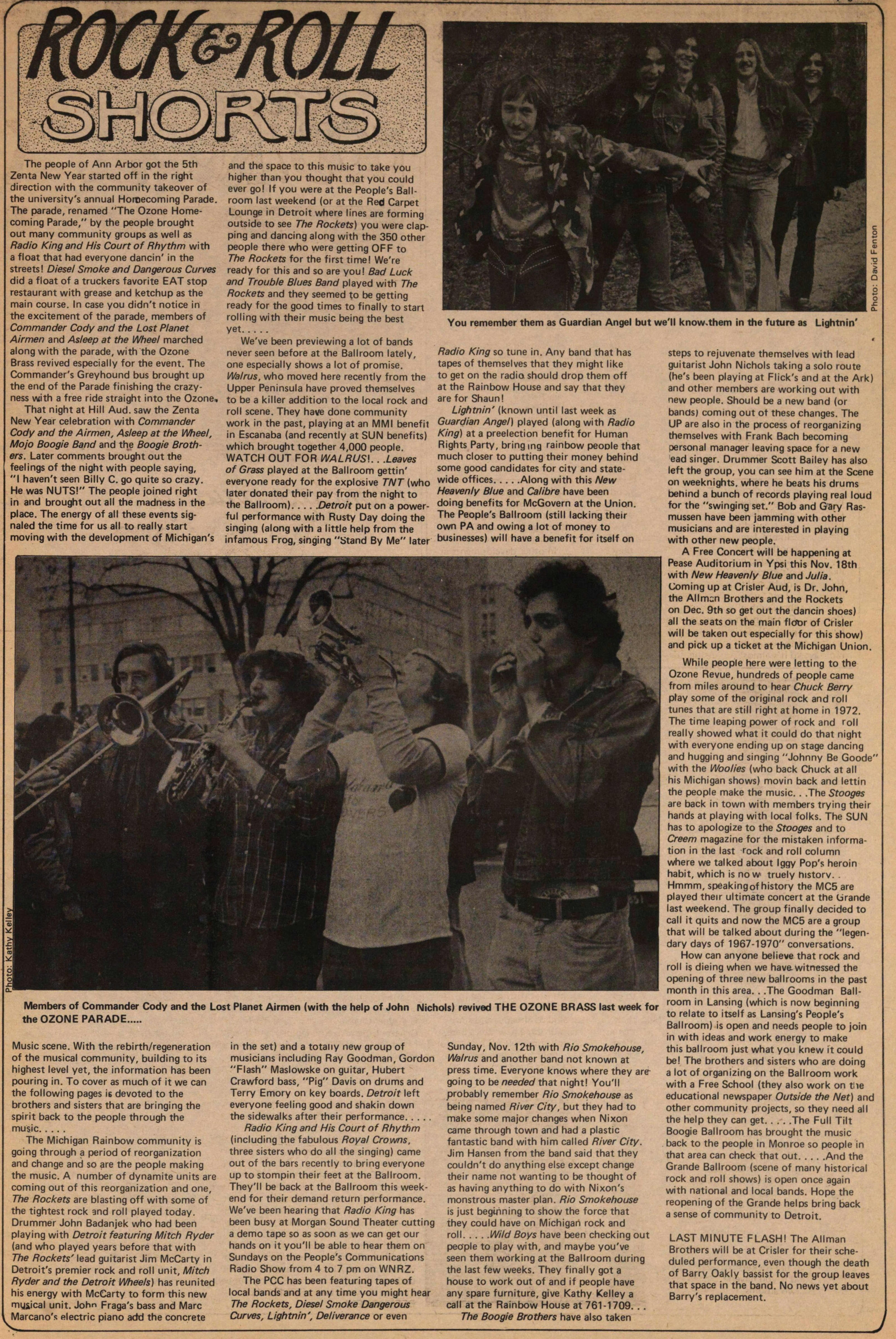 The people of Ann Arbor got the 5th Zenta New Year started off in the right direction with the community takeover of the university's annual Homecoming Parade. The parade, renamed "The Ozone Homecoming Parade," by the people brought out many community groups as well as Radio King and His Court of Rhythm with a float that had everyone dancin' in the streets! Diesel Smoke and Dangerous Curves did a float of a truckers favorite EAT stop restaurant with grease and ketchup as the main course. In case you didn't notice in the excitement of the parade, members of Commander Cody and the Lost Planet Airmen and Asleep at the Wheel marched along with the parade, with the Ozone Brass revived especially for the event. The Commander's Greyhound bus brought up the end of the Parade finishing the crazyness with a free ride straight into the Ozone.

That night at Hill Aud. saw the Zenta New Year celebration with Commander Cody and the Airmen, Asleep at the Wheel, Mojo Boogie Band and the Boogie Brothers. Later comments brought out the feelings of the night with people saying, "I haven't seen Billy C. go quite so crazy. He was NUTS!" The people joined right in and brought out all the madness in the place. The energy of all these events signaled the time for us all to really start moving with the development of Michigan's Music scene. With the rebirth/regeneration of the musical community, building to its highest level yet, the information has been pouring in. To cover as much of it as we can, the following pages are devoted to the brothers and sisters that are bringing the spirit back to the people through the music...

The Michigan Rainbow community is going through a period of reorganization and change and so are the people making the music. A number of dynamite units are coming out of this reorganization and one, The Rockets are blasting off with some of the tightest rock and roll played today. Drummer John Badanjek who had been playing with Detroit featuring Mitch Ryder (and who played years before that with The Rockets' lead guitarist Jim McCarty in Detroit's premier rock and roll unit, Mitch Ryder and the Detroit Wheels) has reunited his energy with McCarty to form this new musical unit. John Fraga's bass and Mare Marcano's electric piano add the concrete and the space to this music to take you higher than you thought that you could ever go! If you were at the People's Ballroom last weekend (or at the Red Carpet Lounge in Detroit where lines are forming outside to see The Rockets) you were clapping and dancing along with the 350 other people there who were getting OFF to The Rockets for the first time! We're ready for this and so are you! Bad Luck and Trouble Blues Band played with The Rockets and they seemed to be getting ready for the good times to finally to start rolling with their music being the best yet...

We've been previewing a lot of bands never seen before at the Ballroom lately, one especially shows a lot of promise. Walrus, who moved here recently from the Upper Peninsula have proved themselves to be a killer addition to the local rock and roll scene. They have done community work in the past, playing at an MMI benefit in Escanaba (and recently at SUN benefits) which brought together 4,000 people WATCH OUT FOR WALRUS!....Leaves of Grass played at the Ballroom gettin' everyone ready for the explosive TNT (who later donated their pay from the night to the Ballroom)... Detroit put on a powerful performance with Rusty Day doing the singing (along with a little help from the infamous Frog, singing "Stand By Me" later in the set) and a totally new group of musicians including Ray Goodman, Gordon "Flash" Maslowske on guitar, Hubert Crawford bass, "Pig" Davis on drums and Terry Emory on key boards. Detroit left everyone feeling good and shakin down the sidewalks after their performance...

Radio King and His Court of Rhythm (including the fabulous Royal Crowns, three sisters who do all the singing) came out of the bars recently to bring everyone up to stompin their feet at the Ballroom. They'll be back at the Ballroom this weekend for their demand return performance. We've been hearing that Radio King has been busy at Morgan Sound Theater cutting a demo tape so as soon as we can get our hands on it you'll be able to hear them on Sundays on the People's Communications Radio Show from 4 to 7 pm on WNRZ.

The PCC has been featuring tapes of local bands and at any time you might hear The Rockets, Diesel Smoke Dangerous Curves, Lightnin', Deliverance or even Radio King so tune in. Any band that has tapes of themselves that they might like to get on the radio should drop them off at the Rainbow House and say that they are for Shaun!

Lightnin' (known until last week as Guardian Angel) played (along with Radio King) at a pre-election benefit for Human Rights Party, bringing rainbow people that much closer to putting their money behind some good candidates for city and statewide offices... Along with this New Heavenly Blue and Calibre have been doing benefits for McGovern at the Union. The People's Ballroom (still lacking their own PA and owing a lot of money to businesses) will have a benefit for itself on Sunday, Nov. 12th with Rio Smokehouse, Walrus and another band not known at press time. Everyone knows where they are going to be needed that night! You'll probably remember Rio Smokehouse as being named River City, but they had to make some major changes when Nixon came through town and had a plastic fantastic band with him called River City. Jim Hansen from the band said that they couldn't do anything else except change their name not wanting to be thought of as having anything to do with Nixon's monstrous master plan. Rio Smokehouse is just beginning to show the force that they could have on Michigan rock and roll... Wild Boys have been checking out people to play with, and maybe you've seen them working at the Ballroom during the last few weeks. They finally got a house to work out of and if people have any spare furniture, give Kathy Kelley a call at the Rainbow House at 761-1709...

The Boogie Brothers have also taken steps to rejuvenate themselves with lead guitarist John Nichols taking a solo route (he's been playing at Flick's and at the Ark) and other members are working out with new people. Should be a new band (or bands) coming out of these changes. The UP are also in the process of reorganizing themselves with Frank Bach becoming personal manager leaving space for a new lead singer. Drummer Scott Bailey has also left the group, you can see him at the Scene on weeknights, where he beats his drums behind a bunch of records playing real loud for the "swinging set." Bob and Gary Rasmussen have been jamming with other musicians and are interested in playing with other new people.

A Free Concert will be happening at Pease Auditorium in Ypsi this Nov. 18th with New Heavenly Blue and Julia. Coming up at Crisler Aud, is Dr. John, the Allman Brothers and the Rockets on Dec. 9th so get out the dancin shoes) all the seats on the main floor of Crisler will be taken out especially for this show) and pick up a ticket at the Michigan Union.

While people here were letting to the Ozone Revue, hundreds of people came from miles around to hear Chuck Berry play some of the original rock and roll tunes that are still right at home in 1972. The time leaping power of rock and roll really showed what it could do that night with everyone ending up on stage dancing and hugging and singing "Johnny Be Goode" with the Woolies (who back Chuck at all his Michigan shows) movin back and lettin the people make the music. . .The Stooges are back in town with members trying their hands at playing with local folks. The SUN has to apologize to the Stooges and to Creem magazine for the mistaken information in the last rock and roll column where we talked about Iggy Pop's heroin habit, which is now truly history...Hmmm, speaking of history the MC5 are played their ultimate concert at the Grande last weekend. The group finally decided to call it quits and now the MC5 are a group that will be talked about during the "legendary days of 1967-1970" conversations.

How can anyone believe that rock and roll is dieing when we have witnessed the opening of three new ballrooms in the past month in this area. . .The Goodman Ballroom in Lansing (which is now beginning to relate to itself as Lansing's People's Ballroom) is open and needs people to join in with ideas and work energy to make this ballroom just what you knew it could be! The brothers and sisters who are doing a lot of organizing on the Ballroom work with a Free School (they also work on the educational newspaper Outside the Net) and other community projects, so they need all the help they can get ...The Full Tilt Boogie Ballroom has brought the music back to the people in Monroe so people in that area can check that out... And the Grande Ballroom (scene of many historical rock and roll shows) is open once again with national and local bands. Hope the reopening of the Grande helps bring back a sense of community to Detroit.

LAST MINUTE FLASH! The Allman Brothers will be at Crisler for their scheduled performance, even though the death of Barry Oakly bassist for the group leaves that space in the band. No news yet about Barry's replacement.

Members of Commander Cody and the Lost Planet Airmen (with the help of John Nichols) revived THE OZONE BRASS last week for the OZONE PARADE....