Prison Policy--'constitutional Rights' Are A Joke! 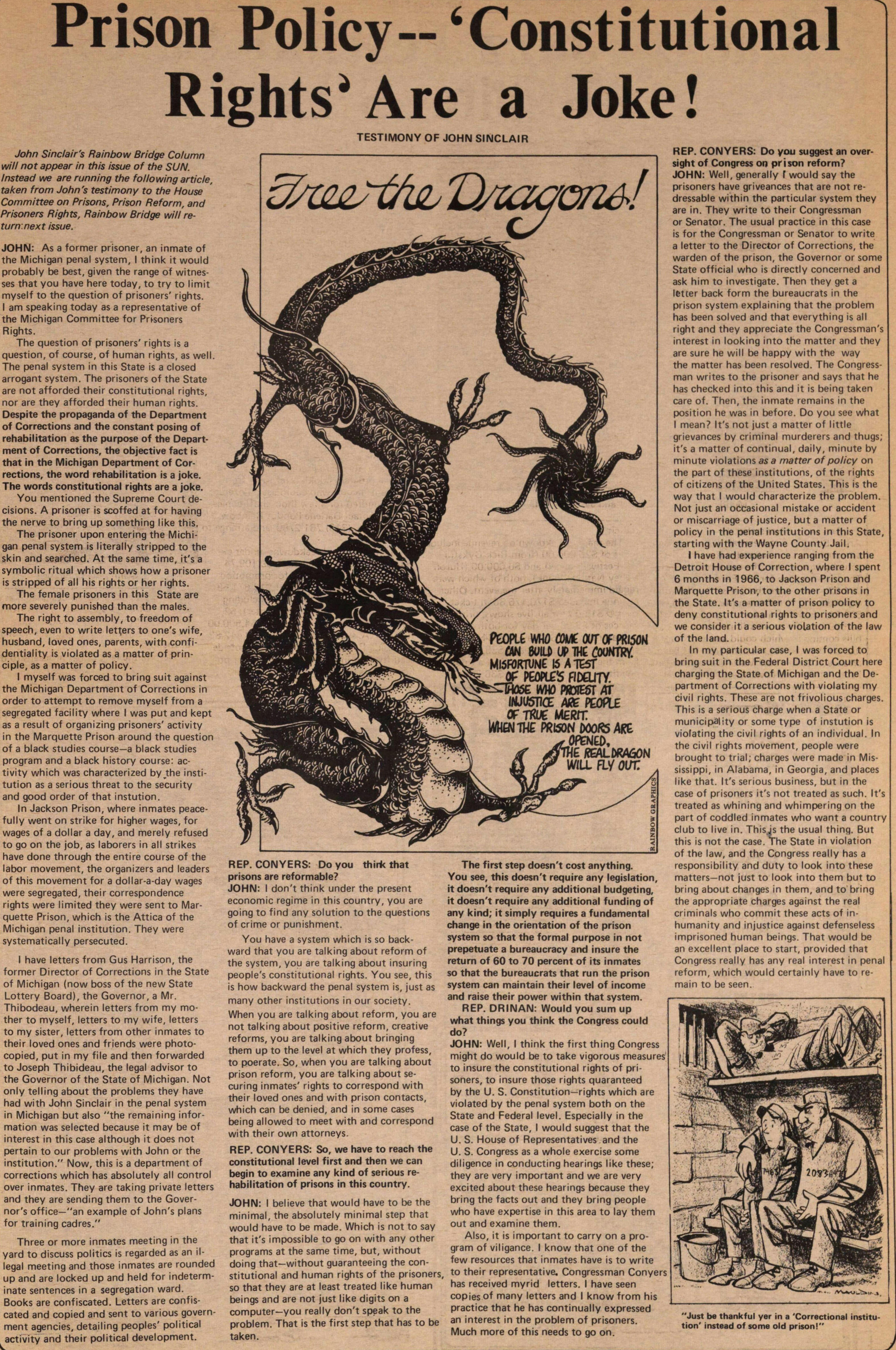 Prison Policy--'Constitutional Rights' Are a Joke!

John Sinclair's Rainbow Bridge Column will not appear in this issue of the SUN. Instead we are running the following article, taken from John's testimony to the House Committee on Prisons, Prison Reform, and Prisoners Rights, Rainbow Bridge will return.next issue.

JOHN: As a former prisoner, an inmate of the Michigan penal system, I think it would probably be best, given the range of witnesses that you have here today, to try to limit myself to the question of prisoners' rights. I am speaking today as a representative of the Michigan Committee for Prisoners Rights.

You mentioned the Supreme Court decisions. A prisoner is scoffed at for having the nerve to bring up something like this.

The prisoner upon entering the Michigan penal system is literally stripped to the skin and searched. At the same time, it's a symbolic ritual which shows how a prisoner is stripped of all his rights or her rights.

The female prisoners in this State are more severely punished than the males.

The right to assembly, to freedom of speech, even to write letters to one's wife, husband, loved ones, parents, with confidentiality is violated as a matter of principle, as a matter of policy.

I myself was forced to bring suit against the Michigan Department of Corrections in order to attempt to remove myself from a segregated facility where I was put and kept as a result of organizing prisoners' activity in the Marquette Prison around the question of a black studies course- a black studies program and a black history course: activity which was characterized by the institution as a serious threat to the security and good order of that institution.

In Jackson Prison, where inmates peacefully went on strike for higher wages, for wages of a dollar a day, and merely refused to go on the job, as laborers in all strikes have done through the entire course of the labor movement, the organizers and leaders of this movement for a dollar-a-day wages were segregated, their correspondence rights were limited they were sent to Marquette Prison, which is the Attica of the Michigan penal institution. They were systematically persecuted.

I have letters from Gus Harrison, the former Director of Corrections in the State of Michigan (now boss of the new State Lottery Board), the Governor, a Mr. Thibodeau, wherein letters from my mother to myself, letters to my wife, letters to my sister, letters from other inmates to their loved ones and friends were photocopied, put in my file and then forwarded to Joseph Thibideau, the legal advisor to the Governor of the State of Michigan. Not only telling about the problems they have had with John Sinclair in the penal system in Michigan but also "the remaining information was selected because it may be of interest in this case although it does not pertain to our problems with John or the institution." Now, this is a department of corrections which has absolutely all control over inmates. They are taking private letters and they are sending them to the Governor's office- "an example of John's plans for training cadres."

Three or more inmates meeting in the yard to discuss politics is regarded as an illegal meeting and those inmates are rounded up and are locked up and held for indeterminate sentences in a segregation ward. Books are confiscated. Letters are confiscated and copied and sent to various government agencies, detailing peoples' political activity and their political development.

REP. CONYERS: Do you think that prisons are reformable?

JOHN: I don't think under the present economic regime in this country, you are going to find any solution to the questions of crime or punishment.

REP. CONYERS: So, we have to reach the constitutional level first and then we can begin to examine any kind of serious rehabilitation of prisons in this country.

JOHN: I believe that would have to be the minimal, the absolutely minimal step that would have to be made. Which is not to say that it's impossible to go on with any other programs at the same time, but, without doing that-without guaranteeing the constitutional and human rights of the prisoners, so that they are at least treated like human beings and are not just like digits on a computer- you really don't speak to the problem. That is the first step that has to be taken.

REP. DRINAN: Would you sum up what things you think the Congress could do?

JOHN: Well, I think the first thing Congress might do would be to take vigorous measures to insure the constitutional rights of prisoners, to insure those rights guaranteed by the U. S. Constitution- rights which are violated by the penal system both on the State and Federal level. Especially in the case of the State, I would suggest that the U.S. House of Representatives and the U.S. Congress as a whole exercise some diligence in conducting hearings like these; they are very important and we are very excited about these hearings because they bring the facts out and they bring people who have expertise in this area to lay them out and examine them.

Also, it is important to carry on a program of vigilance. I know that one of the few resources that inmates have is to write to their representative. Congressman Conyers has received myriad letters. I have seen copies of many letters and I know from his practice that he has continually expressed an interest in the problem of prisoners. Much more of this needs to go on.

REP. CONYERS: Do you suggest an oversight of Congress on prison reform?

JOHN: Well, generally I would say the prisoners have grievances that are not re-dressable within the particular system they are in. They write to their Congressman or Senator. The usual practice in this case is for the Congressman or Senator to write a letter to the Director of Corrections, the warden of the prison, the Governor or some State official who is directly concerned and ask him to investigate. Then they get a letter back from the bureaucrats in the prison system explaining that the problem has been solved and that everything is all right and they appreciate the Congressman's interest in looking into the matter and they are sure he will be happy with the way the matter has been resolved. The Congressman writes to the prisoner and says that he has checked into this and it is being taken care of. Then, the inmate remains in the position he was in before. Do you see what I mean? It's not just a matter of little grievances by criminal murderers and thugs; it's a matter of continual, daily, minute by minute violations as a matter of policy on the part of these institutions, of the rights of citizens of the United States. This is the way that I would characterize the problem. Not just an occasional mistake or accident or miscarriage of justice, but a matter of policy in the penal institutions in this State, starting with the Wayne County Jail.

I have had experience ranging from the Detroit House of Correction, where I spent 6 months in 1966, to Jackson Prison and Marquette Prison, to the other prisons in the State. It's a matter of prison policy to deny constitutional rights to prisoners and we consider it a serious violation of the law of the land.

In my particular case, I was forced to bring suit in the Federal District Court here charging the State of Michigan and the Department of Corrections with violating my civil rights. These are not frivolous charges. This is a serious charge when a State or municipality or some type of institution is violating the civil rights of an individual. In the civil rights movement, people were brought to trial; charges were made in Mississippi, in Alabama, in Georgia, and places like that. It's serious business, but in the case of prisoners it's not treated as such. It's treated as whining and whimpering on the part of coddled inmates who want a country club to live in. This is the usual thing. But this is not the case. The State in violation of the law, and the Congress really has a responsibility and duty to look into these matters- not just to look into them but to bring about changes in them, and to bring the appropriate charges against the real criminals who commit these acts of inhumanity and injustice against defenseless imprisoned human beings. That would be an excellent place to start, provided that Congress really has any real interest in penal reform, which would certainly have to remain to be seen.

People who come out of prison can build up the country.  Misfortune is a test of people's fidelity.  Those who protest at injustice are people of true merit.  When the prison doors are opened, the real dragon will fly out.