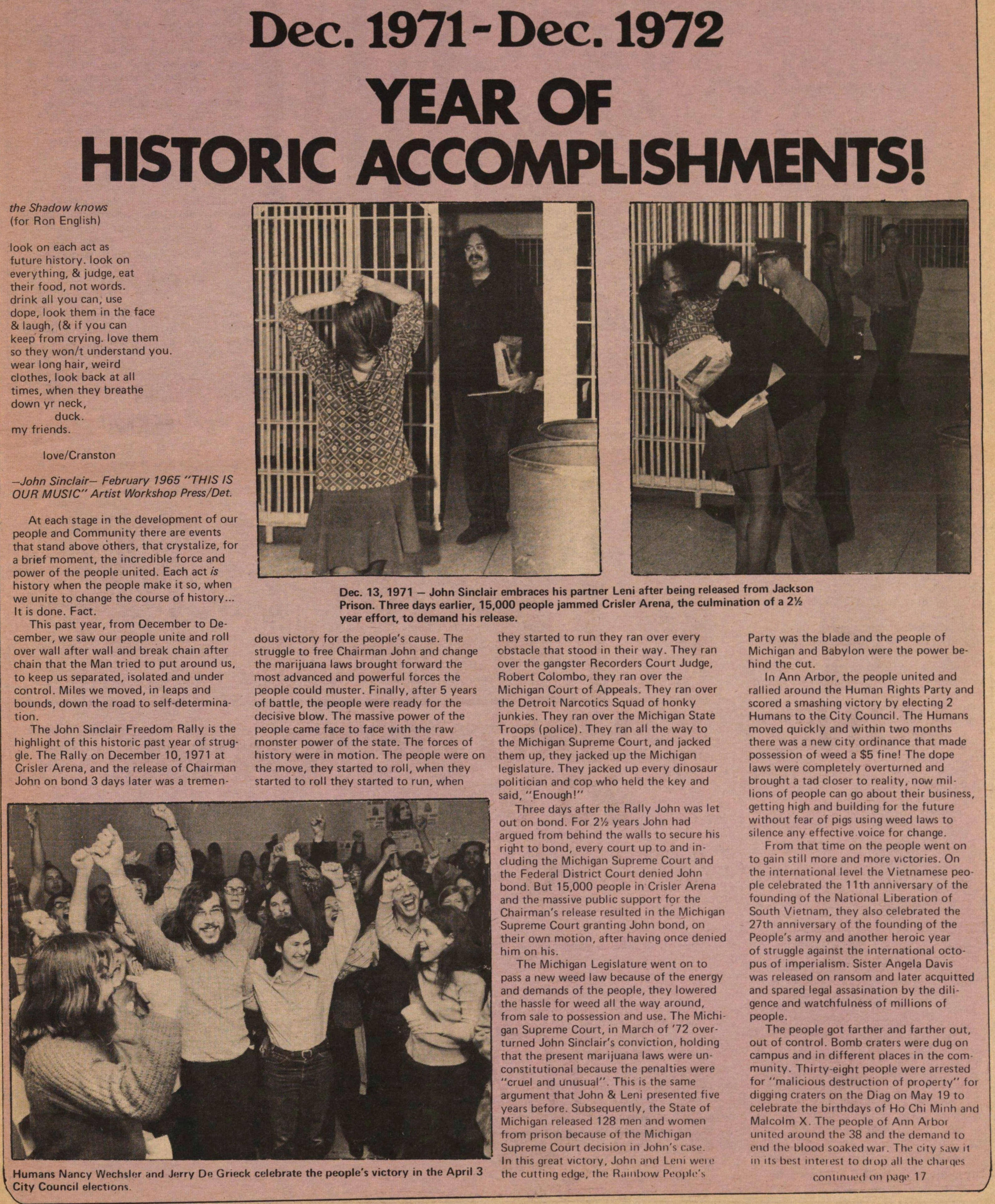 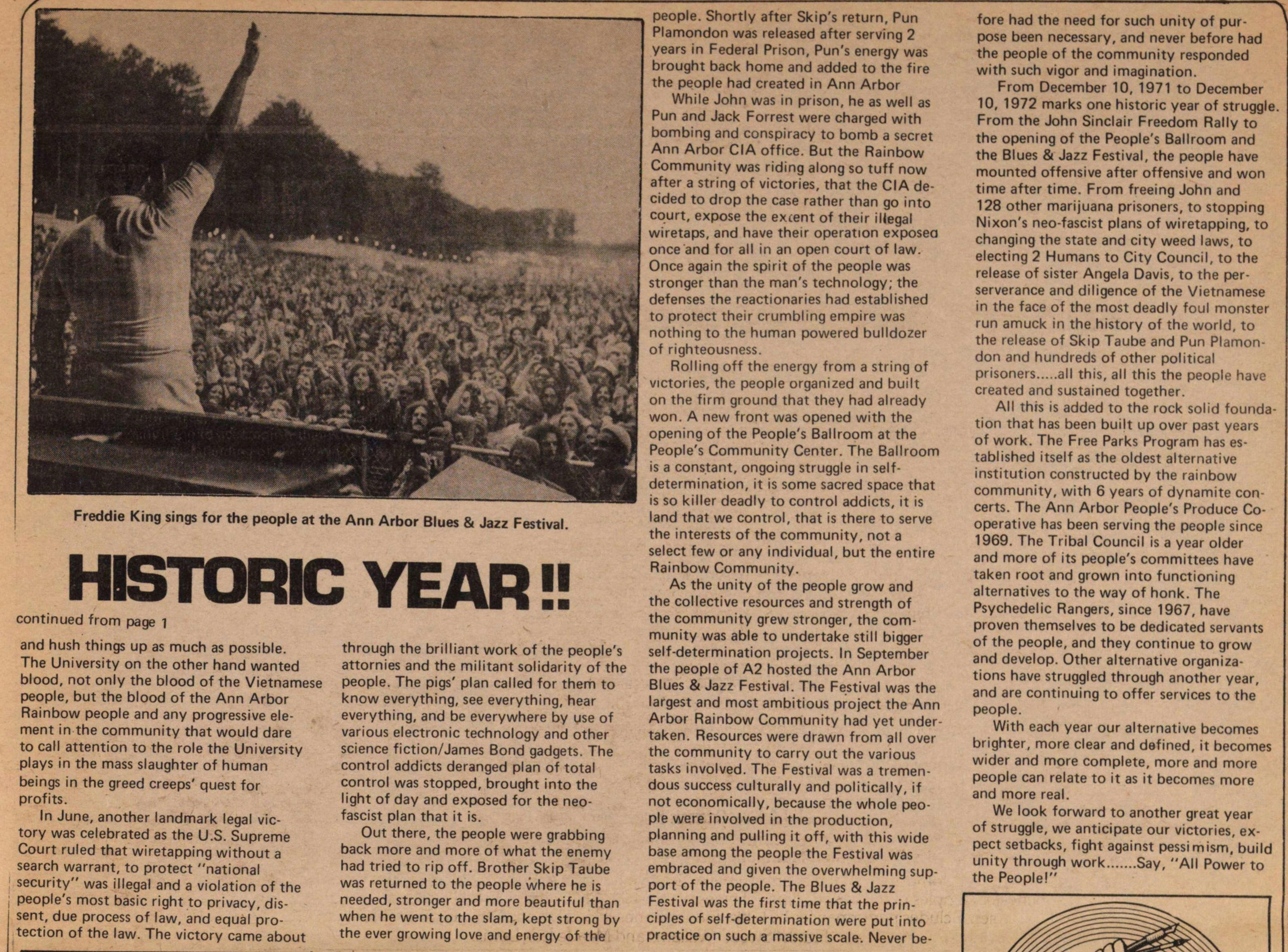 look on each act as

their food, not words.

drink all you can, use

dope, look them in the face

keep from crying. love them

so they won/t understand you.

clothes, look back at all

times, when they breathe

At each stage in the development of our people and Community there are events that stand above others, that crystalize, for a brief moment, the incredible force and power of the people united. Each act is history when the people make it so, when we unite to change the course of history... It is done. Fact. This past year, from December to December, we saw our people unite and roll over wall after wall and break chain after chain that the Man tried to put around us, to keep us separated, isolated and under control. Miles we moved, in leaps and bounds, down the road to self-determination.

Three days after the Rally John was let out on bond. For 2 1/2 years John had argued from behind the walls to secure his right to bond, every court up to and including the Michigan Supreme Court and the Federal District Court denied John bond. But 15,000 people in Crisler Arena and the massive public support for the Chairman's release resulted in the Michigan Supreme Court granting John bond, on their own motion, after having once denied him on his. The Michigan Legislature went on to pass a new weed law because of the energy and demands of the people, they lowered the hassle for weed all the way around, from sale to possession and use. The Michigan Supreme Court, in March of '72 overturned John Sinclair's conviction, holding that the present marijuana laws were unconstitutional because the penalties were "cruel and unusual". This is the same argument that John & Leni presented five years before. Subsequently, the State of Michigan released 128 men and women from prison because of the Michigan Supreme Court decision in John's case. In this great victory, John and Leni were the cutting edge, the Rainbow People's Party was the blade and the people of Michigan and Babylon were the power behind the cut. In Ann Arbor, the people united and rallied around the Human Rights Party and scored a smashing victory by electing 2 Humans to the City Council. The Humans moved quickly and within two months there was a new city ordinance that made possession of weed a $5 fine! The dope laws were completely overturned and brought a tad closer to reality, now millions of people can go about their business, getting high and building for the future without fear of pigs using weed laws to silence any effective voice for change.

The people got farther and farther out, out of control. Bomb craters were dug on campus and in different places in the community. Thirty-eight people were arrested for "malicious destruction of property" for digging craters on the Diag on May 19 to celebrate the birthdays of Ho Chi Minh and Malcolm X. The people of Ann Arbor united around the 38 and the demand to end the blood soaked war. The city saw it in its best interest to drop all the charges (continued on page 17)

and hush things up as much as possible. The University on the other hand wanted blood, not only the blood of the Vietnamese people, but the blood of the Ann Arbor Rainbow people and any progressive element in the community that would dare to call attention to the role the University plays in the mass slaughter of human beings in the greed creeps' quest for profits.

In June, another landmark legal victory was celebrated as the U.S. Supreme Court ruled that wiretapping without a search warrant, to protect "national security" was illegal and a violation of the people's most basic right to privacy, dissent, due process of law, and equal protection of the law. The victory carne about through the brilliant work of the people's attorneys and the militant solidarity of the people. The pigs' plan called for them to know everything, see everything, hear everything, and be everywhere by use of various electronic technology and other science fiction/James Bond gadgets. The control addicts deranged plan of total control was stopped, brought into the light of day and exposed for the neo-fascist plan that it is.

Out there, the people were grabbing back more and more of what the enemy had tried to rip off. Brother Skip Taube was returned to the people where he is needed, stronger and more beautiful than when he went to the slam, kept strong by the ever growing love and energy of the people. Shortly after Skip's return, Pun Plamondon was released after serving 2 years in Federal Prison, Pun's energy was brought back home and added to the fire the people had created in Ann Arbor.

While John was in prison, he as well as Pun and Jack Forrest were charged with bombing and conspiracy to bomb a secret Ann Arbor CIA office. But the Rainbow Community was riding along so tuff now after a string of victories, that the CIA decided to drop the case rather than go into court, expose the extent of their illegal wiretaps, and have their operation exposed once and for all in an open court of law. Once again the spirit of the people was stronger than the man's technology; the defenses the reactionaries had established to protect their crumbling empire was nothing to the human powered bulldozer of righteousness.

Rolling off the energy from a string of victories, the people organized and built on the firm ground that they had already won. A new front was opened with the opening of the People's Ballroom at the People's Community Center. The Ballroom is a constant, ongoing struggle in self-determination, it is some sacred space that is so killer deadly to control addicts, it is land that we control, that is there to serve the interests of the community, not a select few or any individual, but the entire Rainbow Community.

As the unity of the people grow and the collective resources and strength of the community grew stronger, the community was able to undertake still bigger self-determination projects. In September the people of A2 hosted the Ann Arbor Blues & Jazz Festival. The Festival was the largest and most ambitious project the Ann Arbor Rainbow Community had yet undertaken. Resources were drawn from all over the community to carry out the various tasks involved. The Festival was a tremendous success culturally and politically, if not economically, because the whole people were involved in the production, planning and pulling it off, with this wide base among the people the Festival was embraced and given the overwhelming support of the people. The Blues & Jazz Festival was the first time that the principles of self-determination were put into practice on such a massive scale. Never before had the need for such unity of purpose been necessary, and never before had the people of the community responded with such vigor and imagination.

From December 10, 1971 to December 10, 1972 marks one historic year of struggle. From the John Sinclair Freedom Rally to the opening of the People's Ballroom and the Blues & Jazz Festival, the people have mounted offensive after offensive and won time after time. From freeing John and 128 other marijuana prisoners, to stopping Nixon's neo-fascist plans of wiretapping, to changing the state and city weed laws, to electing 2 Humans to City Council, to the release of sister Angela Davis, to the perseverance and diligence of the Vietnamese in the face of the most deadly foul monster run amuck in the history of the world, to the release of Skip Taube and Pun Plamondon and hundreds of other political prisoners.... all this, all this the people have created and sustained together.

All this is added to the rock solid foundation that has been built up over past years of work. The Free Parks Program has established itself as the oldest alternative institution constructed by the rainbow community, with 6 years of dynamite concerts. The Ann Arbor People's Produce Cooperative has been serving the people since 1969. The Tribal Council is a year older and more of its people's committees have taken root and grown into functioning alternatives to the way of honk. The Psychedelic Rangers, since 1967, have proven themselves to be dedicated servants of the people, and they continue to grow and develop. Other alternative organizations have struggled through another year, and are continuing to offer services to the people. With each year our alternative becomes brighter, more clear and defined, it becomes wider and more complete, more and more people can relate to it as it becomes more and more real. We look forward to another great year of struggle, we anticipate our victories, expect setbacks, fight against pessimism, build unity through work Say, "All Power to the People!"