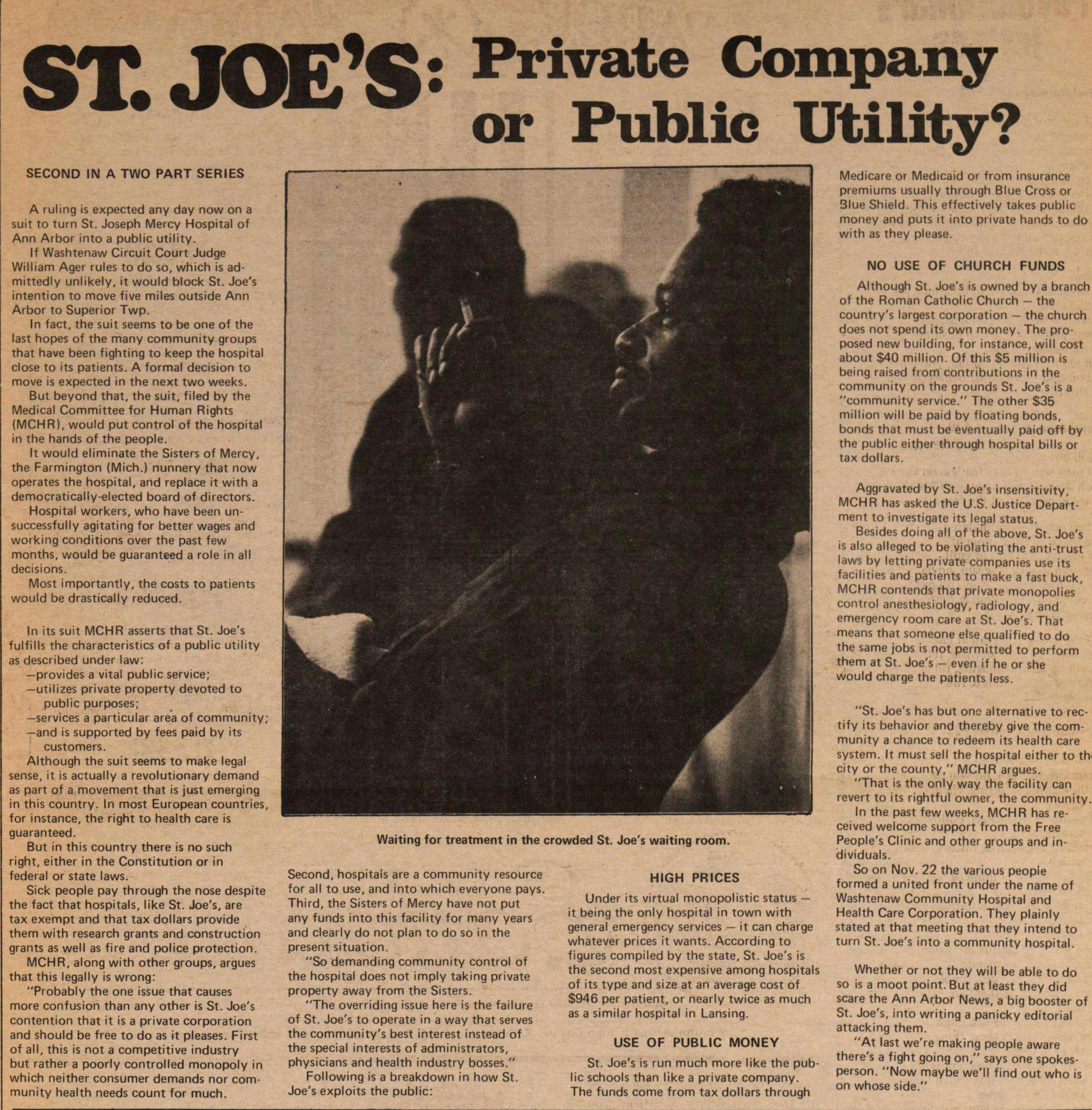 SECOND IN A TWO PART SERIES

A ruling is expected any day now on a suit to turn St. Joseph Mercy Hospital of Ann Arbor into a public utility. If Washtenaw Circuit Court Judge William Ager rules to do so, which is admittedly unlikely, it would block St. Joe's intention to move five miles outside Ann Arbor to Superior Twp.

In fact, the suit seems to be one of the last hopes of the many community groups that have been fighting to keep the hospital close to its patients. A formal decision to move is expected in the next two weeks.

But beyond that, the suit, filed by the Medical Committee for Human Rights (MCHR), would put control of the hospital in the hands of the people.

It would elimínate the Sisters of Mercy, the Farmington (Mich.) nunnery that now operates the hospital, and replace it with a democratically-elected board of directors.

Hospital workers, who have been unsuccessfully agitating for better wages and working conditions over the past few months, would be guaranteed a role in all decisions.

Most importantly, the costs to patients would be drastically reduced.

In its suit MCHR asserts that St. Joe's fulfills the characteristics of a public utility as described under law:

-services a particular area of community;

-and is supported by fees paid by its customers.

Although the suit seems to make legal sense, it is actually a revolutionary demand as part of a movement that is just emerging in this country. In most European countries, for instance, the right to health care is guaranteed.

But in this country there is no such right, either in the Constitution or in federal or state laws.

Sick people pay through the nose despite the fact that hospitals, like St. Joe's, are tax exempt and that tax dollars provide them with research grants and construction grants as well as fire and police protection.

MCHR, along with other groups, argues that this legally is wrong:

"Probably the one issue that causes more confusion than any other is St. Joe's contention that it is a private Corporation and should be free to do as it pleases. First of all, this is not a competitive industry but rather a poorly controlled monopoly in which neither consumer demands nor community health needs count for much. Second, hospitals are a community resource for all to use, and into which everyone pays. Third, the Sisters of Mercy have not put any funds into this facility for many years and clearly do not plan to do so in the present situation.

"So demanding community control of the hospital does not imply taking private property away from the Sisters.

"The overriding issue here is the failure of St. Joe's to operate in a way that serves the community's best interest instead of the special interests of administrators, physicians and health industry bosses."   xxxxxxxxx

Following is a breakdown in how St. Joe's exploits the public:

Under its virtual monopolistic status - it being the only hospital in town with general emergency services - it can charge whatever prices it wants. According to figures compiled by the state, St. Joe's is the second most expensive among hospitals of ts type and size at an average cost of $946 per patient, or nearly twice as much as a similar hospital in Lansing.

USE OF PUBLIC MONEY

St. Joe's is run much more like the public schools than like a private company. The funds come from tax dollars through Medicare or Medicaid or from insurance premiums usually through Blue Cross or Blue Shield. This effectively takes public money and puts it into private hands to do with as they please.

NO USE OF CHURCH FUNDS

Although St. Joe's is owned by a branch of the Roman Catholic Church - the country's largest Corporation - the church does not spend its own money. The proposed new building, for instance, will cost about $40 million. Of this $5 million is being raised from contributions in the community on the grounds St. Joe's is a "community service." The other $35 million will be paid by floating bonds, bonds that must be eventually paid off by the public either through hospital bilis or tax dollars.

Aggravated by St. Joe's insensitivity, MCHR has asked the U.S. Justice Department to investígate its legal status. Besides doing all of the above, St. Joe's is also alleged to be violating the anti-trust laws by letting private companies use its facilities and patients to make a fast buck, MCHR contends that private monopolies control anesthesiology, radiology, and emergency room care at St. Joe's. That means that someone else qualified to do the same jobs is not permitted to perform them at St. Joe's - even if he or she would charge the patients less.

"St. Joe's has but one alternative to rectify its behavior and thereby give the community a chance to redeem its health care system. It must sell the hospital either to the city or the county," MCHR argues.

"That is the only way the facility can revert to its rightful owner, the community.

In the past few weeks, MCHR has received welcome support from the Free People's Clinic and other groups and individuals.

So on Nov. 22 the various people formed a united front under the name of Washtenaw Community Hospital and Health Care Corporation. They plainly stated at that meeting that they intend to turn St. Joe's into a community hospital.

Whether or not they will be able to do so is a moot point. But at least they did scare the Ann Arbor News, a big booster of St. Joe's, into writing a panicky editorial attacking them.

"At last we're making people aware there's a fight going on," says one spokesperson. "Now maybe we'll find out who is on whose side."