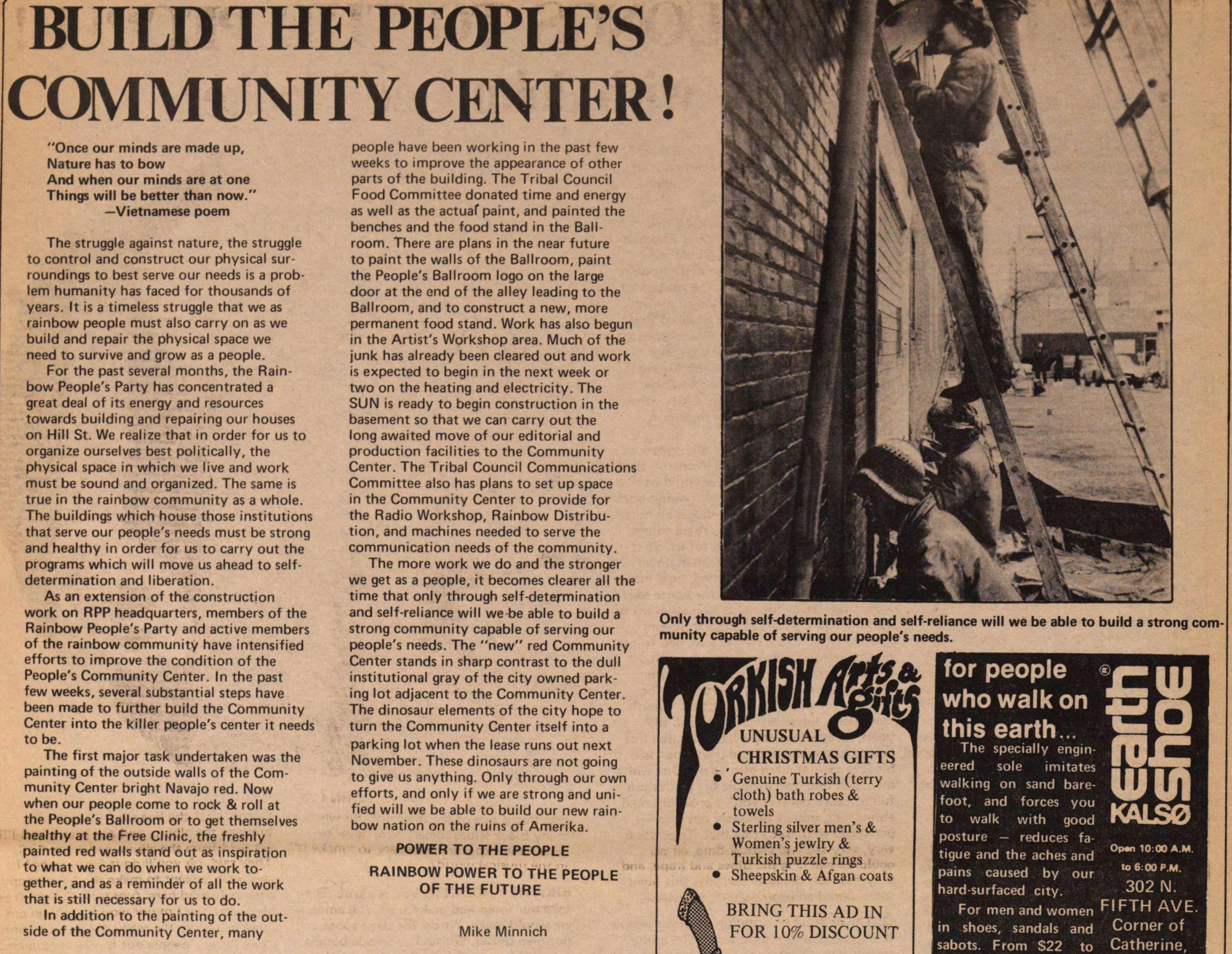 "Once our minds are made up.

Nature has to bow

And when our minds are at one

Things will be better than now."

The struggle against nature, the struggle to control and construct our physical surroundings to best serve our needs s a problem humanity has faced for thousands of years. It is a timeless struggle that we as rainbow people must also carry on as we build and repair the physical space we need to survive and grow as a people.

For the past several months, the Rainbow People's Party has concentrated a great deal of its energy and resources towards building and repairing our houses on Hill St. We realize that in order for us to organize ourselves best politically, the physical space in which we live and work must be sound and organized. The same is true in the rainbow community as a whole. The buildings which house those institutions that serve our people's needs must be strong and healthy in order for us to carry out the programs which will move us ahead to self-determination and liberation.

As an extension of the construction work on RPP headquarters, members of the Rainbow People's Party and active members of the rainbow community have intensified efforts to improve the condition of the People's Community Center. In the past few weeks, several substantial steps have been made to further build the Community Center into the killer people's center it needs to be.

The first major task undertaken was the painting of the outside walls of the Community Center bright Navajo red. Now when our people come to rock & roll at the People's Ballroom or to get themselves healthy at the Free Clinic, the freshly painted red walls stand out as inspiration to what we can do when we work together, and as a reminder of all the work that is still necessary for us to do.

In addition to the painting of the outside of the Community Center, many people have been working n the past few weeks to improve the appearance of other parts of the building. The Tribal Council Food Committee donated time and energy as well as the actual paint, and painted the benches and the food stand in the Ballroom. There are plans in the near future to paint the walls of the Ballroom, paint the People's Ballroom logo on the large door at the end of the alley leading to the Ballroom, and to construct a new, more permanent food stand. Work has also begun in the Artist's Workshop area. Much of the junk has already been cleared out and work is expected to begin in the next week or two on the heating and electricity. The SUN is ready to begin construction in the basement so that we can carry out the long awaited move of our editorial and production facilities to the Community Center. The Tribal Council Communications Committee also has plans to set up space in the Community Center to provide for the Radio Workshop, Rainbow Distribution, and machines needed to serve the communication needs of the community.

The more work we do and the stronger we get as a people, it becomes clearer all the time that only through self-determination and self-reliance will we be able to build a strong community capable of serving our people's needs. The "new" red Community Center stands in sharp contrast to the dull institutional gray of the city owned parking lot adjacent to the Community Center. The dinosaur elements of the city hope to turn the Community Center itself into a parking lot when the lease runs out next November. These dinosaurs are not going to give us anything. Only through our own efforts, and only if we are strong and unified will we be able to build our new rainbow nation on the ruins of Amerika.

RAINBOW POWER TO THE PEOPLE OF THE FUTURE

Only through self-determination and self-reliance will we be able to build a strong community capable of serving our people's needs.