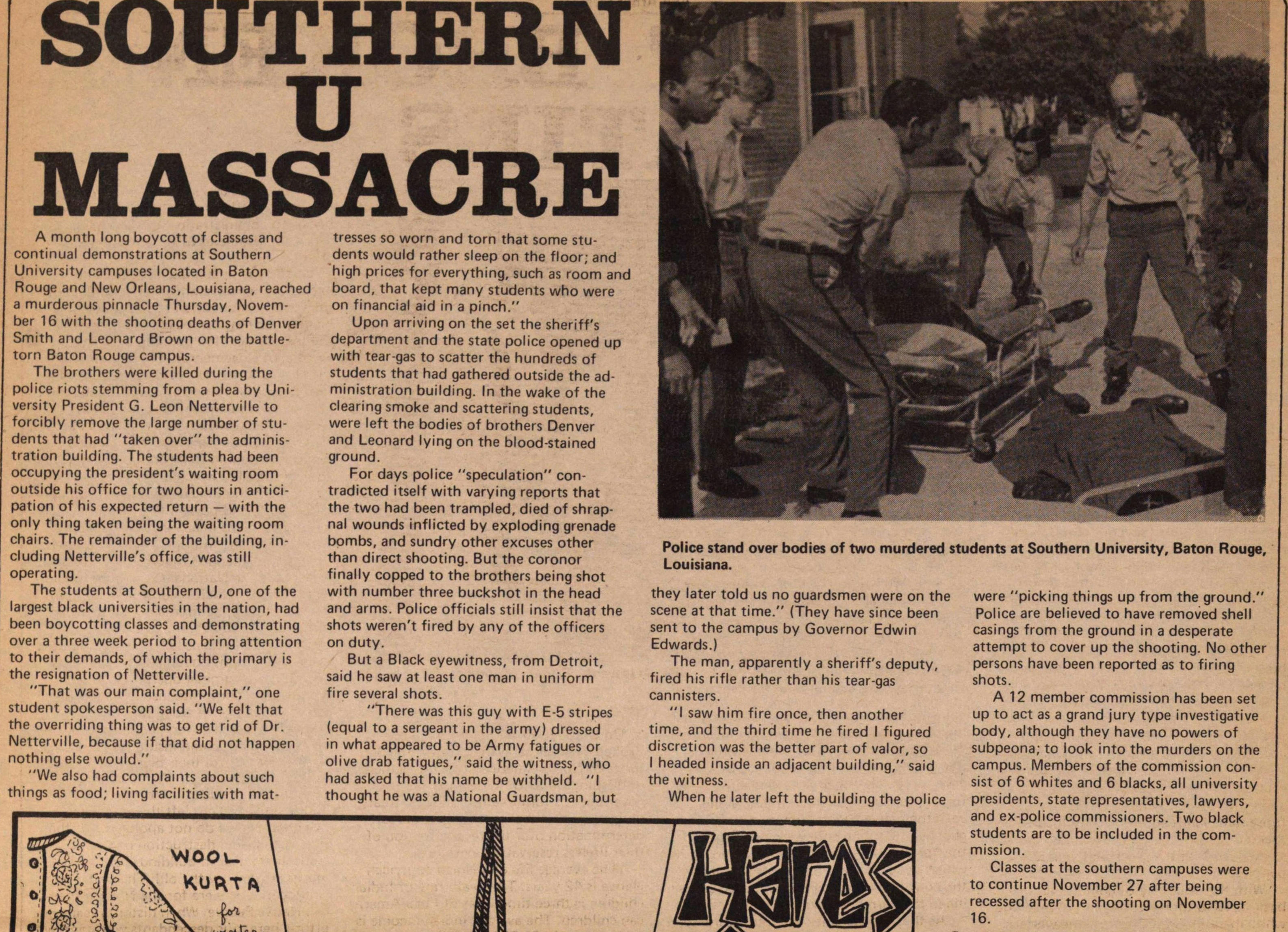 The brothers were killed during the police riots stemming from a plea by University President G. Leon Netterville to forcibly remove the large number of students that had "taken over" the administration building. The students had been occupying the president's waiting room outside his office for two hours in anticipation of his expected return-with the only thing taken being the waiting room chairs. The remainder of the building, including Netterville's office, was still operating.

The students at Southern U, one of the largest black universities in the nation, had been boycotting classes and demonstrating over a three week period to bring attention to their demands, of which the primary is the resignation of Netterville.

"That was our main complaint," one student spokesperson said. "We felt that the overriding thing was to get rid of Dr. Netterville, because if that did not happen nothing else would."

"We also had complaints about such things as food; living facilities with mattresses so worn and torn that some students would rather sleep on the floor; and high prices for everything, such as room and board, that kept many students who were on financial aid in a pinch."

Upon arriving on the set the sheriff's department and the state police opened up with tear-gas to scatter the hundreds of students that had gathered outside the administration building. In the wake of the clearing smoke and scattering students, were left the bodies of brothers Denver and Leonard lying on the blood-stained ground.

For days police "speculation" contradicted itself with varying reports that the two had been trampled, died of shrapnel wounds inflicted by exploding grenade bombs, and sundry other excuses other than direct shooting. But the coroner finally copped to the brothers being shot with number three buckshot in the head and arms. Police officials still insist that the shots weren't fired by any of the officers on duty.

But a Black eyewitness, from Detroit, said he saw at least one man in uniform fire several shots.

"There was this guy with E-5 stripes (equal to a sergeant in the army) dressed in what appeared to be Army fatigues or olive drab fatigues," said the witness, who had asked that his name be withheld. "I thought he was a National Guardsman, but they later told us no guardsmen were on the scene at that time." (They have since been sent to the campus by Governor Edwin Edwards.)

The man, apparently a sheriff's deputy, fired his rifle rather than nis tear-gas cannisters.

"I saw him fire once, then another time, and the third time he fired I figured discretion was the better part of valor, so I headed inside an adjacent building," said the witness.

When he later left the building the police were "picking things up from the ground." Police are believed to have removed shell casings from the ground in a desperate attempt to cover up the shooting. No other persons have been reported as to firing shots.

A 12 member commission has been set up to act as a grand jury type investigative body, although they have no powers of subpeona to look into the murders on the campus. Members of the commission consist of 6 whites and 6 blacks, all university presidents, state representatives, lawyers, and ex-police commissioners. Two black students are to be included in the commission.

Classes at the southern campuses were to continue November 27 after being recessed after the shooting on November 16.