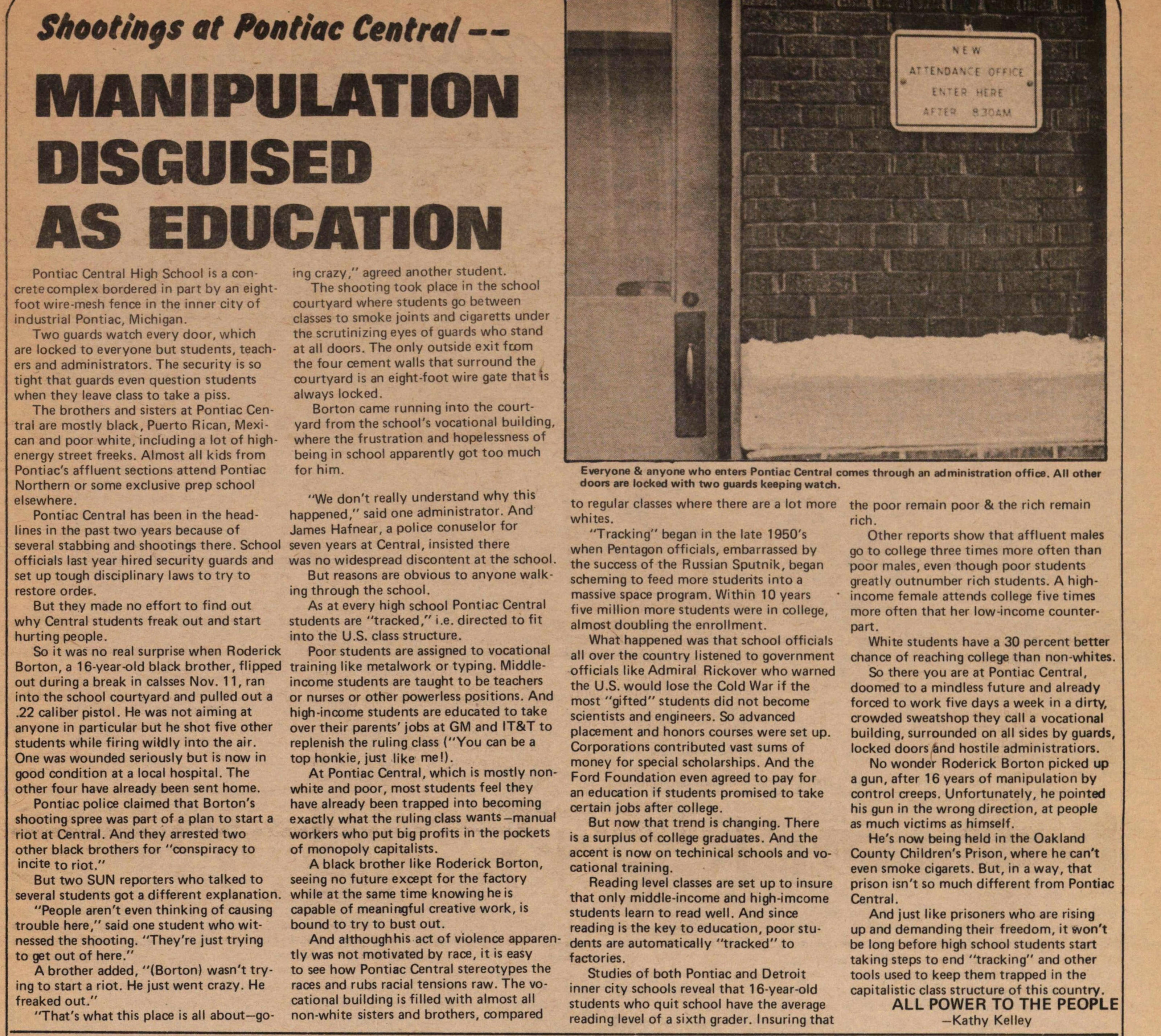 Pontiac Central High School is a concrete complex bordered in part by an eight-foot wire-mesh fence in the inner city of industrial Pontiac, Michigan.

Two guards watch every door, which are locked to everyone but students, teachers and administrators. The security is so tight that guards even question students when they leave class to take a piss.

The brothers and sisters at Pontiac Central are mostly black, Puerto Rican, Mexican and poor white, including a lot of high-energy street freeks. Almost all kids from Pontiac's affluent sections attend Pontiac Northern or some exclusive prep school elsewhere.

Pontiac Central has been in the headlines in the past two years because of several stabbing and shootings there. School officials last year hired security guards and set up tough disciplinary laws to try to restore order.

But they made no effort to find out why Central students freak out and start hurting people. So it was no real surprise when Roderick Borton, a 16-year-old black brother, flipped out during a break in calsses Nov. 11, ran into the school courtyard and pulled out a .22 caliber pistol. He was not aiming at anyone in particular but he shot five other students while firing wildly into the air. One was wounded seriously but is now in good condition at a local hospital. The other four have already been sent home.

Pontiac police claimed that Borton's shooting spree was part of a plan to start a riot at Central. And they arrested two other black brothers for "conspiracy to incite to riot."

But two SUN reporters who talked to several students got a different explanation.

"People aren't even thinking of causing trouble here," said one student who witnessed the shooting. "They're just trying to get out of here."

A brother added, "(Borton) wasn't trying to start a riot. He just went crazy. He freaked out."

'That's what this place is all – going crazy," agreed another student.

The shooting took place in the school courtyard where students go between classes to smoke joints and cigaretts under the scrutinizing eyes of guards who stand at all doors. The only outside exit from the four cement walls that surround the courtyard is an eight-foot wire gate that is always locked.

Borton carne running into the courtyard from the school's vocational building, where the frustration and hopelessness of being in school apparently got too much for him.

"We don't really understand why this happened," said one administrator. And James Hafnear, a police conuselor for seven years at Central, insisted there was no widespread discontent at the school.

But reasons are obvious to anyone walking through the school. As at every high school Pontiac Central students are "tracked," i.e. directed to fit into the U.S. class structure.

Poor students are assigned to vocational training like metalwork or typing. Middle-income students are taught to be teachers or nurses or other powerless positions. And high-income students are educated to take over their parents' jobs at GM and IT&T to replenish the ruling class ("You can be a top honkie, just like me!).

At Pontiac Central, which is mostly nonwhite and poor, most students feel they have already been trapped into becoming exactly what the ruling class wants–-manual workers who put big profits in the pockets of monopoly capitalists.

A black brother like Roderick Borton, seeing no future except for the factory while at the same time knowing he is capable of meaningful creative work, is bound to try to bust out.

And although his act of violence apparently was not motivated by race, it is easy to see how Pontiac Central stereotypes the races and rubs racial tensions raw. The vocational building is filled with almost all non-white sisters and brothers, compared to regular classes where there are a lot more whites.

"Tracking" began n the late 1950's when Pentagon officials, embarrassed by the success of the Russian Sputnik, began scheming to feed more students into a massive space program. Within 10 years five million more students were in college, almost doubling the enrollment.

What happened was that school officials all over the country listened to government officials like Admiral Rickover who warned the U.S. would lose the Cold War if the most "gifted" students did not become scientists and engineers. So advanced placement and honors courses were set up. Corporations contributed vast sums of money for special scholarships. And the Ford Foundation even agreed to pay for an education if students promised to take certain jobs after college.

But now that trend is changing. There is a surplus of college graduates. And the accent is now on techinical schools and vocational training.

Reading level classes are set up to insure that only middle-income and high-imcome students learn to read well. And since reading is the key to education, poor students are automatically "tracked" to factories.

Studies of both Pontiac and Detroit inner city schools reveal that 16-year-old students who quit school have the average reading level of a sixth grader. Insuring that the poor remain poor & the rich remain rich.

White students have a 30 percent better chance of reaching college than non-whites.

So there you are at Pontiac Central, doomed to a mindless future and already forced to work five days a week in a dirty, crowded sweatshop they call a vocational building, surrounded on all sides by guards, locked doors and hostile administratiors.

No wonder Roderick Borton picked up a gun, after 16 years of manipulation by control creeps. Unfortunately, he pointed his gun in the wrong direction, at people as much victims as himself.

He's now being held in the Oakland County Children's Prison, where he can't even smoke cigarets. But, in a way, that prison isn't so much different from Pontiac Central.

And just like prisoners who are rising up and demanding their freedom, it won't be long before high school students start taking steps to end "tracking" and other tools used to keep them trapped in the capitalistic class structure of this country. ALL POWER TO THE PEOPLE