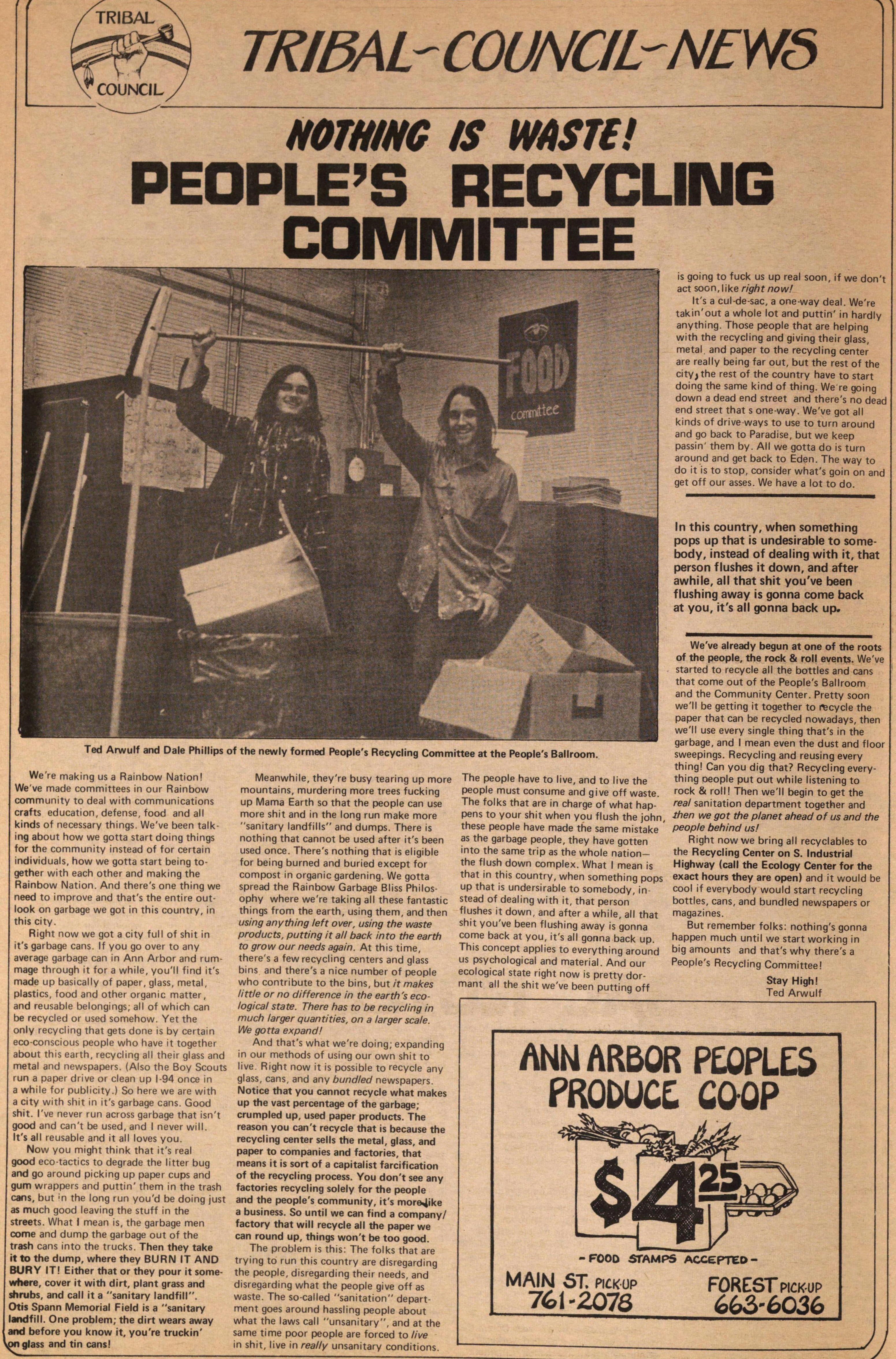 We're making us a Rainbow Nation! We've made committees in our Rainbow community to deal with Communications crafts education, defense, food and all kinds of necessary things. We've been talking about how we gotta start doing things for the community instead of for certain individuals, how we gotta start being together with each other and making the Rainbow Nation. And there's one thing we need to improve and that's the entire outlook on garbage we got in this country, in this city.

Right now we got a city full of shit in it's garbage cans. If you go over to any average garbage can in Ann Arbor and rummage through it for a while, you'll find it's made up basically of paper, glass, metal, plastics, food and other organic matter, and reusable belongings; all of which can be recycled or used somehow. Yet the only recycling that gets done is by certain eco-conscious people who have it together about this earth, recycling all their glass and metal and newspapers. (Also the Boy Scouts run a paper drive or clean up 1-94 once in a while for publicity.) So here we are with a city with shit in it's garbage cans. Good shit. l've never run across garbage that isn't good and can't be used, and I never will. It's all reusable and it all loves you.

Now you might think that it's real good eco-tactics to degrade the litter bug and go around picking up paper cups and gum wrappers and puttin' them in the trash cans, but in the long run you'd be doing just as much good leaving the stuff in the streets. What I mean is, the garbage men come and dump the garbage out of the trash cans into the trucks. Then they take it to the dump, where they BURN IT AND BURY IT! Either that or they pour it somewhere, cover it with dirt, plant grass and shrubs, and cali it a "sanitary landfill". Otis Spann Memorial Field is a "sanitary landfill. One problem; the dirt wears away and before you know it, you're truckin' on glass and tin cans!

Meanwhile, they're busy tearing up more mountains, murdering more trees fucking up Mama Earth so that the people can use more shit and in the long run make more "sanitary landfills" and dumps. There is nothing that cannot be used after it's been used once. There's nothing that is eligible for being burned and buried except for compost in organic gardening. We gotta spread the Rainbow Garbage Bliss Philosophy where we're taking all these fantastic things from the earth, using them, and then using anything left over, using the waste products, putting it all back into the earth to grow our needs again. At this time, there's a few recycling centers and glass bins and there's a nice number of people who contribute to the bins, but it makes little or no difference in the earth's ecological state. There has to be recycling in much larger quantities, on a larger scale. We gotta expand!

And that's what we're doing; expanding in our methods of using our own shit to live. Right now it is possible to recycle any glass, cans, and any bundled newspapers. Notice that you cannot recycle what makes up the vast percentage of the garbage; crumpled up, used paper products. The reason you can't recycle that is because the recycling center sells the metal, glass, and paper to companies and factories, that means it is sort of a capitalist farcification of the recycling process. You don't see any factories recycling solely for the people and the people's community, it's more like a business. So until we can find a company factory that will recycle all the paper we can round up, things won't be too good.

The problem is this: The folks that are trying to run this country are disregarding the people, disregarding their needs, and disregarding what the people give off as waste. The so-called "sanitation" department goes around hassling people about what the laws call "unsanitary", and at the same time poor people are forced to live in shit, live in really unsanitary conditions. The people have to live, and to live the people must consume and give off waste. The folks that are in charge of what happens to your shit when you flush the john, these people have made the same mistake as the garbage people, they have gotten into the same trip as the whole nation–the flush down complex. What I mean is that in this country, when something pops up that is undersirable to somebody, instead of dealing with it, that person flushes it down, and after a while, all that shit you've been flushing away is gonna come back at you, it's all gonna back up. This concept applies to everything around us psychological and material. And our ecological state right now is pretty dormant all the shit we've been putting off is going to fuck us up real soon, if we don't act soon, like right now!

It's a cul-de-sac, a one-way deal. We're takin' out a whole lot and puttin' in hardly anything. Those people that are helping with the recycling and giving their glass, metal, and paper to the recycling center are really being far out, but the rest of the city; the rest of the country have to start doing the same kind of thing. We're going down a dead end street and there's no dead end street that's one-way. We've got all kinds of drive-ways to use to turn around and go back to Paradise, but we keep passin' them by. All we gotta do is turn around and get back to Eden. The way to do it is to stop, consider what's goin on and get off our asses. We have a lot to do.

We've already begun at one of the roots of the people, the rock & roll events. We've started to recycle all the bottles and cans that come out of the People's Ballroom and the Community Center. Pretty soon we'll be getting it together to recycle the paper that can be recycled nowadays, then we'll use every single thing that's in the garbage, and I mean even the dust and floor sweepings. Recycling and reusing every thing! Can you dig that? Recycling everything people put out while listening to rock & roll! Then we'll begin to get the real sanitation department together and then we got the planet ahead of us and the people behind us!

Right now we bring all recyclables to the Recycling Center on S. Industrial Highway (call the Ecology Center for the exact hours they are open) and it would be cool if everybody would start recycling bottles, cans, and bundled newspapers or magazines.

But remember folks: nothing's gonna happen much until we start working in big amounts and that's why there's a People's Recycling Committee!

In this country, when something pops up that is undesirable to somebody, instead of dealing with it, that person flushes it down, and after awhile, all that shit you've been flushing away is gonna come back at you, it's all gonna back up.