The Politics Of Prison 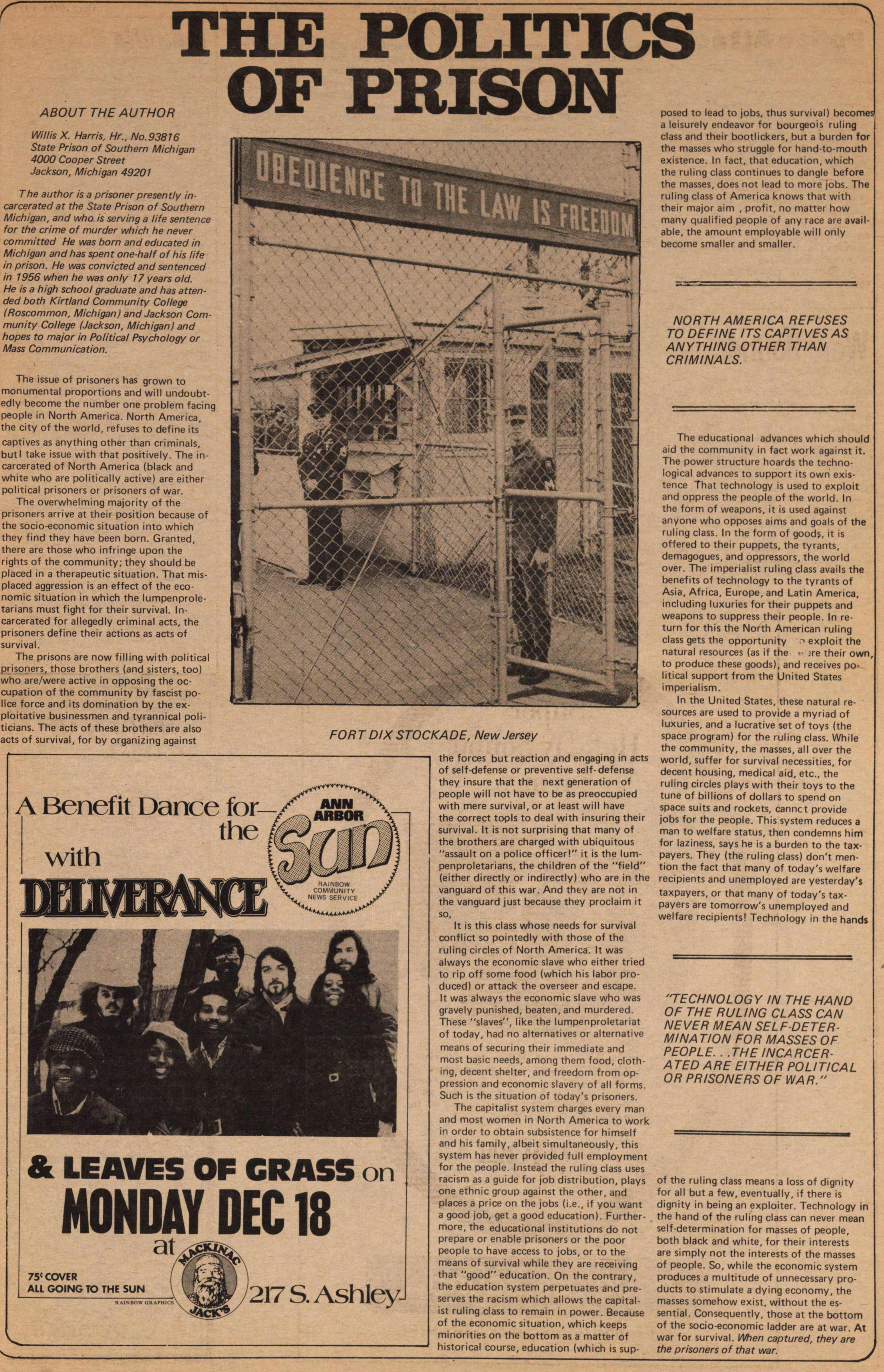 The author is a prisoner presently incarcerated at the State Prison of Southern Michigan, and who is serving a Life sentence for the crime of murder which he never committed. He was born and educated in Michigan and has spent one-half of his Life in prison. He was convicted and sentenced in 1956 when he was only 17 years old. He is a high school graduate and has attended both Kirtland Community College (Roscommon, Michigan) and Jackson Community College (Jackson, Michigan) and hopes to major in Political Psychology or Mass Communication.

The issue of prisoners has grown to monumental proportions and will undoubtedly become the number one problem facing people in North America. North America, the city of the world, refuses to define its captives as anything other than criminals, but l take issue with that positively. The incarcerated of North America (black and white who are politically active) are either political prisoners or prisoners of war.

The overwhelming majority of the prisoners arrive at their position because of the socio-economic situation into which they find they have been born. Granted, there are those who infringe upon the rights of the community; they should be placed in a therapeutic situation. That misplaced aggression is an effect of the economic situation in which the lumpenproletarians must fight for their survival. Incarcerated for allegedly criminal acts, the prisoners define their actions as acts of survival.

The prisons are now filling with political prisoners, those brothers (and sisters, too) who are/were active in opposing the occupation of the community by fascist police force and its domination by the exploitative businessmen and tyrannical politicians. The acts of these brothers are also acts of survival, for by organizing against the forces but reaction and engaging in acts of self-defense or preventive self-defense they ensure that the next generation of people will not have to be as preoccupied with mere survival, or at least will have the correct tools to deal with insuring their survival. It is not surprising that many of the brothers are charged with ubiquitous “assault on a police officer!” it is the lumpenproletarians, the children of the “field” (either directly or indirectly) who are in the vanguard of this war. And they are not in the vanguard just because they proclaim it so.

It is this class whose needs for survival conflict so pointedly with those of the ruling circles of North America. It was always the economic slave who either tried to rip off some food (which his labor produced) or attack the overseer and escape. It was always the economic slave who was gravely punished, beaten, and murdered. These “slaves”, like the lumpenproletariat of today, had no alternatives or alternative means of securing their immediate and most basic needs, among them food, clothing, decent shelter, and freedom from oppression and economic slavery of all forms. Such is the situation of today`s prisoners.

The capitalist system charges every man and most women in North America to work in order to obtain subsistence for himself and his family, albeit simultaneously, this system has never provided full employment for the people. Instead the ruling class uses racism as a guide for job distribution, plays one ethnic group against the other, and places a price on the jobs (i.e., if you want a good job, get a good education). Furthermore, the educational institutions do not prepare or enable prisoners or the poor people to have access to jobs, or to the means of survival while they are receiving that “good” education. On the contrary, the education system perpetuates and preserves the racism which allows the capitalist ruling class to remain in power. Because of the economic situation, which keeps minorities on the bottom as a matter of historical course, education (which is posed to lead to jobs, thus survival) becomes a leisurely endeavor for bourgeois ruling class and their bootlickers, but a burden for the masses who struggle for hand-to-mouth existence. In fact, that education, which the ruling class continues to dangle before the masses, does not lead to more jobs. The ruling class of America knows that with their major aim, profit, no matter how many qualified people of any race are available, the amount employable will only become smaller and smaller.

NORTH AMERICA REFUSES TO DEFINE ITS CAPTIVES AS ANYTHING OTHER THAN CRIMINALS.

The educational advances which should aid the community in fact work against it. The power structure hoards the technological advances to support its own existence. That technology is used to exploit and oppress the people of the world. In the form of weapons, it is used against anyone who opposes aims and goals of the ruling class. In the form of goods, it is offered to their puppets, the tyrants, demagogues, and oppressors, the world over. The imperialist ruling class avails the benefits of technology to the tyrants of Asia, Africa, Europe, and Latin America, including luxuries for their puppets and weapons to suppress their people. In return for this the North American ruling class gets the opportunity to exploit the natural resources (as if they were their own, to produce these goods), and receives political support from the United States imperialism.

In the United States, these natural resources are used to provide a myriad of luxuries, and a lucrative set of toys (the space program) for the ruling class. While the community, the masses, all over the world, suffer for survival necessities, for decent housing, medical aid, etc., the ruling circles plays with their toys to the tune of billions of dollars to spend on space suits and rockets, cannot provide jobs for the people. This system reduces a man to welfare status, then condemns him for laziness, says he is a burden to the taxpayers. They (the ruling class) don’t mention the fact that many of today’s welfare recipients and unemployed are yesterday’s taxpayers, or that many of today’s taxpayers are tomorrow’s unemployed and welfare recipients!

“TECHNOLOGY IN THE HAND OF THE RULING CLASS CAN NEVER MEAN SELF-DETERMINATON FOR MASSES OF PEOPLE. . . THE INCARCERATED ARE EITHER POLITICAL OR PRISONERS OF WAR.”

Technology in the hands of the ruling class means a loss of dignity for all but a few, eventually, if there’s dignity in being an exploiter. Technology in the hand of the ruling class can never mean self-determination for masses of people, both black and white, for their interests are simply not the interests of the masses of people. So, while the economic system produces a multitude of unnecessary products to stimulate a dying economy, the masses somehow exist, without the essential. Consequently, those at the bottom of the socio-economic ladder are at war. At war for survival. When captured, they are the prisoners of that war.