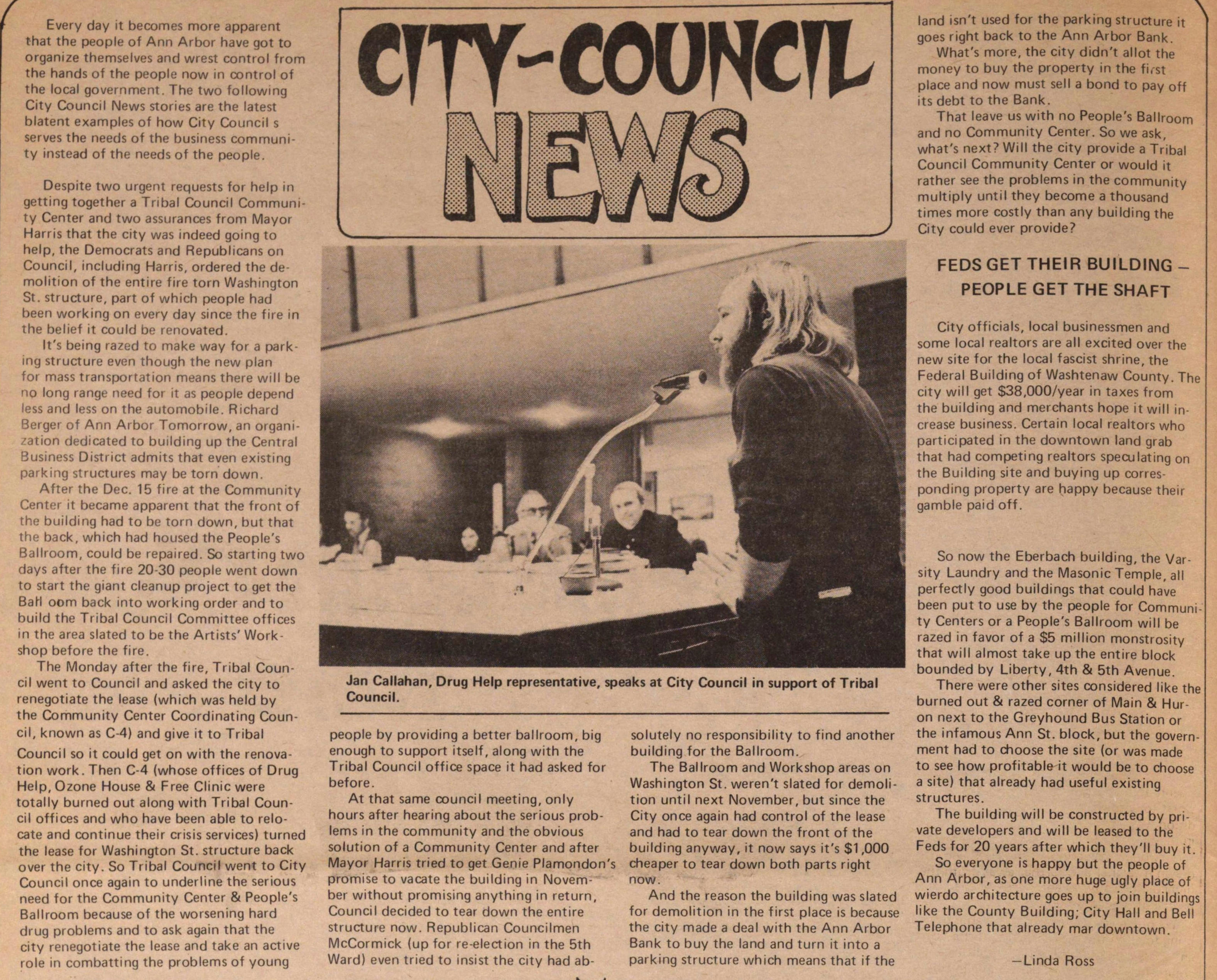 Despite two urgent requests for help in getting together a Tribal Council Community Center and two assurances from Mayor Harris that the city was indeed going to help, the Democrats and Republicans on Council, including Harris, ordered the demolition of the entire fire torn Washington St. structure, part of which people had been working on every day since the fire in the belief it could be renovated.

It's being razed to make way for a parking structure even though the new plan for mass transportation means there will be no long range need for it as people depend less and less on the automobile. Richard Berger of Ann Arbor Tomorrow, an organization dedicated to building up the Central Business District admits that even existing parking structures may be torn down.

After the Dec. 15 fire at the Community Center it became apparent that the front of the building had to be torn down, but that the back, which had housed the People's Ballroom, could be repaired. So starting two days after the fire 20-30 people went down to start the giant cleanup project to get the Ballroom back into working order and to build the Tribal Council Committee offices in the area slated to be the Artists' Workshop before the fire.

The Monday after the fire, Tribal Council went to Council and asked the city to renegotiate the lease (which was held by the Community Center Coordinating Council, known as C-4) and give it to Tribal Council so it could get on with the renovation work. Then C-4 (whose offices of Drug Help, Ozone House & Free Clinic were totally burned out along with Tribal Council offices and who have been able to relocate and continue their crisis services) turned the lease for Washington St. structure back over the city. So Tribal Council went to City Council once again to underline the serious need for the Community Center & People's Ballroom because of the worsening hard drug problems and to ask again that the city renegotiate the lease and take an active role in combating the problems of young people by providing a better ballroom, big enough to support itself, along with the Tribal Council office space it had asked for before.

At that same council meeting, only hours after hearing about the serious problems in the community and the obvious solution of a Community Center and after Mayor Harris tried to get Genie Plamondon's promise to vacate the building in November without promising anything in return, Council decided to tear down the entire structure now. Republican Councilmen McCormick (up for re-election in the 5th Ward) even tried to insist the city had absolutely no responsibility to find another building for the Ballroom.

The Ballroom and Workshop areas on Washington St. weren't slated for demolition until next November, but since the City once again had control of the lease and had to tear down the front of the building anyway, it now says it's $1,000 cheaper to tear down both parts right now.

What's more, the city didn't allot the money to buy the property in the first place and now must sell a bond to pay off its debt to the Bank.

That leave us with no People's Ballroom and no Community Center. So we ask, what's next? Will the city provide a Tribal Council Community Center or would it rather see the problems in the community multiply until they become a thousand times more costly than any building the City could ever provide?

FEDS GET THEIR BUILDING -- PEOPLE GET THE SHAFT

City officials, local businessmen and some local realtors are all excited over the new site for the local fascist shrine, the Federal Building of Washtenaw County. The city will get $38,000/year in taxes from the building and merchants hope it will increase business. Certain local realtors who participated in the downtown land grab that had competing realtors speculating on the Building site and buying up corresponding property are happy because their gamble paid off.

So now the Eberbach building, the Varsity Laundry and the Masonic Temple, all perfectly good buildings that could have been put to use by the people for Community Centers or a People's Ballroom will be razed in favor of a $5 million monstrosity that will almost take up the entire block bounded by Liberty, 4th & 5th Avenue.

There were other sites considered like the burned out & razed corner of Main & Huron next to the Greyhound Bus Station or the infamous Ann St. block, but the government had to choose the site (or was made to see how profitable it would be to choose a site) that already had useful existing structures.

The building will be constructed by private developers and will be leased to the Feds for 20 years after which they'll buy it.

So everyone is happy but the people of Ann Arbor, as one more huge ugly place of wierdo architecture goes up to join buildings like the County Building, City Hall and Bell Telephone that already mar downtown.