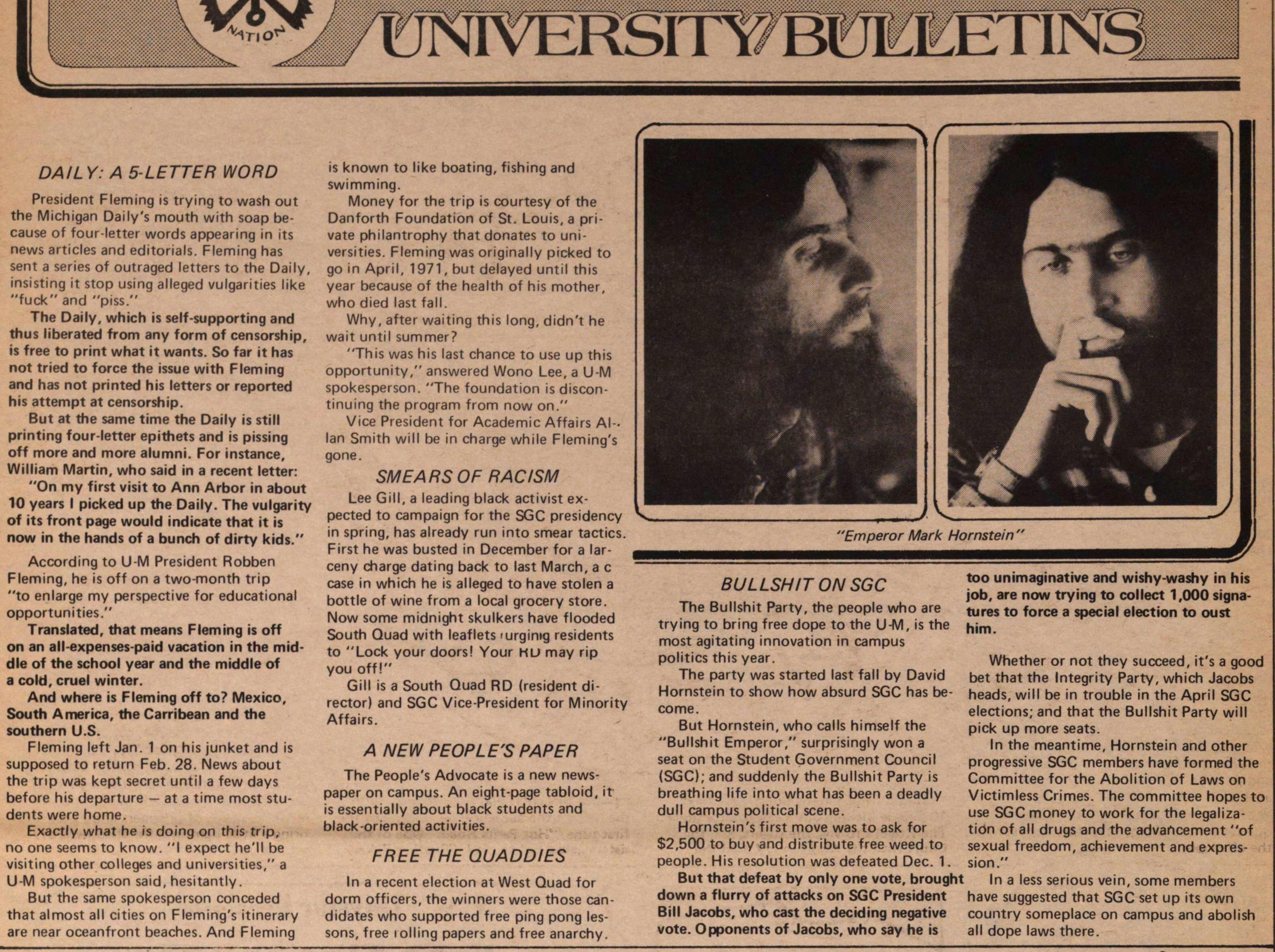 DAL Y: A LETTER WORD President Fleming is trying to wash out the Michigan Daily's mouth with soap because of four-letter words appearing in its news articles and editorials. Fleming has sent a series of outraged letters to the Daily, nsisting it stop using alleged vulgarities like "fuck" and "piss." The Daily, which is selfsupporting and thus liberated from any form of censorship, is free to print what it wants. So far it has not tried to f orce the issue with Fleming and has not printed his letters or reported his attempt at censorship. But at the same time the Daily is still printing four-letter epithets and is pissing off more and more alumni. For instance, William Martin, who said in a recent letter: "On my first visit to Ann Arbor in about 10 years I picked up the Daily. The vulgarity of its front page would indícate that it is now in the hands of a bunch of dirty kids." According to U-M President Robben Fleming, he is off on a two-month trip "to enlarge my perspective for educational opportunities." Translated, that means Fleming is off on an all expenses-paid vacation in the middle of the school year and the middle of a cold, cruel winter. And where is Fleming off to? Mexico, South America, the Carribean and the southern U.S. Fleming left Jan. 1 on his junket and is supposed to return Feb. 28. News about the trip was kept secret until a few days before his departure - at a time most students were home. Exactly what he is doing on this trip, no one seems to know. "I expect he'll be visiting other colleges and universities," a U-M spokesperson said, hesitantly. But the same spokesperson conceded that almost all cities on Fleming's itinerary are near oceanfront beaches. And Fleming is known to like boating, fishing and swimming. Money for the trip is courtesy of the Danforth Foundation of St. Louis, a private philantrophy that donates to universities. Fleming was originally picked to go in April, 1971, but delayed until this year because of the health of his mother, who died last fall. Why, after waiting this long, didn't he wait until summer? "This was his last chance to use up this opportunity," answered Wono Lee, a U-M spokesperson. "The foundation isdiscontinuing the program from now on." Vice President for Academie Affairs Alian Smith will be in charge while Fleming's gone. SMEARSOF RACISM Lee Gilt, a leading black activist expected to campaign for the SGC presidency in spring, has already run into smear tactics. First he was busted in December for a ( ceny charge dating back to last March, a c case in which he is alleged to have stolen a bottle of wine from a local grocery store. Now some midnight skulkers have flooded South Quad with leaflets 'urginig residents to "Lock your doors! Your Hu may rip you off!" Gill is a South Quad RD (resident director) and SGC Vice-President for Minority Affairs. A NEW PEOPLE'S PAPER The People's Advocate is a new newspaper on campus. An eight-page tabloid, t is essentially about black students and black -oriented activities. FREE THE QUADDES In a recent election at West Quad for dorm officers, the winners were those candidates who supported free ping pong lessons, free lolling papers and free anarchy. BULLSHITONSGC The Bullshit Party, the people who are trying to bring free dope to the U-M, s the most agitating innovation in campus politics this year. The party was started last fall by David Hornstein to show how absurd SGC has become. But Hornstein, who calis himself the "Bullshit Emperor," surprisingly won a seat on the Student Government Council (SGC); and suddenly the Bullshit Party is breathing life into what has been a deadly dull campus political scène. Hornstein's first move was to ask for $2,500 to buy and distribute free weed to people. His resolution was defeated Dec. 1 . But that defeat by only one vote, brought down a f lurry of attacks on SGC President Bill Jacobs, who cast the deciding negative vote. Opponents of Jacobs, who say he is too unimaginative and wishy-washy n his job, are now trying to collect 1,000 signatures to forcé a special election to oust him. Whether or not they succeed, t's a good bet that the Integrity Party, which Jacobs heads, will be in trouble n the April SGC elections; and that the Bullshi't Party will pick up more seats. In the meantime, Hornstein and other Progressive SGC members have formed the Committee for the Abolition of Laws on Victimless Crimes. The committee hopes to use SGC money to work for the legalization of all drugs and the advancement "of sexual freedom, achievement and expression." In a less serious vein, some members have suggested that SGC set up its own country someplace on campus and abolish all dope laws there.