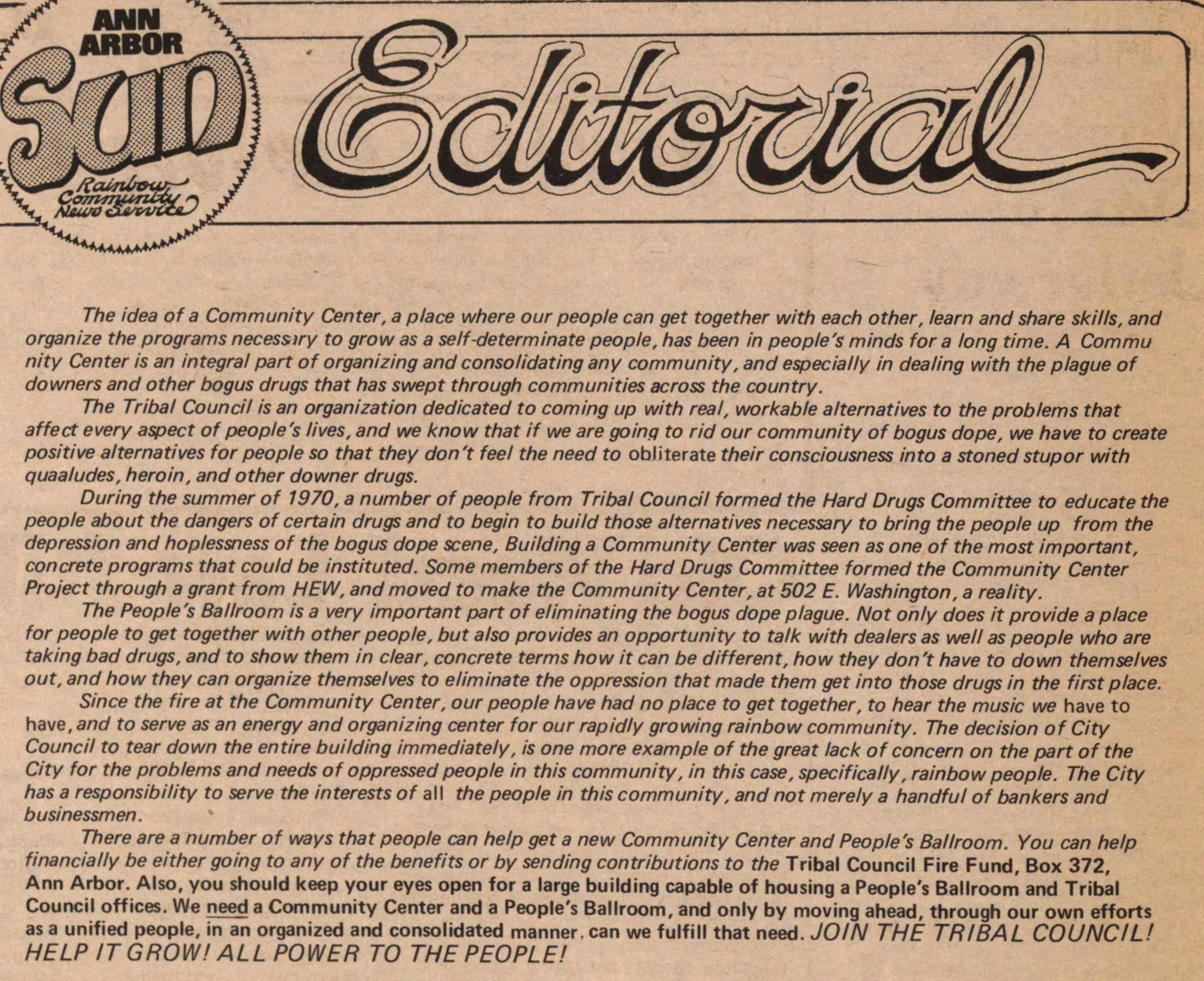 The idea of a Community Center, a place where our people can get together with each other, learn and share skills, and organize the programs necessary to grow as a self-determinate people, has been in people’s minds for a long time. A Community Center is an integral part of organizing and consolidating any community, and especially in dealing with the plague of downers and other bogus drugs.

The Tribal Council is an organization dedicated to coming up with real, workable alternatives to the problems that affect every aspect of people’s lives, and we know that if we are going to rid our community of bogus dope, we have to create positive alternatives for people so that they don’t feel the need to obliterate their consciousness into a stoned stupor with Quaaludes, heroin, and other downer drugs.

During the Summer of 1970, a number of people from Tribal Council formed the Hard Drugs Committee to educate the people about the dangers of certain drugs and to begin to build those alternatives necessary to bring the people up from the depression and hopelessness of the bogus dope scene. Building a Community Center was seen as one of the most important, concrete programs that could be instituted. Some members of the hard drugs committee formed the Community Center Project through a grant from HEW, and moved to make the Community Center, at 502 E. Washington, a reality.

The People’s Ballroom is a very important part of eliminating the bogus dope plague. Not only does it provide a place for people to get together with other people, but also provides an opportunity to talk with dealers as well as people who are taking bad drugs, and to show them in clear, concrete terms how it can be different, how they don’t have to down themselves out, and how they can organize themselves to eliminate the oppression that made them get into those drugs in the first place.

Since the fire at the Community Center, our people have had no place to get together, to hear the music we have to have, and to serve as an energy and organizing center for our rapidly growing rainbow community. The decision of City Council to tear down the entire building immediately, is one more example of the great lack of concern on the part of the City for problems and needs of oppressed people in this community, in this case, specifically, rainbow people. The City has a responsibility to serve the interests of all the people in this community, and not merely a handful of bankers and businessmen.

There are a number of ways that people can help get a new Community Center and People’s Ballroom. You can help financially by either going to any of the benefits or by sending contributions to the Tribal Council Fire Fund, Box 372, Ann Arbor. Also, you should keep your eyes open for a large building capable of housing a People’s Ballroom and Tribal Council offices. We need a Community Center and a People’s Ballroom, and only by moving ahead, through our own efforts as a unified people, in an organized and consolidated manner, can we fulfill that need. JOIN THE TRIBAL COUNCIL! HELP IT GROW! ALL POWER TO THE PEOPLE!